Six-and-a-half years after the Great Recession began — and five years after it officially ended — the U.S. has finally surpassed its precrisis employment peak. But the job market is far from fully healed.

U.S. employers added 217,000 jobs in May, bringing total non-farm employment to 138.5 million — 113,000 more than the 138.4 million jobs that existed in December 2007, the first month of the recession. It took 76 months to regain the nearly 9 million jobs lost in the recession, making this by far the slowest jobs recovery since World War II.1 (If any of this sounds familiar, you’re right: Private-sector employment returned to its prerecession peak in March.) 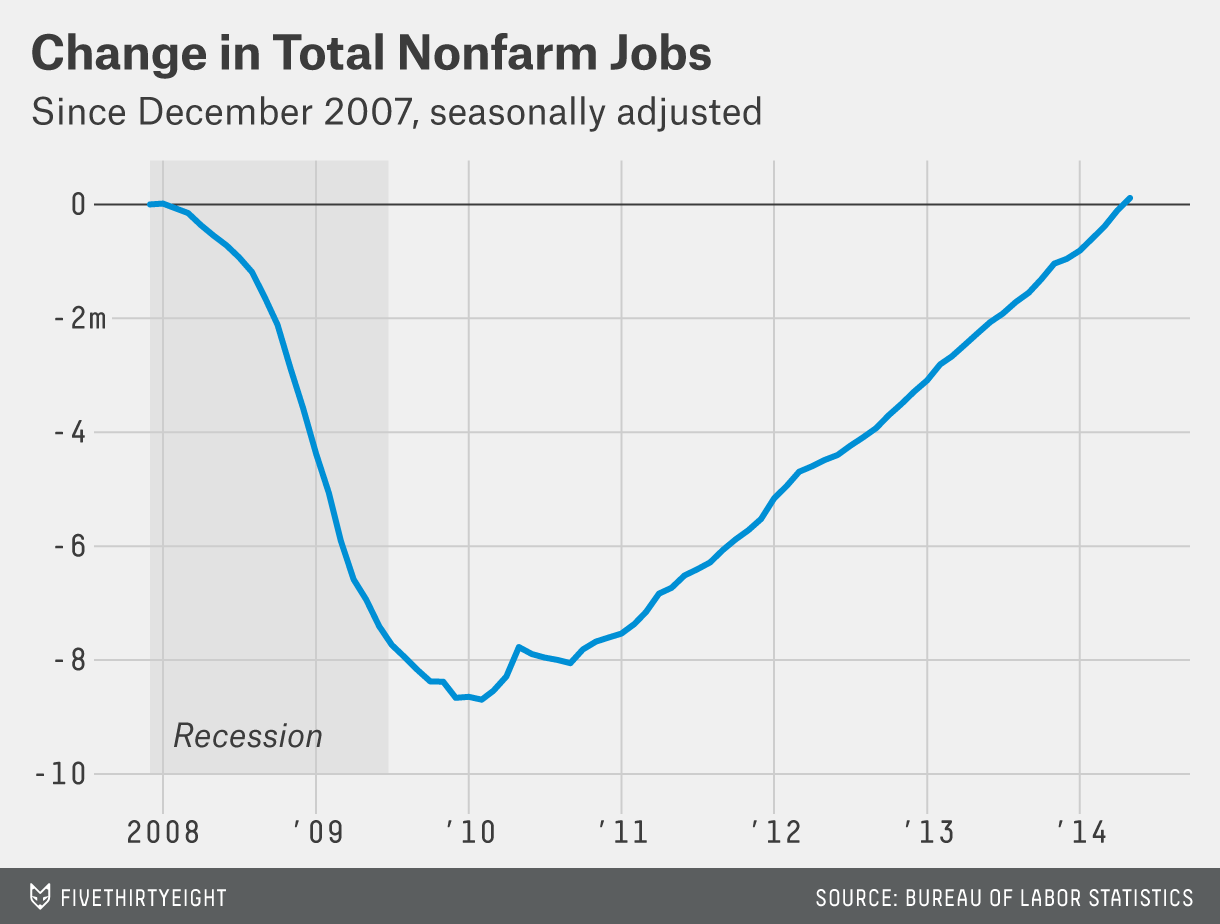 Getting back to square one isn’t much to celebrate, however. There are more than 6 million more working-age Americans2 today than when the recession began. Adjusting for population growth, we’re still millions of jobs short of where we were 6½ years ago — and have seen hardly any jobs recovery.3 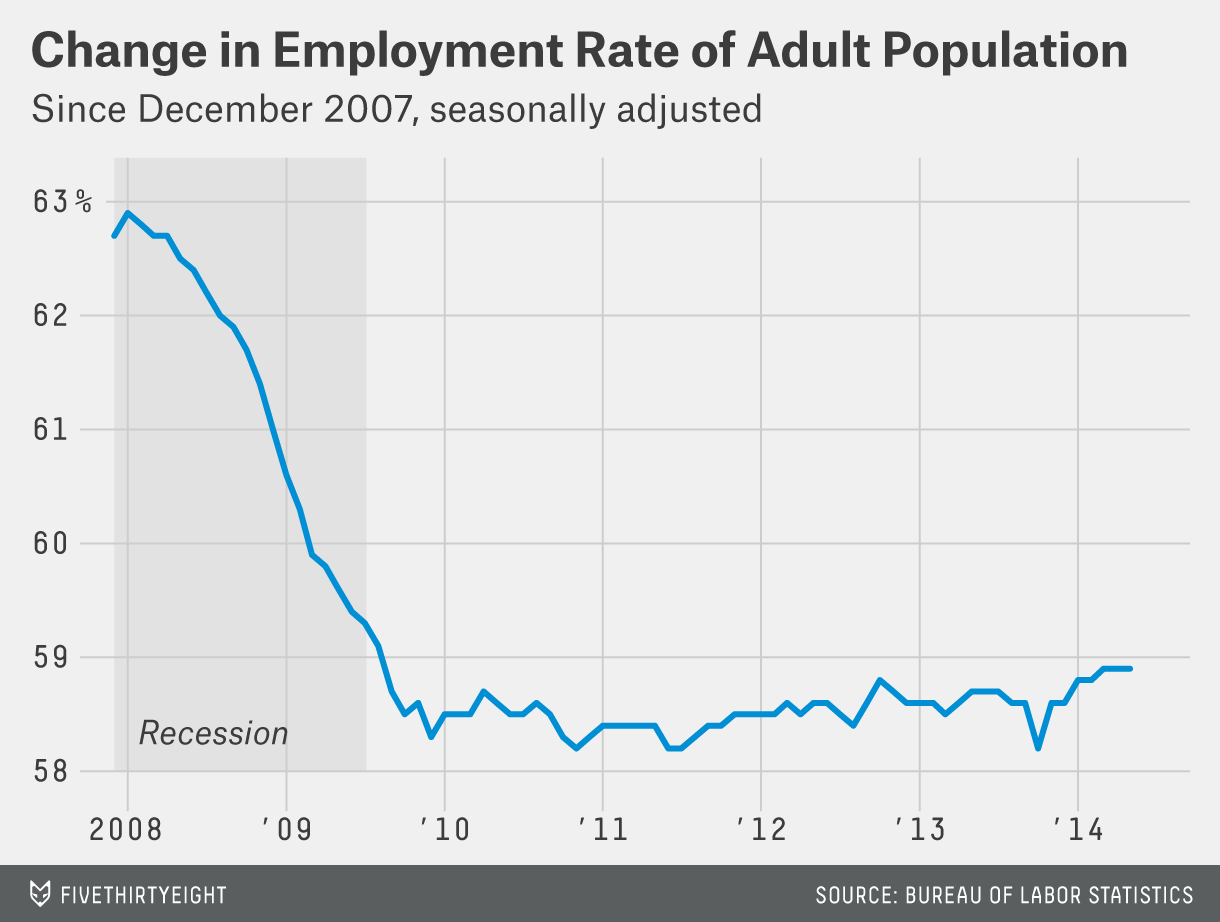 That chart makes things look worse than they are. The aging of the population would have pushed down the overall employment rate even without the recession. But even controlling for demographics, the trend has been grim. Young people have been hit especially hard, but so-call prime-age workers — those between ages 25 and 54 — have also seen a big drop in their rate of employment since the recession began. Older workers, meanwhile, have held onto jobs.4

Moreover, while employment has, at last, returned to precrisis levels, unemployment isn’t even close. There are still nearly 10 million unemployed workers in the U.S., more than a third of whom have been out of work for more than six months. The good news is that the ranks of the unemployed are no longer growing: Layoffs are back to normal, and short-term unemployment has returned to its prerecession level. But long-term unemployment remains a crisis: There are 2 million more long-term jobseekers today than when the recession began. What’s worse, their prospects have hardly improved in the recovery: Barely one in 10 find jobs each month, and few of those jobs prove stable. 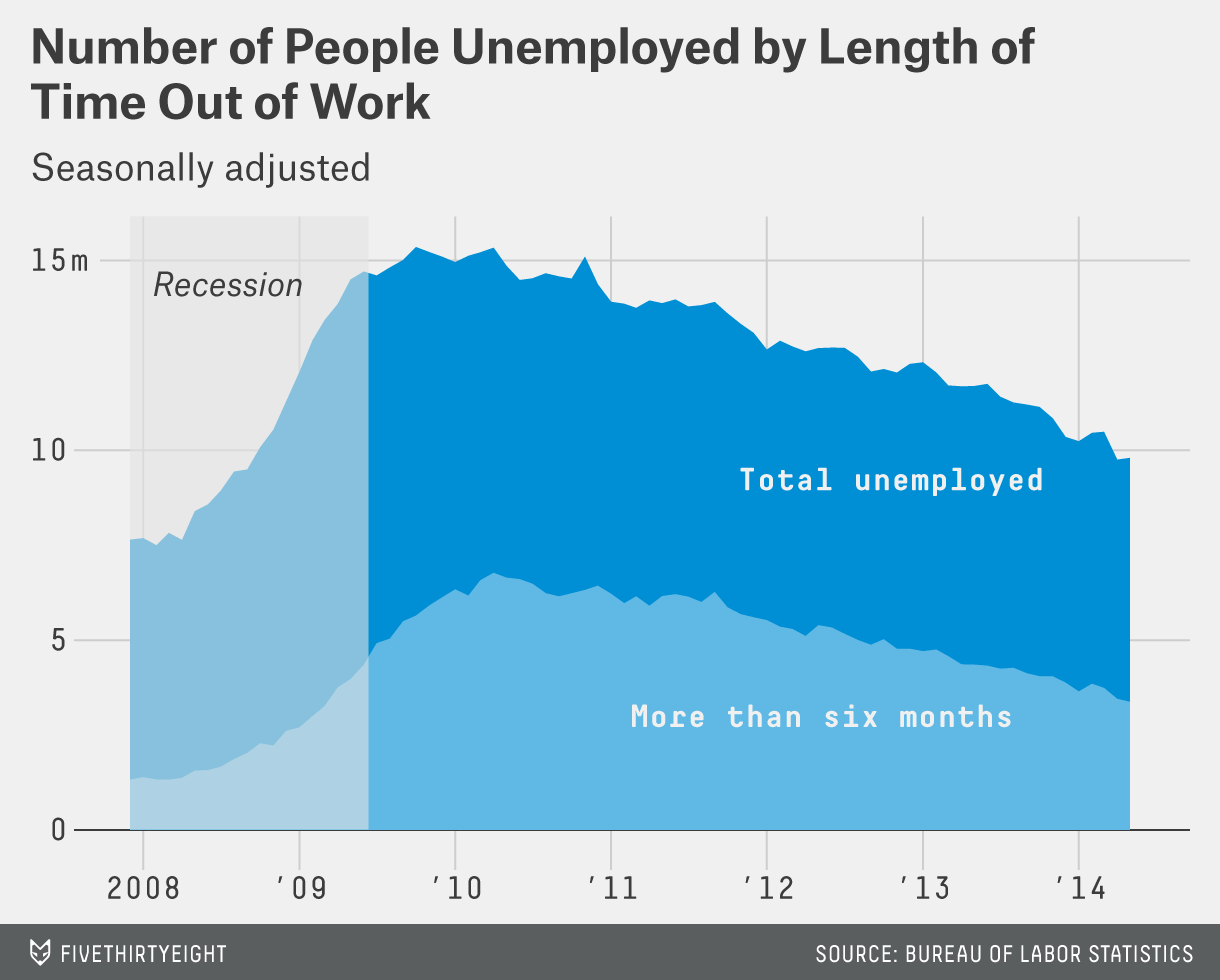 The recession and slow recovery have been harder on some groups than on others. Women fared better than men in terms of employment, in part because they were less likely to work in sectors such as construction and manufacturing that were particularly hard-hit in the downturn. Men have experienced a stronger rebound in the recovery, but only slightly. As a result, women returned to prerecession levels of employment last summer, while men remain hundreds of thousands of jobs in the hole. 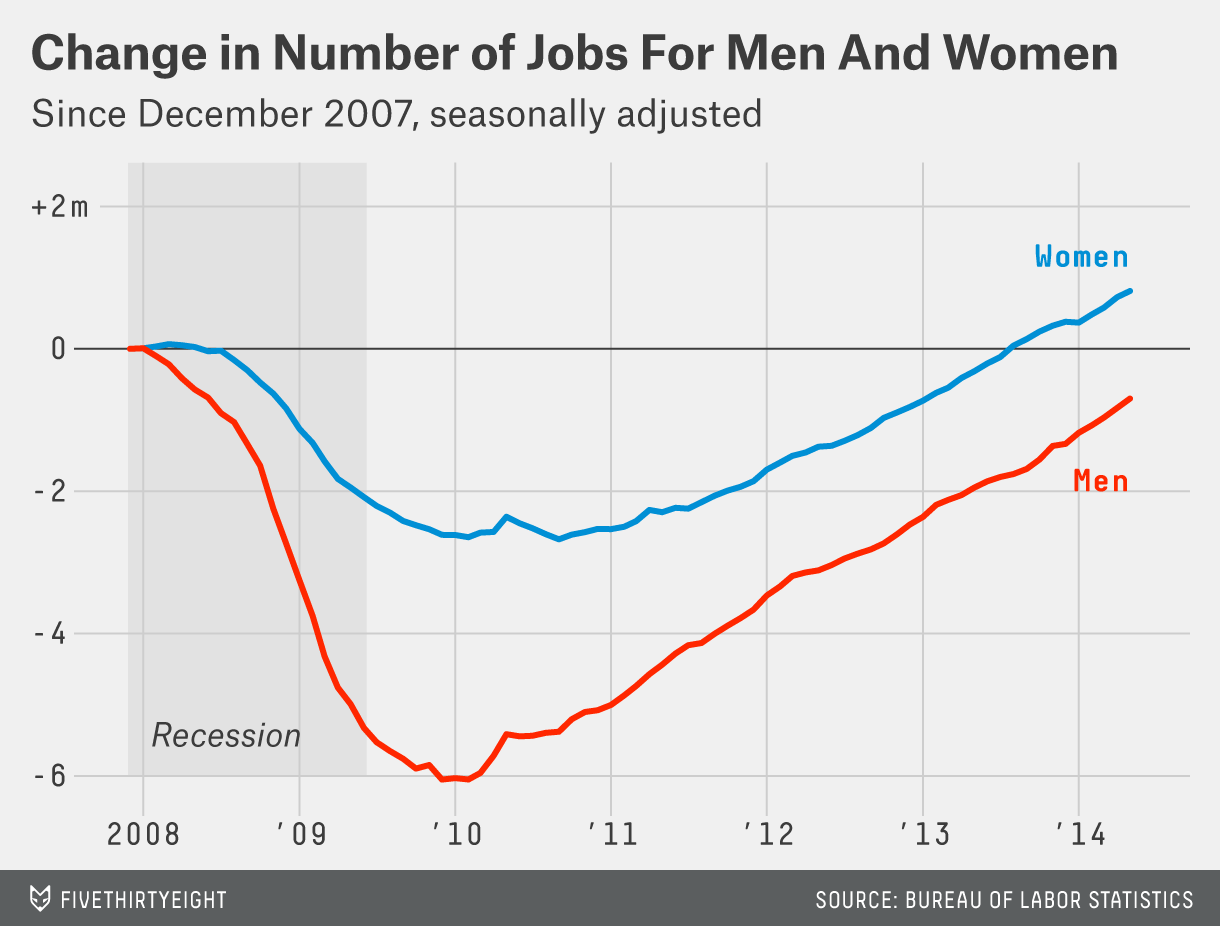 Earnings, meanwhile, have been stagnant. In fact, after adjusting for inflation, average hourly wages are lower now than when the recession ended. Weekly wages haven’t done much better, in part because companies aren’t increasing employees’ hours.6 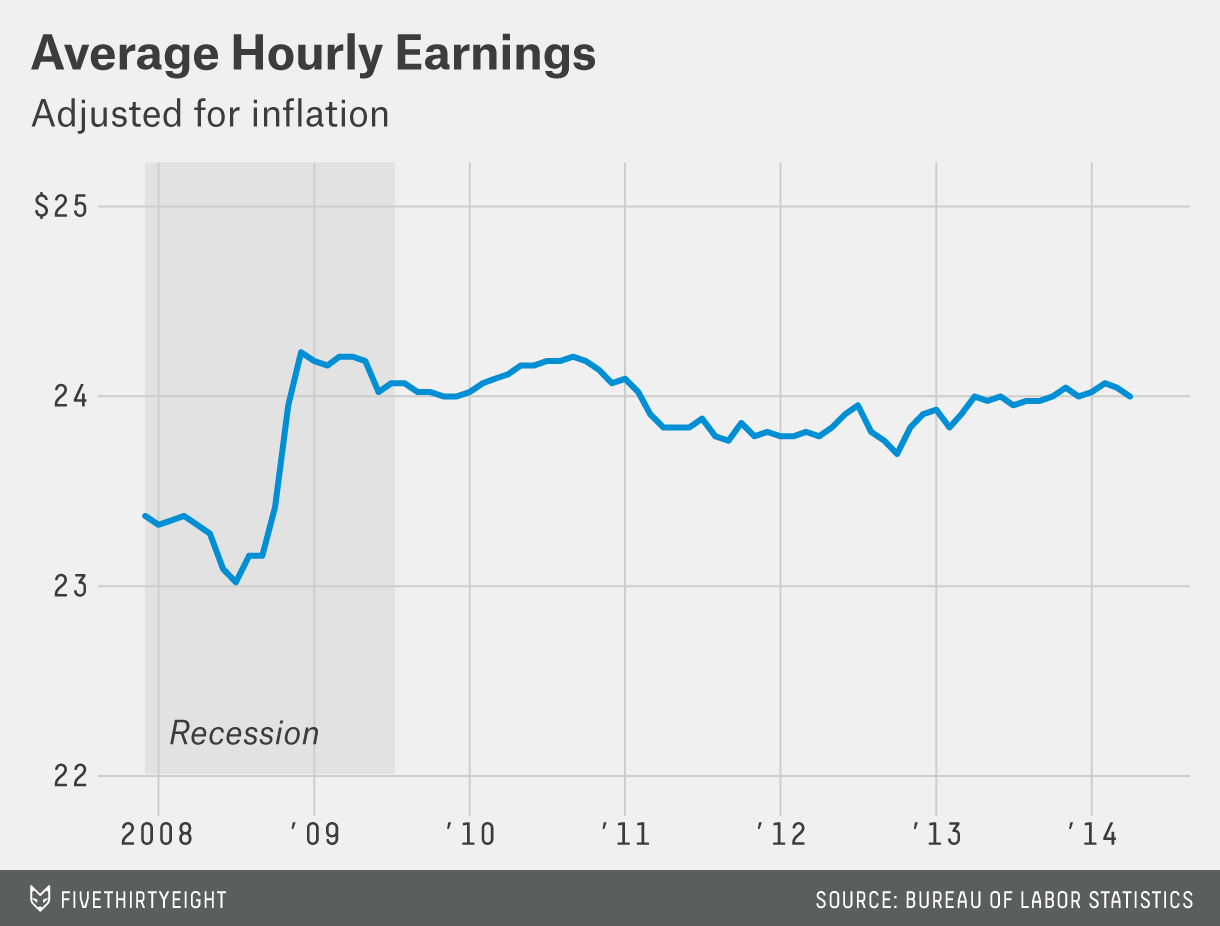 One reason that wages and hours have been so slow to rebound is that many of the jobs that have been added in recent years have been in industries like retail and food-service, which employ lots of part-timers and low-wage workers. Meanwhile, industries that provide middle-class jobs, such as construction and manufacturing, have been slow to recover. There are exceptions. Health care has been a consistent driver of job growth in both the recession and recovery. The oil and gas sector has seen huge gains due to the fracking boom, although it makes up only a tiny fraction of overall employment. 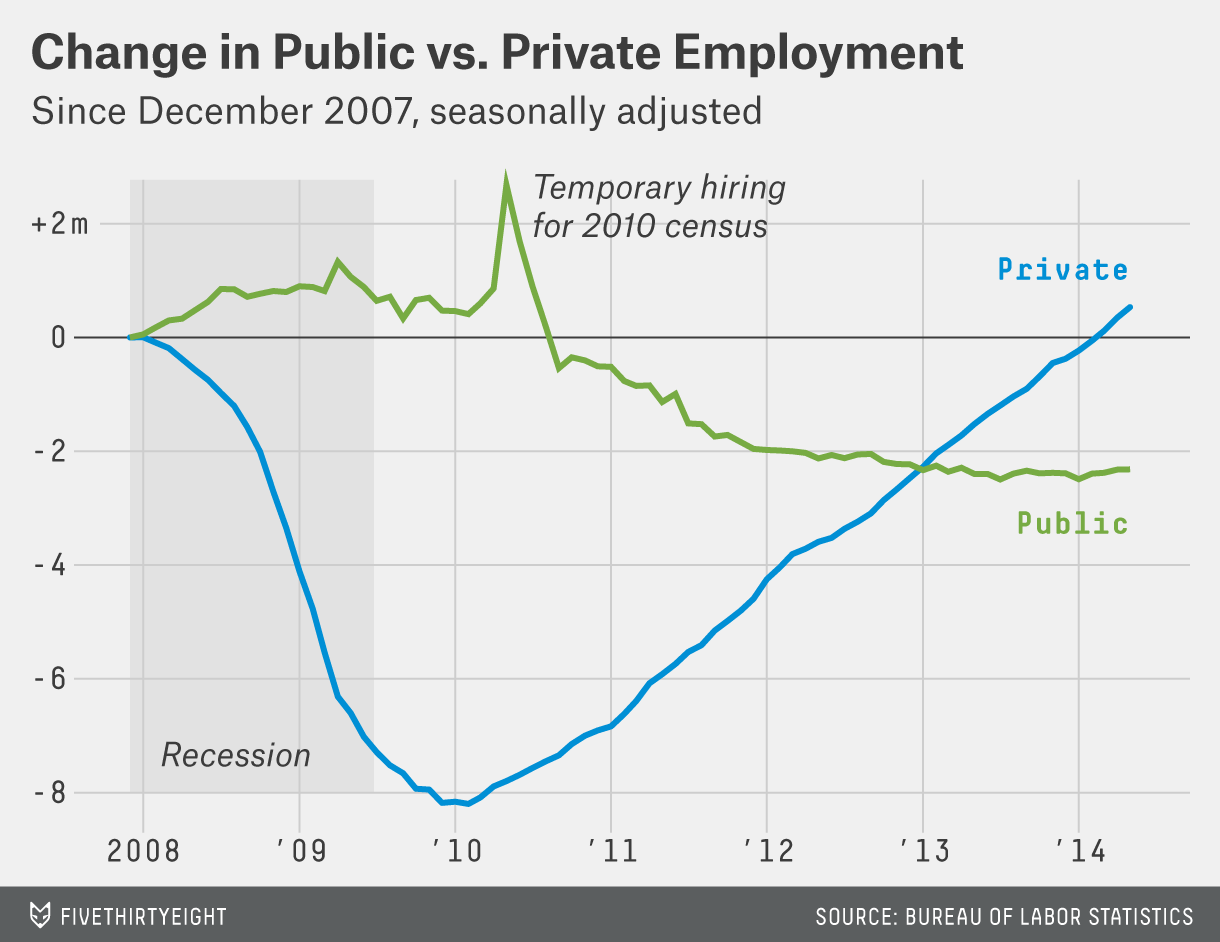