Don’t let the UConn women’s one-loss record fool you: The Huskies are the most dominant college basketball team on Earth. Aside from that two-point November loss to Stanford, the Huskies have won every game they’ve played by double digits — since March 12, 2013. In that period, they’re 83-1 with an average margin of victory of 38 points.

On Tuesday night, those Huskies take on the Notre Dame Fighting Irish, with the NCAA women’s basketball national championship up for grabs. The UConn team features three freshmen and eight players returning from last year’s championship squad, five of whom are looking for the three-peat. And let’s just say, they have a pretty good chance.

Their biggest star and leading scorer is forward Breanna Stewart, a 6-foot-4-inch junior who, in addition to having already won the NCAA player of the year award as a sophomore, averages 1.9 steals and 2.6 blocks per 36 minutes.1 Senior Kaleena Mosqueda-Lewis — the only player other than Stewart to start for both title teams — has a whopping 68.4 effective field goal percentage2 (good for second-highest of 1,827 qualifying players). This may be due to her nation-leading 50 percent shooting from 3-point range — on 6.6 attempts per game.3 Even the Huskies’ “role-players” get it right — like Kiah Stokes, a senior non-starter who averages only 4.5 points in 18.6 minutes per game but makes those minutes count by averaging 7.5 blocks and 13.3 rebounds per 36. 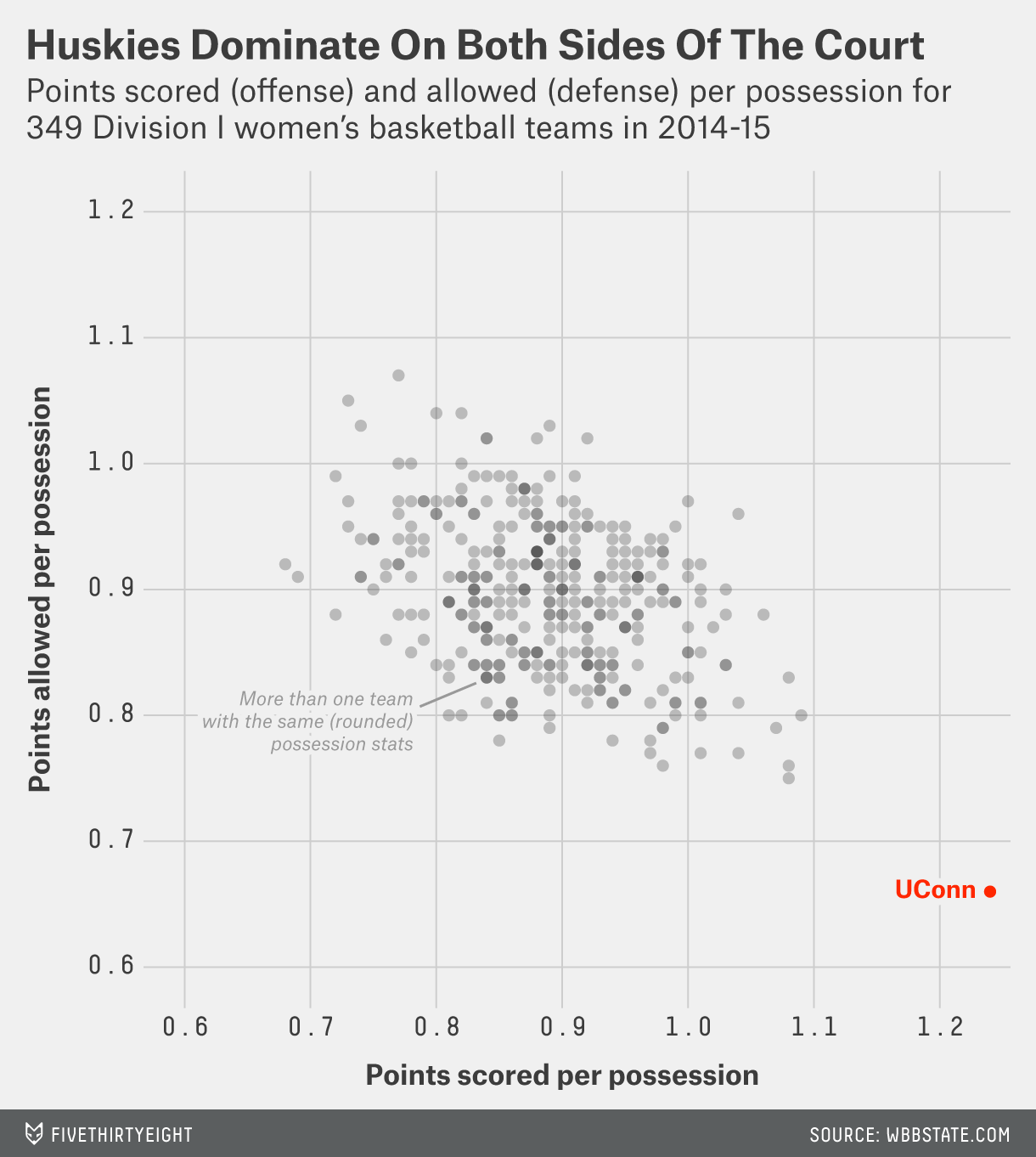 That cloud in the middle is the other 348 NCAA women’s basketball teams. Teams want to be on the lower-right of the plot, and if you look deep in the lower-right area, you may be able to find Connecticut (highlighted in red so that you don’t mistake it for a flea on your monitor). Yes, that means UConn has — by far — the best offense in the country (even though many of its competitors play in weaker conferences), as well as — by far — the best defense in the country.

On average, every trip up and down the floor nets the Huskies more than half a point (0.58 points on average). That’s an insane reciprocal advantage. The next-best are Princeton (who went undefeated in the Ivy League), South Carolina and Notre Dame at +0.33, +0.32 and +0.29 points per possessions exchanged, respectively.

We can line up each team’s reciprocal advantage from worst to best like so:4 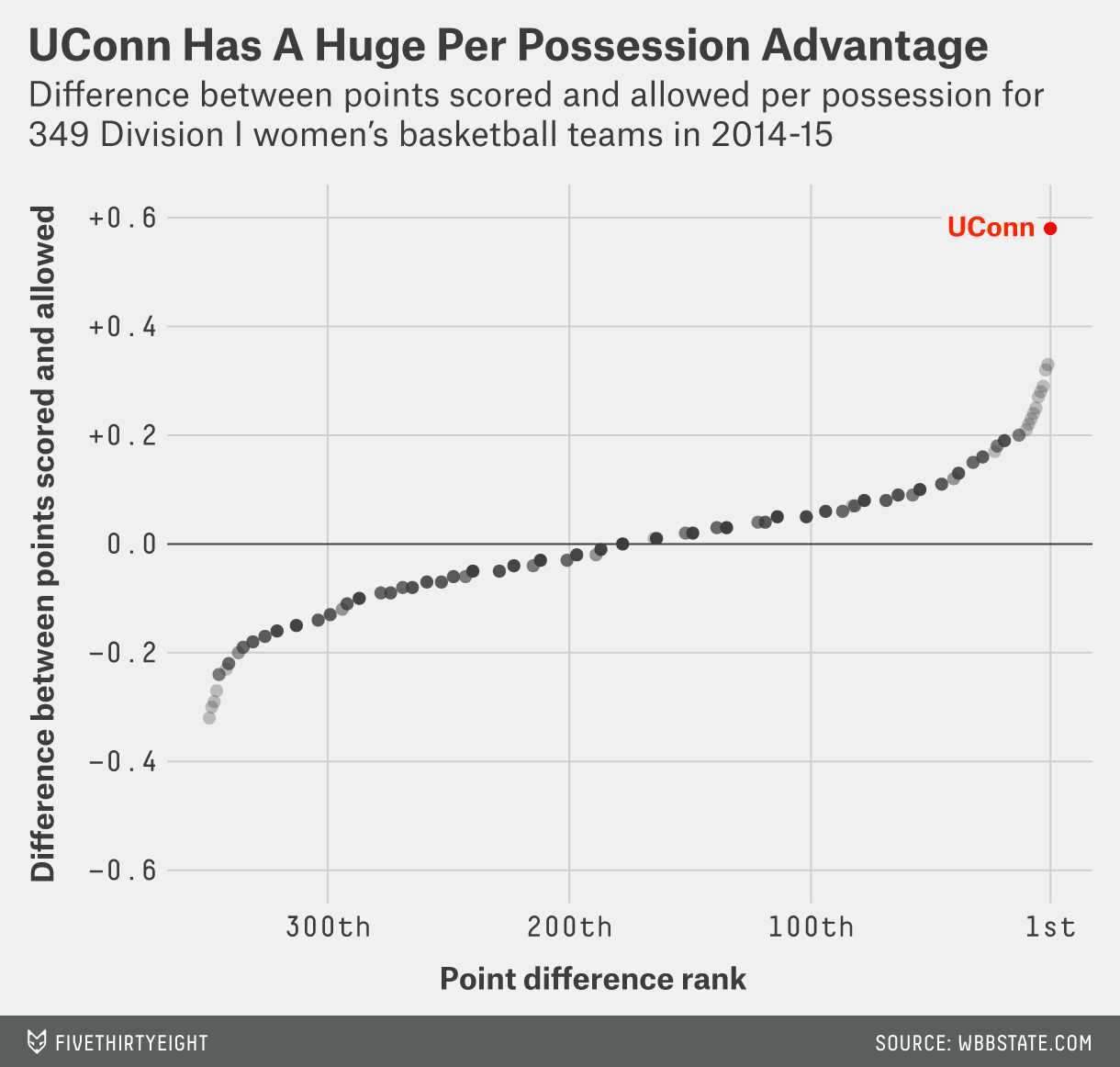 This kind of sideways/backwards S-shape distribution is common in sports, and you can see how the vertical distances between points get larger on the ends. This is one reason that great players and teams seem so amazing.

A few more fun facts before we look at the bigger picture:

Oh, and the Huskies managed to win by scores in the form of 80-something to 20-something (their 87-24 romp over Memphis, for example) four times.

Of course, college basketball seasons are only 40ish games (including tournaments) long, which is less than half of an NBA season. So perhaps this year’s Connecticut team is just having the run of its life.

This is at least partially true. The 2014-15 Huskies are an anomaly among anomalies — this year’s squad has been more efficient both offensively and defensively than either of their championship-winning predecessors (including last year’s unbeaten team). But, taken together, this three-year run is even more amazing. If you thought Connecticut’s 2015 offense/defense chart was crazy, here’s something crazier: 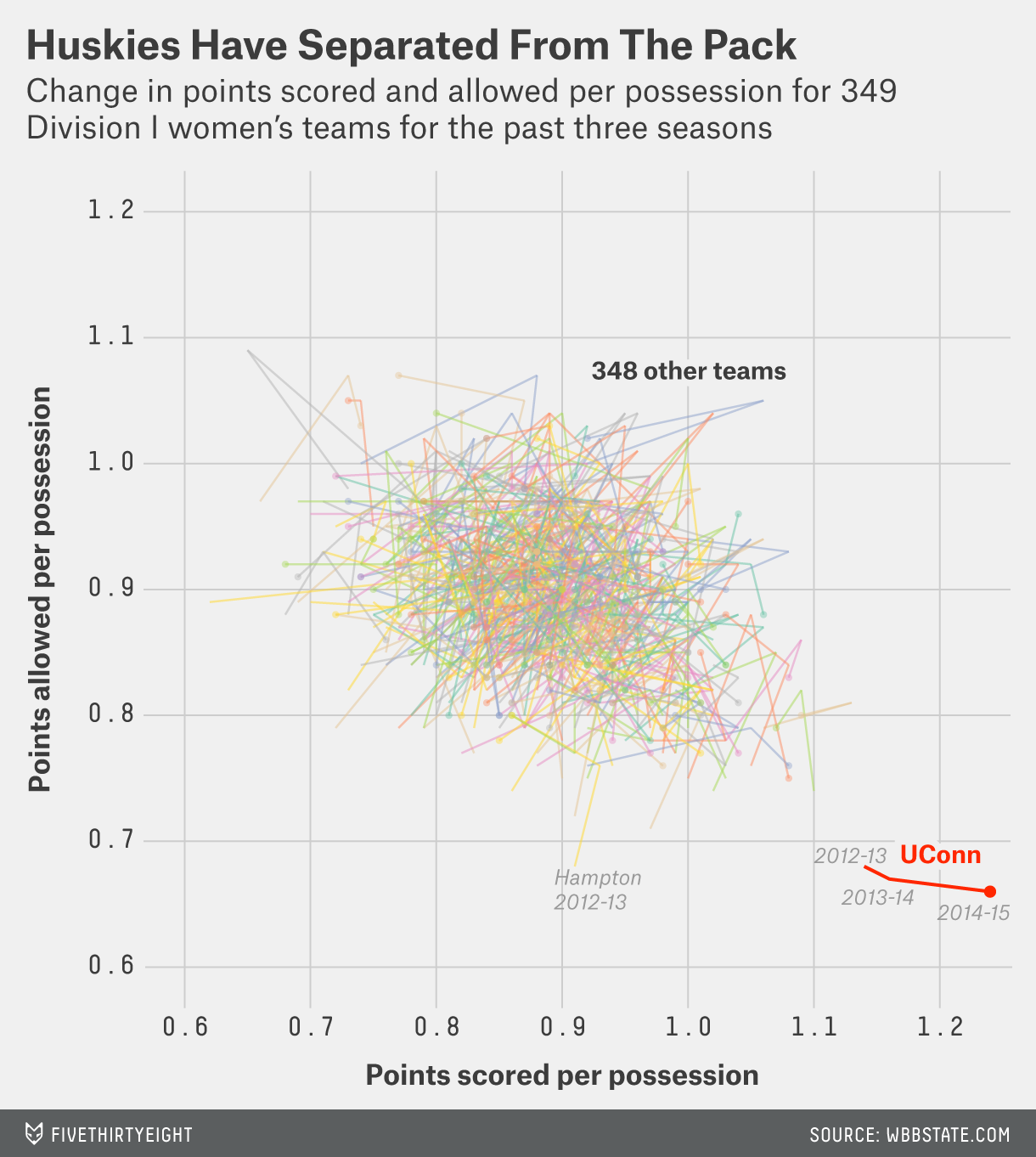 Each V-shaped line in that tangle shows a team’s three-year performance on offense and defense. The side with a dot is how the team did in 2014-15, the “kink” in the middle is how it did in 2013-14, and the open end is how it did in 2012-13. At the center of the chart, note the chaotic 348-team jumble — if you can’t find, say, McNeese State, that’s the point. Most teams vary a lot from year to year. And when a team strays very far from the league’s center of gravity, it is likely to come crashing back.

Except UConn. Once again, while it may look like someone accidentally took a red Sharpie to your monitor, that little red brush stroke is actually the Huskies. And not only are they nowhere near the pack, they appear to be running away from it.

Indeed, each of UConn’s points scored per possession in the past three seasons is higher than any other team’s, which means that the other teams had a combined 1,044 chances to match UConn’s worst offensive season, and none could. Similarly, no other team has ceded fewer points per possession over a season than UConn’s 0.68 in 2012-13 — its worst season of the past three by this metric (though kudos to Hampton for matching it).

Connecticut’s three-year performance is impressive not only for being extreme, but also for being extremely consistent. Sure, this year’s squad had even better efficiency stats than the previous two, but way out in space like that, such distinctions mean little. Some of their statistical improvement in the past two years may stem from their 2013 move from the Big East conference into the weaker American Athletic Conference. For example, my homebrew-version of SRS (Simple Rating System) — a stat that adjusts team strength to account for strength of schedule — slightly prefers the 2012-13 squad.5 But because UConn is so good and its games are often decided by halftime or earlier, exactly how much it’s going to dominate is practically a coaches’ decision. (My colleague Carl Bialik found that its average lead at the half this year was 25 points.)

So instead of looking at fancy small-scale possession-based stats and the like, let’s step back and look at the big picture. Here are the basic cumulative tallies of UConn’s points scored and points allowed after each game for the past three years: 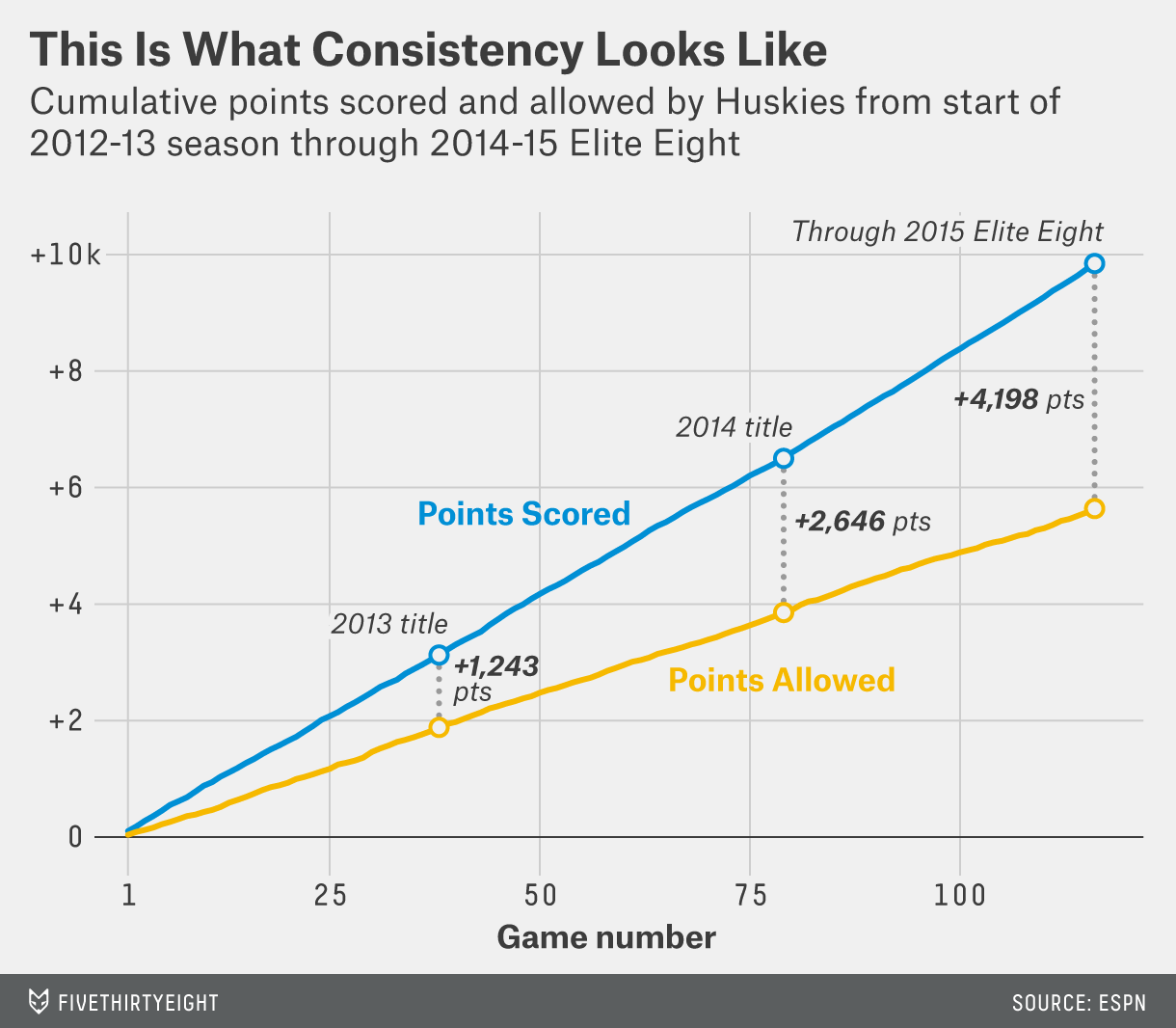 The dots represent where the Huskies stood after winning each championship. If you look incredibly carefully, it looks like the yellow “defense” line trends downward a tiny bit this year, but for the most part, it’s pretty remarkable how flat each is and how constant the ratio between the two lines is. Note that those lines don’t represent trends or a local regression or anything fancy — only consistency.

And this is nothing new during coach Geno Auriemma’s reign. Whether it’s his schemes, his managerial style, his training or just his uncanny ability to recruit (or poach) all the best female basketballers to the Nutmeg State, Auriemma is on the threshold of yet another amazing accomplishment.

It’s hard to believe that the great Geno toiled with this program for 10 years before it even sniffed a chance at a championship in 1995. But since then, wow. Connecticut has reached nine NCAA tournament finals and has won each time. This year gives Auriemma the chance to match John Wooden’s 10 national championships.6 And to get there, all the Huskies need to do is beat archrival Notre Dame.

In this season’s only meeting between the two, the Huskies beat the Fighting Irish in South Bend by (a mere) 18 points. But while Connecticut has lost only five games in the past three seasons, three were against Notre Dame — all in early 2013. Unfortunately for Notre Dame, the fourth time was the charm that year, as the Huskies beat the Fighting Irish in the Final Four en route to the title. They’ll have to take down a juggernaut to return the favor.