In a few months, after Iowa and New Hampshire begin to winnow the field, the GOP nomination race could boil down to an epic final between a candidate with a more pragmatic image, such as Marco Rubio, Carly Fiorina or Jeb Bush, and a more conservative one, such as Ted Cruz, Ben Carson or Donald Trump.1

If that happens, the moderate finalist — like Mitt Romney and John McCain before him or her — will have a hidden structural advantage: the party’s delegate math and geography.

There are plenty of reasons to be cautious of national polls that show Trump and Carson leading. They may fail to screen out casual voters, for instance, and leaders at this point in past years have eventually tanked. But perhaps the biggest reason to ditch stock in these polls is that they’re simulating a national vote that will never take place.

In reality, the GOP nominating contest will be decided by an intricate, state-by-state slog for the 2,472 delegates at stake between February and June. And thanks to the Republican National Committee’s allocation rules, the votes of “Blue Zone” Republicans — the more moderate GOP primary voters who live in Democratic-leaning states and congressional districts — could weigh more than those of more conservative voters who live in deeply red zones. Put another way: The Republican voters who will have little to no sway in the general election could have some of the most sway in the primary.

As The New York Times’ Nate Cohn astutely observed in January, Republicans in blue states hold surprising power in the GOP presidential primary process even though they are “all but extinct in Washington, since their candidates lose general elections to Democrats.” This explains why Republicans have selected relatively moderate presidential nominees while the party’s members in Congress have continued to veer right.

The key to this pattern: “Blue-state Republicans are less religious, more moderate and less rural than their red-state counterparts,” Cohn concluded after crunching Pew Research survey data. By Cohn’s math, Republicans in states that Obama won in 2012 were 15 percentage points likelier to support Romney in the 2012 primary and 9 points likelier to support McCain in 2008 than their red-state compatriots. Romney and McCain’s advantage in blue states made it “all but impossible for their more conservative challengers to win the nomination,” Cohn wrote.

But their real mojo lurks in the delegate chase. The electorate that nominates GOP presidential candidates is much bluer than the ones that nominate other GOP officials, a distinction that is almost impossible to overstate. Look at where the Republican Party lives: Only 11 of 54 GOP senators and 26 of 247 GOP representatives hail from Obama-won locales, but there are 1,247 delegates at stake in Obama-won states, compared with just 1,166 in Romney states.

What’s more, an imbalance lies in a nuance of the RNC’s delegate allocation. Although it can be a byzantine process, here are the basics: The RNC allows state parties some leeway in how to award delegates to candidates. In a few states, including Florida, Ohio and Arizona, the primary winner wins all the state’s delegates. In most others, delegates are allocated either proportionally to votes or by the winner in each congressional district.

A total of 832 delegates (about 34 percent of all 2,472 delegates) spanning 23 states will be awarded based on results at the congressional district level. Here’s the catch: According to the RNC’s allotment rules, three delegates are at stake in each district, regardless of the partisan lopsidedness of the seat. This creates a “rotten boroughs” phenomenon in which Blue Zone Republicans’ votes can be disproportionately valuable.

For example, three delegates are up for grabs in New York’s heavily Latino, Bronx-based 15th District, which cast just 5,315 votes for Romney in 2012. But there are also three delegates at stake in Alabama’s 6th District, which covers Birmingham’s whitest suburbs and gave Romney 233,803 votes. In other words, a GOP primary vote cast in the bluest part of the Bronx could be worth 43 times more than a vote cast in the reddest part of Alabama. 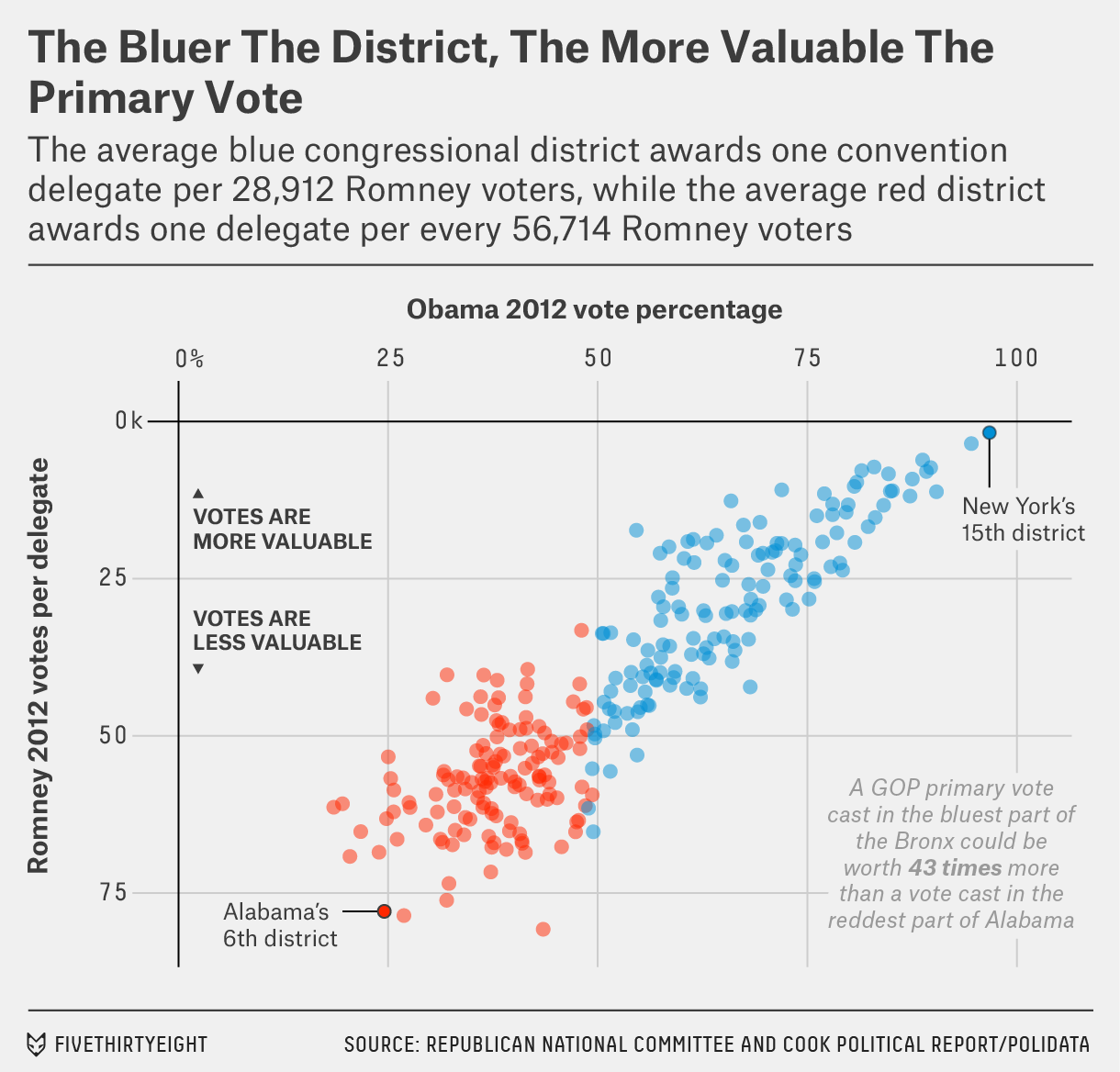 The average blue district awards one convention delegate per 28,912 Romney voters, while the average red district awards one delegate per every 56,714 Romney voters. Thanks to this disparity, if a hard-right candidate like Cruz dominates deeply red Southern districts in the SEC primary, a more electable candidate like Rubio could quickly erase that deficit by quietly piling up smaller raw-vote wins in more liberal urban and coastal districts.

The RNC partially compensates for this imbalance in the way it awards delegates on a statewide basis. Republicans award “bonus” delegates to states with lots of GOP officeholders and states with the best GOP performance in the last election. For example, despite both states having nine congressional districts, Tennessee will send 58 delegates to the Cleveland convention while Massachusetts will send 42.

But the bigger boon to Rubio, Bush and other moderates is that the opinions of GOP voters in places like Massachusetts count at all in this process — in an era when the Bay State sends zero Republicans to Congress. It’s a huge factor that many pundits tend to overlook, and it’s why the temperament and qualities that the broader party looks for in a nominee differ so much from those of the loudest and most ideological Freedom Caucus types in Washington.

It’s not that national polls are skewed in favor of conservative, red-meat Republicans. It’s that the Republican Party’s delegate geography rewards their moderate rivals.

Check out our live coverage of the GOP debate.