Many astute political observers worry that an elegant resolution to the negotiations over the federal debt limit may not be in the making — and that there is a tangible possibility that the United States will default on its debts.

Personally, I’m wary of reading these tea leaves. When the Republican leader in the House, Eric Cantor of Virginia, walked away from the talks last week, was that a sign that the negotiations were on the brink of collapse? Or rather, did it show that Mr. Cantor and his Democratic counterparts had made substantial progress and that it was time to call John Boehner and Barack Obama in from the bullpen? This is not a situation where either word or deed should simply be taken at face value: everyone involved has an incentive to conceal his or her true intentions. It’s a bit like trying to predict the outcome of a poker hand without knowing the players’ hole cards.

I am worried for another reason. Many observers, including some who are optimistic about the ultimate outcome, think that distress in the bond, credit and equities markets will be necessary in order to motivate a solution. For instance, here’s Peter Orszag, Mr. Obama’s former budget director, as quoted in a CNN article:

“We won’t get to that kind of conceptual agreement until we get some kind of turbulence in the bond market,” said Orszag, who now works as a Citigroup vice chairman of global banking. He spoke at the Peter G. Peterson Institute for International Economics.

Orszag predicted that, perhaps as early as July, financial markets will start to seriously worry about the United States’ ability to pay its debts. He predicted the cost of making loans would jump between a quarter to half percentage point before congressional leaders get serious and reach a deal.

“That’s the kind of force that I think will be required in order to bring the parties together,” Orszag said.

The idea, basically, is that a little bit of market panic would be a good thing, inducing Congress and the president to reach a deal, which would in turn prevent a lot of market panic.

There’s some apparent precedent for this notion in the events of September 2008. When the Congress initially failed to pass a financial bailout program, the Dow Jones Industrial Average dropped 777 points in a single day, prompting Congress to relent and approve a slightly modified version of the original bill just 48 hours later.

But I worry that the logic of this scenario — in essence, counting on an orderly panic — may be intrinsically unsound. Once panic over the possibility of a default sets in, it may be hard to contain.

Let’s start by considering how the markets appear to be reacting right now to the potential for a default. The best indicator may be prices for credit default swaps, financial instruments which make it possible to bet that a particular creditor (like a country or a business) will default on its debts. The more likely a default appears, the more expensive it is to make such a bet. It costs about 2,200 basis points to buy credit default swaps on Greece right now, for example — as compared to just 28 basis points for Sweden.

Before the financial crisis took hold in 2008, the basis-point prices of credit default swaps on United States treasury notes — essentially, bets on a federal debt default — were generally in the single digits. These days they are an order of magnitude higher, and have risen by 35 percent over the past year. By contrast, over the same period, the prices for credit default swaps on Japanese debt and German debt have stayed roughly unchanged, and those for Britain have fallen by about 20 percent. So there may well be market reaction specifically to developments in the United States. 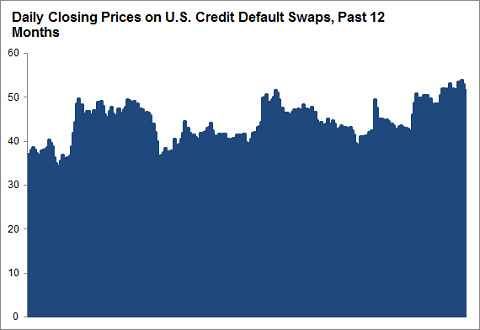 The modest increase in credit default spreads is not exactly what worries me, however. Instead, note how jagged the chart is: there have been some extreme swings in prices from one day to another. By contrast, the stock market over the same period looks much smoother: 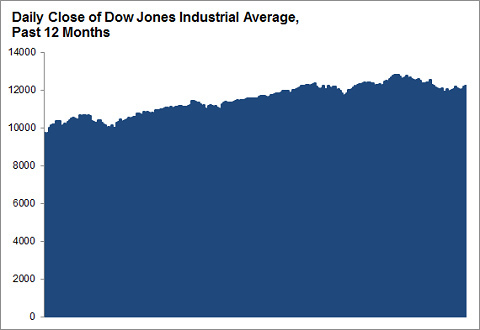 Here is a starker illustration. Instead of closing prices, the next two charts show percentage changes from day to day. First, the Dow industrials: 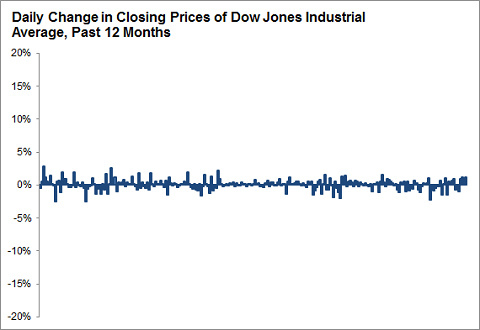 Over the past year the Dow has never closed more than 3 percent higher or lower than the day before. True, it has been a relatively stable year for the stock market — but even that 777-point swoon back in 2008 was just a 7-percent change.

Here is the same kind of data for the default swaps. Spreads have fluctuated by 3 percent or more on 58 trading days over the past year, and on 5 occasions it moved 10 percent or more — the Dow has done that only 10 times in its 115-year history: 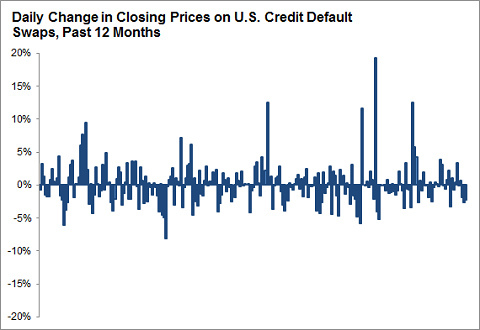 Default-swap prices have not only been extremely volatile, but their volatility has also taken an especially turbulent form. On many days, prices for credit default swaps hardly change at all, but when they do change, it is often by a large amount. In statistical terms, rather than being distributed across a gentle, bell-curved shape, the fluctuations are instead leptokurtic or “heavy-tailed”, like the red line in the chart below. 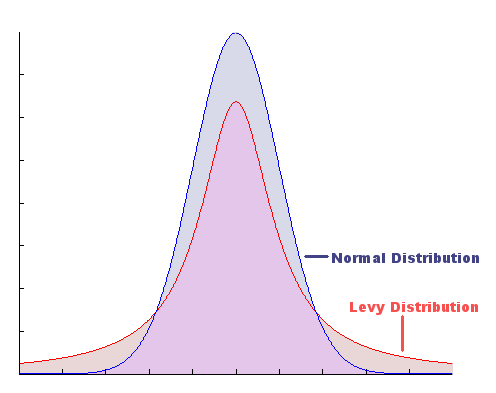 This might sound familiar to readers of Nassim Nicholas Taleb’s book “The Black Swan.” Data sets that behave this way, Mr. Taleb argues, tend to be intrinsically unpredictable. Stock market prices are subject to this phenomenon to some extent, but the prices for credit default swaps are especially strongly so.

The stock market is different from the market for credit default swaps in a number of important ways — the trading volume is much greater, for example — so the comparison is not strictly apples to apples. Nevertheless, the turbulence in the credit-swap data suggests that investors are having an extremely difficult time sizing up the risk of a default.

Seemingly minor news can cause major swings in prices. For instance, prices on the default swaps for Treasuries rose almost 25 percent over four days in mid-May in reaction to some relatively benign and perfunctory comments by Treasury Secretary Timothy Geithner. They rose more than 50 percent during a period of roughly a week in February 2010 in an apparent panic over debt problems in the euro zone, before falling back to their previous levels almost as quickly.

On the other hand, investors have not appeared to react to recent political developments. Prices have not increased since Mr. Cantor broke off negotiations, for example, and they rose only slightly following the Republican takeover of the House of Representatives in the elections last November.

In short, it is foolish to expect investors to react to the possibility of a debt default in a proportionate and orderly fashion, panicking “just enough” to provoke Congress into action. Financial markets have historically had a difficult time reacting to political events. Meanwhile, it would be nearly impossible to build a statistical model for predicting the likelihood of a default by the United States, or its economic consequences, because no such default has ever happened before.

The mathematics of building such a model become even more complicated because of the paradoxical ways in which market reaction may affect behavior in Congress and vice versa. Suppose, for example, that investors were certain that Congress would pass an increase in the debt limit if the Dow were to drop by 2,000 points. In that case, they would have little reason to worry — and little impetus for them to bid down the Dow by 2,000 points in the first place.

Given these difficulties, investors may instead be most likely to react to how other investors are reacting, meaning that negative sentiment could feed back upon itself, causing extremely rapid changes in prices. Any apparent panic in the market is likely to be genuine, with unpredictable near-term and long-term economic consequences.