I agree with much of what The Times’s Ross Douthat has to say regarding the symbiotic relationship between Sarah Palin and the news media, which has come into even sharper relief after the Tucson tragedy.

But I have one quibble with a phrase in Mr. Douthat’s concluding paragraph, in which he refers to the “majority of Americans who are neither Palinoiacs nor Palinistas.” Although I’m not sure as to the exact definition of a “Palinoiac” or a “Palinista,” it is true that an unusually large number of Americans — and possibly a majority — have a strong view of Ms. Palin.

In December, Politico released a survey — conducted by Penn Schoen Berland — that asked Americans their opinions about 16 prominent political figures. (I should note that I’m not completely enamored of the polling firm in question — the surveys they did of U.S. House races last year were fairly inaccurate — but their findings in this case should be reasonable as a rough guide.)

The survey asked people not just what they thought about these political figures, but also how strong their opinions were. In the case of John McCain, for instance, 11 percent of respondents said they had a very favorable view of him, and 25 percent had a very unfavorable view. What I’m interested in is which politicians induced the most of these ‘strong’ responses, whether or not they were favorable or unfavorable.

Three politicians led the pack: the previous two presidents, Barack Obama and George W. Bush — and Sarah Palin. Mr. Obama was viewed very positively by 22 percent of respondents but very negatively by 33 percent of them, for 55 percent total. Ms. Palin’s total was 53 percent, broken down as 14 percent positive and 39 percent negative. Mr. Bush’s was 52 percent (16 percent positive, and 36 percent negative). 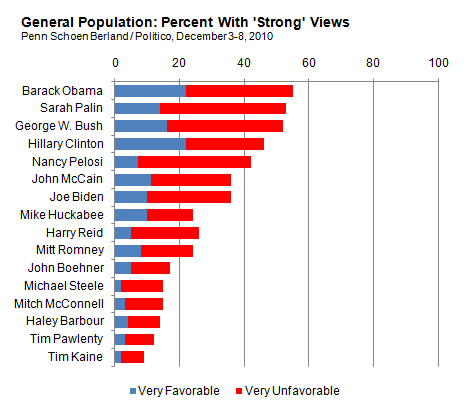 One might want to adjust for the fact that while some of these political figures (like Mr. Obama and Ms. Palin) enjoy nearly universal name recognition, others (like Michael Steele) are much more obscure. If we were to remove the responses of those people who weren’t familiar with the politician, or did not know enough about them to have formulated an opinion, Ms. Palin would nevertheless retain her high ranking: 59 percent of those who had formulated an opinion about Ms. Palin had a strong one of her, which is the highest for any figure on the list. (Mr. Obama and Mr. Bush would be next at 57 percent; followed by the former House speaker, Nancy Pelosi, at 56 percent and Mike Huckabee at 54 percent.)

And so, to Mr. Douthat’s chicken-and-egg dilemma — which came first: Ms. Palin or the media’s sometimes obsessive coverage of her? — we might want to add a third actor: the audience.

It’s clear that Ms. Palin triggers great interest among the public. When Ms. Palin was first announced as John McCain’s running mate in 2008, her Wikipedia page received 2.5 million views on the day of the announcement, as compared to 0.7 million for Joe Biden. Her most recent book, America By Heart, debuted at #2 on the New York Times’ Best Seller List (just behind Mr. Bush’s). Her reality show got almost 5 million viewers in its debut — a huge number for a cable program — although its viewership subsequently declined.

Coverage of Ms. Palin may also not be quite as disproportionate as it might seem: according to a study by the Pew Research Center’s Project for Excellence in Journalism, only 0.04 percent of the coverage in major newspapers, and 0.2 percent of coverage on the network news, was devoted to Ms. Palin in 2010 — although the figure was much higher for MSNBC (1.6 percent) and for Fox News (1.1 percent).

If news coverage were based on a pure supply-and-demand model — that is, as an exercise in maximizing near-term pageviews or ratings points — it is not clear to me whether there would be less or more coverage of Ms. Palin. My guess is that there would be more, although the same might also be true of shark attacks and Natalee Holloway.

At the same time, it also seems that as interested as the general public might be in Ms. Palin — and as much as that may be driving the coverage — she triggers even more interest among another, more particular group. The Penn Schoen Berland poll also included a small sample of what it calls “D.C. elites” — those who live in Washington, have a college degree, make at least $75,000 per year, and work in politics or government.

Among the “D.C. elites” in the poll, 79 percent held a strong view of Ms. Palin — far more than any other politician. Those views, also, were overwhelmingly negative: just 5 percent had a very favorable view of her, versus 74 percent very unfavorable. 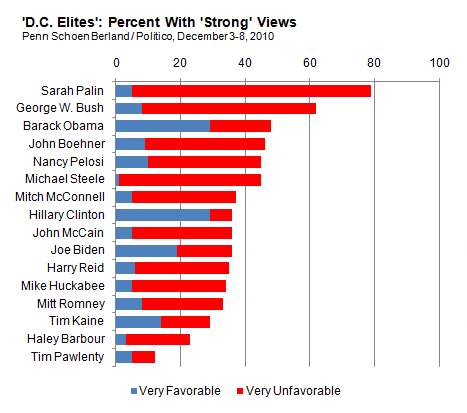 This is a liberal-leaning group (it contained about twice as many Democrats as Republicans), as one might expect of high-income urbanites working in politics or government during a Democratic administration, and so it shouldn’t be surprising that they hold negative views of Ms. Palin — especially given that they are a group Ms. Palin has frequently criticized. Nevertheless, this is a remarkable statistic. It also implies that many of the Republicans in the poll held negative views of Ms. Palin, since there weren’t enough Democrats in the sample to produce numbers quite so lopsided.

All of this, needless to say, makes Ms. Palin’s task very challenging. In delivering comments like the ones she did on the Tucson tragedy last week, she must consider their effect on at least four different audiences: Republican base voters who will vote in next year’s primaries; independent and moderate voters who will vote in next year’s general election; Republican elites — in Washington and elsewhere — who are growing more skeptical about her electoral viability; and the news media itself, which will scrutinize, amplify, and analyze her words, in different ways and in greater volumes than they would for any other politician.