The political betting market Intrade, as of this writing, gives Mitt Romney a 44 percent chance of winning the Republican nomination. I have been pretty bullish on Mitt Romney’s chances of securing the nomination for several months now, and I would probably be a buyer at that price.

But there is another Republican who may be an even better buy: Rick Perry.

Mr. Perry’s Intrade contract has been bid down substantially since Thursday night’s debate. Going into the evening, bettors gave him roughly a 36 percent chance of winning the Republican nomination. Now, his odds are all the way down to 26 percent.

I understand that Mr. Perry had a poor evening on Thursday night. But that seems like an awfully strong reaction to it — probably an overreaction.

One misconception is that Mr. Perry’s standing had been declining in primary polls prior to Thursday evening. This simply isn’t the case, at least not to any degree of statistical significance.

In polls conducted of Republican primary voters between Mr. Perry’s entry into the race on Aug. 13 and his first debate on Sept. 7, he averaged 29.0 percent support. Since then, his support has averaged … 28.4 percent. That is obviously not an appreciable decline. 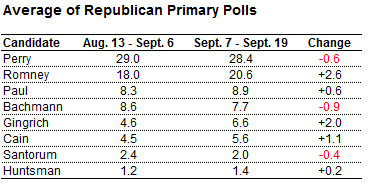 (This stands in contrast to polls of general election voters, among whom Mr. Perry’s standing has declined to a statistically significant degree. That may create problems for Mr. Perry over the long run — but the effects had not yet been apparent in polls of the primary electorate.)

But that is all in the past. What about Mr. Perry’s future?

Roughly 6 million viewers watched Thursday night’s debate. That is a pretty nice audience for Fox News — and somewhat higher than other recent debates. (By comparison, about 3 million people watch the Fox News prime-time lineup on an ordinary evening.)

Of course, the most important audience for the debates at this early stage is probably not rank-and-file voters, but rather conservative and Republican opinion leaders, who will amplify any impressions that voters may have had of the evening, as well as reach some of those who had not watched the debate.

The reaction to Mr. Perry’s performance was very, very harsh among these opinion leaders, including some who had generally been sympathetic to his campaign.

Erick Erickson of RedState, for instance, called Mr. Perry a “horrible debater.” William Kristol of the Weekly Standard labeled his performance as having been close to “disqualifying.”

But there was something else noteworthy about these critiques: while they universally agreed that Mr. Perry performed badly, there was nothing close to a consensus about which candidate might be the alternative to him.

Mr. Kristol, for instance, was so dismayed by the performance of Mr. Perry and the other candidates that he called for Gov. Chris Christie of New Jersey to enter the race. Mr. Erickson said he thought Herman Cain performed well. Byron York of the Washington Examiner declared Rick Santorum to be the winner.

David Frum (although he is often at odds with other conservative thinkers) said he thought the debate presented an opening for Jon M. Huntsman Jr. Mr. Gingrich and Gary Johnson generally got warm reviews in the comment sections.

For the time being, Mr. Perry remains by far the most viable alternative to Mr. Romney. He will not be given an infinite amount of rope to hang himself with, and he will need to perform better in future debates. It is reasonably likely that his polls will take a near-term hit.

But given the lack of appreciable momentum for any of the other candidates — and that all of them had been polling in the single digits — Mr. Perry will probably get a second and perhaps even a third look before one of them has the chance to emerge as the consensus alternative to Mr. Romney. In the parlance of the bond rating agencies, it is appropriate to put Mr. Perry’s campaign on a “negative outlook,” but it is a little early for a full downgrade.