South Korea has a thyroid cancer problem. Incidence of the disease there has climbed 15-fold over the past 20 years — faster than any other cancer worldwide.

South Korea also has a thyroid cancer diagnosis problem. In a study published this month in the New England Journal of Medicine, researchers identified the cause of the country’s alarming epidemic: South Korea’s high-tech health care system. A national cancer screening program started in 1999 provides free screening for several common cancers, and thyroid cancer screenings are widely offered as a cheap add-on. As a result, the number of Koreans getting screened for thyroid cancer has soared.

That might sound great. But the good news about this epidemic — death rates from thyroid cancer have remained flat (and low), despite the skyrocketing number of diagnoses — is also the bad news. Ideally, screenings should lead to a decrease in cancer deaths. But not in South Korea.

In 2011, 40,000 South Koreans were diagnosed with the disease — more than 100 times the number of people there who die from it each year. The huge influx of new cases consists almost entirely of papillary thyroid cancers, an early-stage variety found in about one-third of all adults without symptoms. The idea behind screening is to find and treat early-stage cancers, preventing them from becoming deadly. When it works, the number of advanced cases and deaths go down as early diagnoses rise, as you can see in this chart from Dartmouth physician and epidemiologist H. Gilbert Welch. 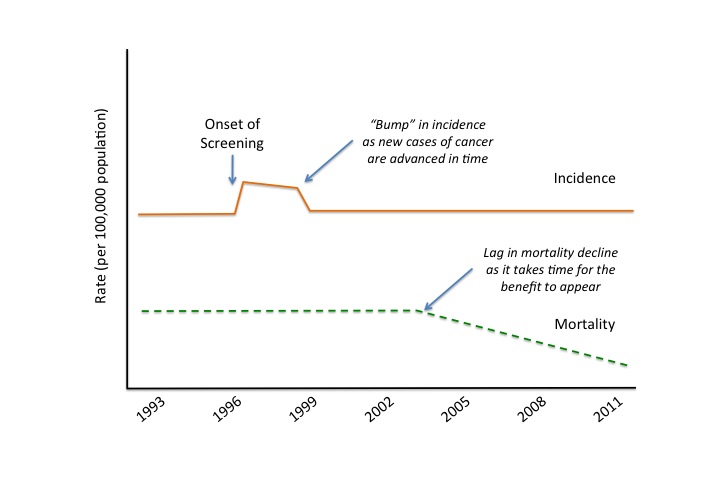 But that’s not what researchers found. When Welch and his colleagues at the University of Seoul Hyeong Sik Ahn and Hyun Jung Kim looked at the South Korea data, the numbers showed that very few people die of thyroid cancer, in South Korea or anywhere else. And finding and treating more early cases of the disease did not change the death rate in any way, as this chart from the New England Journal of Medicine shows: 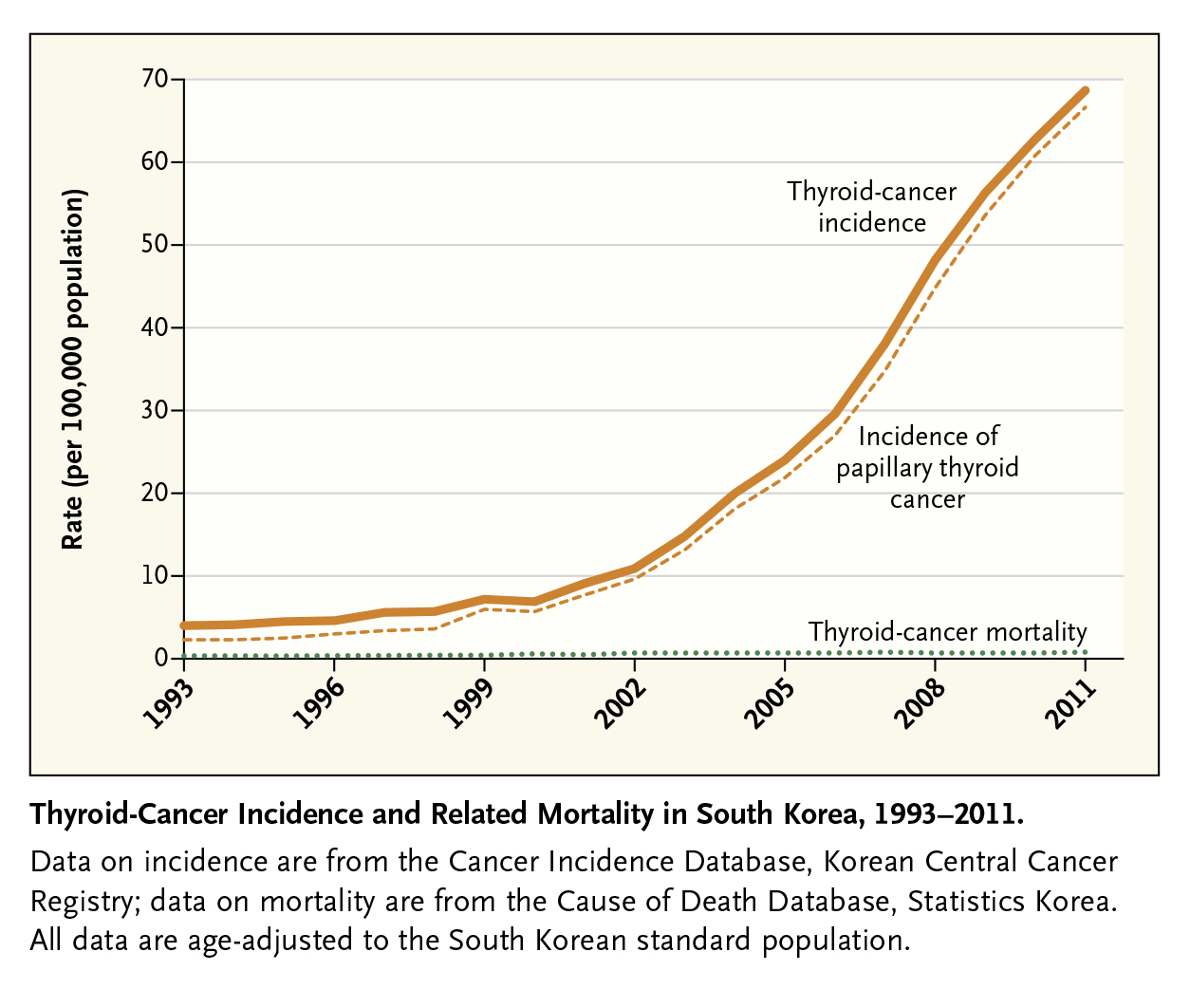 This phenomenon isn’t confined to South Korea. Rates of thyroid cancer in the United States have nearly tripled since 1975 without any change in mortality rates.

The harder we look for cancer — any cancer — the more we find. But most of these extra cases are ones like papillary thyroid cancers that never pose a threat. Researchers have a name for this — overdiagnosis, and it leads to another problem, overtreatment. Most people diagnosed with thyroid cancer get their thyroids surgically removed and must take hormone replacement drugs for the rest of their lives.

It’s hard to believe in overdiagnosis and overtreatment if you imagine that cancer behaves in a progressive manner: that is, that it arises from one haywire cell that replicates abnormally before inevitably spreading to other parts of the body, eventually killing the person. Let’s call this way of thinking the relentless progression model. In this model, every cancer cell is destined to spread and become lethal, and that’s how doctors have traditionally been taught to think of cancer’s progression.

Today, thanks to sophisticated cancer genetics and advances in tumor biology, we know that’s not always how it works. Cancer is not a single disease; it’s many. On one end of the spectrum lie cancers that become aggressive and invasive from the start, and on the other end are cancers that remain non-invasive and therefore harmless. Whether a single rogue cell replicates slowly and stays put or goes wild and spreads is determined by a variety of factors that scientists are still working to understand.

What’s clear is that cancers fall into a few general behavior patterns, which Welch and others have compared to animals that must be kept in the barnyard to prevent a deadly rampage. Papillary tumors are like turtles — they move very slowly and never pose an escape risk. They don’t need screening, because they will never cause trouble. Then there are rabbits, which are eager to hop away to other parts of the body, but can be confined if they’re found and fenced. These are the cancers that can be helped by early detection and treatment. Birds, on the other hand, are so flighty and quick that they can’t be confined. Screening makes no difference for bird cancers, because they’re so aggressive that they can’t be detected before they’ve begun their deadly course.

No cancer screening has ever eliminated the majority of cancer deaths. Instead, the best screening can do is reign in the rabbits. Birds remain unstoppable, and they’re the ones responsible for most cancer deaths. This is why, Welch says, three decades of mammography have failed to put a dent in the rate of women presenting with metastatic breast cancer upon their initial diagnosis. Women with breast cancers that behave like birds will almost never be helped by a mammogram, nor will men with the most aggressive prostate cancers be saved by PSA tests.

Early detection might remain a laudable goal if it caught some deadly cancers in time to make a difference and didn’t bother anyone. But it is bothering people. Tens of thousands of South Koreans have undergone surgical procedures for cancers that likely would never have threatened their lives, and the overdiagnosis/overtreatment problem exists to varying degrees for every cancer test.

The problem gets worse, the more people you screen, as evidenced by the numbers for mammography and PSA screening. 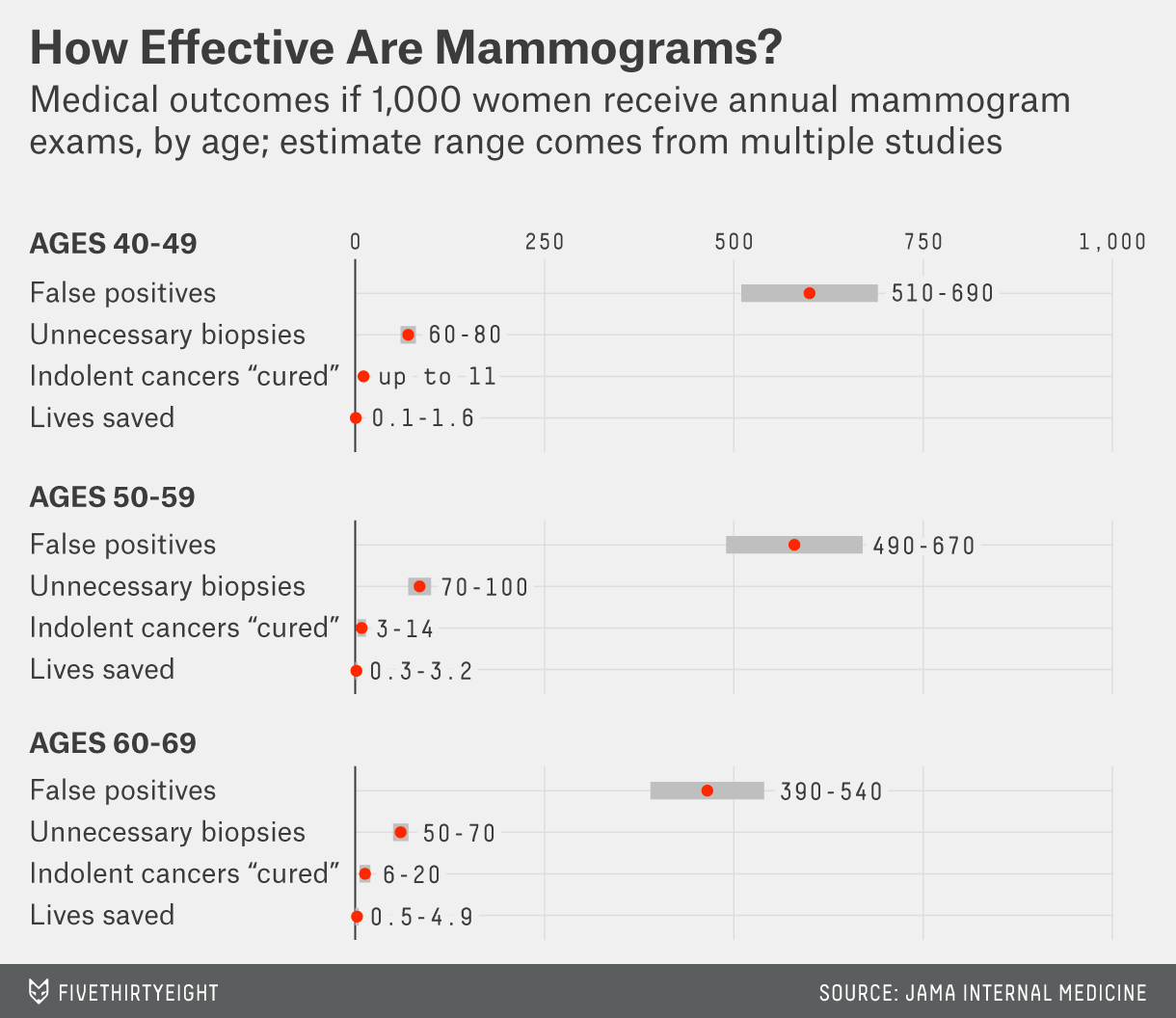 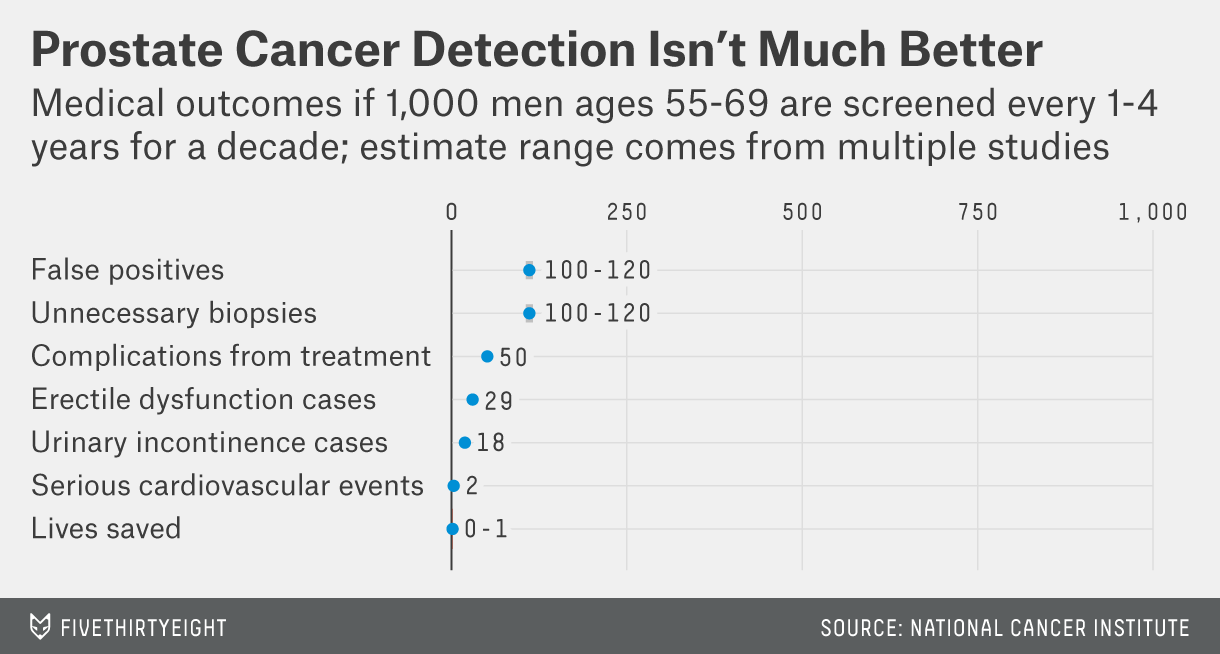 Despite evidence of the potential harms from screening, efforts to revamp testing recommendations have sparked contentious, often nasty debate, and it’s worth pausing a moment here to understand why. Some of it traces to a belief in the relentless progression model of cancer, which still dominates the messaging of many cancer awareness groups.

But there’s also the fact that screening’s downsides are only apparent when you take an epidemiologist or statistician’s long view. When the U.S. Preventive Services Task Force (USPSTF) updated its guidelines in 2009 to make mammography a personal decision between a 40-something-year-old woman and her doctor, many physicians and radiologists attacked the panel for its focus on statistics instead of individual women. Some also criticized that fact that no breast oncologist belonged to the group. But that was exactly the point. Without examining the population-wide statistics, the harms of screening look indistinguishable from its benefits.

We already have a sense for ways to optimize cancer screenings. Focusing on “just in time” detection would find rabbits when they are distinguishable from turtles but remain stoppable. Right now, there’s no way to distinguish turtles from rabbits, but researchers are working to find genetic markers that doctors can use to determine a cancer’s potential to become invasive, which would let them avoid over-treating less aggressive cancers. Another strategy is to narrow the population that gets screened. For instance, the USPSTF recommends lung cancer screening for adults age 55 to 80 who have a history of regular smoking, the population with the highest risk.

Some cancer screening recommendations have shifted to reflect the potential for overdiagnosis. After analyzing the latest numbers, the USPSTF has stopped recommending routine PSA tests, and the American Urological Association and American Cancer Society have called for individualized decisions, rather than blanket screenings for all. Some guidelines call for biennial, rather than annual, mammograms to reduce harms.

Until tests can more accurately distinguish the rabbits from the turtles (not to mention the dodos — it’s now looking like some cancers detectable by screening may actually disappear or go extinct on their own), cancer screening may harm more people than it helps. But cancer is a scary disease, and when there’s potential to save a life, some people will gladly take on the risks. Getting screened for cancer is like playing the lottery — your chances of winning aren’t great, but if you do the payoff’s a jackpot.