“The recent rise of Bernie Sanders,” wrote Vox’s Jonathan Allen last week, “points as much to [Hillary] Clinton’s vulnerability as Sanders’s strength.” Allen went on to argue that Joe Biden should run for president. “The Sanders surge shows that Democratic activists want an alternative to Clinton,” he explained.

We’ve seen this idea before. For at least a year, journalists have been urging, sometimes almost begging, Biden to enter the race. The more elaborate versions of the idea liken the 2016 campaign to 1968, a year in which the incumbent president, Lyndon B. Johnson, withdrew after the liberal, anti-war candidate Eugene McCarthy finished a close second in the New Hampshire primary. The nomination was eventually won by Johnson’s vice president, Hubert Humphrey, after Robert F. Kennedy (who had entered the race after New Hampshire) was assassinated. In the 2016 narrative, Clinton is Johnson, Sanders is McCarthy and Biden is some composite of Kennedy and Humphrey.

But these comparisons suffer from a fatal flaw. Unlike LBJ, who (mostly because of the Vietnam War) had approval ratings only in the mid-50s or low 60s among Democrats during the 1968 campaign, Hillary Clinton is beloved by voters in her party. In national polls, her favorability ratings among Democrats usually exceed 80 percent.

Nor do Sanders’s gains in Iowa and New Hampshire say much about Clinton’s vulnerability. This is easy enough to test. When a candidate gains relative to another, it could be because he is growing more popular, or because his opponent is becoming less popular. Horse-race polls, in which voters reveal only their first preference, won’t always be able to distinguish between these causes. 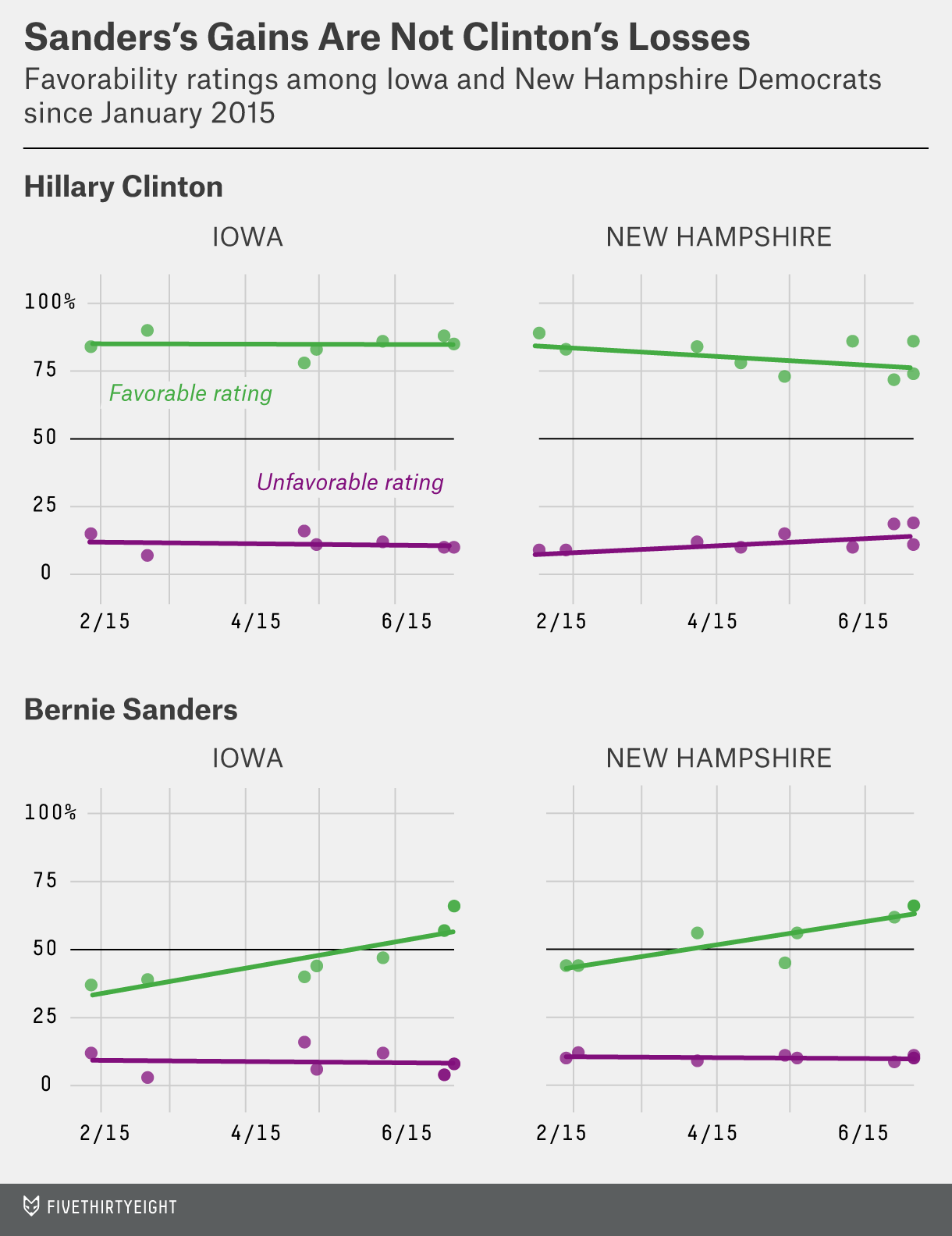 Perhaps you can perceive a slight downturn in Clinton’s favorability numbers among Democrats in New Hampshire — they’re now in the high 70s instead of the mid-80s, while her unfavorable ratings have grown by a few percentage points. Her ratings are still very good, however, and (given the noise in the polling) the change isn’t statistically significant.1

Instead, it’s the Vermont senator’s ratings that have shifted dramatically. In Iowa, Sanders’s favorability rating has grown from about 35 percent at the start of the year to 60 percent now. And in New Hampshire, it has improved from around 45 percent to 65 percent. Some of that is from improved name recognition, but Sanders’s unfavorable ratings haven’t increased even as he’s become better known, remaining at about 10 percent in each state.

The Bernie Sanders surge, in other words, has a lot more to do with Bernie Sanders than with Hillary Clinton. More specifically, it has to do with his left-populist politics. We’re going to break some news here: It turns out that some Democrats are really liberal, and they like a really liberal candidate like Sanders. Right now, Sanders is winning about half the support of white liberal Democrats, but little support from other groups within the party. That works out to around 25 or 30 percent of the vote in Iowa and New Hampshire but more like 15 percent among Democrats nationally.

It’s possible that Sanders’s standing will continue to improve. If he goes from winning half of the white liberal vote to most of it, he could win Iowa and New Hampshire, though not very many other states.

But he could also encounter some headwinds. Sanders’s name recognition is now 70 to 80 percent in Iowa and New Hampshire, so he doesn’t have that much more room to grow on the basis of improved name recognition alone. And while he’s an appealing choice to some very liberal Democrats, Democrats who describe themselves as “somewhat liberal” may instead prefer Clinton. The policy differences between the Democrats aren’t all that profound; Clinton is pretty liberal herself, and she and Sanders voted together 93 percent of the time in the two years they spent in the Senate together.

Sanders may also be benefiting from media coverage of his campaign, which has been favorable to him recently. Polls that show him gaining in Iowa and New Hampshire receive lots of press coverage, whereas those that show him stalling out, like this one released late last week, are all but ignored. Meanwhile, it was described as a “game-changer” when Sanders announced he’d raised $15 million in the spring, even as Clinton raised $45 million during the same period.

Some of this has to do with the longstanding antipathy between the Clintons and the news media (a phenomenon that Allen has written about). But the media have another incentive to paint Sanders’s candidacy in a favorable light, the same one that encourages them to call for a Biden candidacy: Coronations are boring. They’d rather see a competitive Democratic primary, which means more to talk about and analyze, and thus more viewership and traffic. This isn’t an anti-Clinton thing, necessarily; in the past, the dynamic has sometimes worked toward Clinton’s benefit. The 2008 Democratic nomination was portrayed as anyone’s race until the bitter end, for instance, even though Barack Obama’s substantial lead in delegates made it difficult for Clinton to win.

Ordinarily, Democrats might push back against what they perceived to be unfair or inaccurate coverage about Clinton. But Democratic activists and commentators are more liberal than Democrats as a whole. Many of them like Sanders’s policy positions — and even though they may also like Clinton, they’d like to see her pulled further to the left before the general election gets underway.

What about the Clinton campaign itself? So long as Clinton retains 80 percent favorable ratings among Democrats, she has little reason to deflate the Bernie bubble. Sanders may satiate the media’s desire for a “competitive” Democratic primary without really making her vulnerable. Clinton has plenty of ammunition, however, including her money and the endorsements she’s received from her fellow Democrats (including many Democrats who are almost as liberal as Sanders). That’s likely enough to secure her the nomination without her going negative. If needed, she could also press concerns about the electability of Sanders, a 73-year-old self-described socialist who hasn’t run a national campaign before.

In the meantime, you’re likely to see journalists misunderstand the reasons for Sanders’s gains, attributing them incorrectly to criticisms of Clinton. Her email scandal, for example, has received plenty of press coverage, but it isn’t likely to weigh her down in the primary. While only 42 percent of Americans overall say that Clinton is honest and trustworthy — a potential concern for her in the general election — 73 percent of Democrats think she is. And 80 percent of Democrats say Clinton cares about people like them.

There isn’t much of a market among Democrats for an “anybody but Hillary” candidate, in other words. And it’s particularly illogical to argue that Biden might serve as a better foil to Sanders. Biden has lower favorable ratings and higher unfavorable ratings than Clinton and by statistical measures is further to the right.

So if you’re going to speculate about a new candidate entering the race, at least do it in a way that’s consistent with the evidence. Since Sanders’s surge is mostly about Democrats liking a really liberal candidate, you could argue that Massachusetts Sen. Elizabeth Warren should run for president. She’s also extremely popular with liberals but carries less baggage than Sanders.2 But it’s going to be hard for any Democrat to beat Clinton as long as she has an 80 or 85 percent favorability rating within her party.