Sony’s critically beloved “MLB: The Show” series makes the leap to the PlayStation 4 Tuesday, a new platform for a franchise that has been, by any standard, the undisputed champion of console baseball gaming for nearly a decade. Granted, that distinction comes by default this year, after 2K Sports announced the discontinuation of its MLB 2K series.1 But if “The Show” hasn’t had meaningful competition to spur it on the past few years, that’s partly because the franchise essentially chased 2K2 completely out of the baseball business. In a high-stakes head-to-head matchup, “The Show” dominated its competition.

This had me thinking about the lineage of “best baseball video game” title-holders, and who claimed the accolade before “The Show” did. Our colleagues at Grantland are fond of writing about mythical “Championship Belts” for everyone from NFL quarterbacks to movie action heroes, so I thought I’d do the same for console baseball video games (apologies to PC games like “Out of the Park”), using GameRankings’ data on how reviewers regarded each title at the time of its release.3

Unfortunately, review data for older games is scant, so I can’t hand out any pre-1996 baseball video game championship belts.4 That’s why we begin in 1996, the prime era of the fifth generation of video game consoles. 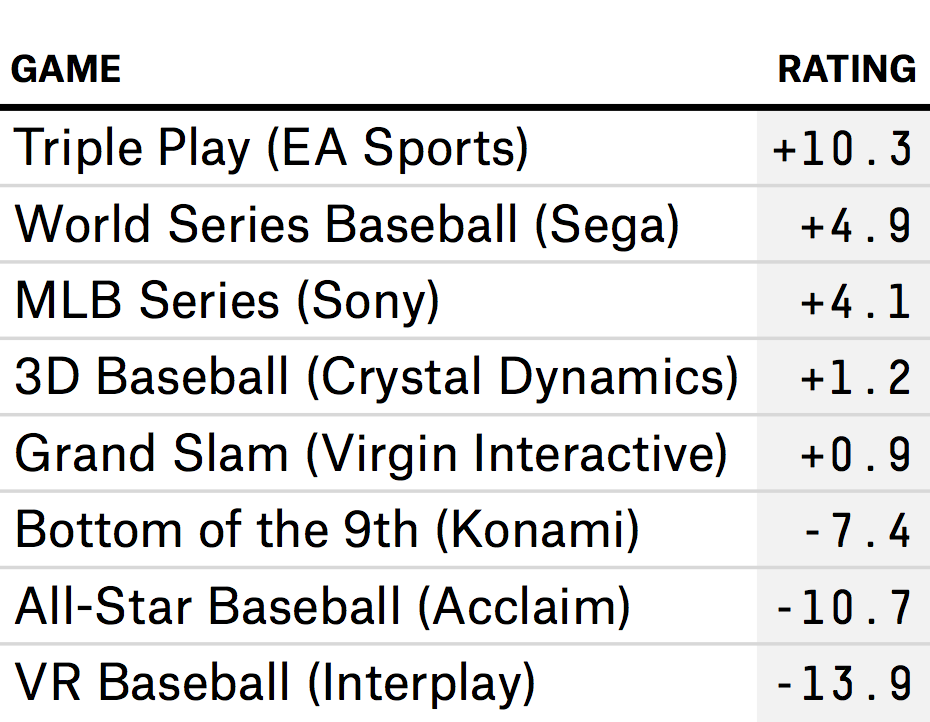 “World Series Baseball” for the Sega Saturn was the most highly regarded baseball game of 1995, and its sequel was the most anticipated baseball title heading into 1996. But that was the year EA Sports’ “Triple Play” series made its debut on the PlayStation. The games ended up in a de facto dead heat in ’96; “World Series” garnered a higher rating in head-to-head reviews from the same outlets, but “Triple Play” had a better composite rating against the other games in the market (of which there were many on PlayStation — anybody remember “3D Baseball” or “Bottom of the 9th”?). Reviewers were torn in a classic dilemma: They loved “World Series’” gameplay, but thought “Triple Play” looked better graphically.

The following year, “World Series Baseball ’98” had another solid showing, but GamePro gave Sega’s effort a mere 3.5 out of 5 while simultaneously bestowing a perfect 5 grade upon “Triple Play 98.” Fueled by that ratings coup, and some landslide victories against its foes on the PlayStation, “Triple Play” easily won the crown in 1997, and earned a higher two-year rating than “World Series.” 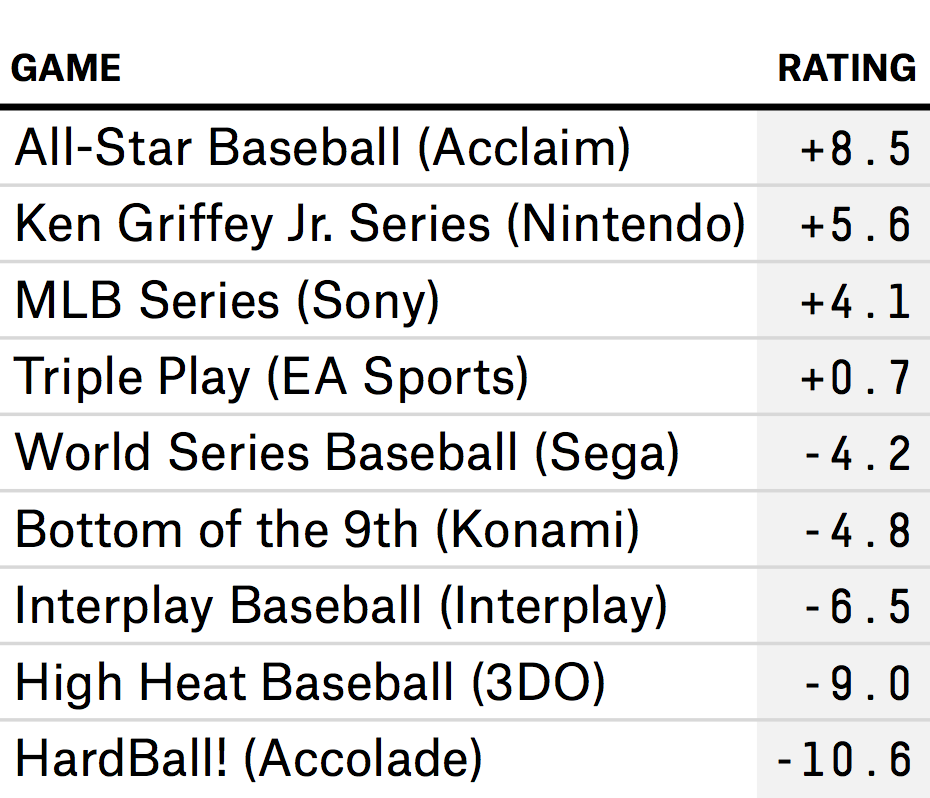 Acclaim’s “All-Star Baseball” series originated as “Frank Thomas Big Hurt Baseball” for the previous generation of consoles. The inaugural edition for the PlayStation didn’t receive awful reviews, but a follow-up (branded “All-Star 1997 Featuring Frank Thomas”) was savaged by GamePro, and rated more than 17 points below the average baseball game according to my system. It was time for a change, so developer Iguana Entertainment abandoned the PlayStation entirely in favor of the Nintendo 64.

The results were three critically esteemed titles (the best of which was probably “All-Star Baseball 2000”) which notably raised the graphical bar for baseball games of that era. Much of this was owed to hardware improvements — the Nintendo 64 platform was stronger graphically, at least in terms of speed and texture smoothness. Baseball being a sport that makes heavy use of eyesight — particularly on the batting side — better graphical capabilities allowed baseball games like “All-Star” to move away from an arcade gameplay style and into the domain of realistic simulations.

Although a move to the PlayStation 2 in 2001 led once more to mediocre reviews for “All-Star Baseball,” for a three-year window the game owned the championship belt with authority. Of course, some of that was also due to a lack of competition. Sony’s “MLB” series garnered good (but not great) reviews, while 3DO’s “High Heat Baseball” — long a favorite of PC baseball gaming connoisseurs — had to overcome a rough PlayStation debut.5

Meanwhile, the dominant franchises of just a few years earlier fell on hard times. “Triple Play 99” was weak compared to EA’s previous offerings, and the series struggled to consistently please critics as it attempted in vain to straddle the line between arcade and simulation, just as successful games like “All-Star” and “Ken Griffey Jr.’s Slugfest” were choosing one style or the other. “World Series Baseball” took a brief hiatus after the Sega Saturn was phased out; its return (for the Dreamcast) looked fantastic but suffered from truly abysmal gameplay.

Given all that, the biggest challenger to “All-Star Baseball” was probably another N64 exclusive: the “Ken Griffey Jr.’s Slugfest” series. “All-Star” provided the realism simulation-junkies were after, while “Griffey” served up a faster-paced arcade experience. Either way, 1998 to 2000 were the greatest years to be a baseball gamer who owned a Nintendo 64. 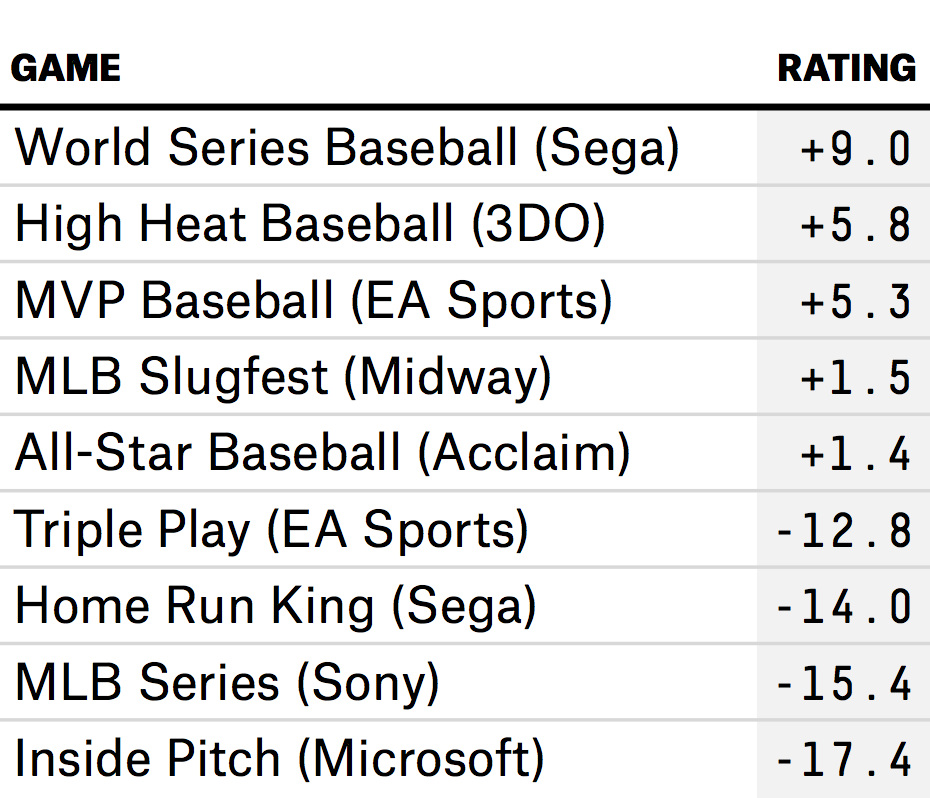 After the catastrophe that was “World Series Baseball 2K1,” Sega dropped developer Wow Entertainment and turned to Visual Concepts, the group behind its widely-praised “NBA 2K” and “NFL 2K” series. Visual Concepts’ baseball debut on Dreamcast — “World Series Baseball 2K2” — was a major improvement over “2K1,” but the series enjoyed its biggest breakout after Sega gave developing responsibilities to indie studio Blue Shift for the Xbox and PlayStation 2 versions, resulting in the highest-rated baseball games of both 2002 and 2003.6

The trend toward realistic gameplay, which helped propel “All-Star Baseball” to the championship a few years earlier, continued unabated during this period. How else to explain the second-place finish for “High Heat,” a series with consistently subpar visuals but a slavish devotion to accurate simulation? And while “World Series Baseball” won the belt on the strength of many factors, the biggest was smooth, balanced gameplay that produced realistic results.

A look at this period, when some studios were still fully transitioning from the fifth generation of consoles to the sixth, also highlights the unevenness of baseball game franchises before the age of exclusive contracts. For instance, “High Heat,” which had struggled mightily in its ports to the original PlayStation, built on the surprising success it found on the PS2 in 2001, and ended up boasting one of the best baseball franchises of the 2002-03 period.7

At the other end of the spectrum, 989 Sports’ “MLB” series — a shadow of its former self — fared poorly, struggling to adapt to the PlayStation 2. And the once-proud “Triple Play” franchise continued its decline, bottoming out in 2002 with shockingly weak reviews as critics blasted just about every aspect of the game.

However, from the ashes of “Triple Play” came “MVP Baseball 2003,” an innovative debut from EA Sports that laid the groundwork for the next great baseball series. 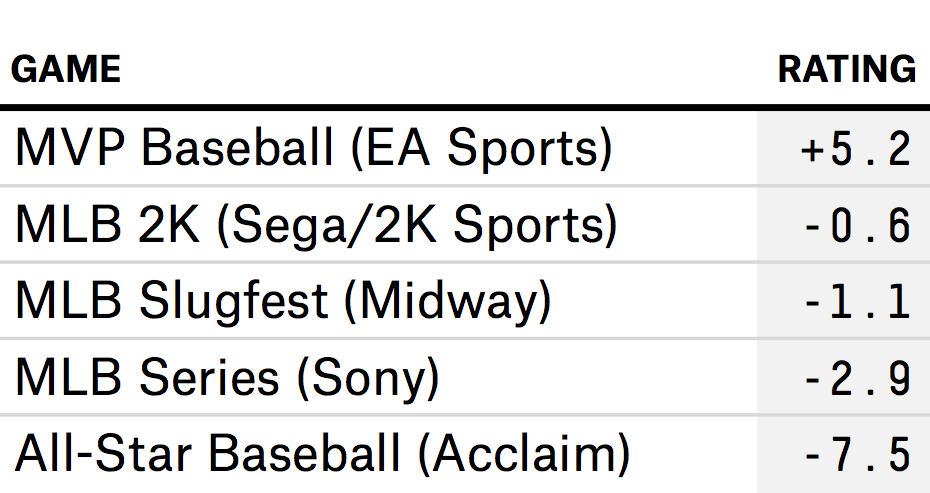 In one of the all-time great one-year turnarounds, EA Sports went from releasing the laughingstock “Triple Play 2002” to a fresh, exciting title-on-the-rise with “MVP Baseball 2003.” It was more than the smoke and mirrors of a name change; as obvious as it seems today, “MVP’s” meter-based pitching interface was considered revolutionary at the time. And with its next two follow-ups, “MVP” reached near-mythical status, refining the gameplay engine and adding a deep franchise mode the likes of which no console game had ever attempted before.

At the same time, Sega/2K Sports’ offerings surprisingly failed to build on the successes of 2002-03, stalling out critically with “ESPN Major League Baseball” and “Major League Baseball 2K5.” It wasn’t so much that 2K’s games were moving backwards,8 but they hadn’t improved as sharply as EA’s had over the two-year span. Considering 2K’s stagnation, a pair of mediocre releases from Sony and the dissolution of Acclaim’s once-great “All-Star Baseball” series, “MVP Baseball” was a shoo-in for the crown in 2004 and ’05.

Like that of Barry Sanders, there’s no doubt the legend of “MVP Baseball” (which persists to this day) was enhanced because it vanished at the top of its game. Because high-level boardroom machinations left rank-and-file gamers feeling deprived of the most critically acclaimed baseball title on the market, there was always a certain “fight the power” appeal to hyperbolizing the greatness of “MVP.”9 Still, it earned the championship belt for two years, and influenced subsequent baseball games in ways we’re still witnessing.

“The Show” never saw a serious threat to its championship belt, at least not from “MLB 2K.” The “MLB” series was going though a long-term downturn under the developmental watch of 989 Sports, which never really seemed to make it a competitive title for the PS2. That changed in 2006, when SCE San Diego Studio started developing “MLB: The Show” as a new franchise. “The Show’s” debut was a revelation, easily crushing “MLB 2K6” on the PS2, and the series hasn’t looked back since.

The secret to “The Show’s” success was building an outstanding core gameplay engine, then adding all the details baseball fans love to obsess over. By contrast, “MLB 2K’s” engine on seventh-generation systems was centered on often-buggy stick-based swinging and pitching mechanics, which frequently felt like a forced attempt to recapture the brilliance of “MVP’s” introduction of the pitching meter.10 Instead of chasing gimmicks without first nailing down gameplay, Sony followed the model laid out by past championship-belt holders who put realism first.

If any franchise ever pushed “The Show,” it was 2K Sports’ arcade-themed series “The Bigs,” which came within 0.9 points of Sony’s game11 in 2007, according to my regression-based rating system. But by the time 2K released “The Bigs 2” in 2009, “MLB: The Show” had found its stride on the PS3, and was crushing all comers. No sequels to “The Bigs” were made after that.

That’s how “The Show” begins its PS4 journey today as the reigning baseball video game championship belt-holder. With the market narrowing so much since the halcyon days of the 1990s, it’s tough to imagine which publisher will challenge Sony’s dominance in the future. But, as we’ve seen in this history of the championship belt, no reign lasts forever.