In 1988, the typical American adult was 40 years old, white and married, with a high school diploma. If he was a man, he probably worked full time. If she was a woman, she probably didn’t.

Twenty-five years later, Americans are older, more diverse and more educated. We are less likely to be married and more likely to live alone. Work is divided more evenly between the sexes. One thing that hasn’t changed? The income of the median U.S. household is still just under $52,000.

The government’s release last week of income and poverty data for 2013 brought renewed attention to the apparent stagnation of the American middle class — not just since the financial crisis hit six years ago this month, but for much of the decade that preceded the crash. The report showed that the economic recovery has yet to translate into higher incomes for the typical American family. After adjusting for inflation, U.S. median household income is still 8 percent lower than it was before the recession, 9 percent lower than at its peak in 1999, and essentially unchanged since the end of the Reagan administration.

“As a country,” New York magazine’s Annie Lowrey wrote Friday, “we peaked in the late 1990s.”

There’s little doubt that the past 15 years have been hard ones for the middle class. But median income isn’t necessarily the best way to show that. The problem is that changes in median income reflect several trends all jumbled together: the aging of the population, changing patterns in work and schooling, and the evolving makeup of the American family, as well as long- and short-term trends in the economy itself. Understanding the state of the American middle class requires digging a bit deeper than median income alone.

Let’s start with what median income does measure: the amount of money earned by the household at the midpoint of the U.S. income distribution — half of households make more, and half make less. Journalists, including me, often refer to it as the amount earned1 by the “typical household,” which is true as long as we’re talking about a moment in time. But as soon as we start talking about change over time, median income becomes trickier to interpret. 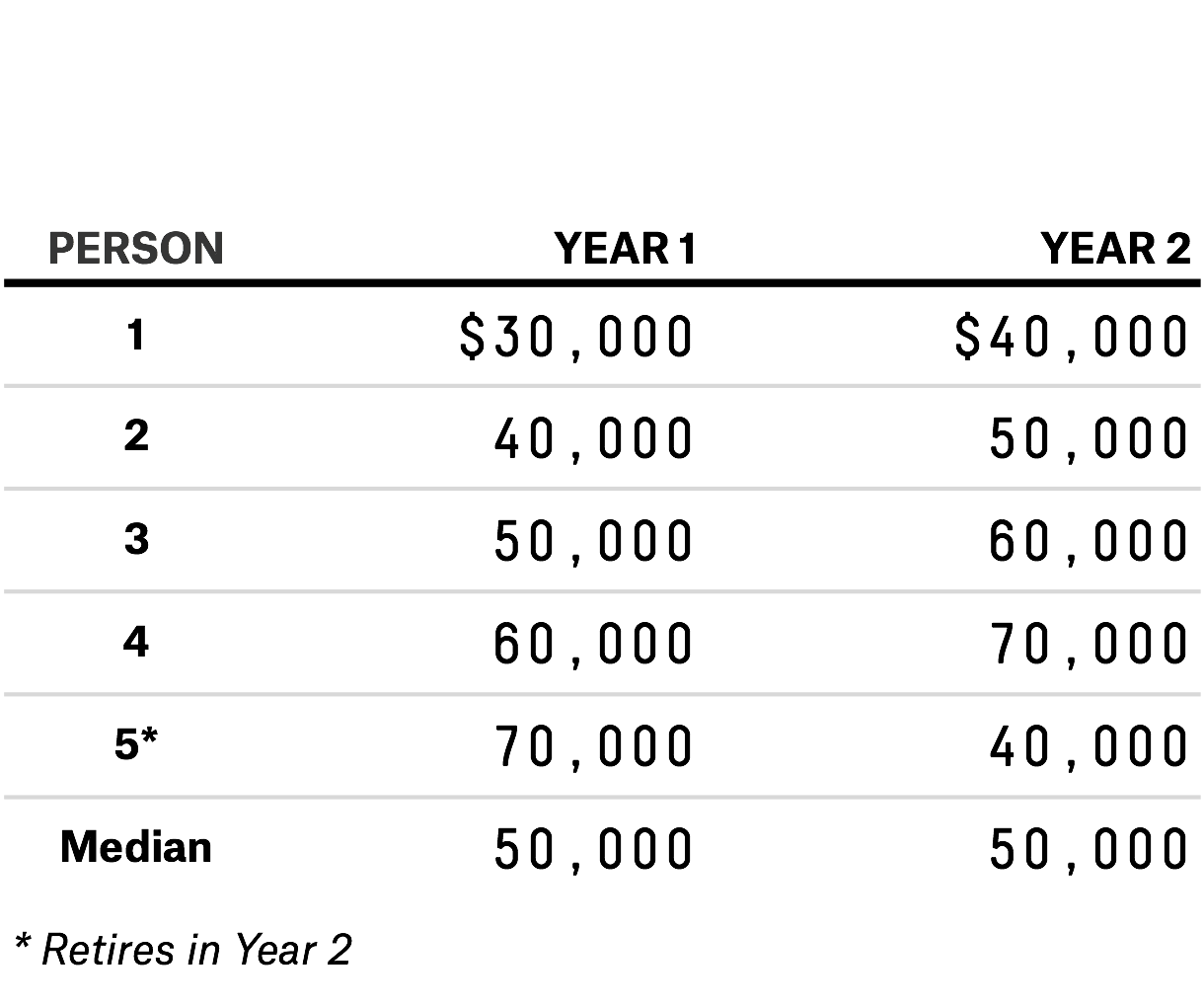 To understand why, imagine a simple model in which there are five people. The poorest makes $30,000 a year and the richest $70,000, with the other three evenly distributed in between. The group’s median income would be $50,000. The next year, everyone gets a $10,000 raise — except the richest person, who retires and starts drawing a $40,000-a-year pension. Most people see their income go up, but the median remains unchanged.2

This scenario is oversimplified, but it illustrates a trend. On average, people’s earnings rise in their 20s and 30s, peak sometime in their late 40s or early 50s, and then decline when they retire.3 All else equal, the retirement of the baby boom generation should push down the overall median income.

Aging, at least, is fairly easy to control for. We can look, for example, at how much money people earned at a given point in their lives. The charts below show median income over time for specific ages.4 The details differ, but the trend is similar: Incomes generally rose until 2000 and have generally fallen since then. The aging population certainly isn’t helping the overall decline in incomes, but it isn’t causing it either.5 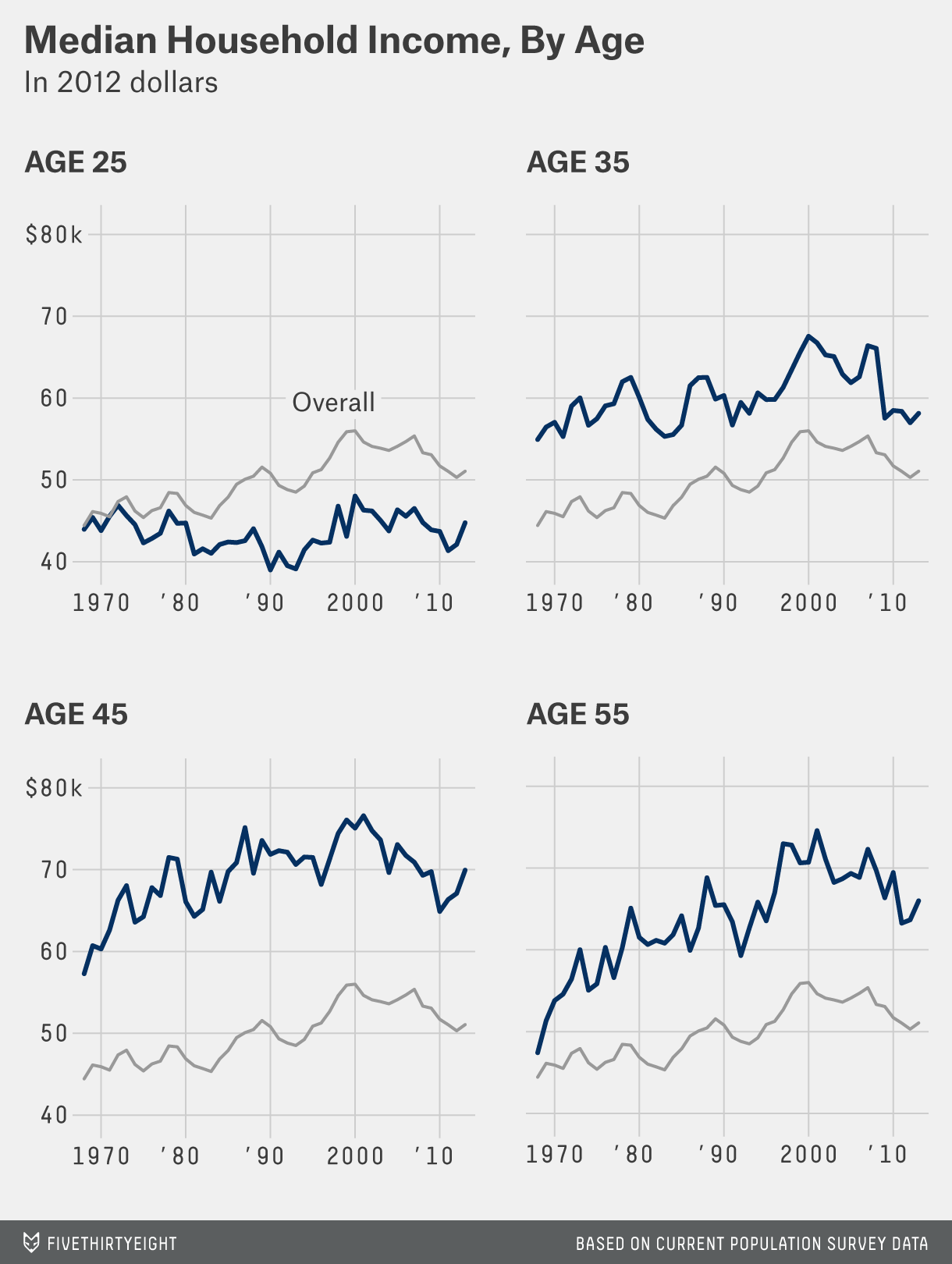 But aging isn’t the only trend that could be skewing the median. Fewer Americans are getting married, and they’re having fewer children. That means the size of the typical U.S. household is shrinking — which is important, because it costs more to support more people. There’s a big difference between an individual living on $50,000 a year and a family of four doing the same. To account for this, economists often adjust incomes for household size, scaling up the income for the person living alone and adjusting it down for the family of four.6

As the chart below shows, adjusting for household size makes a significant difference before 2000. But since then, the trends line up closely.7 The shrinking U.S. household doesn’t explain the past 15 years of stagnation. 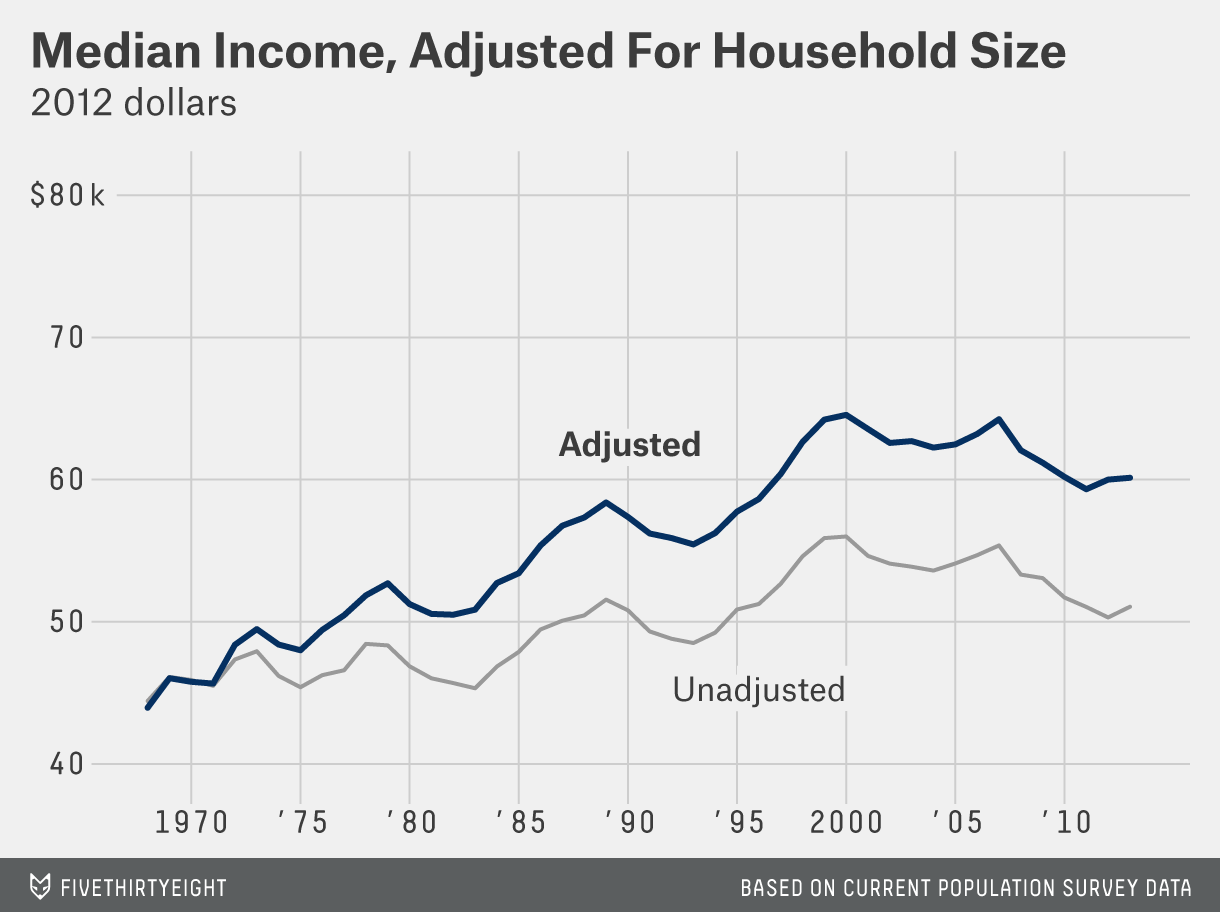 The U.S. is changing in other ways, too: by race, by education, and by the region where they live. But almost no matter how we break down the population, incomes are down since 1999. Moreover, most groups saw little if any improvement in income between 1999 and 2007, before the recession began. 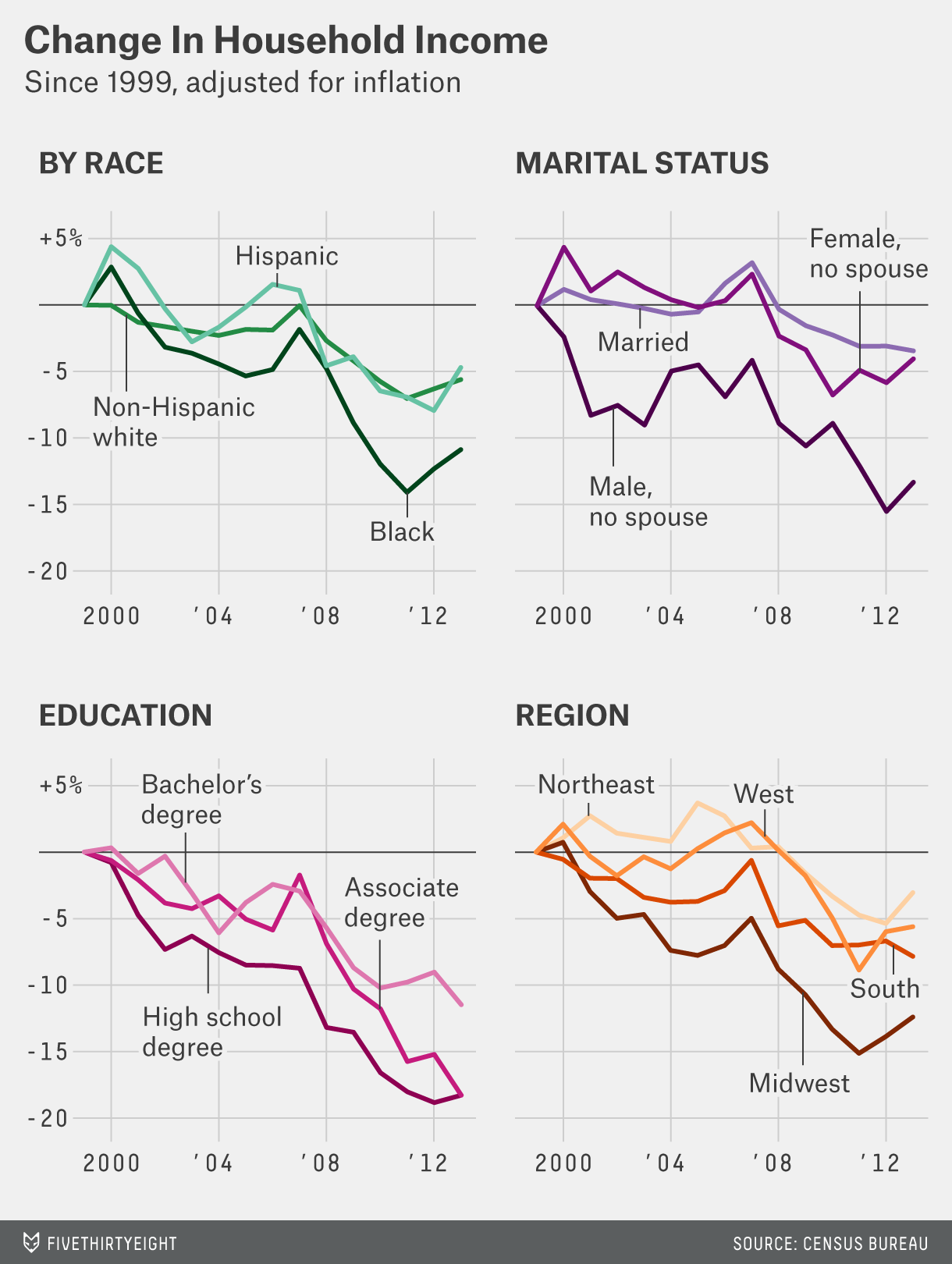 In 1970, 55 percent of U.S. income was earned by households in the middle 60 percent of the income distribution. More than half of households were in what Pew Research Center has labeled the “middle tier” of households (those earning between two-thirds and twice the median income). In 2013, both numbers had fallen to about 45 percent. In a 2012 report, Pew researchers called the 2000s “the lost decade of the middle class.” 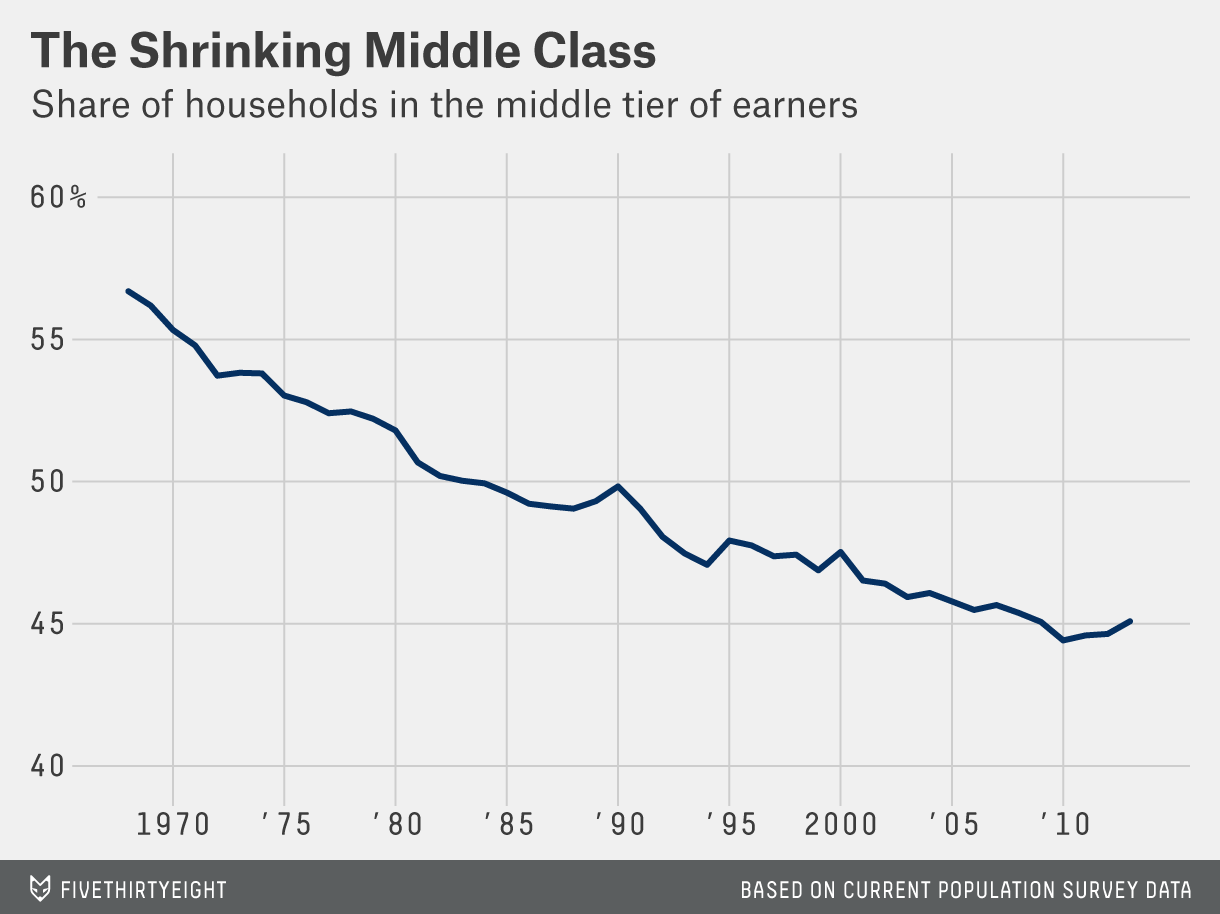 One common definition of the American dream is the belief that each generation will do better than the one before. By that measure, the dream is fading. Take the generation born in 1970. In early adulthood, these Americans outearned their parents, those born in 1950. But their gains stalled in the 2000s, when they were in their 30s. Now in their 40s, their earnings have fallen behind those of their parents at the same stage in their lives. 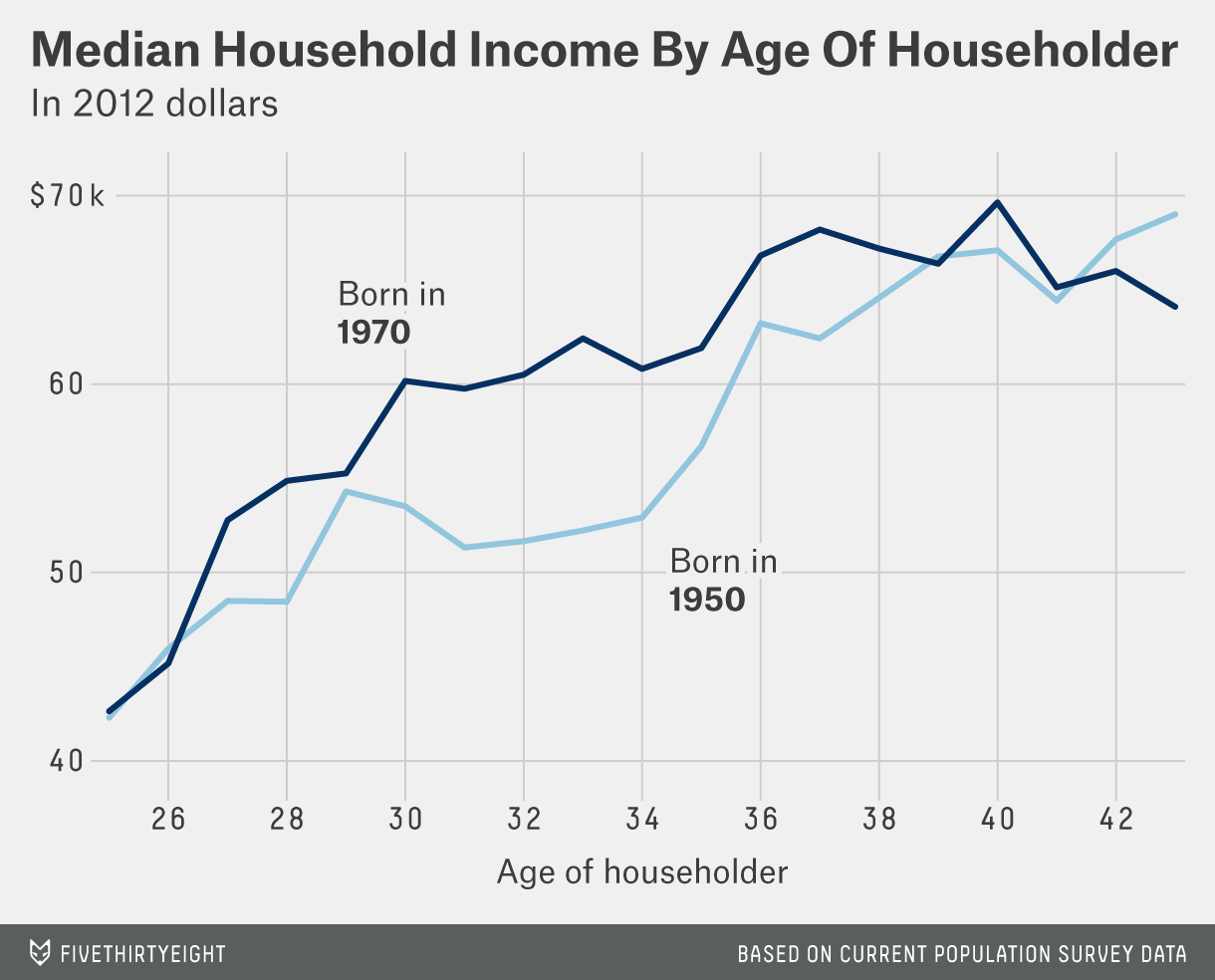 The picture painted by all these figures is the same: The middle class was struggling in the 2000s despite an economy that was, by conventional measures, strong. The recession turned stagnation into an outright decline, and the recovery has thus far been too weak to claw back much of what was lost.