Brown, 17, works 25 hours a week as a fry cook at a McDonald’s down the street from where he lives in Holyoke, Massachusetts. While classmates were at the beach or the mall, Brown was learning life skills — how to behave in a professional workplace, how to multitask when the lunch rush started, how not to talk back when his managers criticized him. He said he hopes the experience will help him get a job after college. And though the pay was low, he was able to buy his own school clothes and save some money toward a car.

“I was tired of having to wait for my mom and ask her for things,” Brown said.

Research has shown that teenagers — and especially teenage boys — who work are more likely to graduate high school, more likely to go to college and less likely to get into trouble with the law. They also gain valuable work experience that can make it easier to get a job and get promoted more quickly in adulthood. But for a variety of reasons — fewer job opportunities, more emphasis on schooling, changing societal expectations — fewer young people are getting summer jobs.

In the 1970s, more than half of teens ages 16 to 19 — and nearly two-thirds of boys in that age range — worked in the summer, according to data from the Bureau of Labor Statistics. In 2014, less than a third did so. The drop has been even more dramatic for 16- and 17-year-olds: Just 20 percent of them worked this summer, down from about 45 percent in the 1970s.1 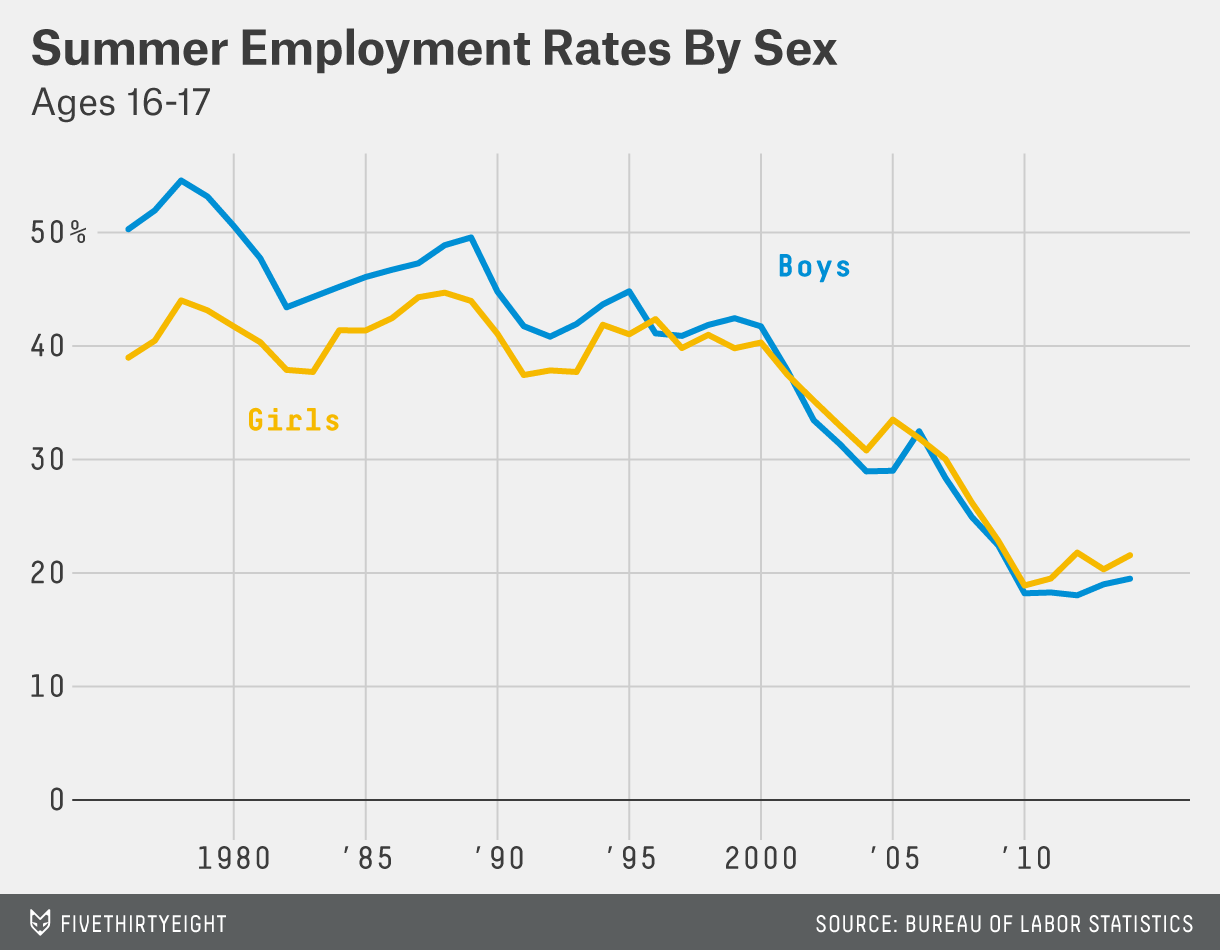 “If kids don’t work when they’re young, a lot of the behavioral traits that are important just don’t get developed down the road,” said Paul Harrington, an economist at Drexel University in Philadelphia who has studied the youth labor market. “These are the ages when you’re making these huge decisions about where you’re going to end up in life.”

New data released by the Bureau of Labor Statistics on Wednesday showed that somewhat more young people worked this summer than last, but their recovery remains slow. Employers are reluctant to hire teens even in the best of times. With unemployment still elevated and plenty of more experienced workers available for hire, companies see little reason to turn to inexperienced and at times unreliable high schoolers.

But the decline in youth employment long predates the recession. Harrington said longer-term forces are also at work, such as the disappearance of many low-skilled jobs that were once the core of the youth job market. Reduced high school dropout rates, increased college attendance and an increased focus on student testing have also likely played a role in pushing down teen employment, particularly during the school year. And Harrington said that as more Americans work into their 60s and beyond, there are fewer opportunities for younger workers to get in on the ground floor.2 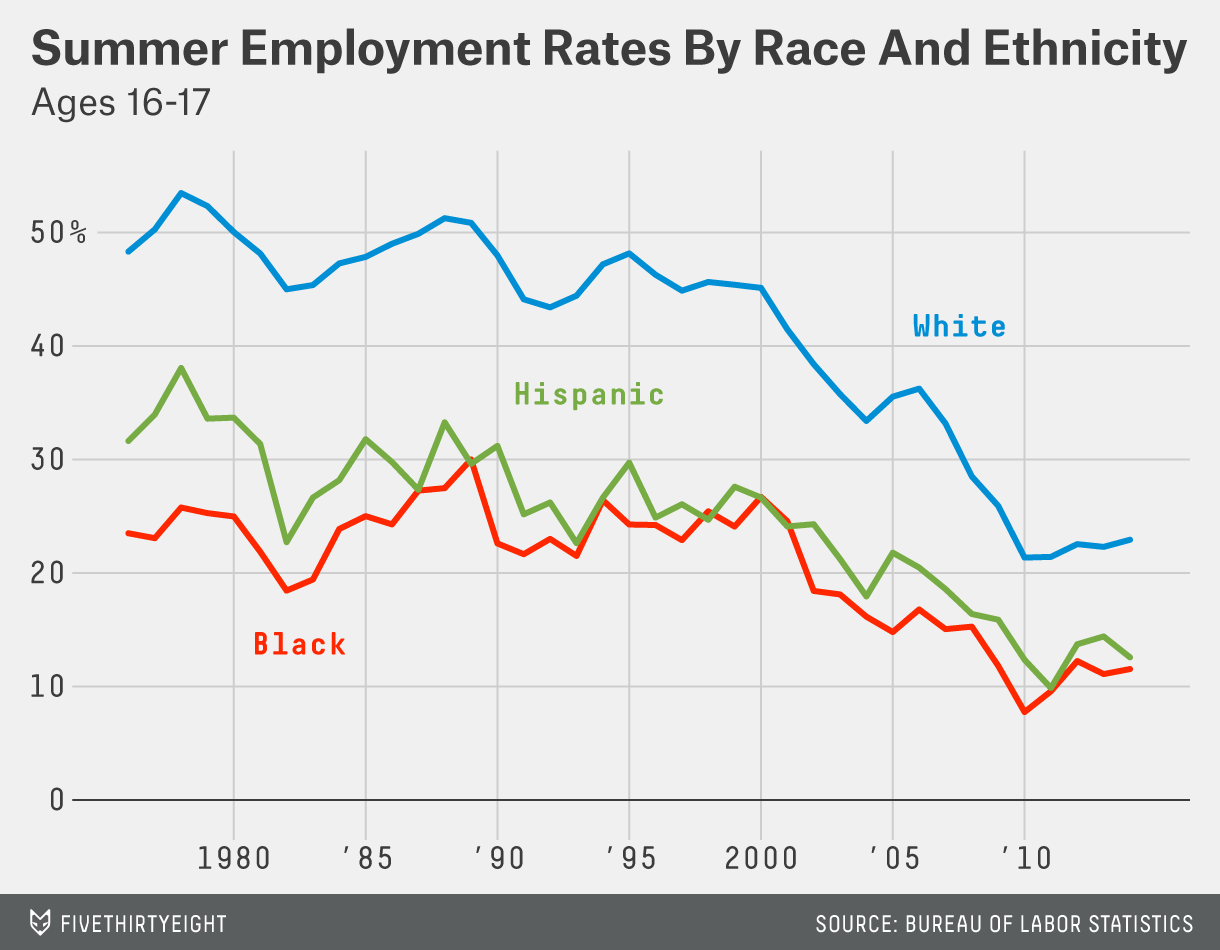 The decline in employment among low-income and minority teens is particularly worrisome to economists because these are the ones who benefit most from early work experience. Teens from more affluent backgrounds might be able to make up for a thin resume with family connections, extracurricular experiences or the ability to accept an unpaid internship. Teens from low-income backgrounds rarely have those advantages.

But for similar reasons, low-income teens often face additional barriers to finding work. Jobs are scarce in many poor communities, and simply getting to work can pose a major challenge. In Los Angeles, for example, city officials said a food manufacturer recently had more than 100 entry-level jobs available for local teens, but at a facility that was inaccessible by public transit. The city ended up working with the company to provide a free shuttle bus.

Other hurdles aren’t so readily overcome. Low-income teens are less likely to have parents who can help them find jobs or navigate the working world once they get them. Nancy Snyder, president of Commonwealth Corporation, a Massachusetts nonprofit that runs workforce development programs for low-income youth, said employers are often reluctant to hire young people without a recommendation.

“For low-income teens, this issue of how do you create someone who can help them connect to the labor market and vouch for them becomes really important,” Snyder said. “They’re probably much less likely to have the connections and network that you use to find a job.”

Commonwealth Corporation has tried to help close that gap, not just by placing teens in jobs but by running training programs on interviewing, resume writing, workplace behavior and other skills to help teens find and keep jobs.

Brown was one of about 5,000 Massachusetts youths who got a job through the program this year. An aspiring architect who hopes to go to Virginia Tech when he graduates from high school next year, he said he’d been looking for a job since the day he turned 17 without success. Now that he has a job, he plans to keep working during the school year in part because his mother will give up her low-wage job to return to school in the fall. Besides the income, Brown said the job has helped him learn to communicate with adults and manage his emotions, even when he thinks he’s being criticized unfairly. It’s helped his organizational skills, too, he said.

“Working at McDonald’s, because it’s so busy, I was able to multitask and actually get things done,” he said.