This is In Real Terms, a column analyzing the week in economic news. Comments? Criticisms? Ideas for future columns? Email me or drop a note in the comments.

The image of the 20-something still living in his parents’ basement has become a well-worn media trope in recent years. And unlike some common claims about millennials, this one is true — today’s young people really are living at home longer. In 1960, according to census data,1 less than one in six 25-year-olds still lived with mom and dad; in 2014, nearly one in three did. (Separate data from the Current Population Survey, which is used in the chart below, suggests that the trend continued in 2015.2) The Pew Research Center this week reported that for the first time in well over a century, more young people are living with their parents than with a spouse or partner. 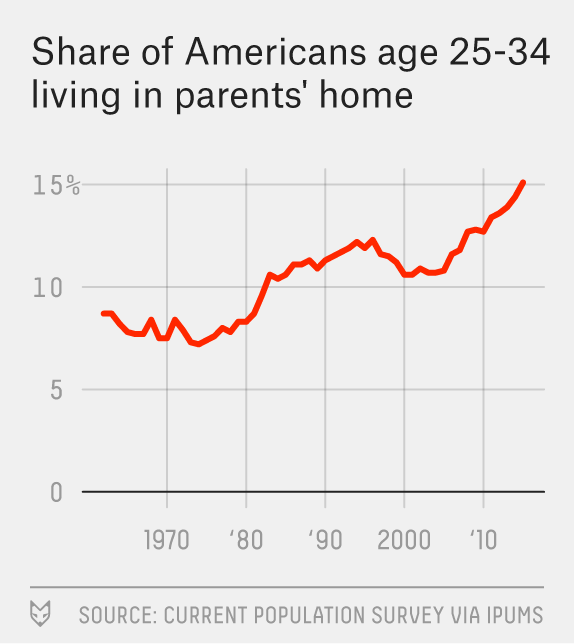 It’s tempting to blame the trend on the economy. As this chart shows, the share of young people living with their parents was pretty steady in the 1980s and 1990s and then rose rapidly after 2005, right when the economy was turning south. But that makes the continued rise in the number of people living with their parents seem like a bit of a mystery. After all, the economy has improved significantly in recent years: The unemployment rate for Americans ages 18 to 34 was 7.4 percent in 2015, down from 12.7 percent in 2010.

It turns out, though, that the recession wasn’t what led millennials to move back into their old bedrooms (or to not leave in the first place). Rather, long-run shifts in demographics and behavior have been pushing them in that direction for decades. Most importantly, Americans are waiting longer to get married, a trend that long predates the recession. Other long-run trends in education, childbearing and racial diversity (blacks and Hispanics are more likely to live with their parents and are a growing share of the young adult population) have also played an important role. Economist and FiveThirtyEight contributor Jed Kolko recently found that demographic trends explain the entirety of the 20-year increase in the share of young adults living at home.

That doesn’t mean the economy is irrelevant, though. The strong job market of the early 2000s overcame the demographic forces, allowing young singles to afford their own apartments and essentially suppressing the living-with-mom trend until the Great Recession hit. A similarly strong economy could in theory have the same effect today.

So why haven’t young people started to strike out on their own? There are probably two reasons. First, the economy has improved for them, but it still isn’t great. As I’ve written before, the unemployment rate understates the number of people who are out of work, and millennials who do have jobs are often working part time or for low pay. That’s especially true for people without a college degree, who are also the ones most likely to be living at home.

Second, even when young people have good jobs, they often face financial pressures that weren’t as common in past generations. Specifically: more debt and higher rent. Roughly 15 million Americans under 30 owed a combined $322 billion in student debt at the end of 2012, according to data from the Federal Reserve Bank of New York. (It’s easy to blow this out of proportion, however: New data from the Cleveland Fed this month showed that the typical 20-something borrower pays about $200 a month in loans.) Meanwhile, rents have been rising rapidly in recent years and are particularly high in big cities, where young people are most likely to live.

The good news for millennials — and their beleaguered parents — is that the improving economy should help boost wages, making it easier for young people to pay their loans. The bad news, though, is that it also likely means rents will keep rising. Don’t expect to get that spare bedroom back anytime soon.

The Wall Street Journal this week highlighted a potentially worrying sign for the economy: Companies are pulling back on temporary hiring. For most of the recovery, the share of workers that are employed as temps through staffing agencies has been rising, hitting an all-time high at the end of last year. So far this year, though, temp employment has been pretty much flat and has fallen slightly as a share of all jobs.

That might not sound like a bad thing. After all, temp jobs are typically low-paying — average pay is less than $17 an hour — and are by definition unstable. Many labor groups have seen the temp hiring boom as a troubling sign of eroding worker protections. But as the Journal notes, temp hiring can be an early sign of trouble in the job market. Companies are often reluctant to fire workers when business slows, but it’s easy to let temporary contracts lapse. Temp hiring was one of the first indicators to slow before the last recession and was one of the first to pick back up again.

But temporary hiring doesn’t have a perfect record as a predictor; it flattened out in the mid-1990s, for example, right before the job market entered a historic boom. And even if it is a warning sign this time, it doesn’t mean a recession is imminent. In the last cycle, temporary employment peaked in late 2005, two years before the recession hit. Still, it’s an indicator worth watching in the months ahead.

Immigrants, they get the job done

The numbers are a reminder of the role immigrants play in the U.S. economy. The participation rate for the overall population has been falling for a decade and a half and is now near a three-decade low. That means there are fewer workers trying to support a rapidly growing population of retirees. Immigrants, most of whom come to the U.S. to work, are an important part of filling that gap.

Number of the week

In nearly 60 percent of U.S. counties, more businesses closed their doors than opened them from 2010 through 2014 — a severe entrepreneurial slump during what was supposedly an economic recovery.

That finding comes from a new analysis of census data from the Economic Innovation Group, a research and advocacy group backed by a tech-heavy group of investors, including Napster co-founder Sean Parker. In most of the country, closings outpaced openings, a trend driven mostly by a steep drop in startups. Meanwhile, a relative handful of counties, mostly those in big metropolitan areas, accounted for most of the new businesses that were formed during the period.

The findings aren’t necessarily a surprise. Nationally, entrepreneurship rates have been falling for three decades, a worrisome trend that economists don’t fully understand. But the report emphasizes how economic opportunity is becoming increasingly concentrated in the biggest cities, while smaller cities and rural areas struggle.

More than a quarter of Americans live in counties that have seen their populations decline from their peaks, according to Lyman Stone, who notes that this data is much harder to track down than it should be.