In theaters Friday, “Straight Outta Compton” tells the story of the hip-hop group N.W.A., five young rappers from Compton, California, who revolutionized rap and its place in the mainstream music industry in the 1980s.

Unlike documentaries, which typically include raw footage and interviews, biopics are dramatizations, loosely based on the real-life events of actual people. Biopics offer an interpretation of lives deemed important (and profitable) by Hollywood, and they often try to make a statement about their subjects’ historical or cultural significance. So which figures filmmakers spotlight matters, as does whom they ignore (or can’t get the funding to feature).

Women don’t fare much better in the genre than people of color — there is only one2 biopic about a woman in U.S. theaters this summer,3 and only about a quarter of all biopic subjects are women. That’s according to my analysis of IMDb data on biographical films released from 1915 through 2014.4

Apparently, the people with important lives are white men. Since the early 20th century, more than 80 percent of biopicture subjects whose race or ethnicity I was able to determine have been white, and 77 percent of subjects have been men. The genre has seen vast improvement in the presence of women and people of color, but Hollywood biopics still tend to reproduce to a greater degree the stories of white men from all corners of society. 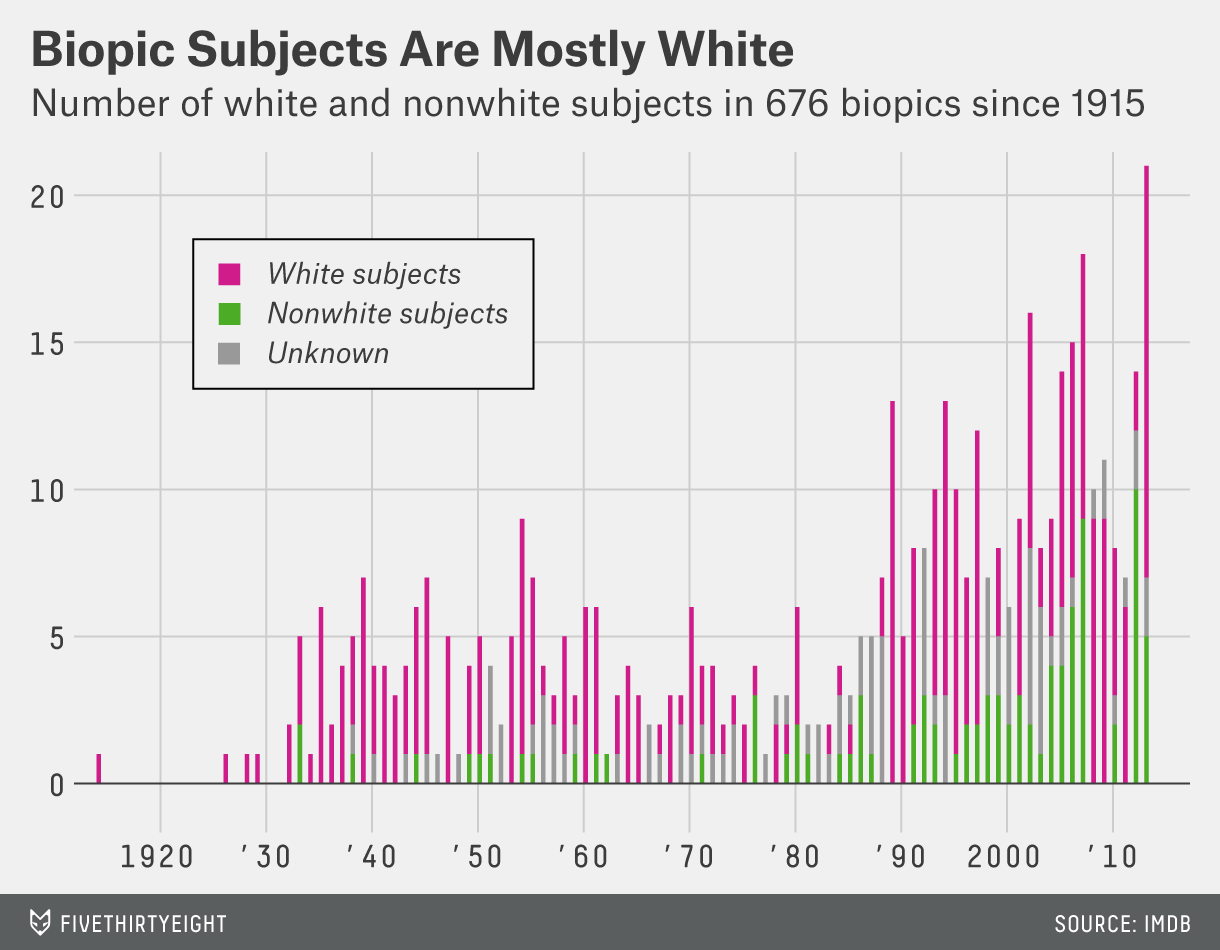 This is not particularly shocking — our friends at Fusion recently found similar results analyzing 120 critically acclaimed and high-grossing biopics. We know Hollywood is a predominantly white, male-dominated space. The latest report from the Media, Diversity & Social Change Initiative at the University of Southern California on the representation of race, gender and LGBT status in film found that nearly three-quarters of all speaking or named characters in the top 100 highest-grossing movies of 2014 were white, and 7 in 10 were male.

Women of color are the worst-represented demographic group among biopic subjects I looked at. By my analysis, just 21 biopics have been about women of color. And even when a biopic is made about a person of color, the actress cast to play her might be white. Cleopatra was the subject of three of the 21 films about women of color, and the Egyptian queen was played by a white actress every time. White actors played people of color in 20 other biopics, too, from Marlon Brando as Mexican revolutionary Emiliano Zapata in “Viva Zapata!” (1952) to a film as recent as “A Mighty Heart” (2007), in which Angelina Jolie played journalist Mariane Pearl, who is of Afro-Chinese-Cuban descent on her mother’s side.

To get these numbers, I searched IMDb for feature films categorized within the “biography” genre and released in the United States, the U.K. or Canada since 1900. I was looking specifically for the people Hollywood chose to profile for a U.S. audience. A total of 676 films featuring 761 subjects were included in the sample. Since the characters in the film were often based loosely on an actual person, I found the real name of each subject and his or her demographic information. This is by no means a comprehensive list, since many biographical films overlap with other genres, such as drama and musical, and are therefore classified as something else. For example, both “Norma Rae” (1979) and “Belle” (2013) are based on true stories but are classified on IMDb as drama, and drama and romance, respectively. A number of biographical films may be missing from the sample as a result, but this analysis is a place to start. (There’s more information on my methodology in the footnotes.5)

The racial and gender imbalance in biopics isn’t just the product of an imbalanced industry. It also reflects societal structures and values, several film historians told me. Early biopic subjects were figures with prominent public lives — the “great white men” of the early 20th century who controlled the social, political and economic structures of the time, in other words, the context in which the films about them were made.

“In the macro sense, you can’t separate obviously the production of biopics from the larger culture of society and the industry itself,” said filmmaker Frances Negrón-Muntaner, a professor at Columbia University. “Often biopics are about ‘important people,’ and I think the farther back you go, the more ‘great men’” you see.

These great men were (and to some extent still are) celebrated as the heroes of the modern world without much contest, while the few women and people of color who were subjects of films at this time were famous because they were anomalies. It was sharpshooter “Annie Oakley” (1935) and physicist Marie Curie (“Madame Curie,” 1943) — both women who rattled social norms. The latter film in particular made abundantly clear its subject’s exceptional status as a woman in a man’s field, said Dennis Bingham, English professor and director of film studies at Indiana University–Purdue University Indianapolis.

“The amount of dialogue that has to be devoted to people marveling over the fact that she’s a woman, and it still has to show that she can bake bread, be a mother,” he said. “Having a leadership role, being in a field traditionally thought of as male, it’s so exceptional that the film has to keep pointing that out.” 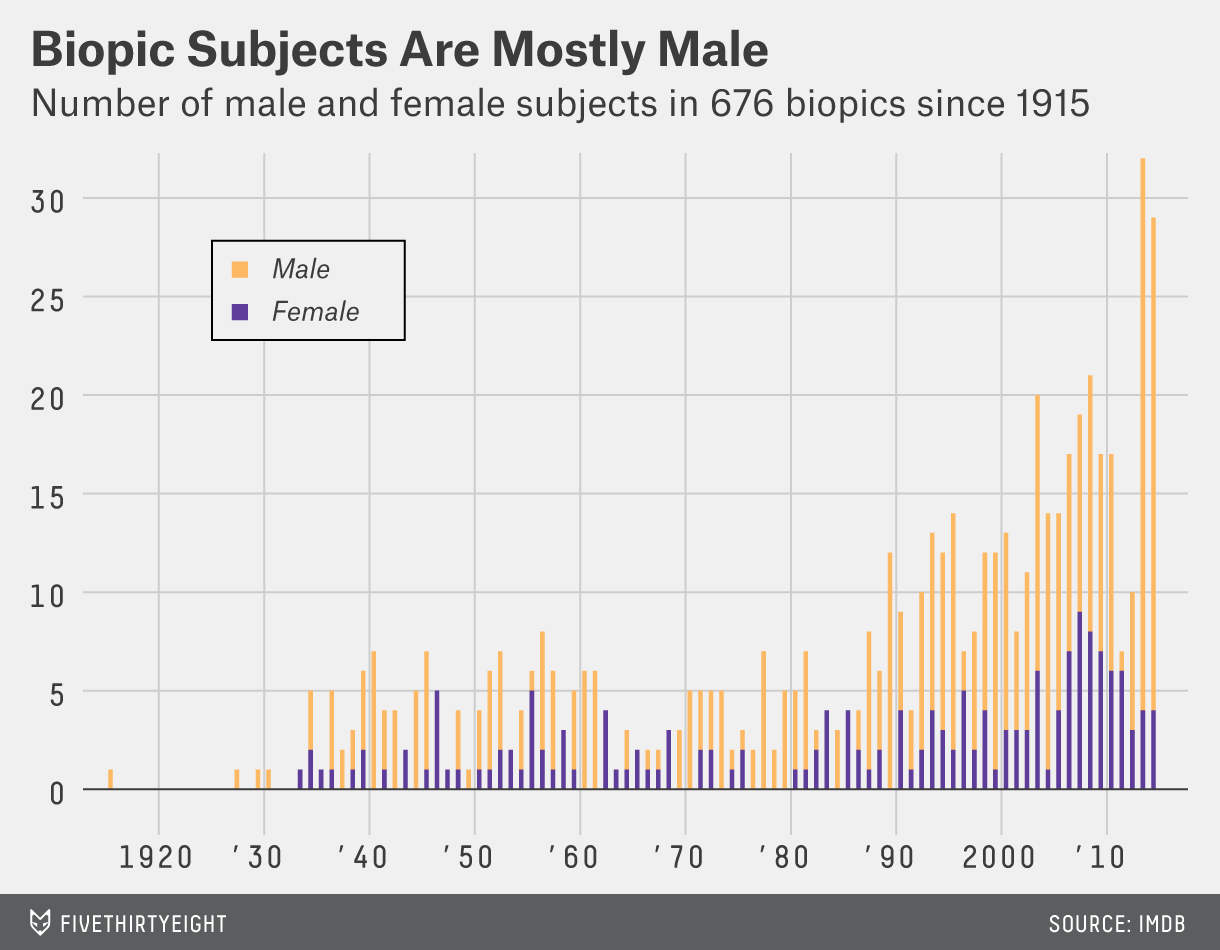 Films made about women and people of color emerged more frequently when the genre shifted midcentury from portraying the leaders of the modern world to portraying cultural figures — from Abraham Lincoln and Thomas Edison to model and actress Edie Sedgwick and boxer Muhammad Ali. Still, until the 1980s, the number of films released per decade about a person of color was in the single digits. Since then, in any given decade, there have been at least three times as many white subjects as subjects of color. In the ’90s, white subjects outnumbered subjects of color by a factor of six. 6

And the ratio of male to female subjects per decade has consistently been about 3 to 1 since Sweden’s Queen Christina was the first female subject of a biographical film, one produced by MGM Studios in 1933.

With the transition toward subjects from popular culture came a new trend of depicting people “warts and all,” such that films aim to divulge the hairy details of the subject’s personal life. Bingham has noticed in his research on biopics that this approach is especially common for women.

“It struck me right away that the women who did not have a lot of serious trouble in their lives, who are pretty much successful, those aren’t the lives that movies are made about because it doesn’t fit the ideology; it isn’t considered interesting,” Bingham said.

Twenty-three percent of the women featured in my sample of biopics are entertainers — “showgirls,” actresses, dancers and singers. Many of these women are shown suffering, either failing in public life or depending on a man to succeed. In “Ciao Manhattan” (1972), Sedgwick is propelled to stardom by artist Andy Warhol but experiences the perils of fame — “from fame to shame,” as the tag line puts it. Actress Lillian Roth, the subject of “I’ll Cry Tomorrow” (1955), spirals downward as she faces catastrophic relationships and drug addiction.

From a business perspective, biopics come with relatively high costs because they have to re-create moments in history, so a subject is often chosen only if her life story has enough drama and entertainment value to fill theater seats. Given the industry’s power structure and what has made for successful biopics in the past, Bingham thinks there is a glass ceiling for budgets of films about people of color and women. If the studio has decided that a particular subject or film is not going to reach multiple viewer demographics, the studio will be more reticent about spending the money.

Perhaps as a result, the people of color featured in biopics overwhelmingly are entertainers (musicians and athletes, in particular) or activists; nearly half of those in our sample fall within these three categories.

Just 44 of the 564 subjects with known race or ethnicity in our sample were black, nine of whom were African. Among the 35 African-American subjects, just five were women. Two films featured black activists in America: Malcolm X and Martin Luther King Jr. Most of the other African-American subjects (67 percent) were either athletes or entertainers, including one comedian, Richard Pryor.

“I truly believe that the film industry has been instrumental in promoting a vision of America that has marginalized and stigmatized blacks,” said Jeffrey Sammons, a history professor at New York University. Hollywood executives “don’t want to promote heroes among those people who are strong and forceful and confident and bright, whether it’s a black scientist or artist. You get musicians but certainly not statesmen.”

The only black world leader included in the sample was former South African President Nelson Mandela.

And while there were 26 Hispanic subjects, as far as I could determine, just one — Selena Quintanilla-Perez — was Latina, and six were Latino (Latina and Latino refer to U.S.-born Hispanic people). The remainder of Hispanics in the sample were Latin Americans or Spaniards, many of whom were of European descent, i.e., white. (See: Madonna starring as Eva Perón in “Evita” (1996).)

The genre has certainly seen improvement in diversity, especially because of the work of women and people of color who direct, produce and write in Hollywood. But the discrepancies remain stark. Bingham believes there is an emerging trend toward films made for television, especially films made for and about people of color, which do not have to be pitched to such a mass audience. (Netflix, too, might offer additional opportunities to reach audiences on a smaller scale.) Queen Latifah recently starred as singer Bessie Smith in HBO’s “Bessie,” which joins other made-for-TV biographical films such as “Behind the Candelabra” about pianist Liberace and “Temple Grandin” about the animal-husbandry expert who has autism. These films reflect diversity in racial, gender and LGBT status but would not appear in our sample because they are not feature films.

“It’s going to be really interesting to see where this all ends up, with so many filmmakers going over to television, not because they’d rather work on television, but because they can get projects made that theatrical Hollywood wouldn’t look at,” Bingham said.

CORRECTION (Aug. 14, 12:50 p.m.): An earlier version of this article incorrectly said that there are no biopics about women in theaters this summer. There is one, “Testament of Youth,” which came out in the U.S. in June but was released in the U.K. last year.