Now that the dust has settled on the penultimate week of the NFL season, 10 teams have clinched playoff spots and 16 more have been eliminated.

The Philadelphia Eagles are in the latter column. Back in Week 1, Benjamin Morris (who’s on vacation this week) and I made a chart showing how often teams have made the playoffs since 1990, given their records at various points during the season. Take a look at the Eagles’ progress through the playoff “grid.” 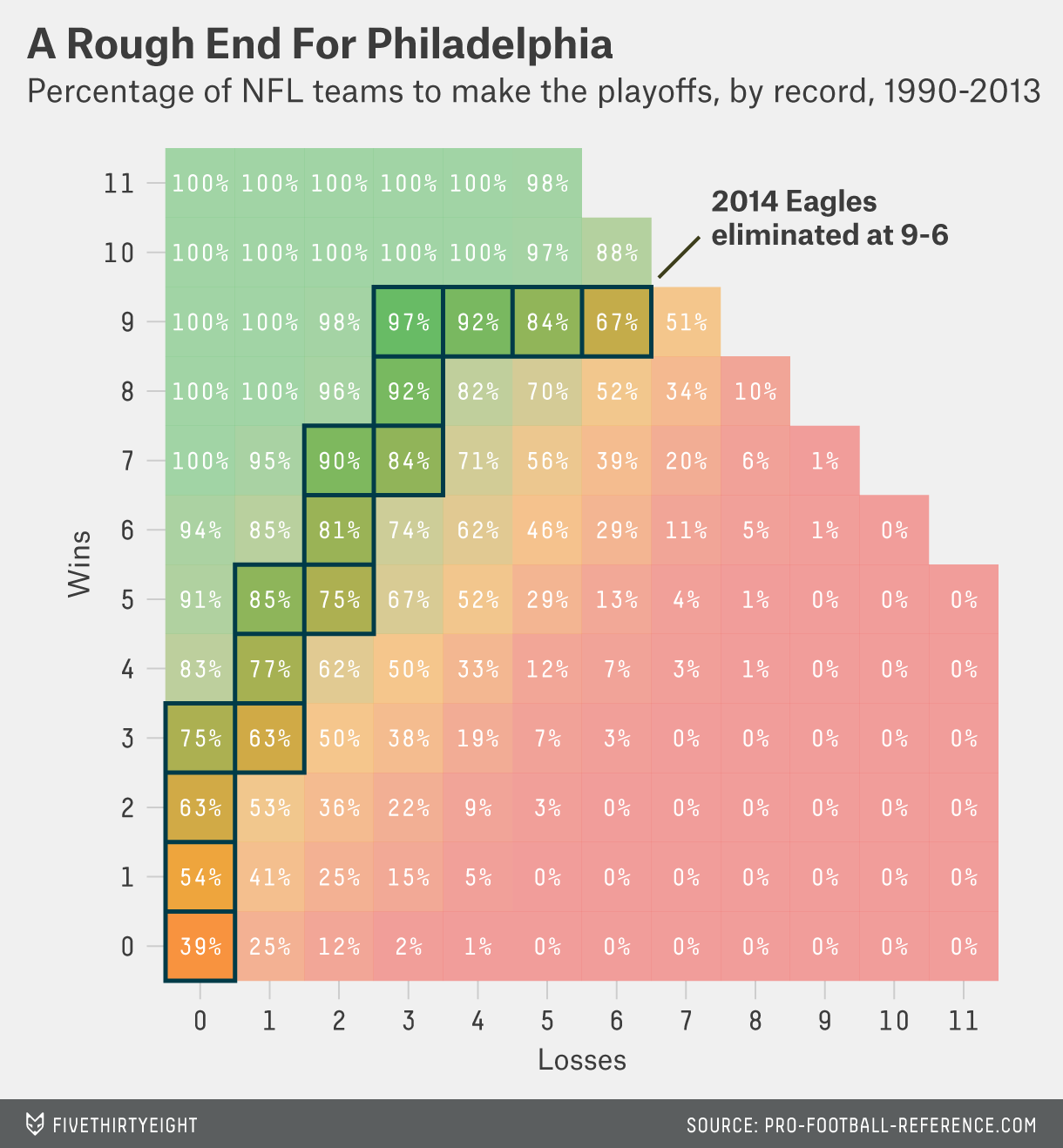 The Eagles sat at 9-3 through Week 13. From 1990 to 2013, just two teams, the 1993 Miami Dolphins and the 2008 Tampa Bay Buccaneers, managed to miss the playoffs after starting with that record. The 2014 Eagles now join them, dropping three straight to Seattle, Dallas and, worst of all, lowly Washington, thanks to two field goals missed by Cody Parkey and a killer Mark Sanchez pick.

Because the NFL is cruel and unfair, here’s the same chart for the Atlanta Falcons: 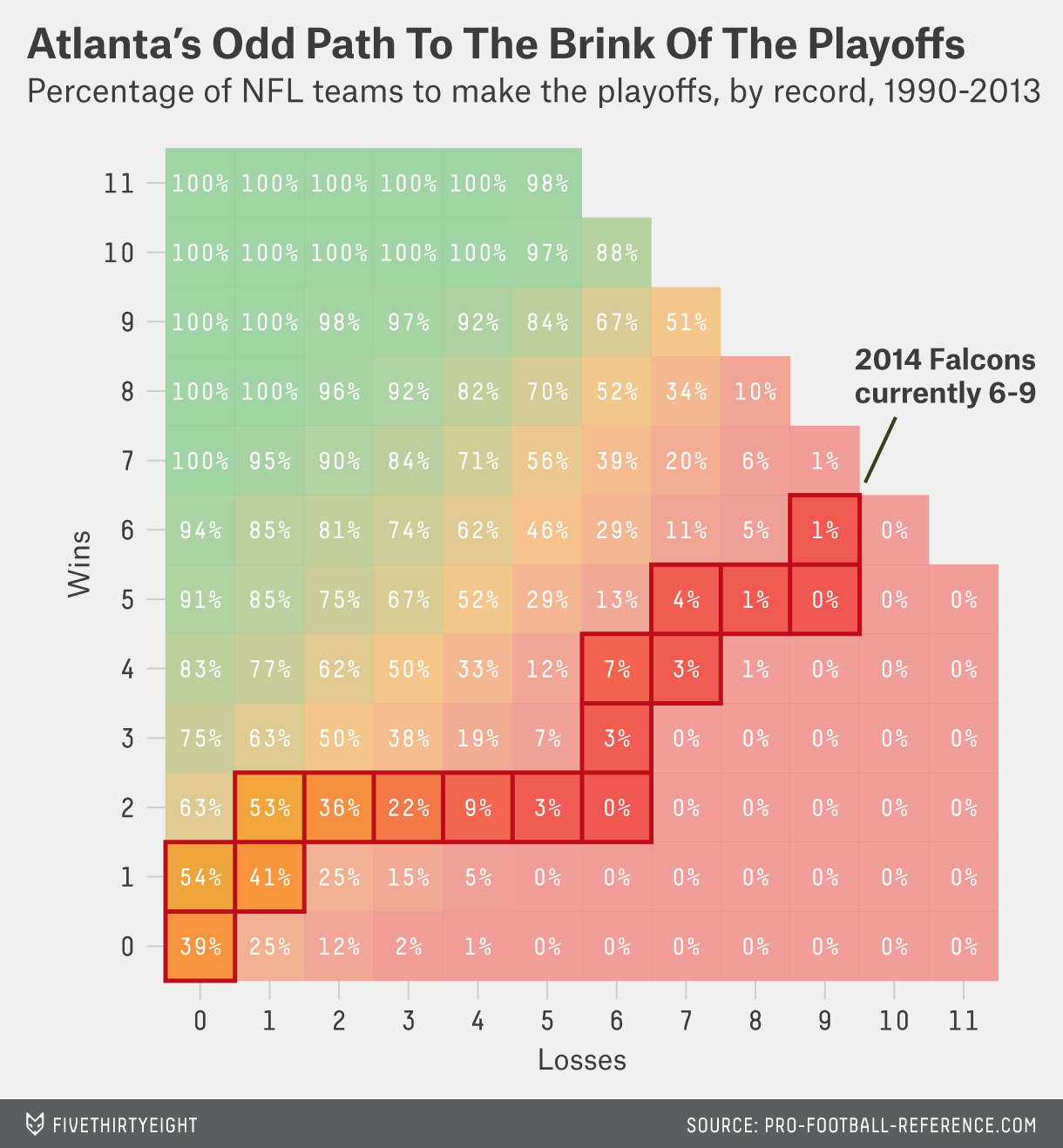 This sort of mediocrity could be short-lived. The first and only 7-9 team to make the playoffs was the 2010 Seattle Seahawks, a member of the 14th-worst division in the history of the NFL. Three seasons later, the Seahawks were Super Bowl champions and the NFC West was the second-best division in NFL history, winning 30 of its 40 non-division games. Make fun of the Falcons — and the NFC South — while you still can.

The worst division in history

Speaking of, time to get in our NFC South shots. Going into Week 16, the teams in the NFC South had 9.5 wins against non-division opponents in 38 chances this season (counting Carolina’s tie against Cincinnati as half a win). That .250 winning percentage matched the 2008 NFC West, which ended the season with just 10 non-division wins. Last week, Tampa Bay did its part by getting smoked by the Green Bay Packers, but a fourth-quarter Carolina comeback against Cleveland pushed the division to 10.5 wins, giving the NFC South a .263 winning percentage.

This means that the 2008 NFC West remains the worst division in sports history. The table below shows all 897 division-seasons that have taken place in the four major American sports leagues since divisions were instituted.1 These seasons are sorted by winning percentage in non-division games.2

But there’s a way to correct for this a bit. There’s a possibility that the 2008 NFC West really was average in quality, but just unlucky. We can employ a binomial distribution to figure out the likelihood that was the case, calculating the chances the NFC West would get 10 or fewer non-division wins in 40 games if it were a .500-level division. The 25 worst divisions by this measure are listed below. (In order to use a binomial distribution we have to omit ties, which is why these records are a little different than those in the sortable table above.) 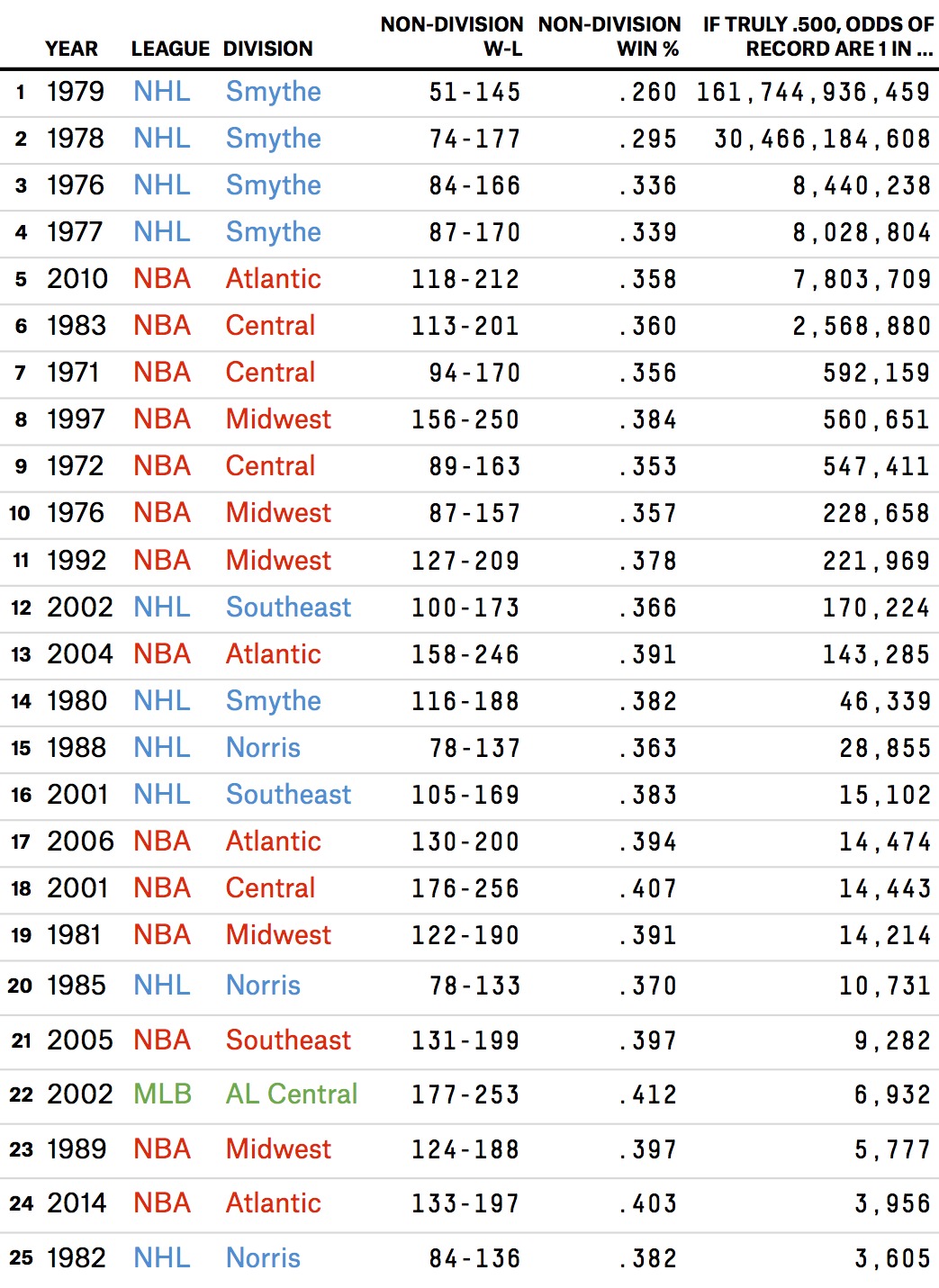 There are other mathematical ways to go about this, and one could also argue that the NFL’s small sample size means that non-divisional records aren’t necessarily a great measure of quality. (The 2014 AFC South has a lower cumulative Elo rating than its NFC equivalent.) For now, let’s agree that the Smythe Division was pretty bad in 1978-79 and so is the NFC South in 2014.

A freshman year to remember

Week 16 is a great time to make fun of terrible preseason predictions, but some pundits got it right. The 2014 wide receiver draft class was touted as one of the best and deepest in NFL history.3 It has certainly lived up to the hype. 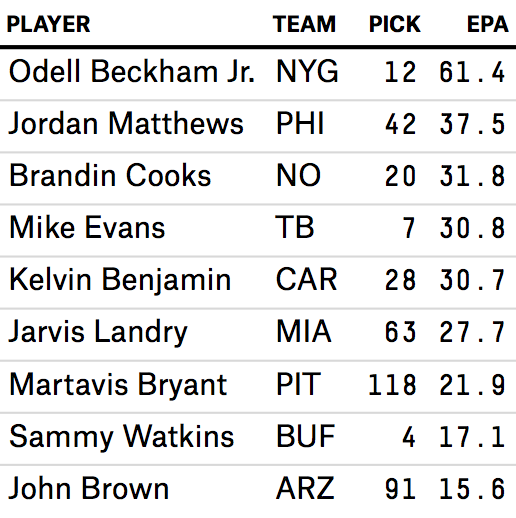 Odell Beckham Jr. has been the most dominant, but he’s far from the only rookie receiver to have an immediate effect. The table on the left shows the draft pick and expected points added (from Advanced Football Analytics) for the nine best rookie wide receivers in the league. Note that the New Orleans Saints’ Brandin Cooks suffered a season-ending injury in Week 11, truncating his production. He was arguably the Saints’ best receiver up to that point.

It’s not normal for this many rookie receivers to do so well: 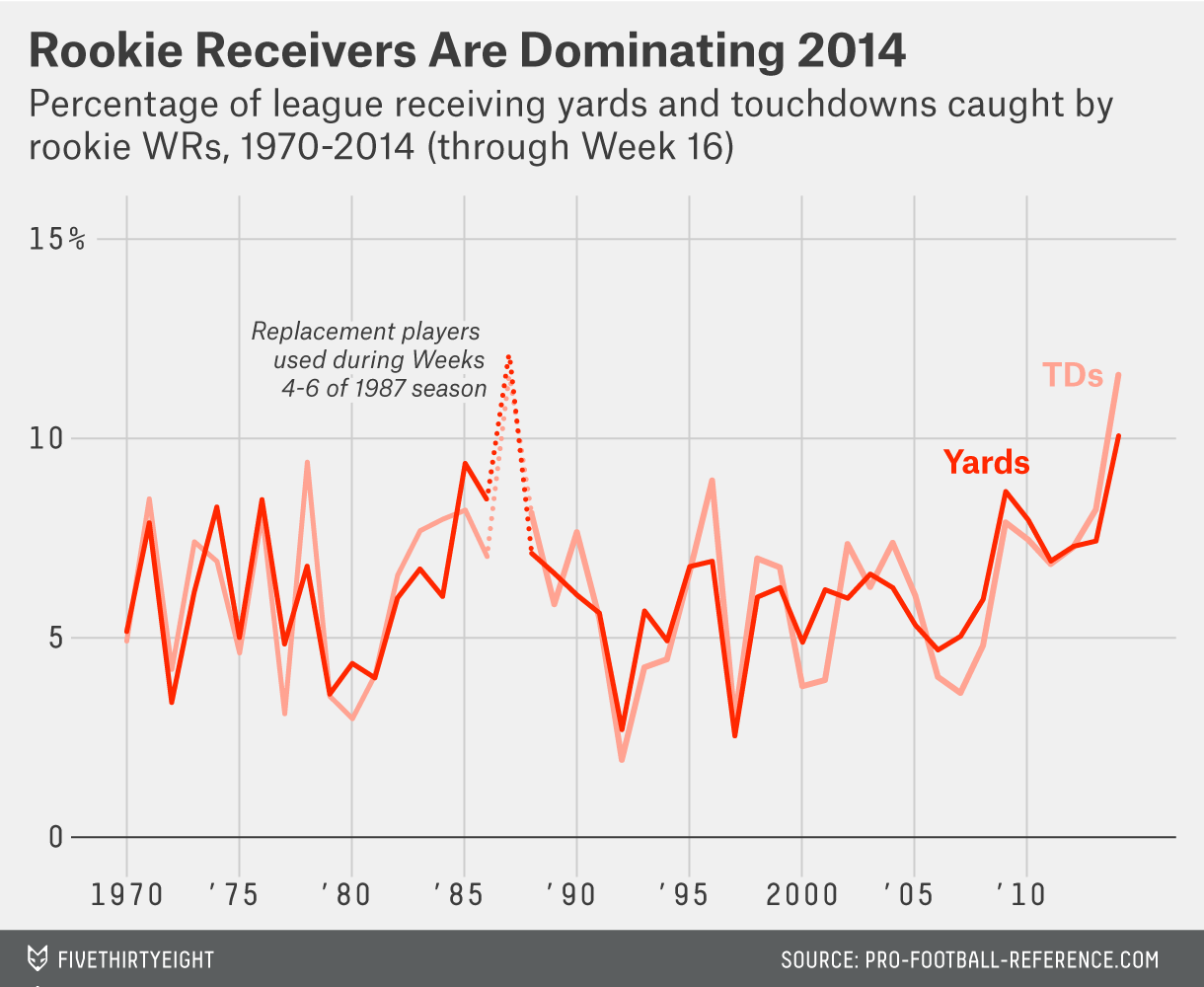 This season, rookie WRs have contributed 10.1 percent of the league’s receiving yards and 11.6 percent of its receiving touchdowns. Those are the highest figures since the merger, excluding the 1987 season, when replacement “rookies” were brought in from Weeks 4 through 6 to break a players’ strike.

Let’s return to Beckham, who has had 90+ receiving yards in eight straight contests. Ninety yards is a great game but not an extraordinary one — 12 other receivers had 90+ yards in Week 16 — so stringing together a bunch of them doesn’t sound so impossible. And yet, since 1960, there have been just 16 streaks of 90+ yards in at least six games. Only five players have a streak of at least eight games: 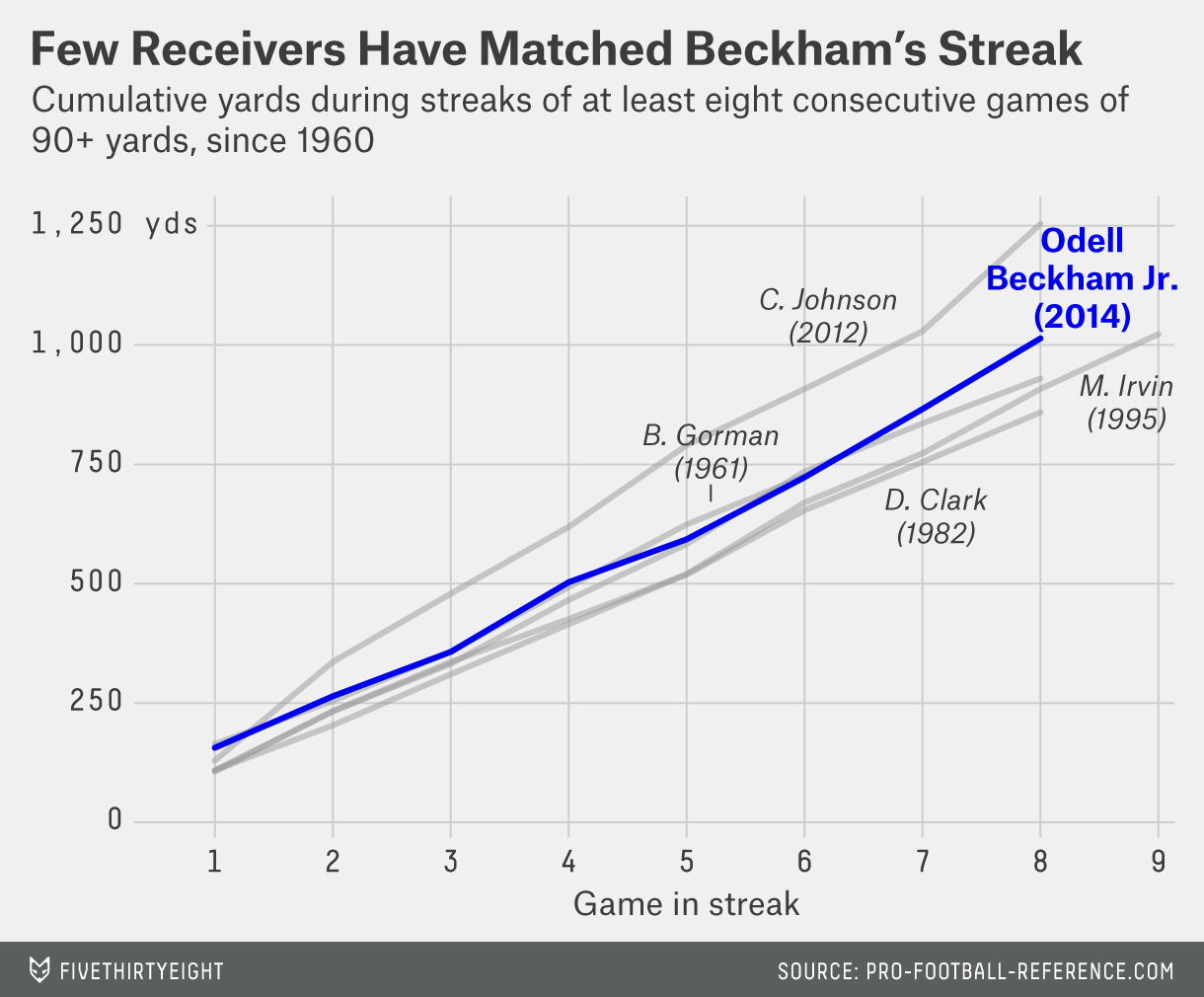 The chart above shows the yards that Calvin Johnson (2012), Michael Irvin (1995), Dwight Clark (1982), Bill Groman (1961) and now Odell Beckham Jr. (2014) accumulated during their respective streaks. Johnson is the only one to top Beckham’s yardage through eight games, and that 2012 run is probably the best stretch of receiving in NFL history. In Week 17, Beckham will try to tie Michael Irvin’s streak of nine games, against the Eagles in a game of no other real consequence.

In fact, a lot of games are of very little consequence this week. Thanks to Philadelphia’s loss to Washington, the NFC wild-card race is already wrapped up, while Cincinnati’s Monday night win leaves just one spot available in the AFC. If you root for one of the 14 teams with playoff berths or seeding on the line (or one of the two in contention for the top draft pick), you can check out some Week 17 game scenarios in the interactive below. For everyone else, enjoy your week off.