Last month, voters in Washington decided that the state’s classes were filled with too many kids. A ballot initiative seeking to limit class sizes to 17 students for kindergarten through third grade and to 25 students for all others squeaked by, garnering only 51 percent of the vote. But a majority is a majority, and now the state must cut class sizes at every grade level — meaning it needs to hire thousands of new teachers, counselors, teaching assistants and librarians.

The initiative will cost nearly $5 billion through 2019, a hefty sum considering that the state’s current two-year budget for public education is around $15 billion.

But it’s unclear where the money will come from. Or if it’s even worth spending.

Washington ranks 47th in the nation in pupil-to-teacher ratio, in part because the state legislature doesn’t have a good track record of funding education. In 2012, the Washington State Supreme Court ruled the legislature had failed to uphold its “paramount duty” to fully fund the state’s educational system. Two years later, this past September, the court announced that it was holding the state in contempt for failing to comply with the funding order. 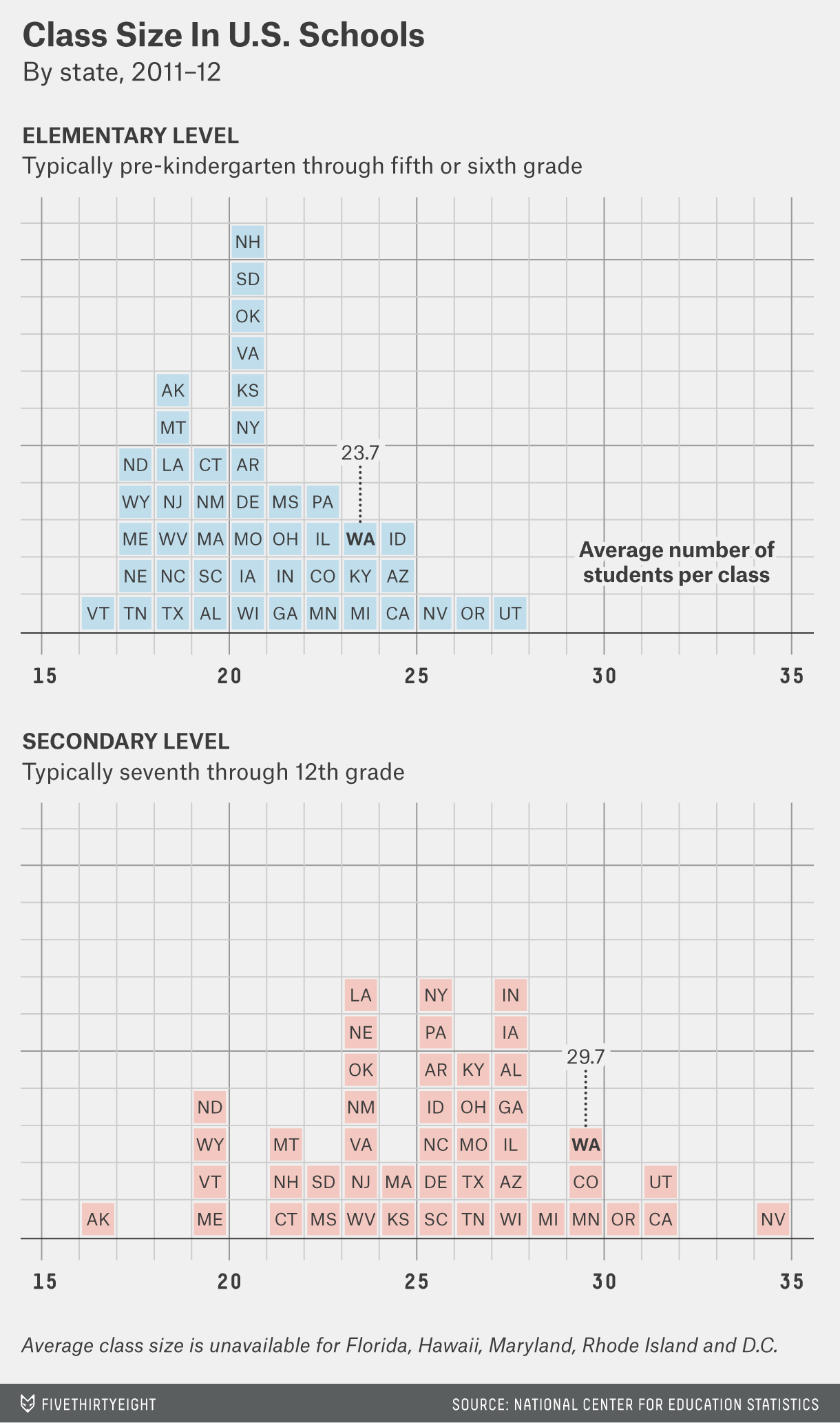 But now it will have to find $4.7 billion over the next five years to pay for the class-size reductions. That’s in addition to the $3 billion the legislature will need to spend over the next four years to comply with the Supreme Court decision.

State politicians could amend the initiative with a two-thirds vote, but getting that much consensus could be a challenge in the deeply divided legislature. “It will be very difficult to change,” Ross Hunter, the chairman of the House budget committee, told a local news station in November. “But it’s also very difficult to imagine a scenario where you could raise enough taxes to pay for it, or cut enough out of the social service budget in order to pay for it. Either of those things seem very, very hard to do.”

The legislature is in this position because of I-1351, the ballot initiative that instructed the state to “allocate funds to reduce class sizes and increase staffing support for students in all K-12 grades, with additional class-size reductions and staffing increases in high-poverty schools.” The measure was backed by the state teachers’ union, which touted it as a common-sense solution to a dire problem. Taking the issue to the voters, I-1351’s supporters said, was the only way to hold recalcitrant legislators accountable.

“Reducing class size is very well supported,” said Mary Howes, the I-1351 campaign manager. “It’s the right thing to do for our kids, and we want to make sure the legislature stops making excuses when it comes to their future.”

But cutting class sizes isn’t the cure-all some make it out to be. Class-size reductions make sense intuitively — in smaller classes, kids get more attention, distractions are reduced and working conditions are improved. Many economists and education policy experts say, though, that this isn’t a case where the common-sense fix is guaranteed to be the best fix. Many of the studies on class size are inconclusive, and even those who support cutting class size in theory are dubious about whether I-1351 is the best or most cost-effective way to improve public education in Washington.

“I think class-size reduction is a smart and sound policy in lots of cases,” said Diane Whitmore Schanzenbach, an associate professor of human development and social policy at Northwestern University. “But as an economist, I have to think about what would be the best use of the next dollar spent, and for an across-the-board reduction of this magnitude, the evidence just isn’t there.”

When defenders of small classes are asked to produce data to support their case, the first place they turn is a randomized class-reduction experiment conducted in Tennessee in the mid-1980s dubbed Project STAR. Researchers randomly assigned students and teachers in 80 schools to small classes with an average of 15 students or regular classes with an average of 23 students. The students stayed in their randomly assigned category from kindergarten until third grade, when the students in the small classes returned to regular classes. The students in smaller classes tested better — these differences were particularly pronounced among disadvantaged students — and subsequent longitudinal analyses found that the gains followed them through their educational careers. For black students, the higher test scores translated into higher rates of college attendance.

But findings like these don’t necessarily translate into good policy. Project STAR is the gold standard in class-size reduction literature because it’s the only randomized study on the issue that’s been conducted since the early 20th century. Attempts to implement large-scale class-reduction policies have yielded less encouraging results. In 2002, Florida voters approved a ballot initiative like I-1351 that amended the state constitution to include caps on class sizes in all grades. An analysis of data from Florida conducted by Matt Chingos, a senior fellow at the Brookings Institution’s Center for Education Policy found no differences between students who were new to a small classroom and those who had already been in one.

One of Chingos’s biggest reservations about I-1351 is the price. Florida’s program cost $20 billion over eight years, about the same as the estimates for the Washington initiative. And Project STAR was estimated to cost about $400,000 for each student who eventually went to college, compared to $133,000 for HeadStart. “Reducing class size is one of the most expensive things you can do in education,” Chingos said. “Even if it does have a substantial positive effect, it still might not be the best use of limited resources.” He said that in some cases, raising teacher salaries could be a more effective use of funds. “Really the lesson is that you want to build in flexibility,” he said. “Different school districts have different needs. It’s very far from one-size-fits-all.”

Eric Hanushek, an economist at the Hoover Institution at Stanford University, said that I-1351 could have the unintended effect of reducing teacher quality. “This isn’t about hiring high-quality teachers, it’s about hiring more teachers, and that means we’re going to see a lot more inexperienced teachers in the classroom,” he said.

That could matter for students’ future earning potential. In a recent paper, Hanushek calculated the economic value of good and bad teachers, combining the “quality” of a teacher — based on student achievement on tests — with the lifetime earnings of an average American entering the workforce. He found that a very high-performing teacher with a class of 20 students could raise her pupils’ average lifetime earnings by as much as $400,000 compared to an average teacher. A very low-performing teacher, by contrast, could have the opposite effect, reducing her students’ lifetime earnings by $400,000.

Some education advocates in Washington state are concerned that the class-size mandate will siphon funds from other policies. Frank Ordway, the director of government relations for the League of Education Voters, an education advocacy nonprofit, said the group’s board voted to oppose the measure because it is worried that the state, in an attempt to balance the budget, will cut spending on other educational services. “It’s basically going to put all of our education votes into one basket,” Ordway said.

Meanwhile, it’s not clear whether Washington’s class-size problem is as dire as I-1351’s supporters claim. “Even if we slash class sizes across the board, someone has to be 47th in the country,” said Dan Goldhaber, the director of the Center for Education Data and Research at the University of Washington Bothell. “The question we should be asking is, what is the difference between Washington and the state with the smallest class size? And when you look at the data, Washington’s not hugely different.” Washington’s average class size for elementary schools is 23 students — slightly higher than the national average of 21 students.

The question, then, is not just whether class-size reduction is an effective way to improve public education — it’s whether it can be implemented in a way that justifies the hefty price tag. A recent survey conducted by EducationNext suggests that Washington voters might not have passed I-1351 if they had been given more information about the relative costs.

In the survey, half of respondents were asked if they favored government spending on class-size reduction, increasing teacher salaries, or buying new books and technologies. A plurality (46 percent) supported class-size reduction. The other half of the sample was asked to make the same decision — but respondents were also told that “reducing average class sizes by three students would cost roughly the same amount as increasing teacher salaries by 13 percent or buying $10,000 in new books and technologies for each class every year.” Among this group, support for class-size reduction dropped by more than 10 percentage points; respondents were nearly evenly split, with approximately one-third supporting each of the three options.

Howes, the I-1351 campaign manager, said the initiative’s opponents are making excuses. “We can’t operate under the premise that we’re only willing to spend a certain amount of money on our children’s education.”

But, practically speaking, the state government has only so much money to spend. I-1351’s biggest flaw might be its failure to acknowledge this reality. “As much as we can, we should leave it to schools and to districts to figure out what’s the best use of funds,” Chingos said. “We should also give good technical assistance and guidelines about different interventions. But they shouldn’t be forced across the board to spend money in one particular way.”