Yesterday, the House of Representatives rejected an unconditional increase in the federal debt limit by a vote of 318 to 97, with all Republicans in opposition and Democrats splitting in favor 97-82.

The outcome of the vote, designed by John A. Boehner, the speaker of the House, to demonstrate that an increase in the debt limit could not pass unless austerity measures were enacted simultaneously, was not surprising. But is there anything we can learn from the vote as the parties enter into negotiations over what kinds of conditions might be mutually acceptable?

There is no analysis to be done, of course, on the Republican side, since they opposed the bill unanimously. For Democrats, meanwhile, the votes were related to the performance of Barack Obama in their districts, although in a somewhat funky way: 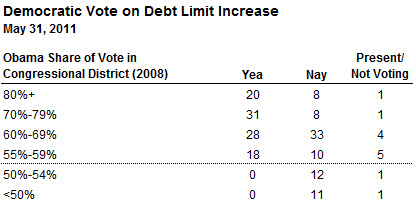 What we see here is a break between those districts which Democrats seem to perceive as safe, and those where their members might still be vulnerable. Clearly, those Democrats in districts that are close to the national median in terms of partisanship — or which are somewhat Republican-leaning — would rather not have a yea vote on their records.

But the good news — for those who would like to see the debt ceiling increased — is that there aren’t very many of these Democrats remaining, since the Republican wave crested so high in 2010. As of today (both numbers have increased by one with the swearing in of Kathy Hochul this afternoon) there are only 26 House Democrats remaining in districts where Mr. Obama carried less than 55 percent of the vote, and just 12 in districts where he did not carry at least 50 percent.

Put differently, the electoral vulnerability of Democrats should not be a major barrier to the passage of the increase because most of the vulnerable Democrats already lost. Perhaps some of those Democrats just on the other side of the 55 percent threshold are playing it too close for comfort — a handful of them are likely to have challenging races for one reason or another — but they already survived 2010, and 2012 is relatively unlikely to be a worse political environment for Democrats than last November.

Looking ahead to the arguments over the debt limit increase for the rest of the spring and summer, I think we can divide the House of Representatives into five broad groups.

Group 1. “Safe” Democrats (167 members). These are the Democrats in districts where Mr. Obama carried 55 percent or more of the vote in 2008, and they will probably provide the majority of the votes for a debt limit increase. True, a substantial number of them — 59 — voted against the bill yesterday. But they were operating under conflicting instructions (Nancy Pelosi voted against the bill, for example, along with most members of the Congressional Black Caucus) and those nay votes probably had more to do with tactical than electoral concerns. There is, in so far as I’m aware, no philosophical objection among these Democrats to raising the debt limit, although of course there could be objections if the compromise comes at what they perceive to be too high a price.

Group 2. Vulnerable Democrats (26 members). This is the smallest of the five groups — and not one that is liable to provide a lot of support for the debt limit increase, particularly judging by yesterday’s vote. Many of these Democrats survived by running, to some extent or another, against Barack Obama in 2010, so the fact that Mr. Obama supports the increase won’t likely be especially persuasive to them. At the same time, they’re liable to be running against the “extremist” Republican Congress in 2012, and are unlikely to want to take a bullet for something they see as a Republican responsibility. (Historically, votes to increase the debt ceiling have fallen quite strictly upon party lines.) Perhaps if an especially attractive compromise were reached, their votes could be in play. But it would likely need to be a compromise forged more from symbolic than substantive gestures, since many of the more substantive solutions to the federal debt (such as cuts to entitlement programs) are in and of themselves unpopular, making the vote a sort of double-whammy of unpopularity.

Group 3. Tea Party Republicans (60 members). There are 60 members of the Tea Party Caucus, and it’s safe to assume that most will be voting against almost any iteration of this bill — unless the austerity measures were so severe that they’d be unlikely to win approval from President Obama or from the Democratic Senate. Many of these members have also asserted that breaching the debt ceiling would not be problematic. These votes are effectively out of play.

Oftentimes, when a key coalition (like the Tea Party Caucus) is more obstinate in its position, that provides a party with a negotiating advantage, but that isn’t necessarily the case here. Without the Tea Party Caucus, Republicans do not constitute a majority. Nor would a coalition of non-Tea Party Republicans and the Vulnerable Democrats constitute a majority. So a vote to increase the debt limit is likely to require the approval of some number of safe, liberal Democrats, along with other groups.

Group 4. Vulnerable, Non-Tea Party Republicans (74 members). I’m defining a vulnerable Republican as any in a district which (a) voted for Barack Obama for 2008, or (b) gave less than 55 percent of its vote to John McCain in 2008 and was represented by a Democrat in the previous Congress. This excludes members of the Tea Party Caucus, for whom ideological concerns will presumably trump electoral ones, although just a handful of Tea Party members are in vulnerable districts.

The incentives for this group are perhaps the hardest to figure. On the one hand, it will not necessarily be to their benefit to show up the President, since he runs reasonably well in their districts. And if there is an anti-Republican wave — or even a “bipartisan” anti-incumbent wave — they will be among the first to capsize. On the other hand, almost all of them voted for Rep. Paul Ryan’s budget, which increasing evidence suggests is becoming quite unpopular, so they might not be in the mood for another unpopular vote on their records.

What these members would perhaps most like to see is some sort of a compromise that extricates them from their dilemma on Mr. Ryan budget. A bill that included significant reforms to entitlement programs like Medicare, for example, might not be popular unto itself — but it might nevertheless be a vote worth taking if it won bipartisan support, thereby blunting Democrats’ ability to attack on the issue.

A less substantive compromise might also be of some utility to them simply because it could make all incumbents more popular relative to the alternatives. Nevertheless, it would probably not stop the Democratic critiques of their Medicare votes.

Group 5. Safe, Non-Tea Party Republicans (106 members). About 160 Republicans have seats that we consider “safe” — but the number of votes in play is reduced because many of the safe Republicans are members of the Tea Party Caucus. Still, there’s a fairly large group of 106 Republicans remaining.

Some of these members, despite not officially being members of the Tea Party Caucus, vote just as conservatively as many of those Republicans who are and may vote against the bill on philosophical grounds. Some other number will be worried about primary challenges. Others, however — especially those in wealthy, suburban districts — are likely to take their cues more from the Chamber of Commerce than from the Tea Party, and their votes could be in play. If there is some compromise that Rep. Boehner endorses, some (although not all) will have to come along to provide the majority. If there is more of a free-for-all because of brinksmanship gone awry, they are also candidates to vote for the bill to present a disaster, although they will do so through gritted teeth.

So how does the math work? Group 1 — the Safe Democrats — are going to be relatively inclined to vote for most iterations of a compromise. That’s 167 votes of the 217 required, meaning that the House would need 50 more.

The bottom line: a vote to increase the debt limit would require the approval of all Safe Democrats, plus 50 of the 180 non-Tea Party Republicans. Those votes certainly won’t come easily, but nor does the math seem insurmountable.