At the betting market Intrade, Texas Gov. Rick Perry has overtaken Mitt Romney and is now considered the most likely person to win the Republican presidential contest. Mr. Perry is given a 35 percent chance of claiming the nomination as compared to Mr. Romney at 29 percent; Michelle Bachmann is a distant third place and assigned a 9 percent chance of winning.

Are the bettors being sensible or getting ahead of themselves? Although this is all fun and games as compared to the debt ceiling debate, a quick overview of the state of play is in order.

An average of the seven most recent polls of Republican voters (the six contained in the Real Clear Politics average plus the Economist / YouGov poll) finds Mr. Romney with the lead, with an average of 22 percent of the vote. After that, there’s essentially a four-way tie between Ms. Bachmann (13 percent), Sarah Palin (13 percent), Mr. Perry (12 percent) and Rudolph W. Giuliani (11 percent in the polls in which he is included). Herman Cain’s momentum appears to have faded, while Newt Gingrich and Tim Pawlenty are now often polling in the low rather than the high single digits. 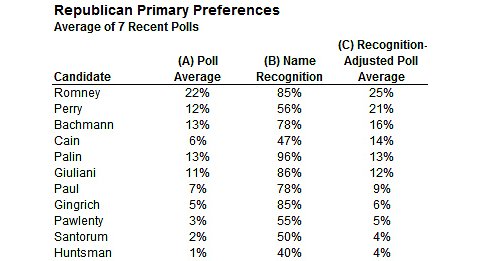 The results tighten up a bit, however, once we adjust for name recognition based on the latest Gallup numbers. (Dividing a candidate’s polling average by his name recognition can somewhat improve the predictive power of early-stage polls.) In particular, Mr. Perry is recognized by only slightly more than half of Republican voters. Of those who recognize his name, 21 percent list him as their first choice, just slightly behind Mr. Romney at 25 percent.

Ms. Bachmann also moves up slightly by this metric — but her name recognition has already grown to 78 percent, leaving her somewhat less upside than she once seemed to have.

A more important contingency for Ms. Bachmann is whether Sarah Palin runs. Four of the polls ran versions without either Ms. Palin or Mr. Giuliani, and in those surveys, Ms. Bachmann’s support averaged 18 percent rather than 13 percent.

However, this version of the numbers helps Mr. Romney as well — his support grows to 27 percent from 22 percent. Some of that is the runoff from moderate-leaning voters who might have preferred Mr. Giuliani, although Mr. Romney might also be picking up a few Sarah Palin supporters who haven’t thought much about the field and are defaulting to the most recognizable names.

Mr. Perry, interestingly, is not helped in this case — in fact, with Ms. Palin and Mr. Giulaini out of the race, his numbers decline a bit to 10 percent from 12 percent. The decline shouldn’t be taken too literally and is likely a sample size fluke at least in part. But it hints that Ms. Palin’s entry in the race would take more votes away from Ms. Bachmann than it would from Mr. Perry and could plausibly make his path easier despite the more crowded field.

Mr. Perry, however, has also yet to officially enter the race, and that’s the reason why it may be at least a little premature to anoint him as the frontrunner.

It’s not that Mr. Perry is literally likely to skip the presidential derby after making so much noise about it — most reporting suggests that he’ll officially become a candidate. But Mr. Perry will be getting off to something of a late start and will have to spend time fundraising or tweaking his campaign staff while Mr. Romney is in New Hampshire and Ms. Bachmann and Mr. Pawlenty are in Iowa. While not likely to be a fatal flaw, this could harm him in some intangible ways down the road.

More important is that Mr. Perry has yet to really endure the period of heightened scrutiny that almost all the other Republican faced when they announced their campaigns — and with decidedly mixed results. Mr. Romney survived his roll-out relatively well, although he got poor marks from conservative commentators for his health care speech. At the other end of the spectrum are Newt Gingrich, who was all but dead on arrival, and Jon Huntsman, whose campaign is moribund.

Apart from the general vetting that will take place — something that is relatively less likely to be a problem for Mr. Perry, the four-term governor of the nation’s second-largest state — there may be questions raised about his electability (is nominating a conservative Texas Republican the equivalent of a liberal Massachusetts Democrat?). Given his late start, comparisons may be made — perhaps unfairly — to Fred Thompson, whose 2008 campaign flailed.

And Mr. Perry will have to decide how to position himself between the establishment and the Tea Party. But that is a nice choice for a Republican candidate to have: Mr. Perry is probably the most capable of the candidates to maintain credibility with both groups. Given how conservative the Republican electorate has become, particularly in states like Iowa and South Carolina, Mr. Perry is probably closer than Mr. Romney to the median Republican primary voter.

So we have these two factors to weigh against one another: the fact that Mr. Romney’s campaign is at a far more advanced stage against the fact that Mr. Perry’s positioning is probably more in line with the mood of the G.O.P. electorate. You can make a credible case for either one; I tend to default toward Mr. Romney because he’s still a little bit ahead in the polls.

If Mr. Perry’s roll-out goes well, however, the Republican campaign could well develop into a heavyweight battle between the two rather than the Lord-of-the-Flies scenario that had seemed more likely before.

Ms. Bachmann or Mr. Pawlenty could also make themselves factors by winning Iowa, but they risk being relegated to the undercard if Mr. Perry gets off to a fast start. Look for them to throw a few banana peels his way to try to trip him up.