Today we continue our Road to 270 series with the Ocean State, Rhode Island.

DEEP OCEAN BLUE, Rhode Island has the smallest percentage of Republicans of any state in America. Its “Republicans” are often independents, and this is perhaps why Nate lists Rhode Island as the highest percentage of undecideds expected to break for John McCain. Unfortunately for McCain, it won’t be enough in this blue New England enclave. Rhode Island had the second highest Kerry margin in 2004, and the Republican Party has damaged its brand so significantly in Rhode Island that even Lincoln Chafee – a moderate Republican who endorsed Barack Obama – was ousted during the 2006 purge. The state legislature is 5-1 Democratic and Dems hold every statewide seat except governor. Both Congressmen and Senators are Democratic. 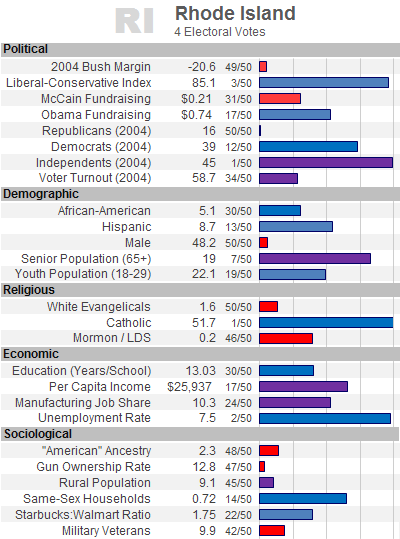 Rhode Island’s Democrats didn’t embrace Barack Obama in the primaries, handing him a big loss to Hillary Clinton on March 4. As mentioned at the outset, McCain will likely benefit from undecided voters – by percentage – as much as any other state. In addition, it’s a fairly old state and below average education state. That’s about it as far as the demographic data goes. This is a rough state for any Republican these days.

Rhode Island doesn’t even have a good sporting rivalry to mention. And please, Brownies, no email. You either, RISD. Our photographer came up with “Family Guy,” and of course both Dumb and Dumber and Something About Mary began their stories in Providence. But politically this year, there’s no drama except for the inside baseball-ish open question about whether Rhody will have the biggest undecided break for McCain. Oh, and Jack Reed, erstwhile VP speculation subject, is facing a Foxwoods casino pit boss named Robert Tingle in an ultrasafe Senate defense. So watch for “Tingle”-centric headline puns.