It’s not that I’m at all optimistic about the Democrats’ electoral fortunes in 2010. The general consensus that they’ll lose between 25 and 35 House seats strikes me as generous, for instance. I’d put the modal number at somewhere in the low 40s instead, although with a very wide range from as few as 20 Republican pickups to as many as 60.

But if Intrade is giving Republicans a 30 percent chance of an outright takeover of the Senate, I’d take the Democrats’ side of the bet.

Certainly, it’s no longer that hard to chart a path under which the Republicans would gain the 10 Senate seats they’d need for a takeover. They are overwhelming favorites in North Dakota, strong favorites in Delaware, Arkansas and Nevada, modest favorites in Indiana, Pennsylvania, and Colorado, and perhaps at least even-money in Illinois. Those are the eight obvious opportunities. Number nine would be California, where I’m a little bit skeptical of Carly Fiorina or Chuck DeVore’s ability to defeat Barbara Boxer, but where Tom Campbell might have the goods. The tenth seat is tougher: Republicans would need a recruiting coup in Wisconsin (unlikely; Tommy Thompson just went to consult for a hedge fund), New York (less unlikely, but George Pataki would need to raise a lot of money very fast), or Washington (less unlikely, but Dino Rossi has kept a very low profile) — or some kind of wild card, like Robert Byrd falling ill in West Virginia.

However, even if Republicans can recruit a good candidate in Washington or New York, and make smart decisions in California, and win the toss-ups in places like Illinois, and not screw up any of the seven or so races in which they appear to be favored, they also have to make sure that Democrats don’t take over any of their own seats. And this is the factor that the market may not be properly accounting for. The Democrats are competitive right now in Missouri, Ohio, New Hampshire, and Kentucky, could become that way in North Carolina and possibly Florida, and there’s an outside chance they could get a wild card of their own like Arizona. In most of these races, you either have a Republican (in an anti-establishment year) who is more a part of the establishment than his opponent, primary dynamics that could lead to the selection of an inexperienced or too-conservative candidate, or both. 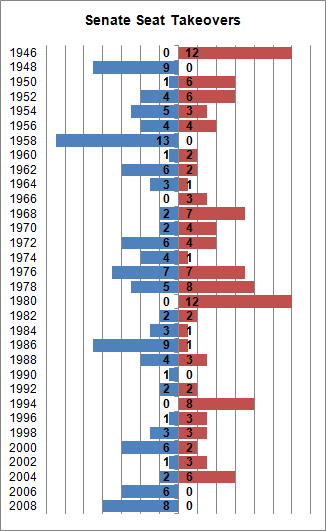 Clearly, 2010 will be to some greater or lesser extent an anti-Democratic year. The question is to what extent it might also be an anti-incumbent year, in which case Republicans could lose in Missouri or Ohio (where they’ll nominate card-carrying members of the GOP establishment) or perhaps a state like North Carolina, where they have an incumbent proper. Unlike in 1994, the GOP remains quite strongly unpopular. Also as compared with 1994, the Republicans are less cohesive, and that could result in their nominating a sub-optimal candidate in Kentucky, New Hampshire, Florida or Arizona.

If the national environment moves, say, another 5 points toward the Republicans, the shutout becomes fairly likely, and even good campaigns might not be enough to save the Democrats. For the time being, however, they could still easily win any of four or five races on the basis of a superior campaign — and while they might not be a favorite in any of those individual races, the collective odds of Democrats picking off at least one of them are pretty decent, and even one such pickup could end the Republicans’ dreams of a Senate takeover.

A final note: although Evan Bayh’s retirement in Indiana was clearly great news for Republicans, it didn’t necessarily increase their odds for a Senate takeover all that materially. The reason is that the Republicans’ path of least resistance toward a 10-seat pickup already involved their winning Indiana, which in spite of some erratic polling, certainly appeared to be a more promising pickup opportunity than blue states like California, Washington or Wisconsin where Republicans may not even have a credible candidate in place.