“You know the difference in Democrats and Republicans?” Bill Clinton said in a 2003 speech. “In every presidential election, Democrats want to fall in love. Republicans just fall in line.”

Clinton’s aphorism — which he attributed to a friend — has become a part of the conventional wisdom about how the parties behave. And there was more than a bit of truth to it when Clinton made his remarks. The previous three open Republican nominations — in 1988, 1996 and 2000 — had been won easily by establishment-backed candidates. Vice President George H.W. Bush won 41 of 50 states in the Republican primaries of 1988, Bob Dole won 44 in 1996, and George W. Bush won 43 in 2000. With the exception of Al Gore’s 50-state sweep in 2000, Democratic nominations during this period, including Clinton’s win in 1992, took longer to resolve, with several candidates competing for different factions of the Democratic Party before it settled on a nominee.

Long before these patterns became clear in primary and caucus voting, however, they were presaged by the endorsements that each candidate was racking up. Endorsements, especially from elected officials like U.S. senators and governors, have historically been the most reliable leading indicator of nomination success.

In 2000, for example, Bush had received 369 “endorsement points” (a simple scoring system we developed that assigns 10 points for endorsements from governors, 5 points for U.S. senators and 1 point for U.S. representatives) at this point in the nomination process, 200 days before the Iowa caucuses. That dwarfed the total for the second-place Republican, Dan Quayle, who had only 31 endorsement points. Dole was nearly as dominant in 1996, with 225 endorsement points to Phil Gramm’s 46. These candidates effectively wrapped up their races during the “invisible primary.” 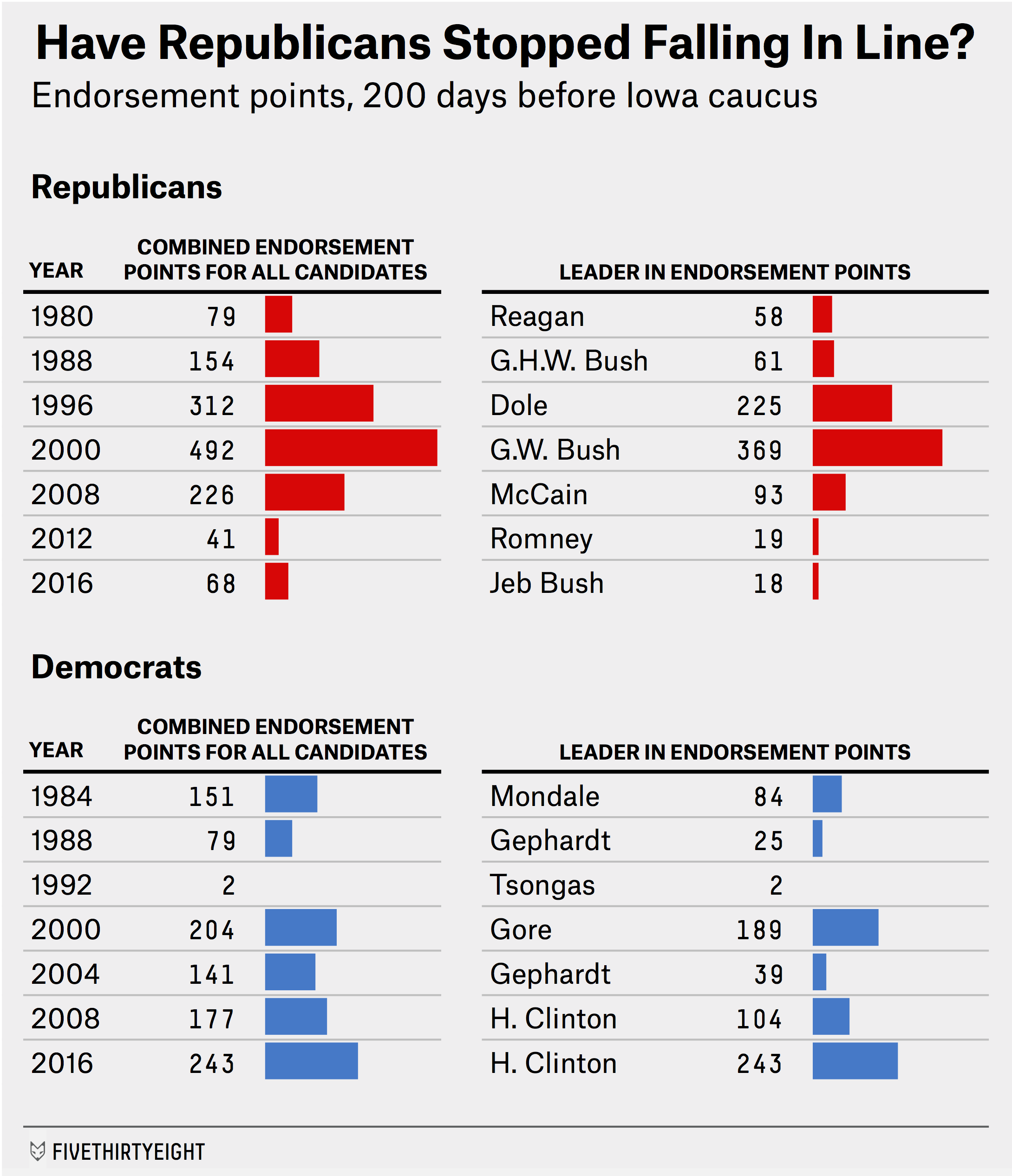 But this year, the historical trend has reversed itself. On the Democratic side, Hillary Clinton is the only candidate with any endorsements from current governors or U.S. senators and representatives. And she has a boatload of them: 88 representatives, 27 senators and two governors have endorsed Clinton, giving her 243 endorsement points, the highest figure ever at this stage of the race for a Democrat.

Republicans, however, haven’t fallen in line behind anyone. Jeb Bush is the nominal endorsement front-runner, but his 18 endorsement points are the lowest total for any leader at this point in the campaign since Tsongas in 1992. Only two Republican governors and three Republican senators have endorsed any candidate at all.

Endorsements also came slowly in the 2012 Republican nomination contest. As of June 17, 2011 — 200 days before the Iowa caucuses — Mitt Romney was the leader, but with only 19 endorsement points. That race got off to a later start than this one did, however, with candidates waiting until relatively late in the cycle to begin campaigning for president.

It may be that would-be Republican endorsers suffer from a paradox of choice. By most definitions, the 2016 Republican field is the largest ever since the modern primary system began in 1972. It’s probably also the deepest, given that many of the candidates are governors or senators from high-population states — yes, there are exceptions.

But the Republican Party is also divided between at least five identifiable constituencies: moderates (who still have influence in states like New Hampshire), establishment voters, Christian conservatives, libertarians, and populist (or so-called tea party) voters. These constituencies overlap, but each has several candidates to choose from: 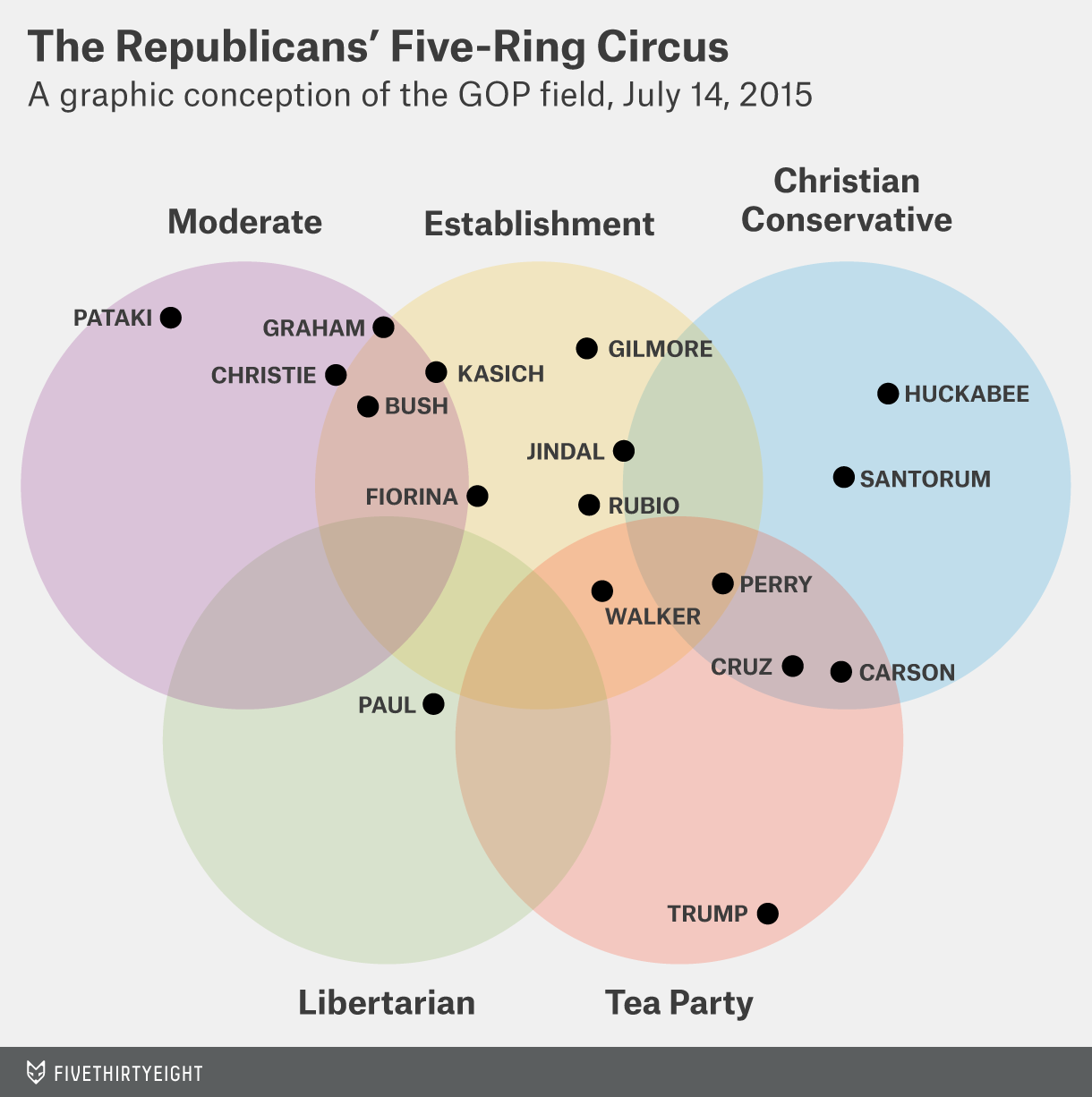 These constituencies are different from the factions that have traditionally made up the Democratic Party in that the GOP wings are less clearly divided along demographic and racial lines. Tea party voters are hard to distinguish from Christian conservatives on the basis of demographics alone, for example.

But they’ve proved to be real fault lines for Republicans. The establishment prevailed in the 2012 presidential race: Romney, after his slow start, developed a clear lead in endorsements by late 2011 before going on to win the nomination. But the establishment lost some battles when Republicans chose gubernatorial and Senate candidates in 2010 and 2012.

The smart money is still on the GOP eventually falling in line. Unlike Senate and gubernatorial primaries, which are one-off deals, the presidential nomination process proceeds for months, with states voting one at a time or in small groups. An anti-establishment candidate who wins a couple of early states, as Newt Gingrich did in 2012, may be quashed later on as the party rallies its resources against him. So it’s worth tracking endorsements, both for establishmentarian candidates like Jeb Bush and for others like Scott Walker who toe the line between running as “insiders” and “outsiders.”

But what if the GOP decides it needs to fall in love instead? It might make for the most fascinating nomination race of all time.