There was a time when you couldn’t turn on an NFL game without hearing the announcers opine on fullbacks: goliaths of the gridiron who mowed down defenders. Backs like Bronko Nagurski and Larry Csonka played the position with such grit and ruggedness that they are remembered years after their final, bruising 3-yard runs.

Fullbacks are easy to root for. Their ability to both absorb and mete out punishment sometimes seems superhuman. When Csonka, the Miami Dolphins fullback, was inducted into the NFL Hall of Fame in 1987, his longtime head coach Don Shula gave perhaps the greatest and most apt description of a fullback ever uttered: “He was blood and guts. Dirt all over him. He had 12 broken noses.”

But despite enduring in the sport’s collective memory, the style of football that produced these bruisers was very much of a particular time and place. It’s no exaggeration to say that the modern NFL has all but abandoned the position. According to Over The Cap, a website that tracks player contracts, just 14 of the NFL’s 32 teams currently have a fullback signed to a multi-year deal, and the average yearly salary for the position is just $1.16 million. Philadelphia head coach Doug Pederson has admitted that the Eagles don’t invest resources in the position, and the data seems to suggest that much of the league agrees with their approach.

On the field, too, the second back has become an endangered species: 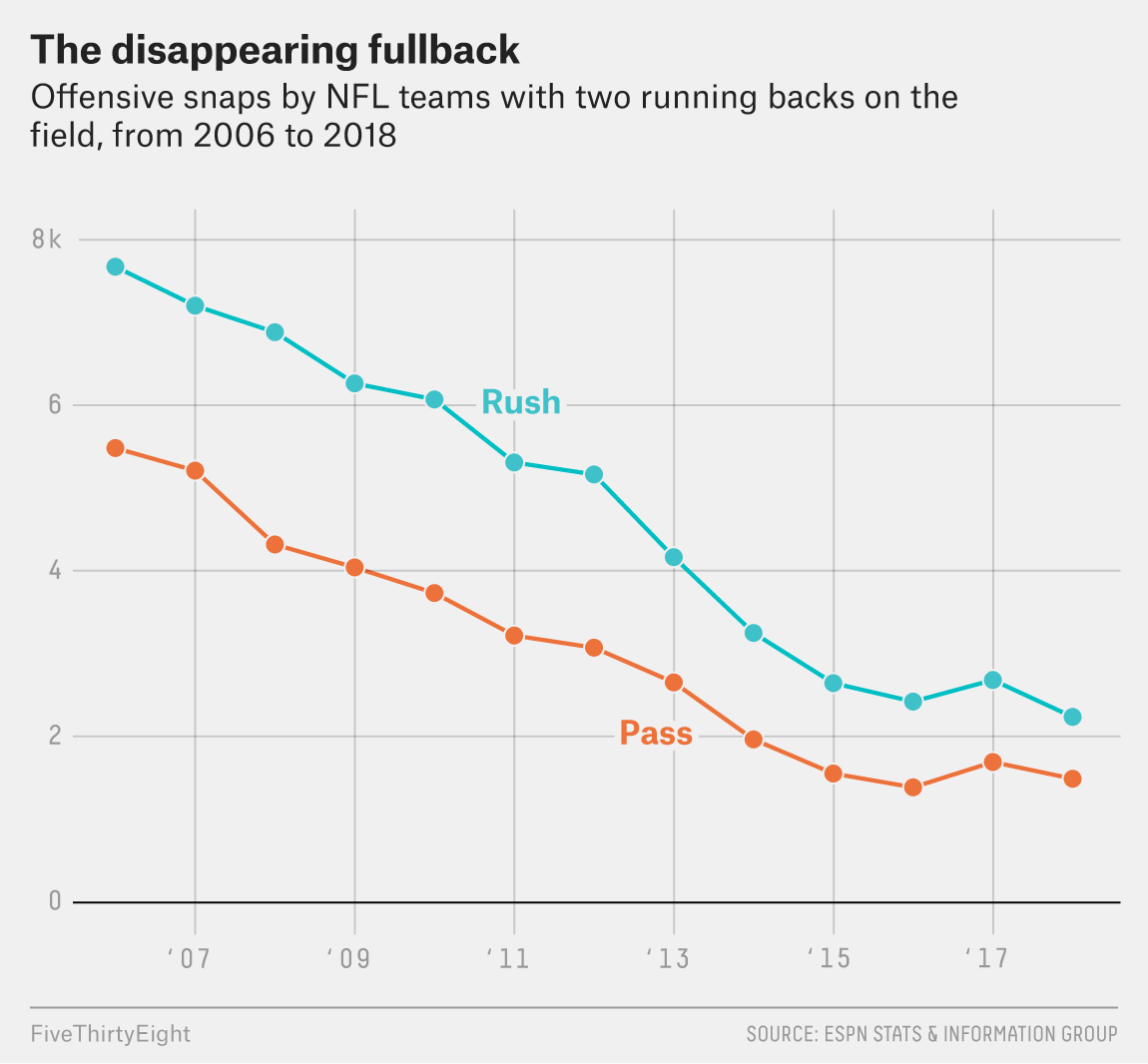 And fullbacks don’t have to look far for a villain to blame: pass-happy offenses. In a league increasingly focused on moving the ball through the air, it turned out that the fullback was the most obvious position to lose importance. Since every NFL offense has to include five linemen, who are ineligible receivers, and a quarterback, there are only so many ways you can mix and match the remaining five eligible players to meet your offensive goals. As NFL teams moved to formations with multiple receivers to support their passing attacks, it was inevitable that some position had to feel the pinch.

Yet, not everyone agrees that fullbacks are obsolete. In fact, some of the NFL’s best teams this season are featuring them. Through Week 6 of the 2019 season, there are six NFL teams who’ve run 100 or more offensive snaps with two backs on the field — and their combined record is an impressive 23-10-1. Even more interesting, the two teams that trot out fullbacks the most — the New England Patriots and San Francisco 49ers — are the only two undefeated teams left in the league.

Before we get carried away, the Patriots probably can’t credit two-back sets with too much of their success. Their expected points added per play for the package is actually negative, and they’ve gained just 4.5 yards per play with a fullback on the field.

Still, four of the six teams to feature two-back formations extensively are generating positive EPA on those plays, and none more than Kyle Shanahan’s 49ers. The Niners have run plays with a fullback on 139 of 348 offensive snaps through five games in 2019, and they’re gaining about a quarter of a point per play.

Yet what’s surprising about the 49ers and the rest of the teams utilizing a fullback is that their offensive gains aren’t coming from the obvious play type: the run. Having an added blocker in the backfield hasn’t really made running the ball more effective. Instead, the most successful gains from the package have come from the pass plays when a fullback is present. 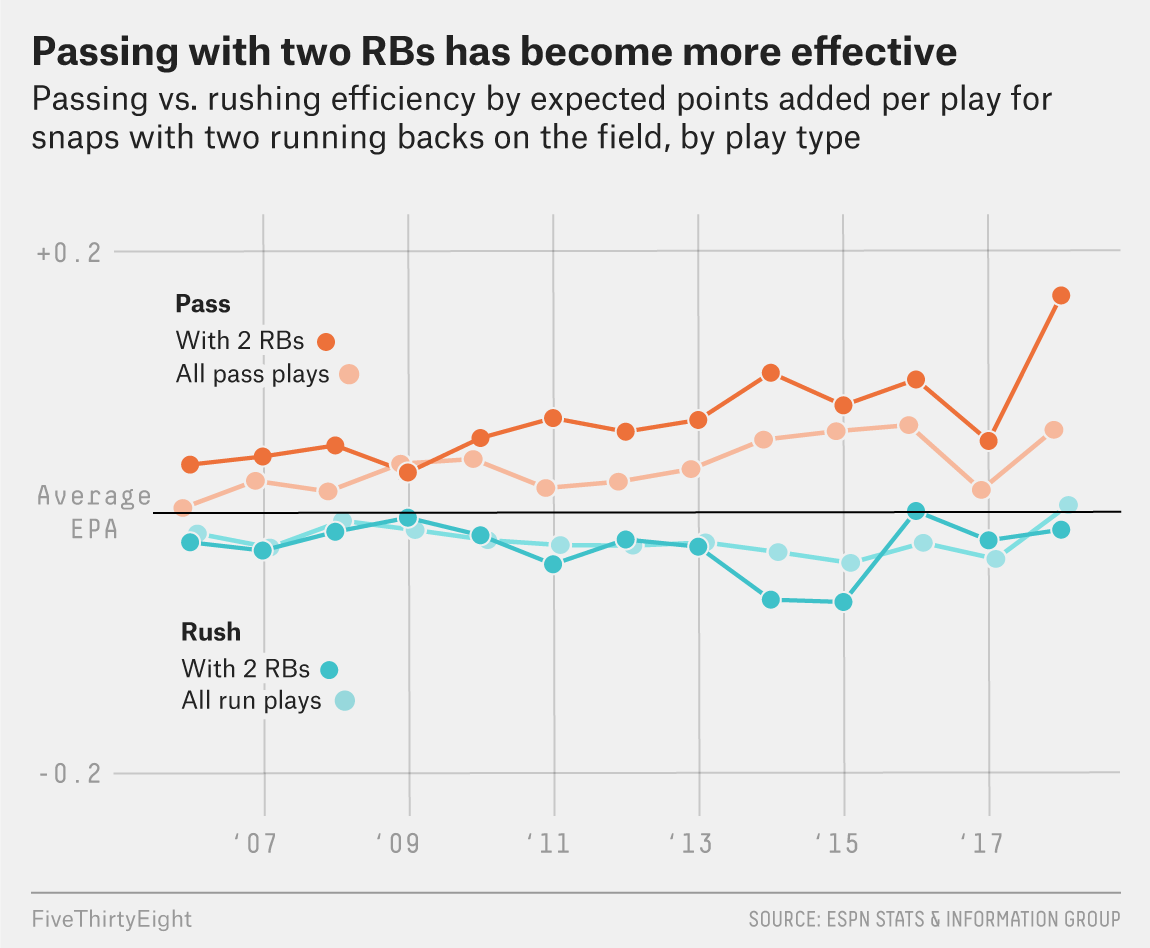 Even as the two-running-back personnel package has become more rare, passing from it has become increasingly effective. In all but three seasons2 from 2006-18 we can say with a high degree of confidence3 that passing with two backs was better than rushing with two backs, on average. All told, passing with a fullback on the field has been a winner.

The question is: Why?

The dominant narrative around two-running-back sets is that they benefit rushing, not passing. But there are at least a couple of reasonable explanations for passing’s surprising effectiveness, starting with former 49ers head coach Bill Walsh, who extolled the virtues of the fullback in the passing game nearly 40 years ago. He believed the fullback was the “critical part” of the 49ers passing attack because of the matchup difficulties the position presents. (A speedy, athletic fullback can be particularly hard for a middle linebacker to defend in space, but the defense has no choice but to send one out to counter the threat of the run he presents as an added blocker in the backfield.)

And while most teams still run more than they pass with a fullback in the game, there is some evidence that NFL coaches have taken Walsh’s ideas to heart. The gap between the frequency of rush and pass plays called in two-back groupings has narrowed slightly since 2006, and creative play-callers like Shanahan are lining up their top receiving weapons at the fullback with success. The play below from Week 6 shows 49ers tight end George Kittle lined up as the fullback in the offset I-formation. It ends with the Niners gaining 45 yards and setting up a first and goal.

Aside from the matchup difficulties a talented fullback presents, deception is another likely explanation for passing success out of two-back personnel. When teams bring out a fullback, the defense is strongly incentivized to stack the box and defend the run, leaving parts of the field vulnerable to attack with the pass. On the pass to Kittle, the play design called for him to sell to the middle linebacker that he was going to lead block. Kittle does a good job fooling No. 51 Troy Reeder, and then he breaks across the field — away from the linebacker — and is wide open for a big gain.

Still, if deception is so effective, why don’t more teams do it? One explanation is the negative perception it appears to have around the league. Recently, former Ravens linebacker Ray Lewis was asked for his thoughts on the decline of the fullback. Lewis lamented that defenses resort to trickery to win, and appeared to long for simpler times when the physicality of the game was paramount.

“The game is about men battling men … that’s what the game was. The game was not tricks. Now we tricky. Now everybody’s smart,” Lewis said.

Teams might prefer to win by lining up and punching the other guy in the mouth, but the data supports Walsh’s view of the world. Given the precedent set by Walsh in San Francisco, there’s a certain symmetry to Shanahan and the Niners leading a mini fullback-resurgence, but it’s not just vapid nostalgia. When you combine a consistent matchup advantage with deception, you probably have a recipe for success in the NFL. As a potent passing weapon, perhaps the fullback is back to stay.