Wisconsin residents on Tuesday voted on whether to recall six Republican state senators, whose backing of Gov. Scott Walker in the dispute over collective bargaining rights this year made them targets for Democratic-aligned groups. Two Democratic state senators face a recall vote next Tuesday. (A third Democratic senator, Dave Hansen, easily survived a recall election on July 19.) Democrats will need to win three of the six Republican seats — without losing either of their own next week — to take control of the state senate.

All of these seats can be classified as being in swing districts, having voted for Mr. Walker, a Republican, in 2010 but for President Obama in 2008. Most are a couple of points more Republican than Wisconsin as a whole. The closest thing to an exception is the 32nd Senate District in the western corner of the state, served by the Republican incumbent Dan Kapanke. It is more liberal than the others, having given Mr. Walker only a narrow plurality in 2010 and Mr. Obama 61 percent of its vote in 2008. 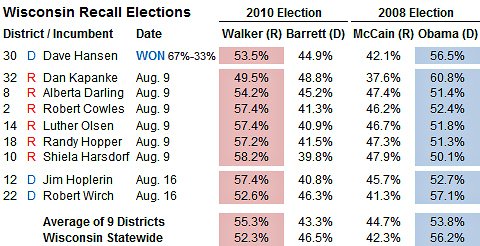 There have been several polls of the recall efforts, but here is where I would urge some caution. Most of the polls have either been conducted by partisan groups, have unorthodox methodologies, or both. The polls do seem to find that Mr. Kapanke, being in the most liberal of the districts, is a favorite to lose. Otherwise, the margin of error on these polls is going to be very high. The further you go down the ballot, the more the margin of error on polls increases, and a recall election is an inherently unusual circumstance. Virtually anything — from a Democratic sweep to their picking up none or just one seat — is a plausible outcome.

I would also urge some caution in interpreting the results. True, there are also other swing states, like Florida, Ohio and Michigan, in which there are unpopular Republican governors. But to the extent this is a problem for Republicans, the results in Wisconsin on Tuesday night will probably only provide us with a very fuzzy clue about that, in the same way that special elections to the House provide only the vaguest hints about elections fought under other circumstances. And unlike some special House elections, this one is being contested on explicitly local issues.

The one thing it would be safe to say is that, if Democrats have a strong night, Mr. Walker will be in some jeopardy, as he could face his own recall election next year.

If you are going to read into the results, it is probably best to compare them to Mr. Walker’s performance in 2010 rather than the margins that the state senators themselves achieved that year. Ordinarily, nobody pays much attention to state senate elections. If some Republican incumbent was re-elected with 70 percent of the vote in 2010, but survives the recall with 55 percent of the vote, it would be dubious to cite that as a sign of progress for Democrats since the elections were contested under substantially different circumstances.

On the other hand, Mr. Walker carried the six districts on Tuesday’s recall ballot by an average of 13 percentage points in 2010 — better than his statewide margin of 6 percentage points. If Democrats were to split the vote across these districts about evenly, that would be a reasonably troubling sign for Mr. Walker, however many of the seats Democrats actually win.