I’m working on an article about the New York Mets — but that subject is perhaps too depressing for a beautiful Memorial Day weekend.

The article, in any event, will focus on the Mets’ attendance and whether there are any signals that the club’s off-the-field problems have begun to hurt its take at the box office. (Spoiler: the answer is probably “yes.”) Part of this involves looking at each team’s attendance as a function of a number of factors, including their performance on the field, the size of their market, and the quality of their ballpark.

How do we evaluate each team’s ballpark? Every now and then, some writer is lucky enough to earn a book advance or a freelance contract for visiting every major league stadium and rating them (see 1988’s Dodger Dogs and Fenway Franks or ESPN’s Stadium Tour for some well-executed examples). But most of these efforts are out of date — and of course, they reflect just one fan’s opinion.

There are also sometimes fan surveys, but they tend to be unnecessarily complicated, asking fans to rate the ballparks along a number of distinct dimensions rather than evaluating their experience holistically.

So here’s a much simpler approach. I looked up the average rating — from one to five stars — for each of the 30 major league stadiums at the popular review site Yelp.com. It’s no more complicated than that. All of the ballparks have at least dozens if not hundreds of ratings from individual fans. 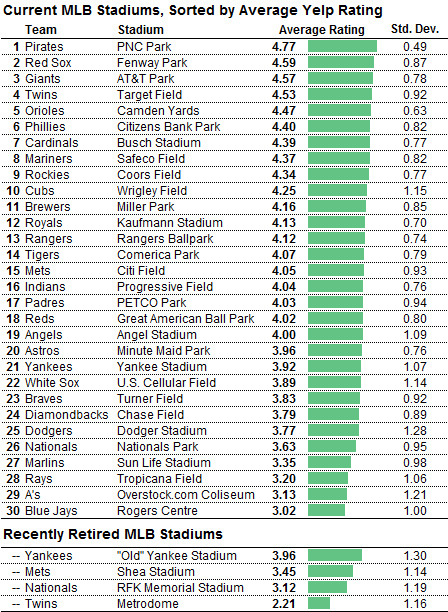 Four ballparks, meanwhile, stand out for being at least a standard deviation below the curve. They are Miami’s Sun Life Stadium (3.35 stars), the Tampa Bay Rays’ Tropicana Field (3.20) in St. Petersburg, Oakland’s unfortunately-named Overstock.com Coliseum (3.13) and Toronto’s Rogers Centre (3.02) — which was completed in 1989 as the state-of-the-art SkyDome but which now seems dreary and passé.

At least two of these four stadiums are soon to be replaced. But not every new ballpark is equally well regarded. Washington’s Nationals Park, for example, receives tepid reviews (3.63 stars), although perhaps that is because fans find it hard to look past the ugly play of the team on the field.

One potential conclusion is that it’s not worth building a retractable roof (which often requires significant additional taxpayer expense.) The five stadiums which have one receive an average rating of 3.86, versus an average of 4.10 for those that remain open to the elements.

The two ballparks in New York receive fairly average ratings, with the Mets’ Citi Field (4.05 stars) slightly preferred to the new Yankee Stadium (3.92). For the Mets, this represents a major upgrade over Shea Stadium (3.45 stars). But the old Yankee Stadium (3.96 stars) received almost the same grade as the new one.

In the chart you see above, I’ve also listed the standard deviation for each ballpark — the higher this number is, the more disagreement there is among fans as to the overall experience. While Dodger Stadium, for example, receives plenty of high grades, other fans abhor it for the traffic problems it creates (not that this is so easy to avoid in Los Angeles) or for its increasingly rowdy fans (in what reflects a sea change from the park’s staid atmosphere during previous generations).

Chicago’s Wrigley Field ranks 10th overall, but elicits its share of skeptical reactions. Some of its issues — like narrow seats and an inadequate number of bathrooms — are going to be hard to resolve without gutting the place. But others, like improving the park’s below-average food and beer options, would seem easier to solve; perhaps the Cubs should consider trading Alfonso Soriano for chef Rick Bayless.