By definition, race-based admissions are only an issue at selective schools, which account for about a quarter of undergraduate enrollment. But the racial gap in higher education goes far beyond those elite schools. Indeed, blacks and Latinos lose ground at every step of the educational process. They are less likely to finish high school, less likely to attend college and less likely to graduate when they get there.

All of that adds up to a big gap in the number that ultimately matters most: “educational attainment,” or the amount of school a person completes. In 2013, about 40 percent of whites between the ages of 25 and 29 had a bachelor’s degree or more, compared to about 20 percent of blacks, 15 percent of Hispanics and 58 percent of Asians, according to data from the Current Population Survey.1 The gap hasn’t narrowed significantly in recent years. 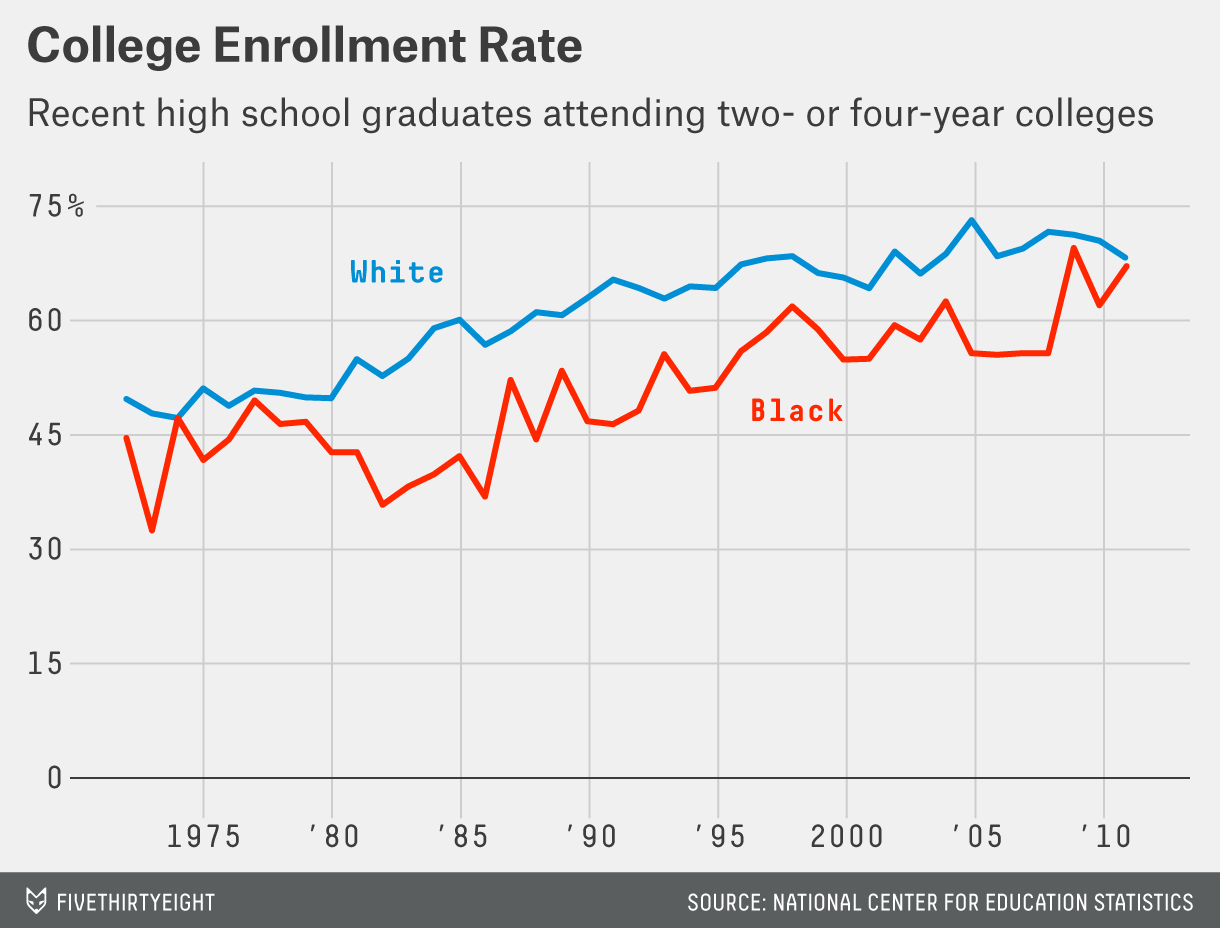 Many critics of affirmative action argue that what really matters isn’t race but income, and that colleges should focus on promoting socioeconomic, rather than racial, diversity. Indeed, when it comes to college enrollment, the income gap is significantly larger than the racial gap. About 82 percent of high school graduates from high-income families enroll in college, compared to 52 percent of graduates from low-income families. By comparison, just under 70 percent of white high school graduates go to college, versus 65 percent of blacks. Moreover, the racial gap has generally narrowed over time; the income gap has not.

Graduation rates are a different story. There is an income gap in graduation rates, but the racial gap is bigger. According to Education Department data, 47 percent of students who receive Pell grants, a federal student aid program for low-income students, graduate within six years, a higher graduation rate than that of both blacks and Latinos.2 This is far from a comprehensive analysis. A more complete study would account for high school quality, parents’ marital status and other factors that could contribute to students’ success. But the fact that racial minorities have lower graduation rates than low-income students suggests that, at a minimum, income can’t fully explain the racial gap in graduation.

But those figures leave out a lot of people: students attending part-time, students at two-year colleges and transfer students. That’s an important distinction. In a 2011 report titled, “Time Is the Enemy,” Complete College America showed that the longer it takes for students to move through college, the less likely they are to earn a degree. Anything that slows students down, whether it’s enrolling part-time, taking remedial courses or starting off in community college, makes students less likely to complete a bachelor’s degree.4 Minority students are overrepresented in nearly all those categories. 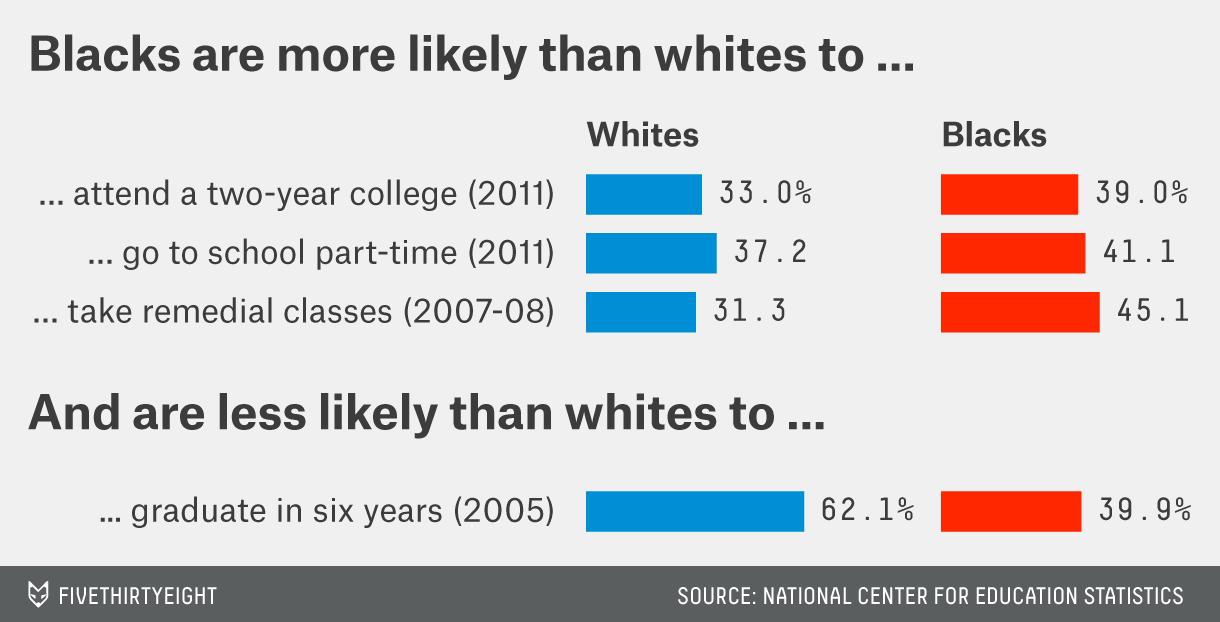 Students at these less prestigious institutions are much less likely to graduate. According to data from Complete College America, a coalition of 33 states and Washington, D.C., dedicated to improving graduation rates, full-time students at elite research universities were more than 50 percent more likely to graduate within six years as those at less selective institutions.6 Community college graduation rates are even lower: Less than a third of full-time community college students complete an associate degree within three years, according to Department of Education data.7

Moreover, those graduation rates only cover full-time students, which means they ignore more than one-fifth of undergraduates. According to Complete College America, less than 25 percent of part-time students complete a bachelor’s degree within eight years of enrollment, compared to about 60 percent of full-time students. And minority students are more likely to attend school part-time.

Even a college degree doesn’t fully close the racial gap. College-educated blacks are more likely to be unemployed than college-educated whites, and they earn less money on average. But getting a degree makes a big difference. For blacks aged 25 to 29 with a college degree, the unemployment rate in 2013 was 7.6 percent. For those without one, it was 17.8 percent.