States with higher numbers of adults who identify themselves as “pro-life” have lower rates of abortion among both teenage and adult women.

The chart below compares the percentage of pregnancies in each state that ended in abortion in 2005 to a SurveyUSA poll conducted in that same year that asked residents of all 50 states to identify themselves as pro-choice or pro-life. A couple of caveats about the abortion data: although it comes from the CDC (.pdf), it relies on voluntary reporting from each state health agency. Some states, like Florida and Louisiana, do not report their abortion statistics, and in other cases — Kentucky’s figures are suspiciously low when compared to Tennessee’s, for instance — it may be subject to various sorts of imperfections, as the reporting of abortion statistics can have some political implications. Also, there is some ambiguity about the number of abortions in a particular state versus the number by residents of that state; for instance, a lot of women in Idaho travel to Washington to get abortions, which has more liberal abortion laws (there appear to be similar flows from Mississippi into Alabama, South Dakota into North Dakota, and Missouri into Kansas, among others). We report the latter total, with a correction for those women whose state of residence was not identified. Nevertheless, those caveats aside, the relationship is pretty strong: 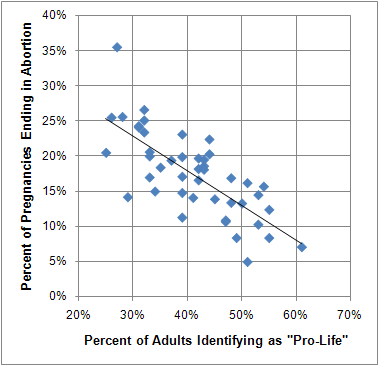 The modest outlier you see in the top left-hand corner is New York, which was one of four states (the others are Alaska, Hawaii and Washington) in which abortion was completely legal prior to the Roe v Wade decision and has particularly liberal abortion laws. It seems, however, that people do practice what they preach. For each increase of about 10 percent in the number of residents who identify themselves as pro-life, the percentage of pregnancies ending in abortion is reduced by about 5 percent.

The pattern is slightly more profound when we look at teenage (girls aged 15-19) pregnancies, among whom a higher fraction of pregnancies (at least a quarter) end in abortion and where there is larger state-to-state variance: more than half of teenage pregnancies in New York end in abortion, for instance, versus less than 15 percent in some states like West Virginia, Arizona and South Dakota (and purportedly only 5 percent in Kentucky, but as we mentioned before we find that figure dubious). For teenagers, the CDC reports data based only on the number of abortions in a particular state and not by state of residence; we apply a correction for this to attempt to identify the latter figure. 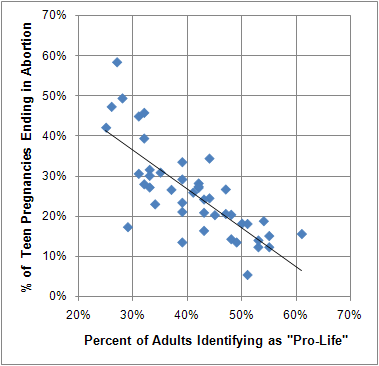 The correlation there is quite strong — about .77.

It might be objected that those states that have more pro-life residents may have more restrictive abortion laws; I ran a regression analysis to test for the impact of things like parental notification requirements and waiting periods and generally did not find any significant relationships, although it does appear that the four states in which abortion was legal before Roe maintain somewhat higher abortion rates today. I also tested for the impact of a few types of demographic variables and some were statistically significant in some formulations of the model (higher rates of teenage pregnancy, for instance, were correlated with higher abortion rates after controlling for other variables). None of these, however, invalidated the pro-life variable, which was highly statistically significant in all versions of the analysis.

One complication, however, is that of access. According to the Guttmacher Institute, approximately one-third of American women live in a county where there is no abortion provider. There is a very strong (inverse) relationship, additionally, between having access to an abortion provider in one’s county, and the pro-life leanings of that state. 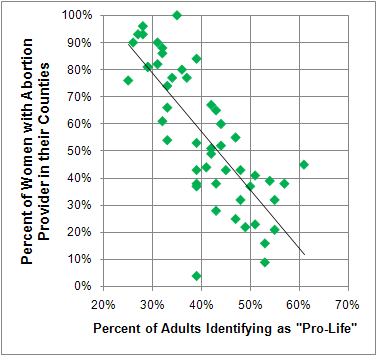 Do pro-life states have fewer abortion providers because there is less demand for abortions in those states? Or, alternatively, is there social stigma attached in these states to running an abortion clinic, meaning that less of the demand is met?

Undoubtedly the answer is some of both. The regression analysis hints that access is not a strong causal factor — from what it can gather, the pro-life tendencies of a state drives both the lower number of abortions among its residence and the relative absence of abortion clinics, rather than access directly impacting the abortion figures. On the other hand, because all of these variables are so strongly correlated, it is hard for the model to disentangle them.

The Guttmacher institute data, however, suggests that abortion providers in pro-life states carry a larger caseload. Abortion clinics in the 15 most pro-life states performed an average of 949 abortions in 2005; those in pro-choice states performed an average of 576. (In this case, we are reverting back to using data based on the state in which the abortion was actually performed — not the woman’s state of residence). This may imply that there are either too few providers in pro-life states to meet the demand for abortion (or too many in pro-choice states) — although clearly many women who want an abortion are willing to travel for one.

What would be interesting for both pro-lifers and pro-choicers to know, however, is the relationship between access and abortion rates. If it’s a three-hour drive to the nearest clinic, how many women will ultimately wind up forsaking an abortion (and how many will have an illegal abortion instead)? I’m not going to try and sum this up with a nice, sugary conclusion. This is a complicated issue and, appropriately enough, it has complicated answers, even when it comes to its statistics.