The Occupy Wall Street protests, by design, began with little in the way of concrete goals or strategy.

But the protests in Manhattan, now in their third week, and in other parts of the country, have found two ways to draw attention to their cause. First, keep at it. Second, wait for confrontations with the police.

In the early days of the protests, which began on Sept. 17, coverage was all but nonexistent in the mainstream news media. It has increased significantly in recent days, however, and is now beginning to rival that given to Tea Party protests in April and May 2009.

We can estimate the amount of media coverage given to the protests through the database NewsLibrary.com, a compendium of about 4,000 news outlets in the United States — mostly “traditional” sources like newspapers and television stations.

I searched the database, looking for instances in which the term “Wall Street” was used alongside one of these terms: “occupy,” “protest” or “demonstration.”

I then adjusted the results in two ways: first, for the overall volume of news articles in the NewsLibrary.com database for a particular day (there are significantly more news articles published during the week than on the weekend, for instance). And second, for the potential for “false positive” hits. The sentence “Wall Street rallied today in a demonstration of resolve by investors” would refer to stock price movements rather than the protests, for instance.

(False positives were estimated from the number of hits the search would have returned over the period from 2006 to 2010 and were subtracted from the total, with the constraint that the overall number of hits could not be lower than the number of articles that used the exact three-word phrase “Occupy Wall Street” on that day. All figures herein are given on an adjusted basis unless otherwise noted.)

By this definition, there were only 10 traditional news accounts of the protests on Sept. 17. And coverage remained slow thereafter, averaging just 16 hits per day on an adjusted basis through the first eight days of the protests.

Coverage increased after an incident on Sept. 24, however, when three protesters were hit with pepper spray by the police despite, apparently, posing no imminent threat. The next day, the volume of news coverage increased to 96 hits, about six times its previous rate. 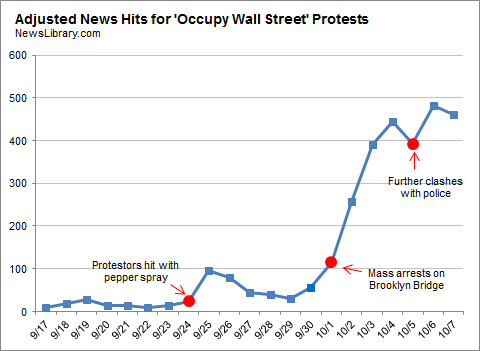 Coverage declined slightly the day after that, but remained above its previous levels. It shot up again after mass arrests on the Brooklyn Bridge on Oct. 1. That day set a high for coverage, with 115 news hits, and the number increased again to 258 hits on Oct. 2 and 391 on Oct. 3.

Still, the volume of news coverage has tended to grow in a punctuated way rather than a smooth and linear fashion, having increased after each confrontation with the police.

Equally noteworthy, though, is that coverage has remained at something of a new equilibrium after each of the incidents, rather than falling back to its previous levels, something which may speak to the persistence of the protesters.

We can also compare the coverage given to the Occupy Wall Street protests with that given to the Tea Party demonstrations in early 2009.

The seminal event for the Tea Party was a series of rallies on April 15, 2009, that attracted at least 300,000 protesters in about 350 locations around the country.

Identifying news coverage of the Tea Party protests by searching for the term “tea party” in conjunction with “demonstration,” “protest” or “rally,” and adjusting the figures in a manner similar to that for the Wall Street protests, finds that they produced 769 media hits on April 15, 2009, and 1,016 the next day — more than in any single day for the Wall Street protests.

Unlike the Wall Street protests, however, the Tea Party rallies were a one-day event, and coverage declined thereafter, to an average of 215 media hits per day over the three-week period from April 15 to May 5, 2009.

By contrast, the Occupy Wall Street protests have been covered in an average of 144 articles per day in the three weeks of their existence. In the aggregate, this is about two-thirds as much coverage as the Tea Party protests received. 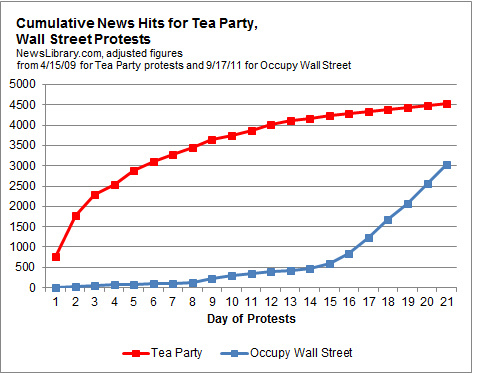 Coverage of the Wall Street protests continues to increase, however, and could surpass that given to the Tea Party rallies in April and May 2009 if it remains at its current levels for several more days.

It is also worth noting that there were some nascent Tea Party protests before April 15, 2009. A series of protests on Feb. 27, 2009, for instance, accounted for 17 news articles that day and 49 the following day.

Even as compared with the more widespread protests in April 2009, however, the Wall Street protests have begun to catch up in terms of news media attention.