Let’s say there’s a public transit line near your house. Your commute from home to work on this line will average about 40 minutes, door to door. Are you going to take it, or not?

Obviously, I haven’t given you enough information to answer the question. You’ll almost certainly take public transit if driving would take 60 minutes instead. And you’ll almost certainly avoid it if driving would take 15 minutes. If it is relatively close between the two, it would come down to factors like cost, comfort and reliability. The point is simply that you have a choice, and questions about the utility of a public transit system make sense only in the context of that choice.

But a new report on public transportation from the venerable Brookings Institution, which is getting a lot of play in local newspapers around the country, fails to make this very basic distinction.

The report caught my eye because it came to some surprising conclusions. It ranked the top 100 American metropolitan areas on the basis of “access to [public] transit and employment.” I know that I’ve become something of a New York partisan since moving here two years ago, but I was pretty sure that New York was going to rank somewhere near the top of the list, probably along with Washington, D.C., and Chicago.

This seems really strange. I have my issues with the M.T.A. — I hate the cumbersome routes to the airports, and the unpredictable closings late at night after I’ve pulled a long evening at The Times. But it’s a pretty good system — roughly as good in my experience as London (where the Underground closes early and suffers from frequent shutdowns) or Paris (where the Métro, like many things in Paris, is beautiful but slow: trains average about 12 miles per hour). I could fathom New York’s being behind Washington — but it has worse public transit than Tucson and Modesto?

But don’t take my word for it: look at how commuters behave. Just one of the metro areas that ranks in the top 10 in the share of commutes made by public transportation, Honolulu, also made the Brookings top 10.

Conversely, just 3 percent of the commutes in the Brookings top 10 were made by public transit. Several cities on the list, like Modesto — where just 0.8 percent of commuters use public transit — were well below the urban average. 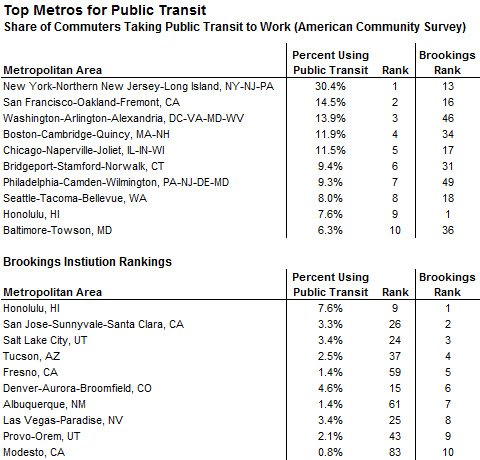 Is it that 99.2 percent of the people who live in Modesto (Modestonians? Modestites?) just don’t realize they have one of the world’s best public transit systems just waiting at their doorsteps? Or did four folks sitting in a conference room at the Brookings Institution design a bad study?

O.K., that’s a loaded question. The Brookings study collected some pretty interesting data, and it picked a worthwhile subject. It just asked the wrong question, focusing on access to public transit rather than considering a commuter’s choices.

The first question is pretty straightforward, provided that you know where the routes go. The second one isn’t, and requires you to know — or to make some assumptions — about where people live relative to where they work. Brookings did some modeling on this, using actual timetables and routing information, and although they made a few choices that I might have made differently, it’s valuable data to collect.

The problem is that a study like this is pretty useless if you don’t evaluate a commuter’s alternatives. Consider Poughkeepsie, N.Y., which ranked dead last in the Brookings study. Poughkeepsie is quite a ways away from New York City, but nevertheless some people choose to commute to the city from there. The trip to Grand Central Terminal on Metro-North Railroad is two hours, which is quite a tedious journey. But the same trip by car is one hour and 39 minutes without traffic — and you’re certainly going to encounter some traffic when driving into New York City at rush hour.

So you have to pick your poison, but Metro-North is probably the better alternative for at least some Poughkeepsie residents, and its presence improves the welfare of the city. In fact, Poughkeepsie ranks 14th out of 100 metro areas in the share of commutes made by public transit.

Alternatively, consider Modesto. Let’s say that you live on the corner of Rosemore Avenue and Crocker Lane in Modesto, and work at the E&J Gallo Winery, which is the city’s largest employer. The commute, by bus, is about 30 minutes. A lot of New Yorkers would kill for a half-hour commute! But the same trip by car is just 8 minutes. I’m not saying that the bus system in Modesto should be demolished — it’s useful to have some alternative for people who can’t or won’t drive — but the vast majority of people in Modesto are indifferent (at best) to the presence of the bus system and it probably doesn’t merit any more taxpayer dollars than it gets presently.

Ironically, the cities that ranked highly in the Brookings ratings may have done so precisely because they are good cities for drivers. Of the people who took public transit to work in their top 10 cities, 91 percent did so by bus, according to data from the American Community Survey. The thing about buses is that, unless they have special right-of-way (as they do in some cities like Pittsburgh and Seattle), they by definition can’t be faster than passenger cars since they follow the same roads, but do so with more stops and with other inconveniences (like walking and waiting time) to the commuter.

Cities that have roads that are relatively free of congestion — and the midsize cities of the western United States that top the Brookings list qualify since they were designed with cars in mind — will provide for fast commutes by bus in an absolute sense. But the routes will nevertheless be slower than they would be by private automobile, so not very many people will use them. A study that evaluated public transit through the paradigm of access to public transit, like the Brookings study did, would not catch the distinction, but one that instead focused on the choices available to commuters would. You could spend billions of dollars expanding the light rail system in Buffalo and build something completely state-of-the-art — but because Buffalo already offers extremely short commute times (because of its population loss), it would be a waste of resources and nobody would use it.

So why draw this relatively obscure study to your attention? There are three reasons.

First, it gets at an important public policy question. I’m a big “fan” of mass transit — but I also assume that the taxpayer’s tolerance for financing new projects is going to be limited, and the money should be concentrated in areas where driving is a bad alternative and there would be significant improvement in commuter welfare by building new mass transit lines. This would include cities like Atlanta, Dallas, Houston and Los Angeles, which have high average commute times but very little public transit use.

Second, there is significant untapped potential in the Brookings data. They’ve gone to great lengths to estimate commute times by public transit, which is not an easy thing to do. If they also modeled how long the same trips would take by car, the data would be considerably more useful. Suppose, for example, that they identified a few cities in which public transit were already quite competitive with driving, but relatively few people used the system. That would signal to those cities that they needed to engage in a marketing campaign, which would be extremely cheap relative to establishing new public transit lines. Alternatively, there might be some cities where the routes are right, but service is too infrequent — if the light rail system stopped once every 5 minutes, instead of once every 20 minutes, it would become a good alternative for a lot more commuters. This too would be a relatively cheap fix — it’s much, much more cost-effective to add additional service on an existing public transit line than to build a new one from scratch.

But the third reason is more general: I want to point out that just because a study uses objective criteria, that doesn’t make it sensible. In fact, studies that try to rank or rate things seem especially susceptible to slapdash, unthoughtful methodology (here is another example: a study which concludes that Gainesville, Fla., is a more gay-friendly city than San Francisco). If you come up with a result that defies common sense — like Modesto’s having better public transit than New York — then once in a blue moon, you may be on to something: conventional wisdom is fallible. But much, much more often, it’s a sign that you’ve done something wrong, and it’s time to reconsider your assumptions before publishing.