Although Barack Obama defied our prediction of starting his term with a higher initial approval rating than John F. Kennedy, his 68 percent approval score (versus 12 percent disapproval) is nevertheless noteworthy in comparison with his recent predecessors: 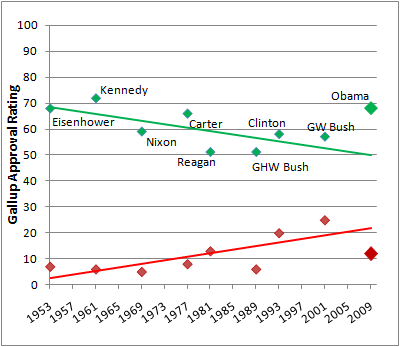 This chart tracks the initial Gallup approval and disapproval ratings following the inaugurations of newly-elected presidents since Eisenhower; Truman, Johnson, and Ford, who took over following the death or resignation of their predecessors, are excluded.

The green and red lines represent the time trends established prior to this year (that is, they don’t include the Obama data point). While newly-elected presidents tend always to begin their terms with fairly high approval metrics, this has been decreasingly true in recent years, perhaps a reflection of increased partisanship. Obama’s initial approval rating, indeed, is the highest of any president since Kennedy. His initial disapproval rating, meanwhile, is about half that of his two most recent predecessors, although higher than that of Eisenhower, Kennedy, Nixon, Carter, and G.H.W. Bush, all of whom began with disapproval in the single digits.

Whether Obama’s approval ratings qualify as ordinary or extraordinary depend on the point of comparison. It is not particularly surprising that Obama’s approval significantly exceeds that of Bill Clinton, who won a three-way election with only about 43 percent of the popular vote, or George W. Bush, who won in the most controversial fashion imaginable after the Bush v. Gore decision.

In comparison with Ronald Reagan, however, Obama’s approval is quite a bit more impressive. Indeed, it is hard to mount a credible argument that Reagan began his term with more political capital than Obama: 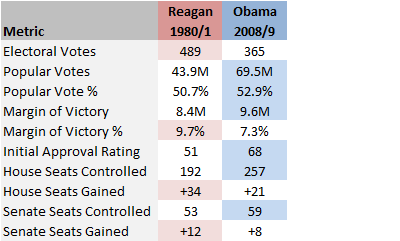 Reagan won considerably more electoral votes in 1980 than Obama did in 2008. As measured in percentage terms, his margin of victory over Jimmy Carter was larger than that of Obama over John McCain. On the other hand, Obama won a lot more popular votes than Reagan did. He also won a higher percentage of the popular vote, and his margin of victory was larger than Reagan’s in absolute (rather than percentage) terms.

The Republicans made greater gains in both the Senate and the House in 1980 than the Democrats did in 2008. On the other hand, the Republicans were starting from a much lower baseline, and if one considers the previous midterm to be part of the same political cycle, the Democrats gained more seats in each chamber over 2006/08 than the Republicans did over 1978/80. The bottom line, perhaps, is that Obama’s party controls considerably more seats in both chambers of Congress than Reagan’s did in 1980 — indeed, Republicans were still a considerable minority in the House in 1980.

And now we have these Gallup approval ratings showing Obama regarded quite a bit more favorably than Reagan was at the start of his term. So in comparison to Reagan, Obama comes out looking pretty good.

A skeptic could rightly point out, on the other hand, that Obama’s initial approval numbers are about the same as Jimmy Carter’s were in 1976 — and Carter certainly did not prove to be a political heavyweight. I suspect that it was indeed easier for a president to begin with something closer to universal approval in past eras than it is now. I suspect also that the tone of the campaign makes a fair amount of difference — the 1976 campaign was, by modern political standards, a relatively genteel one on both sides. The Obama campaign also played relatively nice in 2008, although they certainly did not always do so.

The interesting and probably unanswerable question is to what extent Obama owes his high approval ratings to his inclusive/”post-partisan” rhetoric, and to what extent his favorability might be eroded by a cantankerous debate over something like the stimulus. The administration’s decision may be to what extent Obama wants to use up his political capital now as opposed to storing it for the next two, four or eight years. But Obama needn’t be too thrifty, as he has a lot of political capital to spare.