Barack Obama’s favorability ratings have continued to improve as we approach Tuesday’s inauguration. But how do they compare to those of his predecessors?

The two highest initial, post-inauguration approval ratings as measured by Gallup belong to presidents who took over for others whose terms ended prematurely. About 86 percent of Americans approved of Harry Truman when he took over for FDR. And 77 percent approved Lyndon Johnson when he took over for JFK. The highest initial approval rating for a newly elected president, on the other hand, appears to belong to Kennedy, whom Gallup pegged at 72 percent approval shortly after his inauguration in 1961. 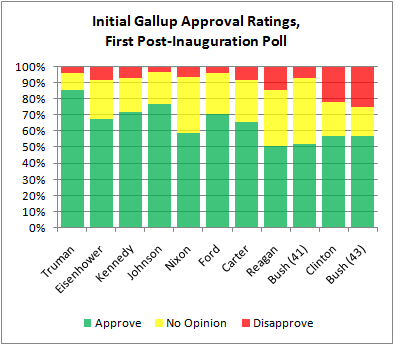 Barack Obama has an excellent chance to exceed Kennedy’s numbers. The Pollster.com averages show that 70 percent of Americans have a favorable impression of Obama versus 16 percent unfavorable. Although favorability ratings aren’t the same thing as approval ratings, they tend to closely track one another. Also, it appears that there may typically be something of a bounce in an incoming president’s approval scores immediately after his inauguration, so Obama’s numbers may (temporarily) get even better.

My guess is that when Gallup comes out with its first post-inauguration approval ratings for Obama later this week, it will show him with about 76 percent approval, 11 percent disapproval and 13 percent uncertain, which would indeed be the best numbers on record for a newly-elected president. At the very least, Obama is virtually assured of starting out on better footing than his two immediate predecessors in the White House, as Bill Clinton had emerged victorious in a three-way race in which he got just 43 percent of the popular vote, and George W. Bush’s disputed victory in 2000 had come only after weeks of uncertainty and litigation.