New Hampshire: the land of pot roast, fleece-lined jeans and independent-minded voters. Truisms about freethinking New England voters are trotted out every primary year thanks to New Hampshire’s system, which allows unaffiliated voters to participate in either party’s primary so long as they register at the door. (And they can make sure their voting status reverts to independent on the way out — they’ve thought of everything, these Yankees.)

This year’s horse race will place the indie vote on no stumpier a pedestal than usual, though perhaps more idiosyncratically, the most pitched battle on the GOP side is over who will place or show, not necessarily who will win. (Bernie Sanders is a heavy favorite over Hillary Clinton in the two-person Democratic race.) The soon-to-be-gold-plated Republican laurels will likely be going to Donald Trump, who’s a 75 percent favorite according to our polls-only forecast. Marco Rubio and John Kasich are the current second- and third-placers, respectively, according to our weighted polling average, but after Saturday’s debate, it’s clear the sharpest elbows being thrown are by the middle-of-the-pack “establishment” guys looking to scar the front-runners and scramble their way up the leader ladder. Chris Christie seemed like he’d swallowed salt and fire pre-debate and was more than happy to spit them repeatedly at Rubio.

So how does one break out of the middling scrum? Getting New Hampshire’s independent voters to like you? That sure doesn’t hurt, especially since those indies, while prideful of their the-cheese-stands-alone-ness, actually do lean one way or the other, and this year they seem more interested in the Republican race. A survey of New Hampshire voters conducted last week by WBUR and the Mass Inc. Polling group showed that 46 percent of independent respondents were planning on voting in the Republican primary, and 40 percent were planning on voting in the Democratic one.

How significant have independent voters been in past elections? In 2012, self-identified independent voters made up 47 percent of GOP primary voters, and 31 percent of them turned out to love Ron Paul, with Mitt Romney following closely in their affections (Romney won overall, Paul came in second). For a more 30,000-feet-up view of the New Hampshire electorate that year, 38 percent were registered as undeclared, 33 percent were Republicans and 29 percent were Democrats according to data gathered by University of New Hampshire political scientists David W. Moore and Andrew E. Smith in their bodice ripper “The First Primary: New Hampshire’s Outsize Role in Presidential Nominations.”

But what about this year’s race? It has already geared up the story line about independents, with various darlings playing the lead at various points: Kasich and Christie have alternated star and understudy for the past couple of months in the media narrative. As of early February, though, according to WBUR/Mass Inc. Polling’s projected scenarios, the more undeclared New Hampshirites who vote in the GOP primary, the better Kasich will do: 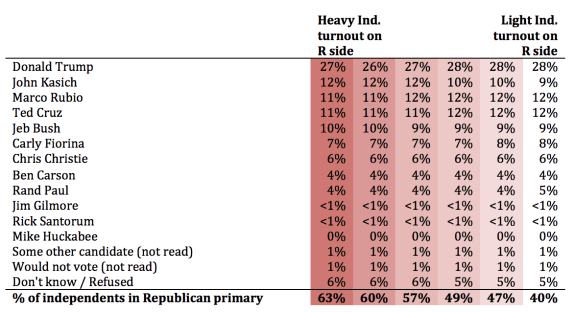 And the Democrats? If the polling is at all accurate, undeclared voters won’t make much of a difference — Sanders is up by a lot either way. (That’s one reason to expect undeclared voters to cast Republican ballots this year; it’s the more exciting race.)

While undeclared voters may affect who finishes second, third and fourth on the GOP side, for all the attention they get, they don’t ultimately make much of a difference in the race. When I talked to Moore, he was more than eager to dispel the myth of the independent voter in New Hampshire altogether. “True independents tend not to turn out,” he said. “Independents are not going to be a significant factor.” He went on to point out that no outsider candidate — someone you think those undeclared voters would spring for — has won the primary without also winning a plurality of registered party voters.

Listen to the latest episode of the FiveThirtyEight politics podcast.