Tuesday night’s Republican debate will be on favorable turf for Mitt Romney: New Hampshire, where he owns a home and has led in every poll of Republican voters, sometimes by a substantial margin.

You would rather be ahead in New Hampshire than behind, of course. At the same time, it’s worth remembering the state’s history of upsetting the apple cart, sometimes when the candidates were least expecting it.

My news assistant, Micah Cohen, has compiled a database of polls in the months before the New Hampshire primaries going back to 1984. 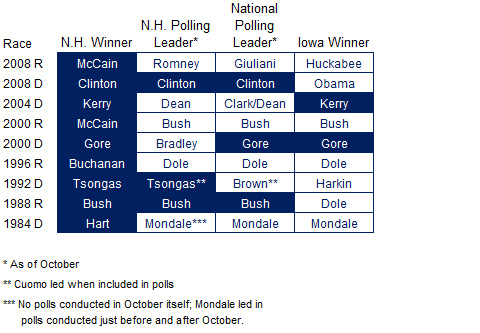 National polls haven’t been a much better guide. The leader in national surveys as of October won New Hampshire on just three out of nine occasions.

Meanwhile, the winner of Iowa has usually differed from New Hampshire. They have matched in just two of nine cases: Al Gore in 2000 and John Kerry in 2004.

Betting markets have Mr. Romney with almost an 80 percent chance of winning New Hampshire. I’d agree that he’s the clear front-runner there, but I wonder if that isn’t a little overconfident.

Herman Cain is certainly a contrarian’s sort of candidate and was up to 20 percent of the New Hampshire vote in the recently-released Harvard-Saint Anselm poll. And he’s the sort of candidate who could get a big bounce out of winning Iowa.

I’ve been extremely skeptical of Jon M. Huntsman Jr.’s chances of winning the Republican nomination. But his polling in New Hampshire — where he averages about 7 percent of the vote — has been livelier than in other states. Even if he’s very unlikely to win the nomination, perhaps Mr. Huntsman could create some drama in New Hampshire, where his moderation might play comparatively well, as John McCain’s did in 2000.

Ron Paul won’t appeal to everyone, but his libertarian message might have more resonance in the “Live Free or Die” state. If the vote were divided between several different candidates, perhaps he could scratch out a win in New Hampshire by getting something like 25 percent of the vote.

Even Rick Perry, although his polls have been moving in the wrong direction, could conceivably win in New Hampshire if he were able to consolidate the conservative vote behind him after a big win in Iowa — although that is looking much less likely now.

As is often a concern when looking at past nomination contests, we should be reluctant to come to too many conclusions given the limited sample size. At the same time, New Hampshire has produced an unusually large number of upsets in recent years: from Gary Hart’s win in 1984 , Pat Buchanan’s in 1996, John McCain’s in 2000, and Hillary Rodham Clinton’s in 2008.

All of the candidates who were the upset victims in those cases — Walter Mondale, Bob Dole, George W. Bush, Barack Obama — went on to win their nominations nevertheless. But Mr. Romney should probably have some contingency plans ready in case New Hampshire’s voters are in a contrarian mood again.