Just under 66 percent of the class of 2013 was enrolled in college last fall, the lowest share of new graduates since 2006 and the third decline in the past four years, according to data released Tuesday by the Bureau of Labor Statistics. Among all 16- to 24-year-olds, school enrollment experienced its biggest decline in at least two decades. The report echoes other recent evidence that college enrollment has begun to ebb after surging during the recession. 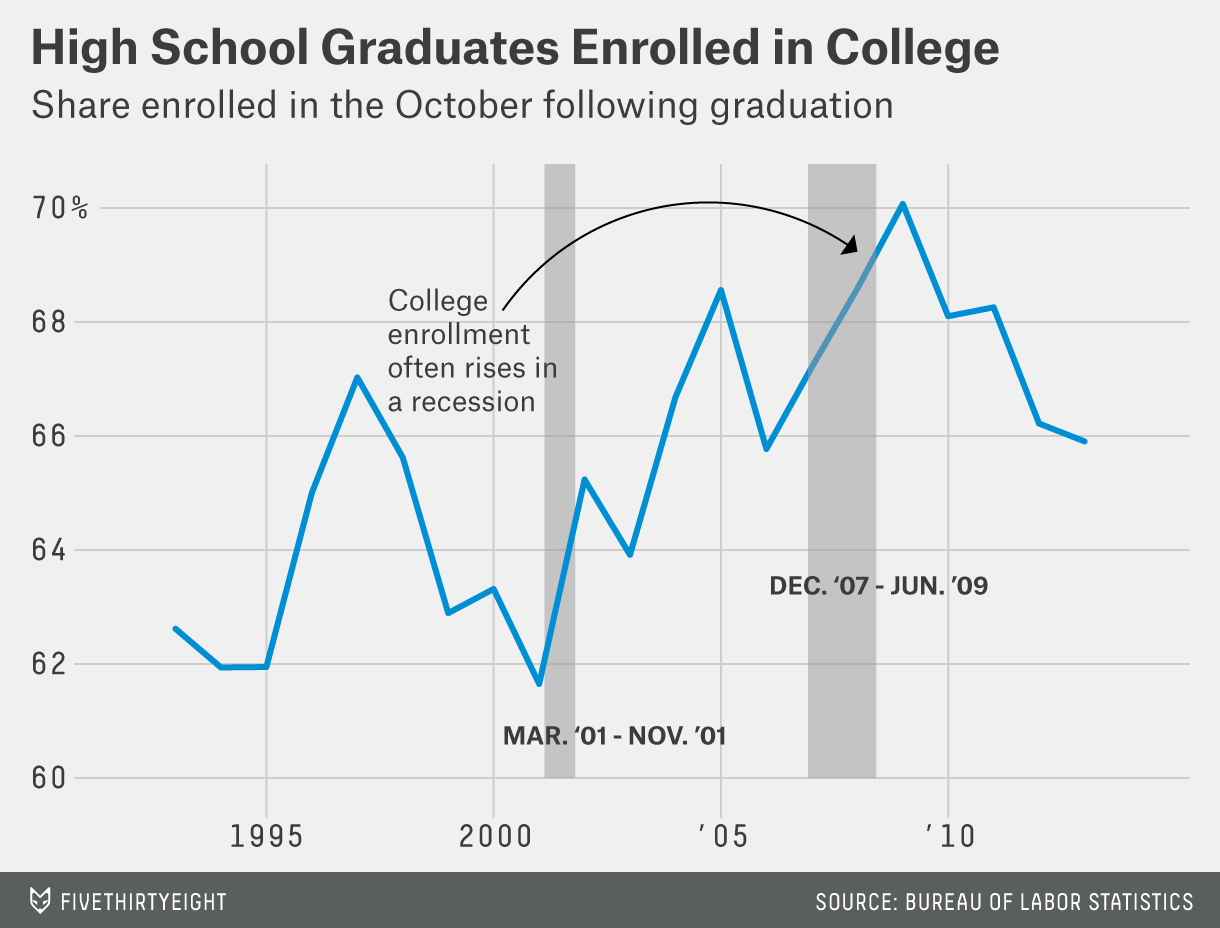 Many analysts have attributed the slowdown in college attendance to the rapidly rising cost of a higher education. But while mounting concern over costs does appear to be putting downward pressure on tuitions, the evidence suggests that the drop in enrollment is being driven by a different factor: the improving job market.

The drop in college attendance among recent high school graduates appears concentrated among groups most likely to be deciding between going to school and joining the labor force: Part-time and community college enrollments saw the sharpest decline. Meanwhile, the enrollment rate increased for four-year colleges, where costs have been rising the fastest.1 (For-profit colleges, which have been subject to mounting criticism over their high costs and inconsistent educational value, have also seen enrollment decline.)

Interestingly, the recent decline was concentrated among women. Women still attend college at a higher rate than men, as they have for decades. But the gap is narrowing: In 2013, 68.4 percent of female high school graduates enrolled in college, versus 63.5 percent of male grads. In the class of 2009, by contrast, 73.8 percent of women attended college, versus 66 percent of men.

The disparity may reflect the better job opportunities available in female-dominated industries than in male-dominated ones. For example, the construction sector, a major employer of young men, has only recently begun to recover from the housing bust, while the health care sector, which employs many young women, has added jobs throughout the recovery.

The racial disparity in college attendance, meanwhile, shows little sign of improvement. Less than 60 percent of African-American and Hispanic members of the class of 2013 were enrolled in college last fall, compared to 67 percent of white graduates. The numbers are volatile from year to year, but neither gap has narrowed meaningfully over the past 20 years. Moreover, young black and Hispanic Americans also have a higher unemployment rate than whites, suggesting they aren’t choosing to skip college because of strong job prospects.

High school graduates who skip college still face grim job prospects. The unemployment rate for recent grads who don’t attend college was 30.9 percent in October, the most recent month for which data is available — more than four times the rate for the population as a whole and up from about 20 percent in the years leading up to the recession.

Nonetheless, the economic outlook is improving, however slowly. Among those 16- to 24-year-olds not enrolled in school, whether high school or college, more are working, fewer are unemployed and a smaller share are out of the labor force entirely. For young people employed full time, median wages rose faster than inflation in 2013 for the first time since the recession. Importantly, the recent drop in college enrollment appears to be driven by high school graduates entering the workforce, not staying home on mom’s couch: Among 2013 graduates who didn’t go to college, 74.2 percent were working or actively looking for work, the highest since 2010. The share of high school graduates who are neither working nor in school fell in 2013.

College enrollment surged during the recession as young people hid from the weak job market by staying in school. The increase was particularly pronounced at community colleges and among older students — those in their late 20s and early 30s — likely the result of people who lost jobs returning to school.

The recent decline in enrollment reverses that trend, but only partly. Enrollment rates remain above their pre-recession levels by most measures. And the recent downtick does little to change the longer-term trend of rising college attendance. In 1982, 26.6 percent of 18- to 24-year-olds were enrolled in college; in 2012, that figure stood at 41 percent, with both two-year and four-year colleges experiencing strong gains over that period.

Indeed, choosing not to go to college can have long-term consequences. The unemployment rate for 16- to 24-year-old high school graduates with no college education was 18.9 percent in 2013, versus 8.3 percent for college graduates.2 And those who do manage to find jobs earn far less than their college-educated peers: Among 25- to 34-year-olds employed full-time, year-round, college graduates earn 50 percent more than those with a high school diploma. Over the course of a career, college graduates earn more than half a million dollars more on average, even after factoring in the cost of going to school.

High school dropouts are in even worse shape. The unemployment rate for recent dropouts was 27.9 percent in October, a figure that would be worse if so many of them weren’t even looking for work. Just 42.9 percent of recent dropouts were either working or actively looking for work in October, down from 56.2 percent before the recession and the lowest rate in the 20 years such records have been kept.