N.C.A.A. tournament games between the No. 1 seed and the No. 16 seed aren’t normally worth watching. No men’s 16th seed has ever beaten a No. 1, and that doesn’t figure to change this year.

But when Duke plays Hampton on Friday afternoon, the game will be worth keeping an eye on for something other than the final score: whether Duke’s spectacular freshman point guard, Kyrie Irving, gets on the floor.

The 6-foot-2 Irving, the potential first overall choice in the N.B.A. draft, has not played since Dec. 4, when he injured his right big toe against Butler. Recent reports, however, are optimistic: Irving is listed as probable for Friday’s game, and will be even more likely to play if Duke advances in the tournament.

If Irving can play even at half-strength, Duke may well be the favorite to win the tournament. Conversely, if he were ruled out of action, the Blue Devils’ chances of cutting down the nets in Houston might be nearly cut in half.

In developing our N.C.A.A. tournament projections this year, we built in a way to estimate the impact of injuries and other types of player absences. The estimates are based on a statistic called Win Shares, developed by Sports-Reference.com, which attempts to quantify a player’s overall value to his team.

Although no catch-all statistic is perfect, the system does a reasonable job. Stars like Brigham Young’s Jimmer Fredette, Ohio State’s Jared Sullinger and Arizona’s Derrick Williams are near the top of the list.

Irving most likely would rank toward the top, too — if he had been healthy this season. In just eight games, during which time Duke went undefeated, he produced the equivalent of two wins. Had he played the whole season, his statistics would extrapolate to 8.5 Win Shares, which would rank him second in the country.

By taking advantage of a relationship between winning percentage and point scoring known as Pythagorean expectation, we can also use Win Shares to measure the difference in the point spread with the player in or out of the lineup. This in turn allows us to estimate his impact when making predictions of future games. 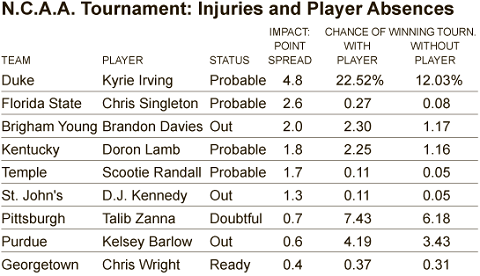 With Irving on the roster, for instance, Duke is about 4.8 points per game better than if he were replaced with an average N.C.A.A. player. (We assume that tournament teams have reasonably deep benches and the player replacing an injured star will be at least decent.) This is a big deal. For instance, if Duke were a 60 percent favorite to beat Kansas with Irving in the lineup, it would have only a 44 percent chance of winning the game without him.

These differences compound over the course of the tournament, because a team is presented with the challenge of having to win six consecutive games against elite competition. Although Duke might survive without Irving in any particular game — certainly it could live without him against Hampton — the injury would probably catch up with the Blue Devils sooner or later.

Our model, for instance, estimates that Duke would have a 23 percent chance of winning the tournament if Irving were certain to play. (The model is conservative and gives players what amounts to half-credit for returning from injury, on the assumption that they could be sluggish; it applies a full penalty if the player goes from healthy to hurt.) That would make Duke the favorite over Ohio State, which has about a 20 percent chance to win.

By contrast, Duke would have just a 12 percent chance of winning without Irving, only about half as much.

Even players who are not as talented as Irving can have large impacts on their teams’ fortunes, particularly if their teams are not as deep as Duke. In suspending Brandon Davies for honor code violations, for instance, Brigham Young reduced its chances of winning the tournament from 2.3 percent to 1.2 percent.

The tournament is so competitive that an injury even to a role player can have some measurable impact. Pittsburgh’s Talib Zanna, a backup forward who provides rebounding off the bench, cut the Panthers’ chances of winning the tournament to 6.2 percent from 7.4 percent because he is doubtful for tournament action.