NOTE: I will be out at a benefit in New Jersey tonight, but will be following the health care proceedings (and the basketball tournament) from my phone. And you can follow me on Twitter.
____

Any analysis of the political ramifications of the passage of health care reform probably needs to separate out the macro-level effects (the impact on the overall political environment for the Democrats) from the micro ones (the effect on individual races — particularly in the context to each individual member’s vote). One potential effect, for instance, is that the political environment for the Democrats will be somewhat improved nationwide versus the world in which the healthcare negotiations had collapsed, but that some individual members who voted for their bill are imperiled.

Here, in any event, is a rudimentary estimate of the Democrats that might be taking the biggest risk with their yes votes. I’ve built a risk index starting by taking the district’s PVI — for example, I’d score an R+3 district at 3 points, or a D+2 district at -2 points. Then, I add or subtract points based on the race ratings from Cook Political, CQ, Rothenberg, and Larry Sabato: +5 points for a toss-up (or lean Republican) race, -5 points for a likely Democratic hold, -10 points for a safe Democratic seat, and 0 points for leans Democratic, which is assumed to be the default condition. (In cases where the ratings sometimes differ from forecaster to forecaster, they are averaged together). Finally, I add 5 points if the vote is a flip from no to yes. Democrats who are retiring from electoral politics are not considered. 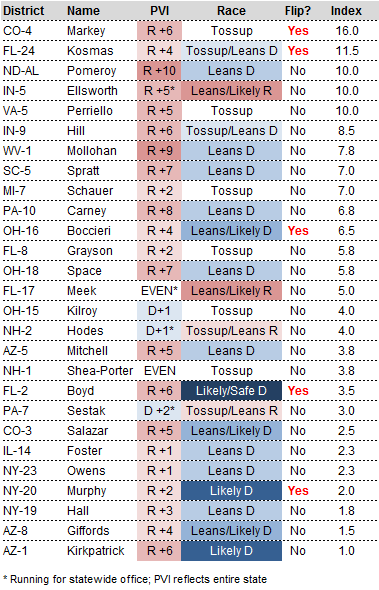 The gutsiest/riskiest yes vote appears to be from Betsy Markey, who is in an R+6 district that is rated as a pure toss-up by all the forecasters, and who originally voted no before announcing her intention to switch a couple of days ago. If she loses her seat, she will probably be the most deserving of comparisons to Marjorie Margolies-Mezvinsky, who cast the deciding vote in the Clinton budget in 1994 and lost her seat soon thereafter (and says she’d gladly do the same thing again.)

Obviously, the votes have not been cast yet, so these reflect my best guesses as to who will vote yes.