5:20 [Renard] Best the Lib Dems could ask for is legitimacy at this point — something only the Tories would be able to do. Embarrassing losses in Edinburgh South, Oxford East, Devon Central, etc have shown they are not ready yet to be a national force.

5:18 [Thomas D] The Lib Dems sure blew it, but can they win by losing? A Labour/Lib Dem coalition looks out of the question now–not only will it not be a majority, it probably won’t even equal the Tories’ total. How about a Tory/Lib Dem government in exchange for electoral reform–more likely instant runoff voting than proportional rep.? The Tories get a real govt., and the Lib Dems get their Holy Grail/single-payer system/White Castle burger/female Viagra.

5:16 [Renard] Also, good pickup by the Tories in Cardiff North. Strong showing altogether in Wales for the Conservatives.

5:13 [Renard] Nice hold from Labour in Southampton Itchen. Survived a 10.3 point swing from the Tories.

5:03 [Daniel B] Karen Buck in Westminster north made it out for a Lab hold; Lab to Con swing of just 0.6 percent.

4:58 [Renard] Edinburgh South is a slim hold by Labour by 0.7 percent or 316 votes; Lib Dems are really missing their chances.

4:55 [Renard] Mad Cap’n Tom? Wasn’t he the House majority leader from Texas a while back? I always wondered what his next move would be.

4:54 [Thomas D] Conservative Mark Field won the Cities of London and Westminster with 52%. (A majority!) Not a surprise in a safe Tory seat. Still, want to commend the 84 voters who cast their ballots for Mad Cap’n Tom, an Independent candidate.

4:36 [Renard] Hold for the Lib Dems in Carshalton & Wallington. Pulled a 4.3 point swing from the Tories.

4:33 [Nate] Good hold for Labour in Luton South — that’s the sort of seat Conservatives would want to claim a majority.

4:32 [Thomas D.] Still waiting for returns from Greater London and what Conservative pickups there are there. The BBC’s map is showing a real North-South divide, with Labour’s support clustering in Scotland, Wales and the north of England. And personally, I’m waiting for Penrith and the Border, to see if Rory Stewart goes to Parliament.

4:22. While Scotland has been pretty dull (of 54 reporting seats, no changes), Wales has been flipping all around. Tories are have picked up 4, Labour have lost 4 and gained one , Lib Dems are just down one, and Plaid Cymru gained Arfon as expected.

4:15 [Renard]: Devon Central (Con hold, LDs needed 1.85 percent swing to flip it) shows the Conservative strength. This seat is in the heart of the South West, with LD seats all about in the region surrounding.

4:11 [Daniel B.]: Ed Balls (Normanton) is in a recount; this is one the Tories would really relish.

4:08 [Renard]: Hampstead and Kilburn will be an important seat to watch as well. Strong pick-up change for the Tories based on recent performance in local elections, but Lib Dem surge was seen there and the Labour incumbent not bad.

4:02 AM [Nate]: Stockton South was another good pickup by Conservatives, as was Wyre Forest. Their chance of claiming a majority, whilst not great, is better than generally believed.

4:00 AM [Renard]: For all you Lib-Dem watchers out there, the next seats to pay attention to will be Edinburgh South and Solilhul.

3:56 AM [Daniel B.]: The Liberal Democrats are actually beating Labour in England in terms of votes, but they are down 54-15 on seats. So even without Scotland and Wales
they still have a lopsided advantage.

3:47 AM. If the trouble in polling previously was the “shy tory,” it seems this election around it is the “loud but flaky Lib Dem.”

3:36 AM. In Dunbartonshire West, it was the SNP who lost in second place (by far), but again a swing towards Labour of a whopping 5.5 percent, with the SNP and Lid Dems both losing ground.

3:34 AM [Renard]: Looking at Scotland, there was actually a LD to LAB swing of2.1 percent in Dunbartonshire East (LD hold), which suggests little LD progress will be seen in the Edinburgh seats either.

3:14 AM. [Daniel B.]. Wales is equally lopsided for Labour, 22 out of 29 seats on 37% of the vote. A particular note must be reserved for the Scottish Tories who are now leading the Liberal Democrats but have failed as of yet to win a seat. Their odds of taking more than 2 at this point are quite limited.

3:10 AM. If you interpolate from the votes counted so far in Scotland, Wales and England, the national vote share (excluding Northern Ireland) would be Conservatives 37.1, Labour 28.5, LibDems 24.0.

3:04 AM. Cameron’s body language suggested a touch of disappointment.

3:03 AM. [Daniel B.] A quick look at the BBC list of announced results reveals the Labour bias in the electoral system.The Conservatives, despite a 3% lead in votes cast, actually trail Labour, 76 to 73 on seats. This has a lot to do with the districts, but also the lopsided margin by which Labour is winning Scotland, with 29 out of 35 seats currently in its hands to 5 for the SNP and 1 for the Liberal Democrats.

2:57 AM. [Thomas D.] British campaigns may be fast, but the counting sure is slow! The polls have been closed for five hours now, and only a quarter of the constituencies have been reported. Can someone bring in Amy Winehouse in a hologram for her analysis of the situation?

2:50 AM. Very few results in from London so far — only 3 constituencies have reported.

2:45 AM. Two impressive Tory gains in Erewash (from Labour) and Harrogate (from LDs). The Conservative-LibDem marginals in particular appear to be behaving very unpredictably.

2:43 AM. Finally a LibDem gain — from Conservatives in Eastbourne.

2:39 AM [Thomas D.] As the Lib Dems look like they’re having a flop of Howard Dean proportions, the pundits will surely be asking what went wrong. Could be a case of too much tact. As a Tory government looked more likely in the past week, and Clegg flirted with joining a Tory coalition, leaning Lib Dem voters could have reverted back to Labour.

2:37 AM. LibDems hold off Conservatives in Somerton & Frome.

2:27 AM. Now Conservatives are starting to get some quite good results in marginal constituencies.

2:23 AM. Big and somewhat surprising Conservative gain over LibDems in Montgomeryshire, Wales.

2:17 AM. Hard to find many patterns here, to be honest, other than that LibDems are having a very disappointing night.

2:11 AM. Intrade chances of Conservative majority down to 37.3. Clearly Labour are getting some better results here than they were early in the night — the hold in Gelding, for instance.

2:06 AM. Conservative gain from Labour in Loughborough. However, as they only needed to make up 4 points there, that was widely expected.

2:04 AM (BST). Trying to process everything, but in general think Labour’s chance to prevent a Conservative majority is increasing based on results seen in last 1/2 hour or so.

2:03 AM (BST): Labour gained a seat from other in Blaneau Gwent.

1:50 AM (BST). Labour starting to get some better results now, such as a good hold in Tooting that wasn’t guaranteed. Both we and uniform swing had the Conservatives winning that seat, though we made a bigger error as we had a 6.5-point Conservative win there.

1:46 AM (BST) [Daniel Berman]: It’s worth noting that the country as a whole is recording a swing against the Liberal Democrats, something especially pronounced in Scotland where their former leader, Menzies Campbell, saw 5% swing against him. The fact that they failed to take City of Durham, one of their top targets, and in fact only gained a .6% swing, may argue that the Clegg surge, by diffusing and confusing their targeting strategy may have actually cost them seats they otherwise would have taken on their past record of maxmizing their votes in target seats.

1:37 AM (BST). Becoming difficult to track everything but at a macro level. Labour has lost 3 seats so far, 2 to Tories and 1 to Plaid Cymru.

1:26 AM (BST). Intrade now gives Conservatives about a 65 percent chance of claiming a majority.

1:18 AM (BST) [Thomas D.] As Dan Berman pointed out today, Scotland remains a Labour-SNP battleground, with the Conservatives effectively shut out. And even after a big win tonight, the Tories will still likely have no more than a couple of Scottish seats. What will it mean for Scotland if they get a Westminster government that they didn’t vote for, and that owes them nothing?

1:03 AM (BST): In general, we’re doing quite a bit better at predicting the share for the winning candidate. Not necessarily better on predicting totals for 2nd/3rd place, in part because the “other” vote seems to be pretty high.

12:40 AM (BST). Obviously, a significant lull here. I haven’t spent much time thinking about the Northern Ireland results so I’m not in a position to comment on them intelligently.

12:28 AM (BST) [Thomas D.] We’ve been over the shoddiness of exit polls before, but The Guardian shows another reason for disbelief. Even with the Lib Dems running out of gas in the last week, it’s hard to believe that they’d lose seats from 2005. http://bit.ly/cs85M9

11:47 PM (BST). All of those Sunderland district have had boundary changes, so there’s some additional uncertainties there.

11:37 PM (BST). Bottom line: the first two results imply a greater chance of a Conservative majority than implied by the exit polls.

11:28 PM (BST). Uniform swing botched that one badly on Labour’s total. We were a bit closer, but still too low high.

11:23 PM (BST). Washington and Sunderland West next to report. We would forecast Labour 58, Conservatives 22, LibDems 20 in that district, assuming national results of 38/28/23. Uniform swing would project Labour 61, Conservatives 20, LibDems 16.

11:13 PM (BST). Caveat: the Sunderland South results may be an especially dodgy data point because that constituency had a significant boundary change.

11:06 PM (BST). It’s just one constituency, but as the only hard data point so far, Sunderland South results imply that EITHER uniform swing is wrong-ish (and our proportional model is right-ish) OR that Conservatives did even better (and Labour even worse) than the exit polls suggested. Either conclusion would be bad news for Labour.

11:02 PM (BST). Without making the regional adjustment, our model would have forecast Labour 49%, Conservatives 22%, LibDems 16% in Sunderland South.

10:47 PM (BST). Not sure if those BBC numbers are in marginal seats or countrywide. If countrywide, would be pretty close to the numbers we assumed below (Conservatives 38.5, Labour 29.3, LibDems 23.3) and would probably imply a Conservative majority if our non-uniform model is the right approach.

10:35 PM (BST). It’s quite frustrating that we don’t know what assumptions, and what raw numbers, went into the exit poll projections.

10:32 PM (BST). If the exit pollsters are using something more advanced like the PoliticsHome model to project their results — which accounts for Scotland results and gives Conservatives some extra credit in marginal districts — we’ve generally been about 20 seats higher on the Conservative totals than their model on the same numbers. So that would imply Conservatives at ~327 seats, almost exactly the 326 they need for the majority.

10:21 PM (BST). The one thing that’s fairly unambiguously implied from the exit poll is that LibDems dropped significantly from their polling averages. Our model does not really differ at all from uniform swing on LibDem totals if they were only in the range of say 22-24% of the vote.

10:20 PM (BST). Be VERY careful with the numbers below. There’s a LOT we don’t know (or they’re not telling us), including precisely how the seats projection was extracted from the exit poll. 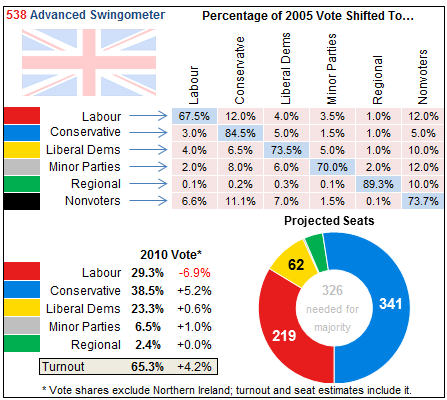 10:11 PM (BST). If the exit polls are right but the seat projections are based on uniform swing, we would show a Conservative majority on those numbers.

10:07 PM (BST). We would obviously project a more favorable result than just 307 seats for Conservatives on those numbers. Calculating now.

10:06 PM (BST). IF they’re using straight uniform swing to project the numbers, that would imply a popular vote result of about Conservatives 38.5, Labour 29.3, LibDems 23.3.

10:02 PM (BST). BBC nerd says: “The exit polls are based on uniform behavior”, a.k.a. uniform swing. So we haven’t really learned anything about whether uniform swing is the right approach; it’s baked into the projection.

10:01 PM (BST). That would actually be a DROP for LibDems from the last election.