There was a moment in the fourth quarter Sunday night, just before the Thunder officially found their backs against the playoff wall, when Russell Westbrook had a decision to make. He had Blazers center Enes Kanter defending him in a 1-on-1 scenario in the corner, backpedaling — an instruction that was reportedly being shouted at Kanter by members of the Portland bench,1 who wanted Westbrook to be goaded into taking the low-percentage shot attempt from 3-point range.

Westbrook, as he often does, took the defense’s bait and missed the shot, one of his 16 that misfired Sunday. Oklahoma City lost and is now down 3-1 to Portland in a series the Thunder were heavily favored to win, mainly because of their regular-season sweep of Portland and the absence of Blazers star Jusuf Nurkic.2 If they are unable to pull off the series comeback, it will be the third consecutive first-round elimination for Westbrook and his club. And when the dust settles, it will be more than fair to question how big a role Westbrook’s struggles are to blame for that.

There are a handful of relatively clear reasons why Portland is winning, of course. Kanter has been solid and has surprisingly replaced a great deal of Nurkic’s production, even on the defensive end at times. Damian Lillard has perhaps been the MVP of the playoffs thus far, while teammate CJ McCollum has been locked in since returning from his late-season knee injury. And most obvious: Portland has three players — Lillard, McCollum and Al-Farouq Aminu — shooting 40 percent or better from three,3 while the Thunder have none.

But it’s hard to explain OKC’s failures here without mentioning Westbrook, who shot 5-for-21 in Game 4, including an 0-for-7 showing in the second half — the worst half of his playoff career. All told, he’s averaging 21 points, eight rebounds and almost 10 assists per game against Portland but is doing so with terrible efficiency, connecting on just 36 percent of his shots and 30 percent of his threes. It’s made for a pretty ghastly looking shot chart. 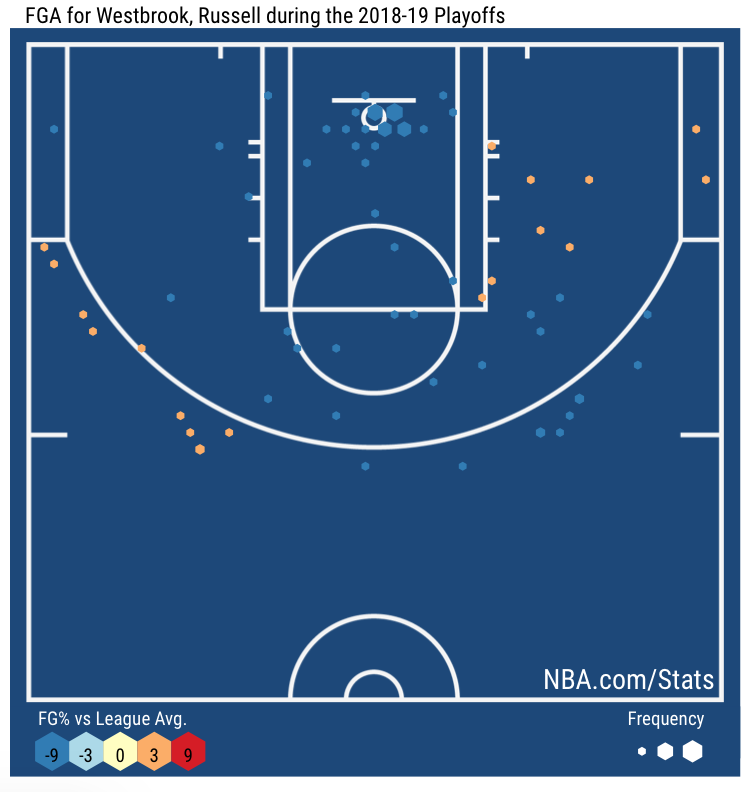 Fellow star Paul George deserves blame, too. We wrote earlier in the season that George had finally begun to take control of the team from an offensive standpoint. George’s percentages are only slightly better than Westbrook’s, and his dropoff in production — because of his injured shoulder or otherwise — has a lot to do with the Thunder struggling to get out of the first round.

Yet there are key differences between the players. First, George is balancing his shooting woes some by aggressively going to the basket, attempting more than 10 free throws a game — almost twice as many as Westbrook. This postseason is on pace to be the third-straight for the Thunder (all since the departure of Kevin Durant) in which Westbrook shoots worse than 40 percent, an obstacle for OKC to overcome given how big a part of the offense he accounts for. The distinction of George recognizing his shortcomings and adjusting seems particularly significant here, though. Westbrook’s gunslinging mentality — and insistence on trying unsuccessful jumper after unsuccessful jumper — often kills any sort of offensive rhythm the Thunder manage to muster.

And in continuing to take those jumpers, he makes life far easier on opponents. Since his MVP season in 2016-17, in which he shot slightly worse than league average from behind the arc, Westbrook has not only shot worse than 30 percent from deep in consecutive seasons, but he has also done so while taking almost five attempts per game. That’s largely the problem here. Teams are often unable to stop Westbrook once he gets to the rim, where he shot a career-best 65 percent this season. So why is he so hellbent on settling for wide-open jumpers, on which he was the least-efficient player in basketball all season?4

To be clear, no one is questioning Westbrook’s talent. His end-of-season performance against the Lakers, in which he scored 20 points, grabbed 20 rebounds and dished out 21 assists, was one of the more underrated and remarkable feats the league has seen in some time. And it largely happened because Westbrook willed it to happen, saying after the game that it was an effort to honor slain rapper and activist Nipsey Hussle.

But that’s seemingly the question at play: If Westbrook can simply snap his fingers and put his imprint on the game the way he wants to at times, why does he opt to settle for the sorts of shot attempts that he rarely gets to fall? His lack of consistency — which seems bizarre to knock after seeing him average a triple-double for the third straight year — becomes amplified in a postseason setting, where transition possessions are limited, each shot is meaningful, and every loss feels close to fatal.

The biggest question that lies ahead, assuming OKC doesn’t complete a 3-1 comeback, is what all does Thunder general manager Sam Presti needs to do to retool this club around Westbrook and George (both at the front end of big-money, long-term contracts) to break through this first-round wall? Some may suggest ousting coach Billy Donovan, who’s now completing his fourth year. And even beyond Westbrook, the team’s perimeter shooting is highly problematic, something that’s been the case for a while now.

We know from past instances that Presti won’t be shy about shaking things up. But if the Thunder are going to find themselves back in the Western Conference Finals anytime soon, they’re almost certainly going to need a more consistent version of Westbrook to get there.