Watson stares at the list, but he can’t make out any sort of pattern.

But Holmes’s eyes light up. “Why, it’s elementary, my dear Watson!”

What pattern did Holmes notice? 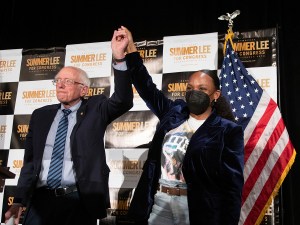 From Ross O’Brien comes a game of nonconformist dice:

You have four fair tetrahedral dice whose four sides are numbered 1 through 4.

You play a game in which you roll them all and divide them into two groups: those whose values are unique, and those which are duplicates. For example, if you roll a 1, 2, 2 and 4, then the 1 and 4 will go into the “unique” group, while the 2s will go into the “duplicate” group.

Next, you reroll all the dice in the duplicate pool and sort all the dice again. Continuing the previous example, that would mean you reroll the 2s. If the result happens to be 1 and 3, then the “unique” group will now consist of 3 and 4, while the “duplicate” group will have two 1s.

What is your probability of winning the game?

Last week, you were on the 10th floor of a tower and wanted to exit on the first floor. You got into the elevator and hit 1. However, this elevator was malfunctioning in a specific way. When you hit 1, it correctly registered the request to descend, but it randomly selected some floor below your current floor (including the first floor). The car then stopped at that floor. If it wasn’t the first floor, you again hit 1 and the process repeated.

Assuming you were the only passenger on the elevator, how many floors on average did it stop at (including your final stop, the first floor) until you exited?

Suppose the average number of stops from floor i was Ei. You immediately knew that E1 was 0, since there were no further stops after the first floor. You also knew that E2 was 1, because once you were on the second floor, you were guaranteed to reach the first floor on your very next stop.

Things got a little more complicated on higher floors. Suppose you were on the Nth floor. From there, you had a 1/(N−1) probability of stopping on each of the lower floors. And from each of those floors, you had a corresponding average number of stops remaining. Many solvers, including Adnan Haque, realized this meant you could write an equation for EN:

The 1 that was added at the end came from the fact that the button press on the Nth floor accounted for one stop. Multiplying both sides of this equation by N−1 gave you:

A key insight was that you could also derive a similar equation for EN+1:

Substituting one of those equations into the other helped you eliminate all those pesky averages from the lower floors, leaving you with:

And rearranging this equation left you with the much simpler recurrence relation:

Solver Oscar Lanzi III arrived at this same equation in a slightly different way. From the (N+1)th floor, you had a 1/N chance of next stopping on the Nth floor, and a (N−1)/N chance of going to any other floor — which was collectively equivalent to starting at the Nth floor. As an equation, this meant:

Sure enough, this simplified to the exact same recurrence relation.

This harmonic series has appeared in The Riddler before, and I’m sure it will again. In the meantime, consider packing a sandwich for any randomly long elevator rides.

Last week, you had to find optimal prime ladders. Every number in the ladder had to be prime, with exactly one digit changing from one number to the next. For example, here is an optimal prime ladder that goes from 97 to 53 with just four total numbers: 97, 17, 13 and 53.

This is tied for the longest optimal prime ladder consisting of two-digit primes.

From there, finding the longest optimal prime ladder was equivalent to determining the diameter of this graph — that is, the two connected nodes that are farthest apart.

By the way, since submitting this puzzle to me, Michael Branicky has published the sequence of optimal ladder lengths on the On-Line Encyclopedia of Integer Sequences. Riddler Nation strikes OEIS again!