This is review No. 11 of 16 in the first round of our competition. Each review will compare four burritos, with my favorite advancing to Round 2.

This week, my third in what we’ve defined as the Northeast, I head north from the outskirts of the nation’s capital to Philadelphia to eat two burrito anomalies, as well as a couple of classics. 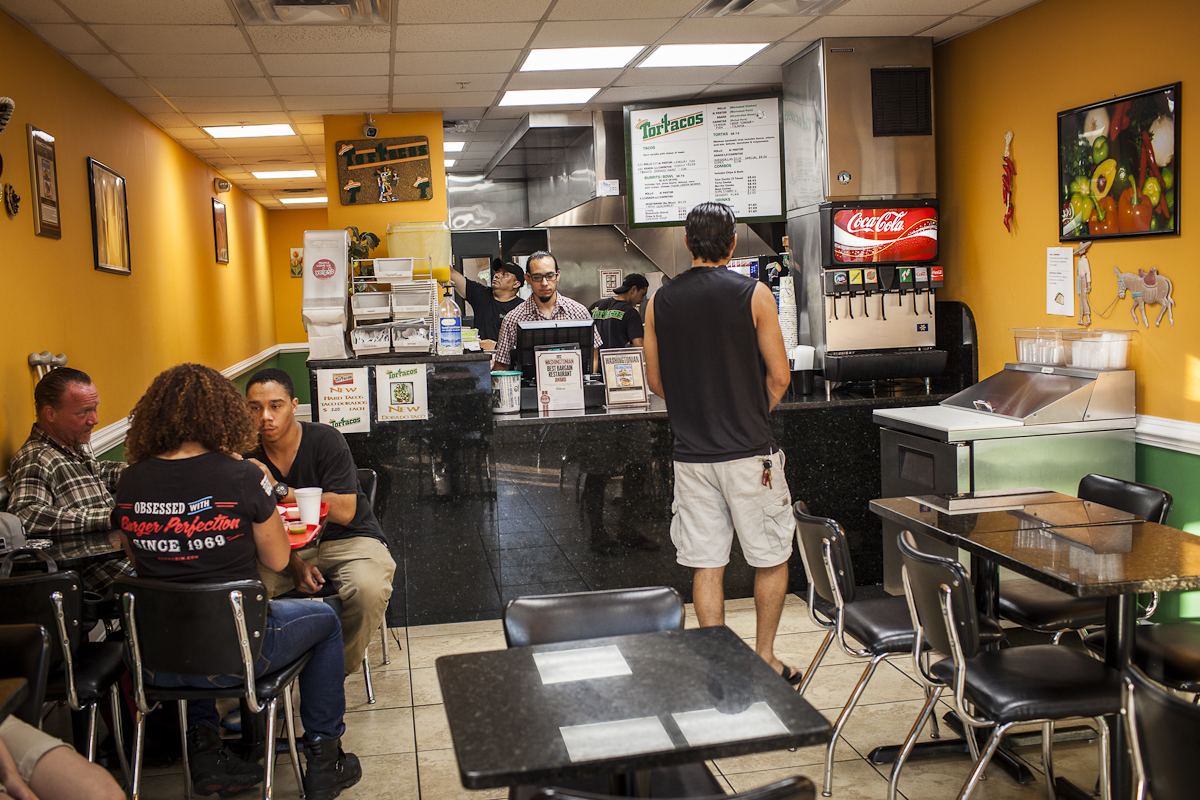 I’d been off the burrito trail for a few days when I set out for Tortacos, and I was anxious to get my burrito on. I drove north from D.C. during rush hour, witnessing multiple accidents and a plethora of roadkill amid bumper-to-bumper traffic. When I arrived (safely) at my destination, I found a small strip mall among strip malls featuring an El Salvadoran pupuseria, a Peruvian barbecue restaurant and Tortacos, a Mexican taqueria. The owners of Tortacos came to D.C. from California and were shocked by the lack of good Mexican food in the nation’s capital. They decided it was time that those inside and outside the Beltway had a taste of the Golden State.

A handful of tables stand in a room with bright marigold- and lime-colored walls. A small menu offers the traditional taqueria suspects: tacos, tortas, sopes, quesadillas and burritos with carne asada, pollo, lengua or carnitas. And then there is the star that rises above all the other meats.

Tortacos serves masterful al pastor, sweet and slightly tart from pineapple marinade, while also charred from the spit with deep, earthy chile flavors. It’s shaved off in pieces, then layered on the tortilla with pinto beans, a thin sour cream, gooey white cheese, lettuce, corn and rice. After I ordered, one of the owners told me that pineapple freaks out some of the D.C.-ites who are new to al pastor, so Tortacos employees usually ask before they put it in (I wasn’t asked, so there was none in my burrito). I had to pull folds of tortilla off one side of the burrito (at this stage in the bracket, I don’t have any room left for extraneous tortilla), and the burrito was a little dry, but a wide-ranging salsa bar helped sort that out.

The chips were exceptional, thick and intensely crunchy with large crystals of salt. The horchata was aromatic and slightly sweet, yet refreshing — a difficult balance to achieve. 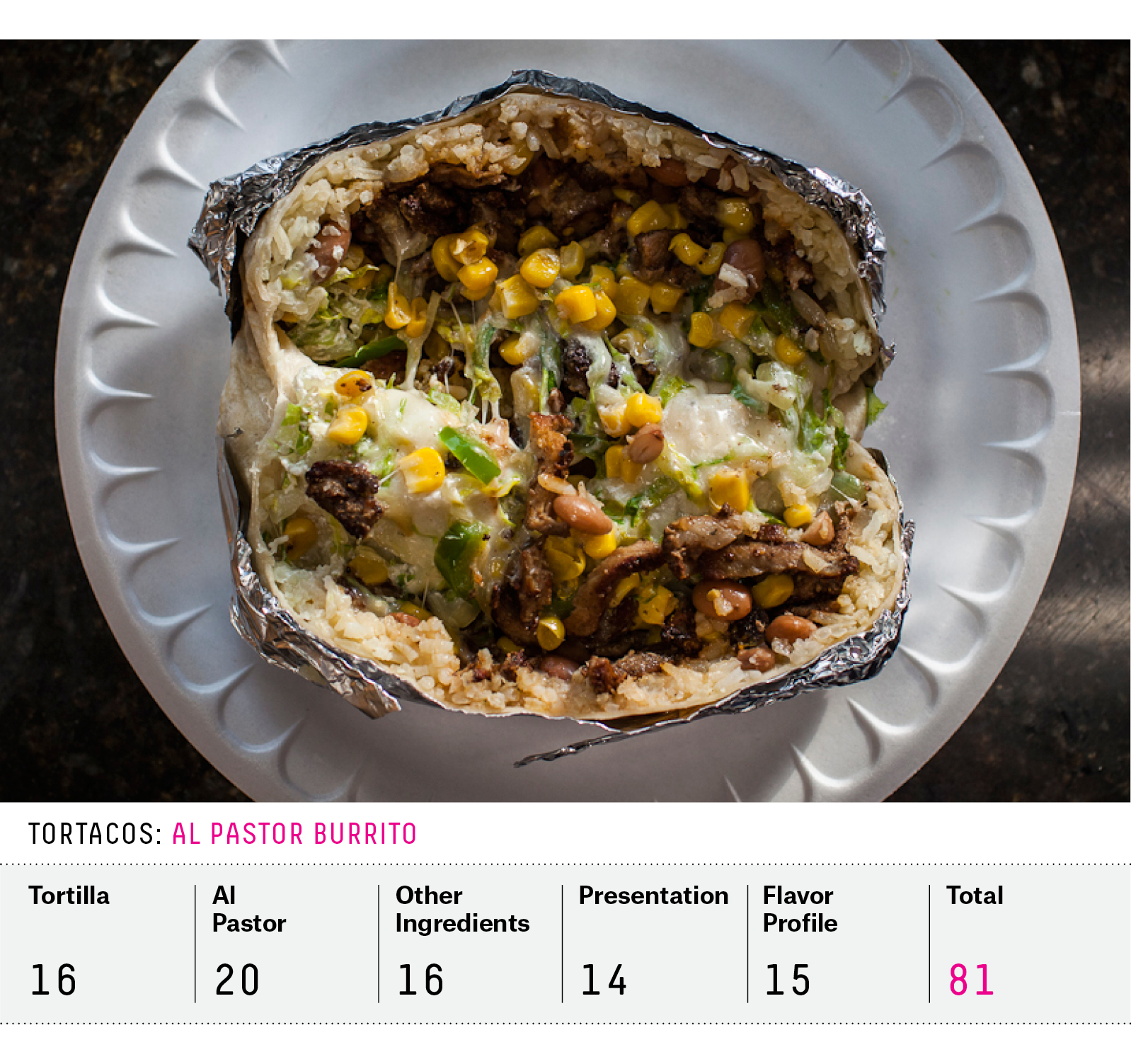 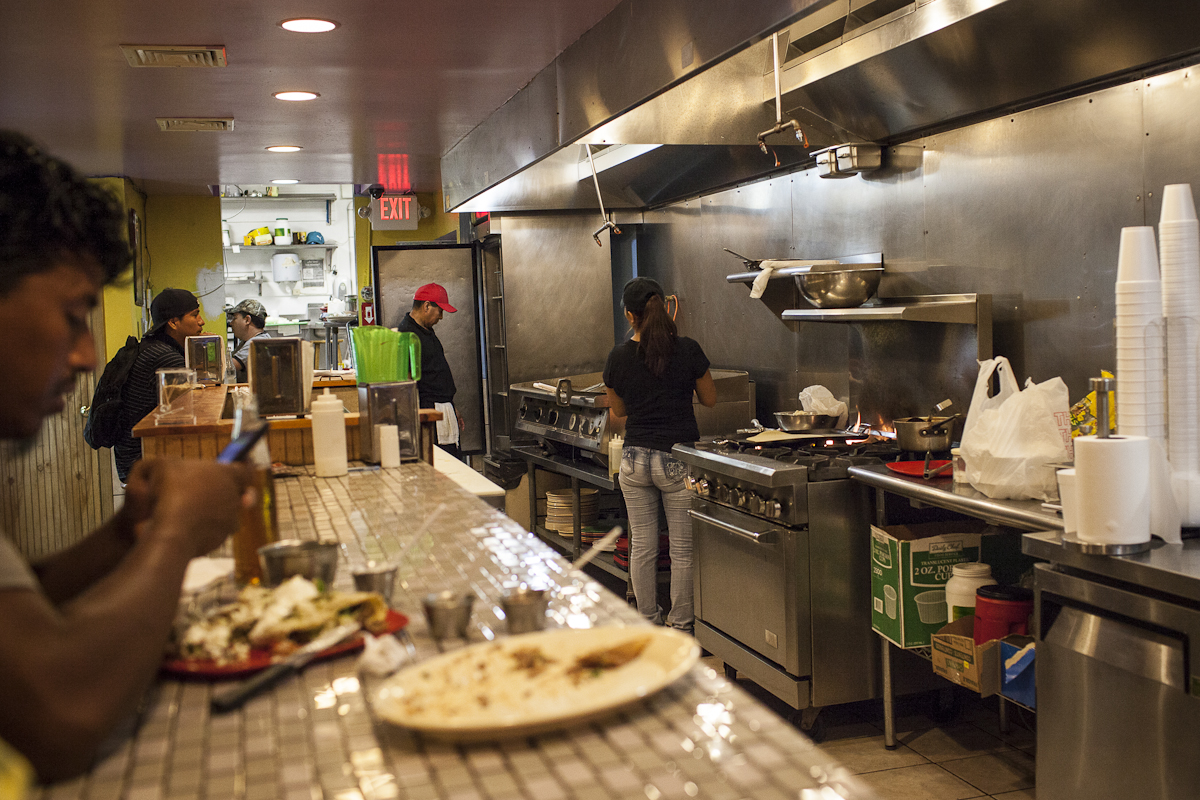 Atlantic City is both seaside town and casino alley. The boardwalk is flanked by the beauty of the seemingly infinite ocean on one side and enormous, cheesy buildings referencing architecture from the Wild West and the Taj Mahal on the other. The most famous culinary landmark is a submarine shop called White House, just a few blocks from the boardwalk. Next door to White House is Pancho’s, a hole-in-the-wall Mexican restaurant with a lunch counter and a few tables that has mostly flown under the radar. The Burrito Selection Committee learned of its wonders from chef David Chang, who worked a brief stint in Atlantic City while preparing to open his first Momofuku restaurant.

The entire experience of eating at Pancho’s was strange. I somehow become entwined in an internal family feud that meant one man was incredibly nice and chatted with me while I ate, while another was grumpy and angry when I pointed out that I was given a bill that wasn’t mine. I asked for the avocado and cilantro that are supposed to come with every burrito and was curtly told there were none, a major disappointment for my first order. Then they miraculously appeared with the second. It was the kind of uncomfortable dining experience that could have sent me home to write a scathing review on Yelp. The trouble is, the food at Pancho’s is delicious.

Let’s start with the tortilla. It’s made by hand, and it’s made of corn. At a small stove in the middle of the open kitchen, a woman shapes masa and sets it to cook when you order.

When I asked what the best meat in the house was, I was encouraged to get a combination of meats (I ordered goat and carnitas), which produced a burrito with depth and abundant flavor. I ultimately selected plain carnitas as my favorite (they were smoky and juicy), but there’s no wrong choice. Inside, “mozzarella” cheese oozes around bits of jalapeno and lettuce, melding them together as it cooled. The burrito was topped with crumbled farmer’s cheese and avocado.

By Burrito Bracket standards, the food at Pancho’s is not cheap — each burrito rings up at $10. But that’s a small price to pay for all that TLC. 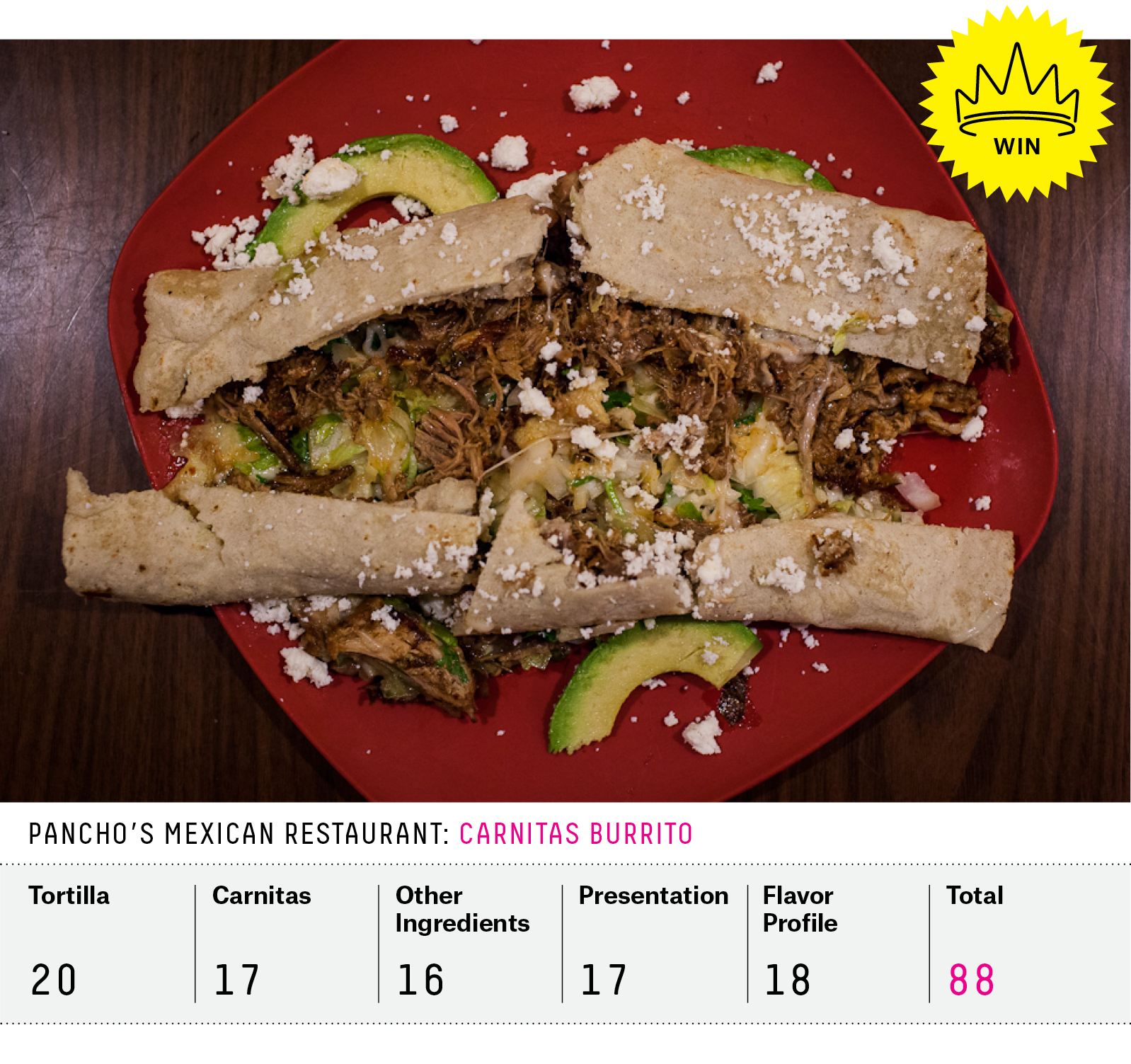 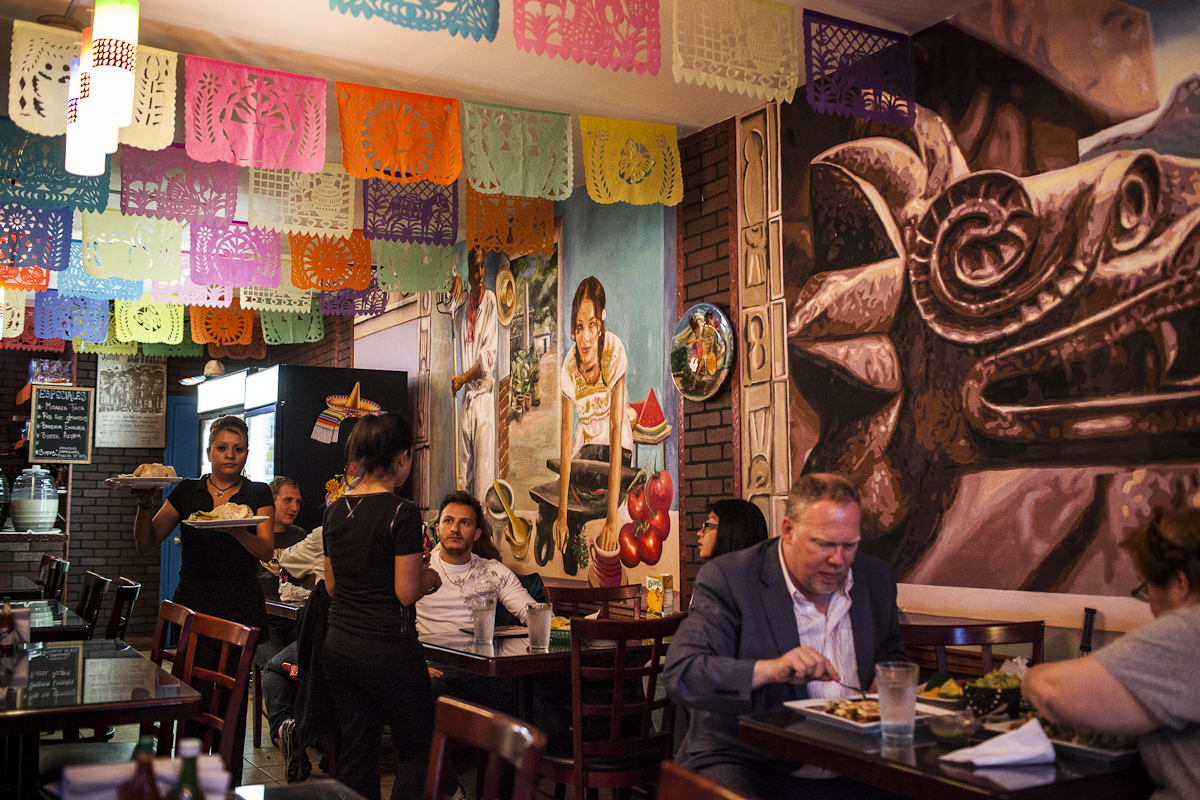 Los Gallos (the No. 3 seed in our Northeast region) is on the corner of a residential street in South Philly. Stand on the front porch, and you’ll see row houses in every direction. In the evening, cars crawl through the narrow one-way streets, hoping a parking space will open up.

Inside, the restaurant is warm and charming. Two windows at the front feature elaborate displays of the Virgin Mary and lights that change from red to green to blue, bathing La Virgincita in technicolor. Colorful paper cutouts hang the width of the ceiling, and murals cover the east wall. A stone serpent and a woman with beckoning eyes and a molcajete stare down at patrons.

My research hadn’t revealed a particular burrito of interest, so I asked the waitress; she suggested carne asada or chicken. I went with the carne asada and al pastor. A few bites in, I realized that I should also give the chicken a try, and it turned out to be the winner. The carne asada and al pastor were fine, the latter laden with fresh pineapple, but all three meats bore the distinct scent and flavor of soy sauce, which was better suited to the chicken.

The cheese is unmistakably fresh mozzarella, soft and chunky inside the burrito, firming up in a thin layer into the seams. Inside there was also yellow rice, porridgelike and dense, red and green peppers sliced and sautéed, onions and corn. Each burrito was served with a side of avocado.

Los Gallos is BYOB, but enormous glass vessels at the front display an array of house-made nonalcoholic items, all of which are worth a try. 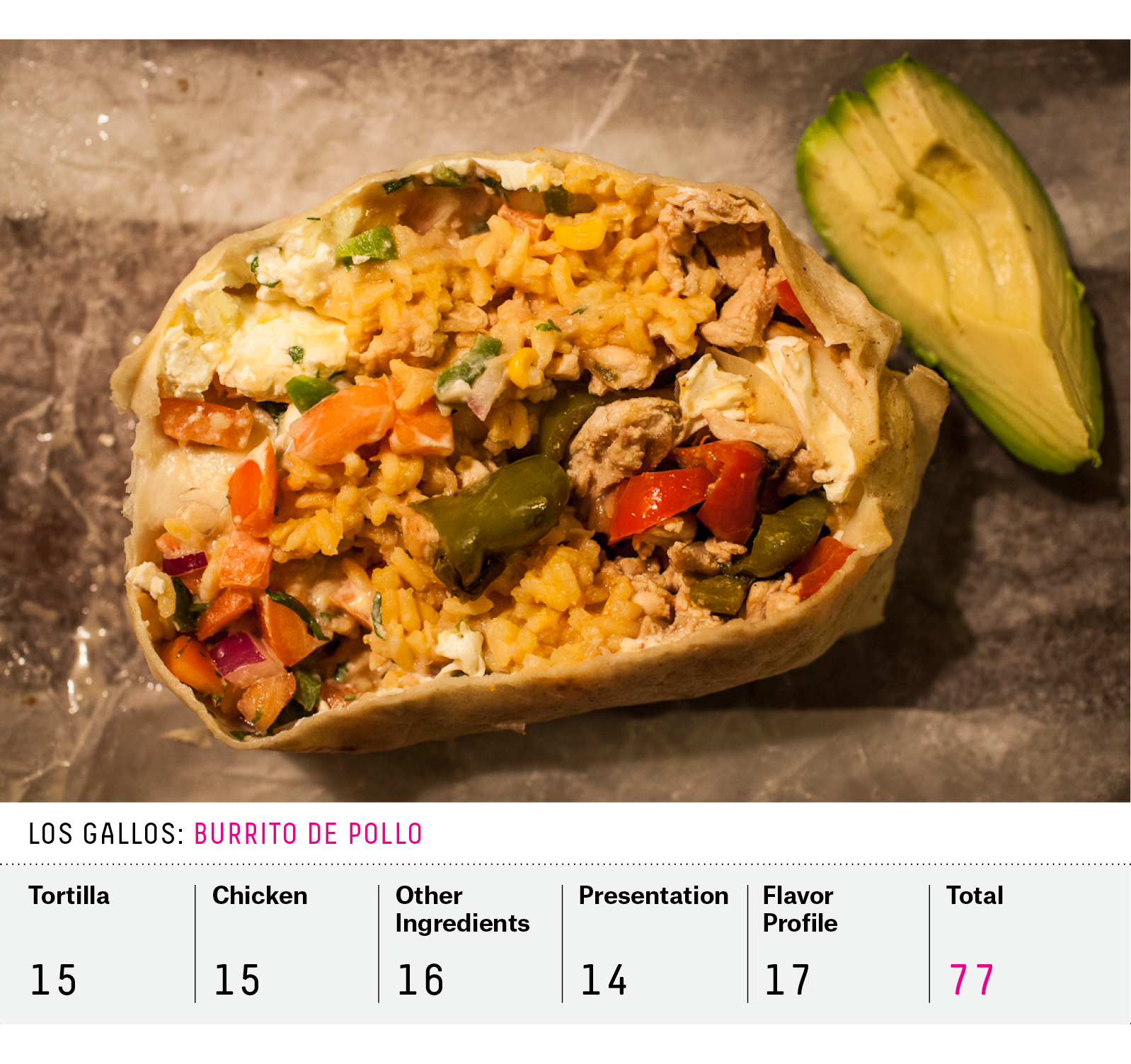 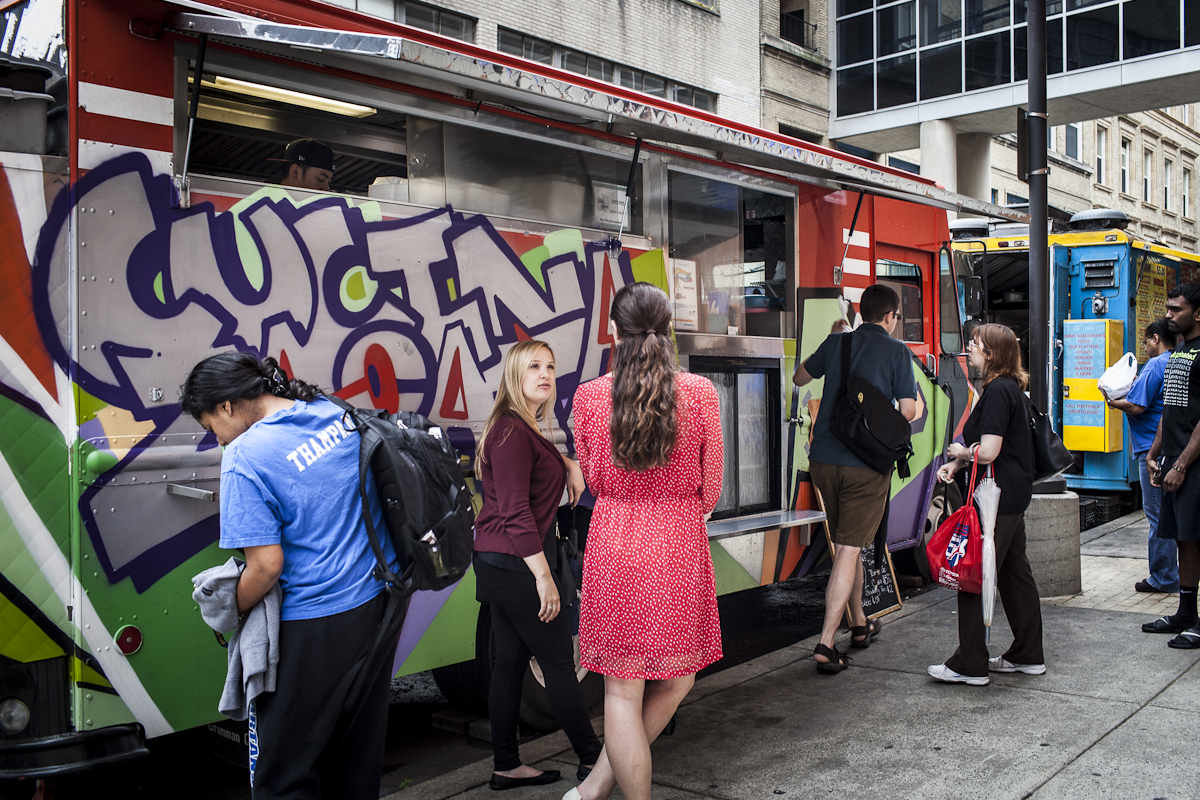 On a dead-end alley behind a handful of Drexel University buildings, food trucks gather each weekday at lunchtime. Students, university employees, construction workers and others wait at the dozen or so vehicles, but truck has a line at least twice the length of the others combined: Cucina Zapata. The truck is graffitied in bright colors, and cardboard stuck in the front windows reads “Zapata Cucina.” The truck’s Twitter bio says it all: “Remember when you were like, Damn, I could go for some thai food…in a taco. Well, here it is. You’re welcome.” And if its Twitter feed is accurate, the truck often sells out of everything. The Cap’n Crunch tilapia burritos go first.

Inside the burrito are two enormous filets of tilapia, “breaded” and flash-fried like a Japanese katsu. However, this “bread” is mostly composed of Cap’n Crunch cereal, giving it a kick of sweetness (and the potential to invoke flashbacks to childhood).

A spicy Sriracha mayonnaise was spread thick amid red cabbage, lettuce, and tomato. Although the tortilla was unremarkable, it didn’t distract from the flavors, and it held together the flaky fish and oodles of sauce. The heavy dose of mayonnaise may be better suited to an undergrad’s stomach of steel than my aging belly, but anything doused in a sauce this tasty is obligated to taste good.

Do yourself a favor and order the peanuts, which are infused with lime and chili, and topped with garlicky crunch. Order the sickly sweet Thai iced tea only if you plan to save room for dessert. 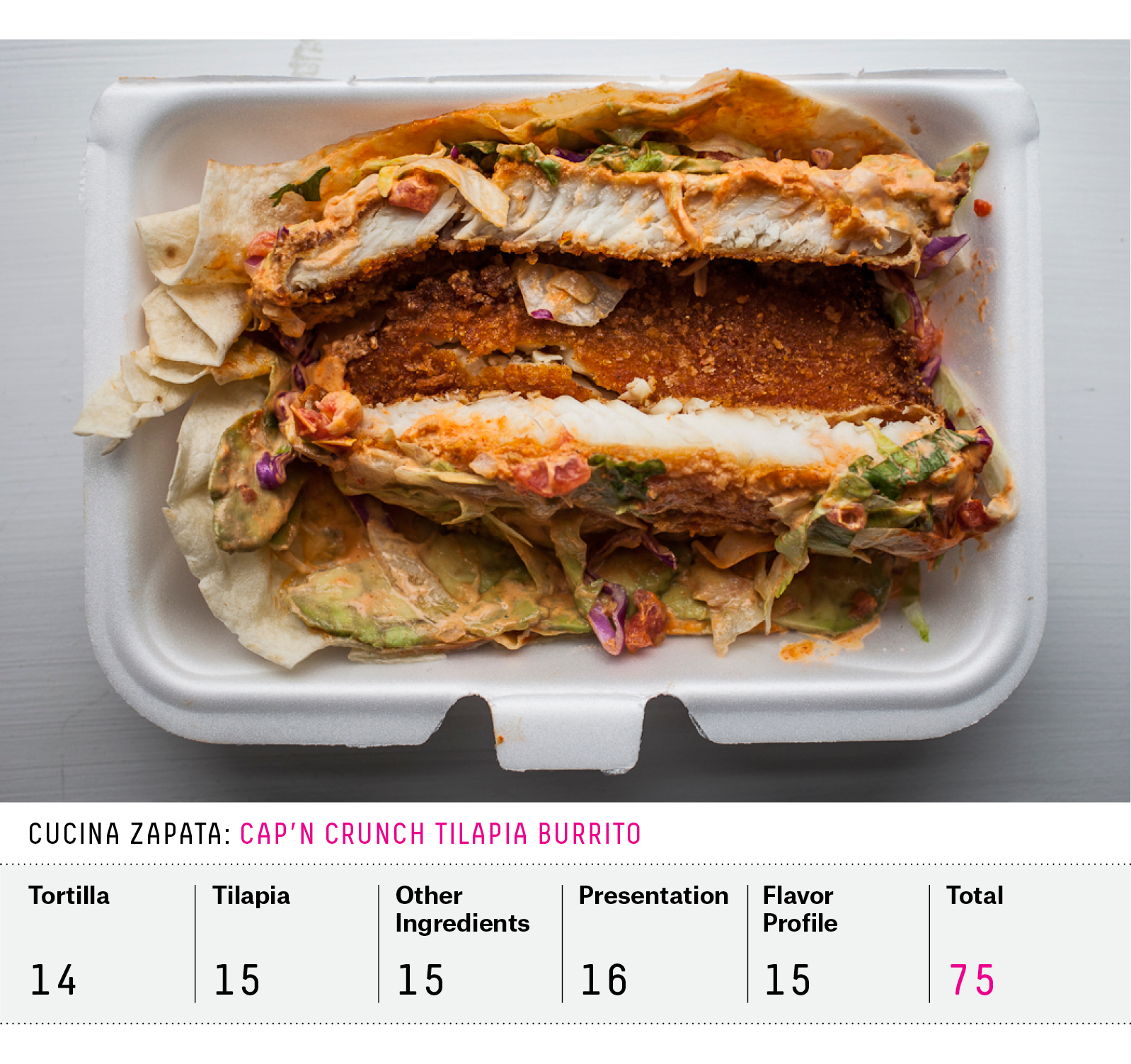 Despite the puzzling service and tough competition from Tortacos, Pancho’s and its corn tortillas will be heading to the next round.