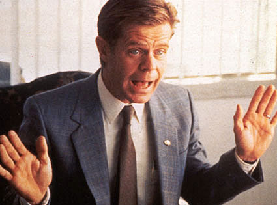 Minnesota Governor Tim Pawlenty has thus far refused to sign an election certificate which would verify Al Franken as the winner of that state’s Senate contest last November. For the time being, Pawlenty remains on reasonably firm ground, with Norm Coleman having appealed an election panel’s ruling that declared Franken the winner to the state Supreme Court, a process which will take until at least June to resolve. With Republicans, however, seemingly being increasingly inclined to wait out a Coleman appeal not just to the state Supreme Court, but also to the U.S. Supreme Court, Pawlenty may face conflicts between what’s best for the Republicans, and what’s best for his own political future.

Arguably, in fact, the Franken affair is already impairing Pawlenty’s political fortunes. According to polling from SurveyUSA, Pawlenty’s popularity has suffered significantly since the November election, and he now has a net-negative approval rating, with 50 percent of Minnesotans disapproving of his performance and 46 percent approving. The Star Tribune has also found Pawlenty’s approval to have declined to 48 percent — against 36 percent disapproving — the lowest figure it has tested, while polling from Public Policy Polling last month found just 46 percent approving of Pawlenty’s performance (against 40 percent disapproval) and that some three-fifths of Minnesotans think he should certify Franken. 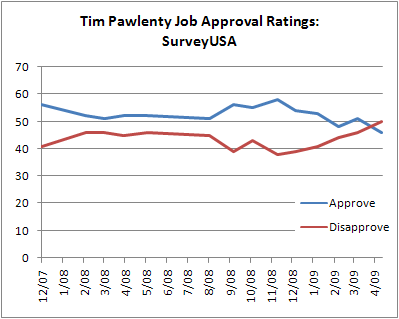 It is hard to know whether the decline in Pawlenty’s approval is owing to the results of the Senate contest itself. Minnesota, like most states, is currently facing a budget crisis, and this is a rough time for governors in general.

What seems reasonably clear, however, is that Pawlenty does not have a whole heck of a lot of political capital to spare. It is intrinsically difficult to be a Republican in Minnesota, and his re-election bid in 2010 may already be in danger. If he is seen as dragging out the contest and carrying water for the national Republicans once the state Supreme Court rules, he may get himself in even more trouble.

One can imagine that Republicans are trying to placate Pawlenty through vague promises of support for his much-rumored Presidential aspirations in 2012. But is hard to know how credible such promises might be. Pawlenty lacks both the name-brand and the institutional infrastructure of candidates like Sarah Palin, Mitt Romney or Mike Huckabee, and he is certainly unlikely to become the Republican nominee if he loses Minnesota’s governorship in 2010. Moreover, Pawlenty was already “used” by the national Republicans at least once — back in August when he was the decoy for the rollout of Palin as their VP selection.

There is another way, of course, for the Republicans to prevent Franken from being seated: they can try and filibuster him. But then it would be John Cornyn and Mitch McConnell’s hides on the line, and not Pawlenty’s. The whole thing is increasingly starting to resemble the Coen brothers film Fargo, with Pawlenty and Cornyn playing Carl Schowalter and Gaear Grimsrud to Coleman’s Jerry Lundegaard.