Craft beer is also small. As a group, craft breweries still comprise only about 8 to 14 percent of the overall beer market. And being small is a point of pride — it’s part of the craft brewery definition. You can’t be craft if you make more than 6 million barrels of beer a year (Budweiser brews about 40 million barrels a year). Even if a brewery sticks a craft-looking label on the bottle (think Third Shift, which is actually a front for Coors), it doesn’t make it craft. Its parent company is still too big.

Except, maybe, for Samuel Adams. Jim Koch started his Boston Beer Company and Samuel Adams in 1984, pitching it as a flavorful antidote to a watery beer scene. Along the way Boston Beer Company grew into a $2.9 billion company. But now flavor is everywhere, as are other upstarts that pitch their beers as more bold, artisanal and authentic than Sam Adams.

The company is trying to combat this narrative, recognizing that it’s stuck between the small and the big. No matter how craft fads come and go, a recent television ad implies, Sam Adams is forever.

All that’s at stake is whether Sam Adams can take advantage of the major change in the way we drink, and the brewery’s place in American beer history. Koch often refers to his beer company as the “tallest pygmy,” and its sales, relative to the largest beer companies and the largest craft breweries, tell the same tale. Look at the biggest Big Beer, and Sam Adams is still very small. Look at the biggest craft breweries, however, and Sam Adams looks like a behemoth.

Tony Magee, the head brewer at Lagunitas Brewing, in Petaluma, California, said that the Brewers Association definition was artificial and that craft beer “is like pornography — you know it when you see it.” When Magee looks at a bottle of Sam Adams, he doesn’t see anything obscene.

Magee argued that modern American craft beer is about innovation. Freed from the shackles of tradition — the German Reinheitsgebot, or beer purity law, bars flavor additions from anything called beer in Germany — brewers have tried all sorts of flavors in their beer. Peanut butter, strawberries, coffee, coffee once-ingested by small mammals — all are fair game in today’s beer. Today’s beers are also crossing styles (Chain Breaker White IPA by Deschutes is a Belgian IPA), blending sours (Almanac’s Sour Porter) and emphasizing freshness (Stone’s Enjoy By series).

Magee said that Sam Adams has “so little to do with what beer is doing today.” In other words, Sam Adams may have once been craft, but its size and lack of innovation mean it can no longer qualify.

Unsurprisingly, Koch sees things differently. “We have been innovating and pushing boundaries for 30 years and that will never stop,” he wrote in an email. “Samuel Adams was one of the first breweries to introduce seasonal beers,” he continued, also pointing out that his brewery “pioneered the concept of aging beer in spirit barrels, a now-common practice that was nearly unheard-of when we released our first extreme beer, Triple Bock” in 1997. (Many experts consider Goose Island’s flagship Bourbon County Brand Stout, which debuted on draft in 1992, the first whiskey-barrel-aged beer.)

Regardless, Sam Adams wants you to know it’s still innovating.

The newest Sam Adams beer, a “West Coast” IPA called Rebel IPA, jumps into the same debate about innovation and what craft beer is all about. On its website, the company writes, “30 years later, we’re still brewing for the craft beer revolution with our latest release, Rebel IPA.” 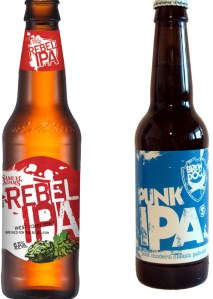 But there’s also the question of authenticity. Back when Koch was selling beer door to door, it was his family’s recipe. Now, one look at the case for the new Rebel IPA quickly brings into focus how far from the norm this beer is for Sam Adams. The packaging looks a lot more like BrewDog’s Punk IPA, a craft industry stalwart.

Is Sam Adams’s attempt to recover some of the craft beer cachet working? I help run a site called BeerGraphs, which tabulates data about a beer’s quality relative to others in its class. Using Untappd, an app that allows beer enthusiasts to check in, rate and socialize around their beer choices, BeerGraphs creates beer and brewery rankings. One blanket caveat before we get into Sam Adams’ numbers: Because Untappd requires the user to download an app and want to tell all their friends what beers they’re drinking, it has a slight pro-craft bias. You can see it in the app’s most popular beers, which put Lagunitas IPA ahead of Budweiser. In this case, that’s helpful, since we want to know what the craft crowd thinks of Sam Adams’s offerings.

It doesn’t look like Rebel IPA is gaining steam. In fact, its average score has dropped closer to 3.0 out of 5.0 since March. That’s not a decent score. According to BeerGraphs’ Beers Above Replacement metric (which accounts for differences between styles and adds some credit for popularity)  it’s a -0.27 BAR. American India Pale Ale is a crowded category — especially at the top — but since 70 percent of the entrants have a score over 3.56, Rebel IPA is a sub-replacement beer.

And craft beer lovers don’t seem to consider Sam Adams a quality craft brewery — by BAR, it rates 571st out of 2673 breweries listed.1

Koch pointed out that Sam Adams comprises just 1 percent of the total beer market. “It took us 30 years to get there, and I am proud of our 1 percent!” he said. But just by advertising on national television, Sam Adams has separated itself from 99 percent of craft breweries. The content of those advertisements and the issues they raise, together with the ratings of craft beer lovers, show us that Sam Adams is caught betwixt and between. It started a craft beer revolution, and then craft beer’s evolution passed it by.

CORRECTION (June 22, 12:55 p.m.): The chart in this article has been updated to better represent the data.

CORRECTION (June 23, 6:08 p.m.): The article has been updated to reflect that beer brewed with civets are mammals, not rodents. There was also an error that listed Rebel IPA as an Imperial Pale Ale. It is an India Pale Ale.

Eno Sarris writes for FanGraphs about baseball stats and started BeerGraphs to do the same for beer. @enosarris