It’s a bit hard to assess where we are in the health care debate. On the one hand, the Democrats pushed through and passed a bill in the late hours of Saturday evening, clearing a hurdle that meaningful health care reform has never before cleared. On the other hand, the vote in the House perilously close, there were new complications introduced by the Stupak amendment, and the bad jobs numbers and arguably the outcomes of the elections last Tuesday Virginia and New Jersey last will give nervous lawmakers plenty to worry about.

One leading indicator of the prospects for health care reform so far has been the performance of the half-dozen or so publicly-traded health insurance company stocks. Favorable developments for health care reform have been met with decreases in the prices of these stocks, and unfavorable developments with improved valuations. So what’s happened to these stocks since market close on Friday — before the House passed its health care bill?

Well, not much. Actually, that’s not true: they’ve gained an average of 1.8 percent so far, weighted for market capitalization. But the S&P 500 has gained 2.1 percent over the same day-and-a-half of trading, meaning that the performance of the health insurance stocks is right on par with the market. The news has not been good or bad so much as indifferent — which feels, intuitively to me, like about the right assessment. 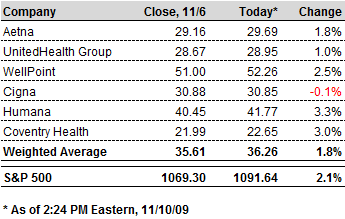 Interestingly, the markets had a much less ambiguous assessment of the elections, with health insurance stocks gaining an average of 3.7 percent over the course of the day on Wednesday while the S&P — after a volatile session — was basically unchanged: 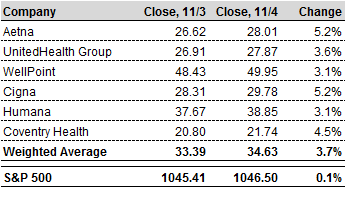 I don’t necessarily think that the stock market is particularly adept at forecasting political risk, but to the extent that you’re looking for an objective assessment of the consequences of lats week’s results for the Democratic agenda, this is a pretty decent one.