Michigan and Wisconsin have been the focus of a lot of attention from nervous Democrats for the past four years, in part because Hillary Clinton spent relatively little time there and lost both states in 2016. So if you told Democrats that Joe Biden would be up by 7 points in Wisconsin and 8 points in Michigan in polls with a week to go, they’d feel …

Actually, who are we kidding? They’d still feel pretty nervous since the polls underestimated Donald Trump in these states four years ago! With that said, one key observation is that Biden could withstand 2016-style polling errors in those states and still win. (Clinton led by 4 points in Michigan and 5 points in Wisconsin in our final polling averages in those states in 2016, and then lost both states by less than one point. But Biden’s extra cushion means he could survive a 2016-magnitude miss.)

The polls have been tighter in Pennsylvania, though. Biden’s current lead is just 5.1 points, and in 2016, polls were off by 4.4 points in the Keystone State — Trump won it by 0.7 points after trailing in our final polling average by 3.7 points there. So with a 2016-style polling error in Pennsylvania, Biden would be cutting it awfully close, perhaps even so close that court rulings on factors like “naked ballots” could swing the outcome.

Whether it makes sense that Biden is polling worse in Pennsylvania than in Michigan and Wisconsin is a fair question. Biden was born in Scranton, and it’s the most urban and racially diverse of the three states. Still, Wisconsin and Michigan are traditionally more Democratic; Barack Obama won them by larger margins than Pennsylvania in 2012, for instance. So maybe there’s been some reversion to the mean here. In any event, the polling has been consistent enough in showing Pennsylvania tighter than Michigan and Wisconsin that we probably need to take it at face value at this stage.

So here’s a question we can ask with our nifty scenario generator. Is Pennsylvania a must-win for Biden?

No, not quite. It is close to being a must-win for Trump, who has only a 2 percent chance of winning the Electoral College if he loses Pennsylvania. Biden, however, has a bit more margin for error. He’d have a 30 percent chance if he lost Pennsylvania, which isn’t great but is also higher than, say, Trump’s overall chances on Election Day 2016. 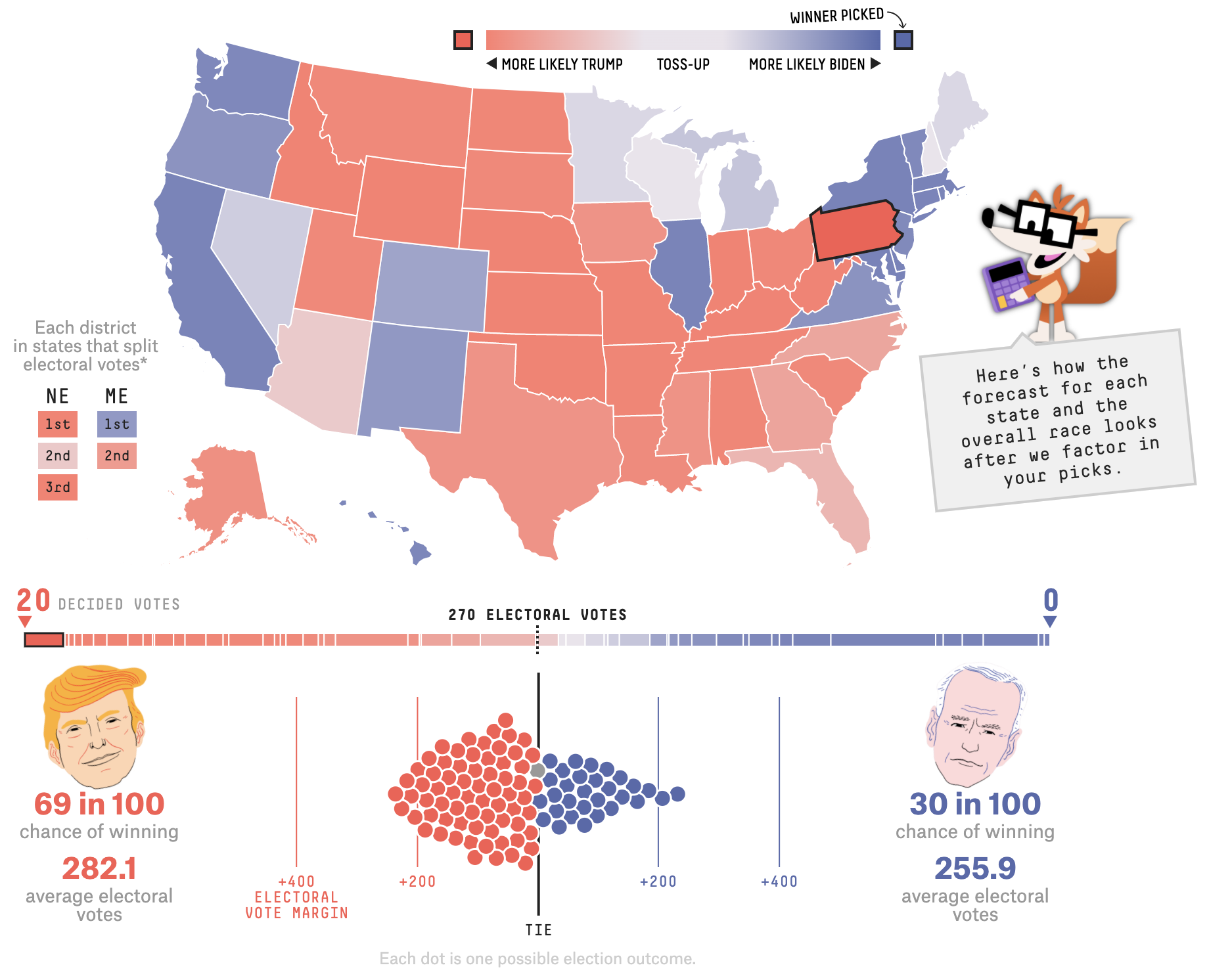 The reason losing Pennsylvania wouldn’t necessarily doom Biden is because he could still hold those other Midwestern/Rust Belt states. Pennsylvania is fairly similar to Michigan and Wisconsin, but not that similar. As I mentioned, it’s denser and more racially diverse. It may or may not be in the Midwest. It’s traditionally a bit more purple. So if Biden is doing better than Clinton with rural whites but worse with Black voters — as a lot of polling shows — he might gain ground in Wisconsin but lose in Pennsylvania.

Say, then, that Biden loses Pennsylvania but wins Michigan and Wisconsin. For good measure, we’ll also give Minnesota to Biden. What do his chances look like then? Biden’s actually a slight favorite (55 percent) in this scenario. 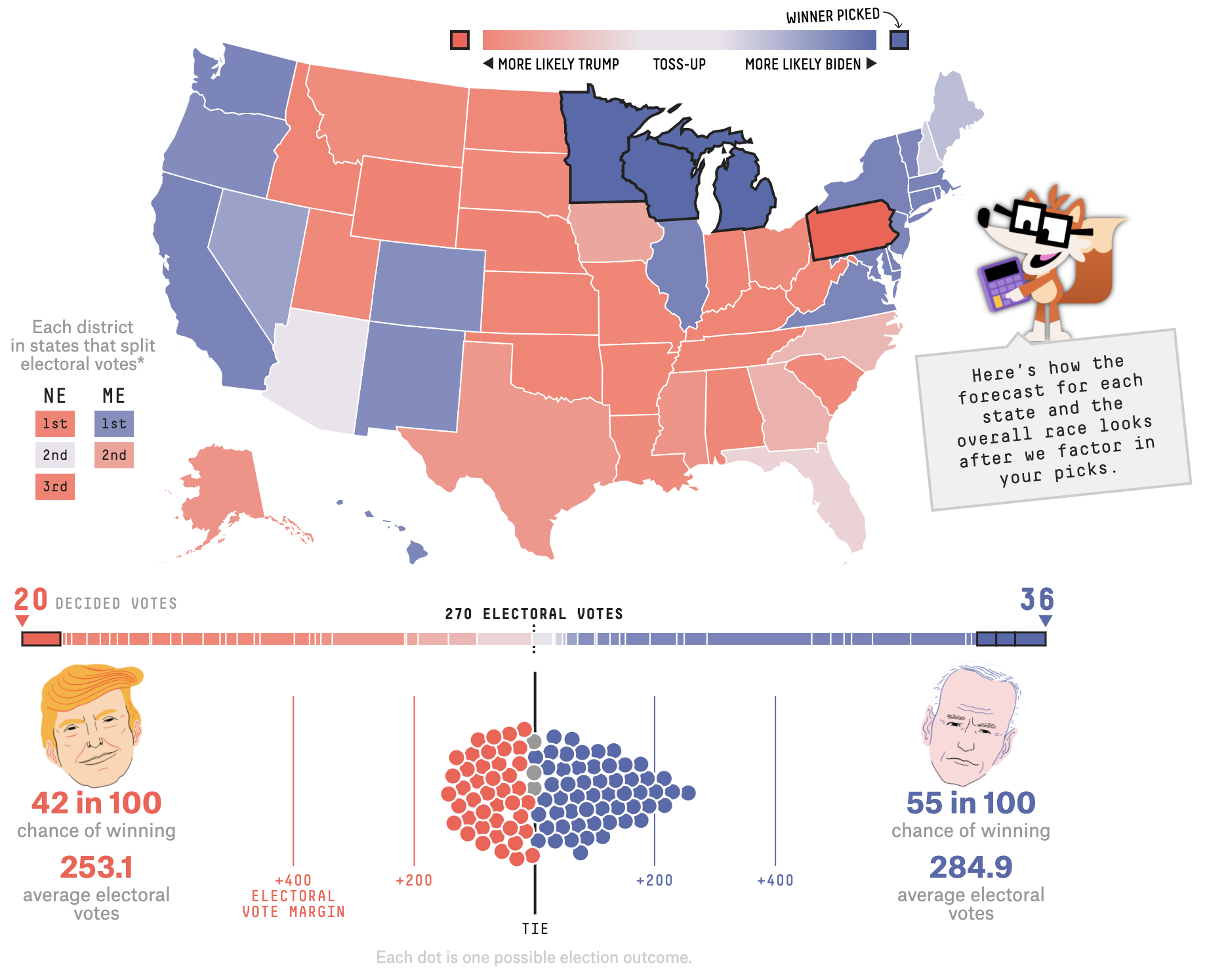 This map has a lot of interesting aspects that give you some hints about how our model works behind the scenes. Here, for instance, are Biden’s chances of winning other swing states if he loses Pennsylvania but wins the other three Midwestern states:

The biggest decline to Biden’s chances comes in Ohio. That makes sense. It’s not an easy state for him to win anyway, and it should be highly correlated with Pennsylvania, so if he can’t win in Pennsylvania, it’s very hard to imagine him winning there. Iowa is a bit more viable for Biden because it’s more similar to Wisconsin and Minnesota than to Pennsylvania, but it would still be a long shot.

The model also thinks New Hampshire and Maine could be problems for Biden if he loses Pennsylvania, although he’d still be favored in those states. Demographically, Maine is more similar to Wisconsin than it is to Pennsylvania — it’s white and rural. But geographically, it’s closer to Pennsylvania. Our model considers both factors, as geography can often be a proxy for lots of hidden factors that cause correlated outcomes between states but are otherwise hard to detect.

Conversely, what happens in the Rust Belt doesn’t tell us much about what will happen in Nevada, Colorado or New Mexico — those groups of states just aren’t that similar.

Biden’s chances would decline in Florida, Arizona, North Carolina, Georgia and Texas, however. Part of that is because these states just aren’t that easy for a Democrat to win, period. So if Biden is having a mixed night — as evidenced by his losing Pennsylvania even if he wins Wisconsin and Michigan — they could be fairly heavy lifts.

Still, Biden would be slightly favored to eke out a win in this scenario by winning one more of those Sunbelt states. The most likely would be Arizona, which has less in common with Pennsylvania than the others.

Biden’s work wouldn’t quite be done if he won Arizona, though. Rather, his chances would be 85 percent, with a 5 percent chance of a 269-269 tie. But he’d be in pretty good shape. He could hold the other states Clinton won in 2016 and then flip either Iowa or a congressional district in either Maine or Nebraska, which award one electoral vote each. Alternatively, he could even lose another state Clinton won, like Maine or New Hampshire, if he carried a second Sunbelt state such as Georgia.

We’re getting into the weeds. But here’s the thing: Yes, Biden and Democrats should be nervous that he has only about a 5-point lead in Pennsylvania, the most likely tipping point state. Five points is more than a normal-sized polling error, but not that much more. And Biden does have some backup plans. A regional polling error in the Midwest or the Northeast wouldn’t necessarily doom his chances in states like Arizona, for instance. It wouldn’t be the blowout that Democrats hope for, but Biden would still retain an edge in the Electoral College even without winning his birth state.

Nate Silver on how 6 key states could impact election results