Places with large populations of college students are notorious for strained “town-gown” relations brought on, at least in part, by the often vast gulf between wealthy students and less well-to-do locals. Think of Yale University, a fantastically rich institution in the middle of New Haven, Conn., one of the country’s poorest cities. So it might not be surprising that many college towns featured prominently on a recently published Bloomberg list of the U.S. cities with the highest levels of income inequality.

Except they aren’t, or at least not in the way most people think of income inequality. College towns don’t rank high in inequality because they’re full of rich students. In fact, it’s the opposite: They rank high because, according to the government’s definitions, most students have very little income, even if they come from rich families. Take out all those “low-income” students and college towns are actually slightly more equal than average.

To understand why published inequality figures aren’t very useful for college towns, it helps to understand how the U.S. Census Bureau defines household income. Or, more to the point, how it defines “household” and “income.” Both are simple concepts in theory but difficult to measure in practice. And college students happen to fall into the gray areas on both.

Start with “household.” The government collects income data at the individual level, but that isn’t very useful for most inequality discussions. After all, the housewife of a wealthy surgeon might have not have any income of her own, but she shouldn’t be counted as poor. So when measuring inequality, the Census Bureau focuses on households, which basically means anyone living together. 1

Defining “household” can get tricky when it comes to college students, however, since many of them are living separately from their parents but still rely on them for financial support.2 As far as the Census Bureau is concerned, college students aren’t part of their parents’ households unless they’re still living at home. If they’re living off campus with roommates, then they and their roommates count as their own household. If they live on campus in the dorms, then they fall under a totally separate category — “group quarters” — which basically means they don’t count at all in household income calculations.

Take Columbia, Mo., home to the flagship campus of the University of Missouri. Using data from the American Community Survey, I estimate there are about 22,000 undergraduates in Columbia and the surrounding Boone County,3 which is about 13 percent of the total population.4 But students account for about 6 percent of Boone County’s households. (A third of students live on campus — and are therefore not counted as households — and many of the rest live with roommates who are also college students.)

Six percent may not sound like much, but it��s far above the national average: Just 0.6 percent of U.S. households are made up entirely of students.5

Now let’s look at “income.” The Census Bureau uses a pretty broad definition of income that includes things like scholarships, Pell Grants and financial support from friends and relatives. But it excludes one of the most important sources of cash for many college students: loans. Moreover, researchers have long known that people tend to underreport non-wage income, like scholarships, something the bureau actually notes in its official report on household income. Put it all together and most students don’t have much reported income. In Columbia, the average income for non-students is about $25,000. For students, it’s just $4,200.

Having a lot of students, then, tends to drag down a city’s median income, at least the way the Census Bureau measures it. And the impact can be pretty significant. Boone County’s median household income was $43,600 in 2012,6 well below the national mark of about $50,000. Take away student-only households, however, and the area’s median income increases 10 percent to $48,000.7

Columbia isn’t unusual. Among communities where college students make up at least 10 percent of the population, median household income would be 6 percent higher on average if student households were excluded. In some cases the difference is much bigger. In Gainesville, Fla., home to the University of Florida, the median household income jumps 25 percent, from $28,000 to $35,000, when students are excluded. The table below shows the 20 college towns where excluding students changes median incomes the most.8 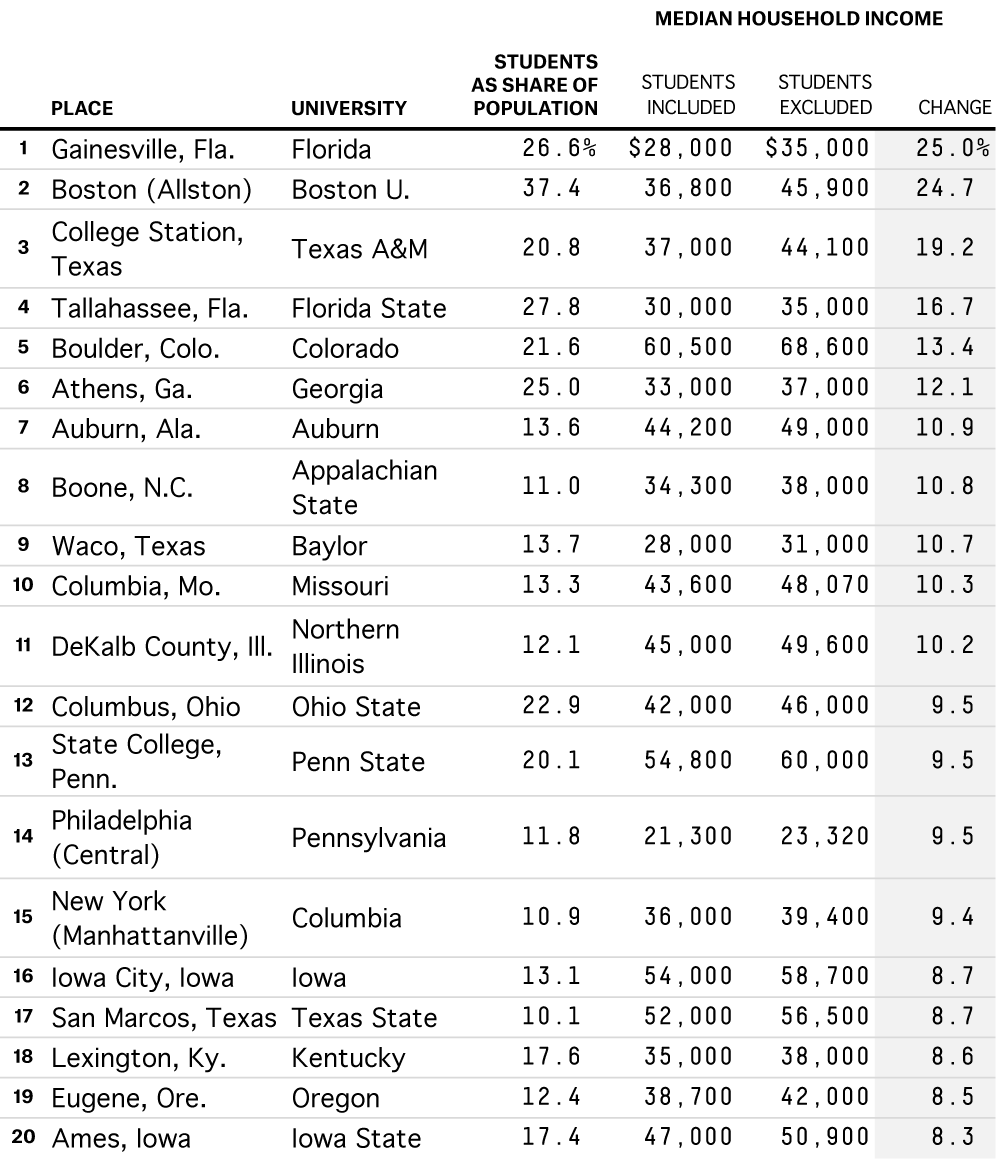 Unsurprisingly, all those low-income students have a big impact on measures of income inequality. The most widely cited figure, the Gini coefficient, measures how income is distributed on a scale of 0 to 1. Zero is perfect equality: Everyone has the same income. One is perfect inequality: One household has all the money. The national Gini coefficient was 0.477 in 2012, but there’s quite a bit of variation across regions. In 2012, the Census Bureau published county-level Gini coefficients, which ranged from .207 to 0.645.

College towns, as Gawker noted, are overrepresented among the list of the most unequal cities as measured by their Gini coefficients. But take out their college students and things look very different; in fact, a somewhat rough calculation of local-level Gini coefficients suggests that college towns go from being slightly more unequal than average to slightly more equal when student households are excluded.9 In some cases, the shift is big: Out of the more than 2,200 places where we have American Community Survey data, Boone County ranks as the 309th most unequal. Exclude student households, however, and it falls to 500th. Centre County, Pa., home to Pennsylvania State University, falls more than 800 places, from No. 652 to No. 1,485.10

None of this means college towns aren’t “pits of inequality.” They just aren’t pits of income inequality. College towns are full of students with little income but plenty of cash, or with expensive stuff bought with their parents’ cash. They’re also full of service workers, adjunct faculty and students from less affluent backgrounds who have to watch every penny. That’s a concept economists refer to as “consumption inequality.” Similarly, many students come from families with lots of wealth — in the form of savings accounts, investments, and real estate — which gives them a safety net that others in the community (students and non-students alike) don’t enjoy. That’s what economists call “wealth inequality.”

All three concepts matter, but you have to know what you’re measuring — and how definitional details can skew the results.