In 1997, World Champion Garry Kasparov lost a chess match, and humanity’s intellectual mantle along with it, to IBM’s Deep Blue supercomputer. (My colleagues recently made a film about the match — it debuts Wednesday.)

This weekend, I played Words With Friends against my iPhone, and reclaimed it.

The game company Zynga recently released a new version of its popular, Scrabble-esque Words With Friends. It’s called — drumroll — New Words With Friends. It contains new features and a refreshed design. One handy new feature for the data nerds is expanded personal stats. For example, I have 455 Words With Friends games in my own history. If all the tiny digital tiles I’ve played were real, and laid end to end, they’d span 22,450 feet, the app tells me — more than 4 miles.

The most notable new feature, though, is Solo Play. You no longer need friends to play Words With Friends. You can play the app’s A.I. anytime, even when offline — on an airplane, for instance. (In order, apparently, to act more like a human friend, the A.I. takes its sweet time — 2 minutes — between moves.)

A good-not-great tournament Scrabble player myself — I peaked at 223rd in the country — I sat down to put Solo Play to the quantitative and qualitative test. I hereby swear not to have cheated, or used any outside aids whatsoever — the contest was simply gray matter versus silicon. I had, by construction, no friends present to corroborate this, so you’ll have to take my word for it. (One piece of potent social commentary: A Google search for “Words With Friends” returned three separate cheating aids on the first page of results.)

I played Solo Play in a six-game match, just like the Kasparov-Deep Blue encounter.

Really, it shouldn’t be hard for Solo Play to crush me. Obviously, the app knows all the words, and the computer that powers it — my iPhone 6 — is actually many times faster even than Deep Blue was. The 259th-fastest supercomputer in the world in 1997, Deep Blue clocked in at 11.4 gigaflops. The iPhone 6’s A8 chip does 115.

But it did not.

Game 1 was a shootout. I opened with the bingo SINGLES. (A “bingo” is using all seven of your tiles in a turn, earning bonus points in the process.) Solo Play followed suit with its own GIMLETED, then ULTRAIST, striking fear into my heart. Heavy with (but energized by) the weight of my species’ very reputation (and bailed out at one point by the Words With Friends-only two-letter word DI), I eked out a 410-391 nail-biter.

Game 2 started with a bang. After exchanging three tiles, I drew blanks on consecutive turns, slapping down DEWCLAW and GODLIER. (Full disclosure: Before playing the latter bingo, I attempted GRODIER. It’s Scrabble-valid, but apparently Word With Friends-verboten. I also tried ROOTLING on the following turn. Same deal.) I tacked on UNPILING a few turns later. Humanity cruised to a 445-354 win.

Game 3: Humanity is on the brink of glory! Solo Play scored big with an opening BEAGLES, but I was set up perfectly for a 98-point GOODISH, and got a cheap 74 points for a well-placed KETO. Final score: 455-331.

In Game 4, I opened with another exchange of tiles, and was lucky to draw great letters. Solo Play’s questionable opening placement of MOKE, one spot short of a double-word score, allowed me to get down SIENNAS (making MOKES) for 81, and it was off to the races. (Solo Play did score some major style points with SUBECHO, played through a disconnected S and BE, but it wasn’t enough.) I then pulled away with MASTHEAD. In the end, it was annihilation: 461-292 good guys, and one giant leap for mankind. The deciding board is pictured below: 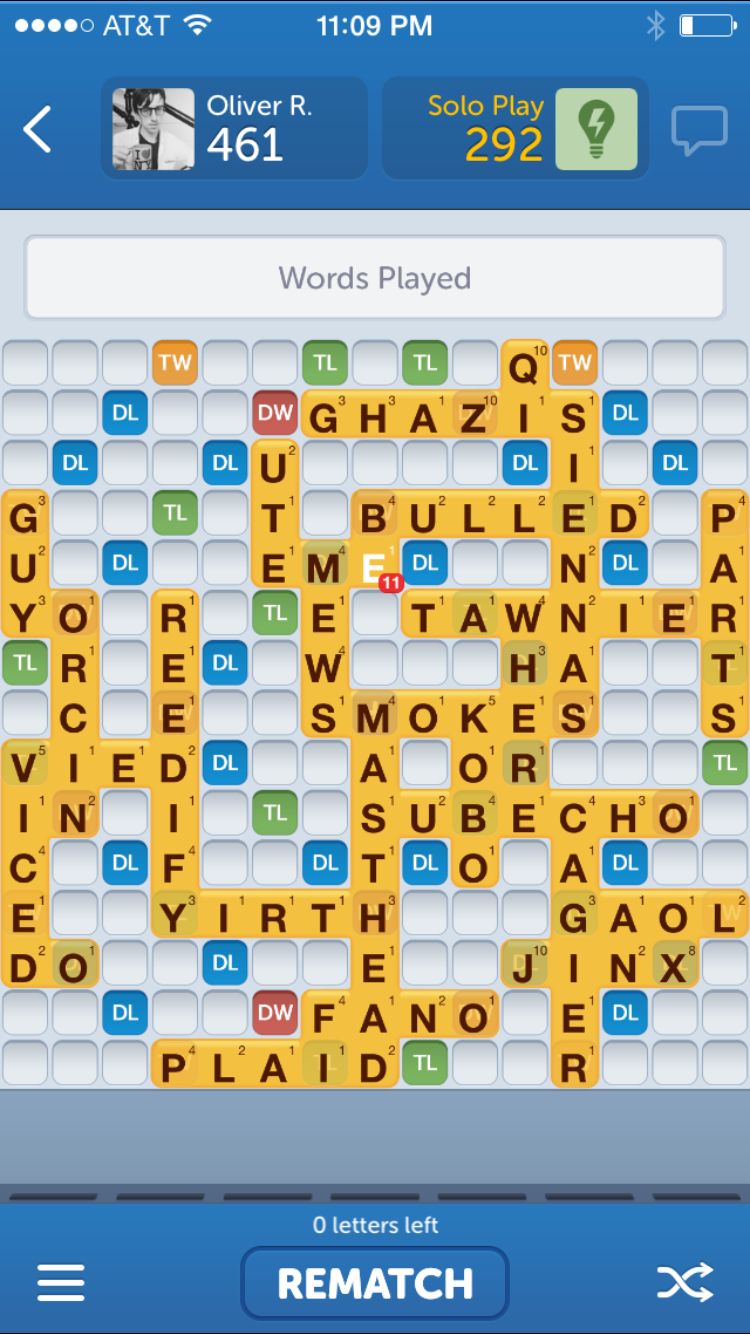 Games 5 and 6 were, of course, mere formalities, man having already clinched victory over machine. But Solo Play continued to play fast and loose with its tile placement, allowing me get a cheapo 126 points for JUTS in one game, for example. Solo Play’s one bright spot was the nice bingo ETHICIAN. I chalked up the bingos OUTEATS and LINEATED. A 507-321 blowout and a 429-358 yawner and the A.I.’s goose was cooked. The built-in two-minute waits couldn’t pass quickly enough for me to put the app out of its misery.

Solo Play is meant to adjust its playing ability to a player’s history. However, it bested my lifetime scoring average only once in our six games, and barely at that. Solo Play averaged a pretty middling 341 points per game, while I averaged 451. So, while it seems unable to challenge highly skilled players, it may challenge up-and-comers.

My main tip: Value your blanks and S’s! Even though their face values are small — zero points and 1 point, respectively — true values are much higher because of the variety of words you can make with them. Scrabble experts have calculated that an S is worth roughly 8 points, and a blank roughly 26. Save them for the high-scoring plays they deserve. These figures may be even higher in Words With Friends, especially since Solo Play had a tendency to create prime scoring spots, ripe for a well-placed S.

Words With Friends, of course, is different from Scrabble — certain tiles are worth more or fewer points, bingos are worth a 35-point bonus rather than 50, and the letter distribution is a bit rearranged. The lexicon is a bit different as well.1 But the deep tactics, strategies and skills required are still fully present, if slightly altered. Zynga even sells physical versions of the game. Strategically, because of the value of its tiles and the placement of its bonus squares, Words With Friends seems to emphasize defensive, positional play. Its Solo Play A.I. seems not to comprehend that — at least not yet.