We’re now almost 50 days into Barack Obama’s first term, and I thought it might be instructive to compare his Gallup approval rating to that of other Presidents roughly 50 days into their respective terms: 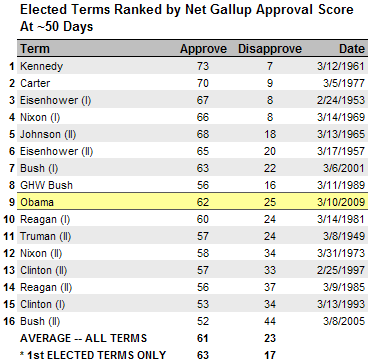 Obama’s standing with the public — 62 percent approve of his performance and 22 percent disapprove, according to Gallup, is objectively quite good. But presidential approval scores are usually quite good at this early point in their terms. Since World War II, the average of all presidential approval ratings through about 50 days in their terms is 61 percent approve and 23 percent disapprove. Moreover, if we limit the analysis to those presidents in their first elected terms — we include Truman in ’49 and Johnson in ’65 in this category — the average has in fact been slightly stronger than that.

Then again, Obama has a couple of pretty good excuses if his approval ratings aren’t quite in Kennedy territory.

For one, the public has tended to become more partisan over the course of the past half-century, and so it has been harder to sustain stratospheric approval ratings. Since Reagan, the average president (not counting Obama) has had a score of 57 percent approve, 30 percent disapprove through this point in his term — slightly weaker than Obama’s. If we exclude the second terms of Reagan, Clinton and Bush, the scores are 58 percent approve, 24 percent disapprove. 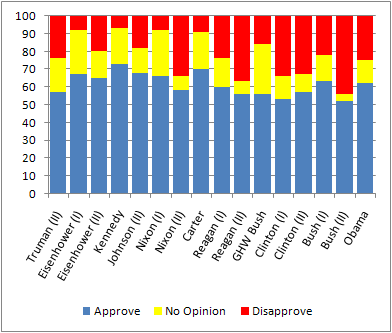 And secondly, no president since Truman, and no newly-elected president since Roosevelt (whose first term, alas, came before Gallup had begun taking approval ratings), has had to take over under such difficult circumstances. It’s not just your imagination if it seems like Obama has been in office for 500 days rather than 50 — he hasn’t had the advantage of a running start. So while we should be realistic about the fact that Obama isn’t quite carrying an LBJ-type mandate at the moment, his approval ratings are almost exactly where Ronald Reagan’s were at this point in 1981, which is probably the most comparable circumstance — a “change” election amidst cloudy economic circumstances (although Reagan was technically in between recessions at this point).

This is not to say that everything has been foolproof. Far from it. The administration, I’m guessing, if it had to do it over again, would not have taken two weeks off and tried to let Nancy Pelosi sell the stimulus. It would not have overpromised on what Tim Geithner was going to be able to deliver, and it would have looked up Zoë Baird’s name on Wikipedia and recognized that there are certain bugaboos when it comes to cabinet nominations that it isn’t worth fighting uphill against.

But for me — and yes, I know, I drunk the kool-aid a long time ago — there’s still nobody that I’d rather have in office right now. A large fraction of the country evidently feels the same way.