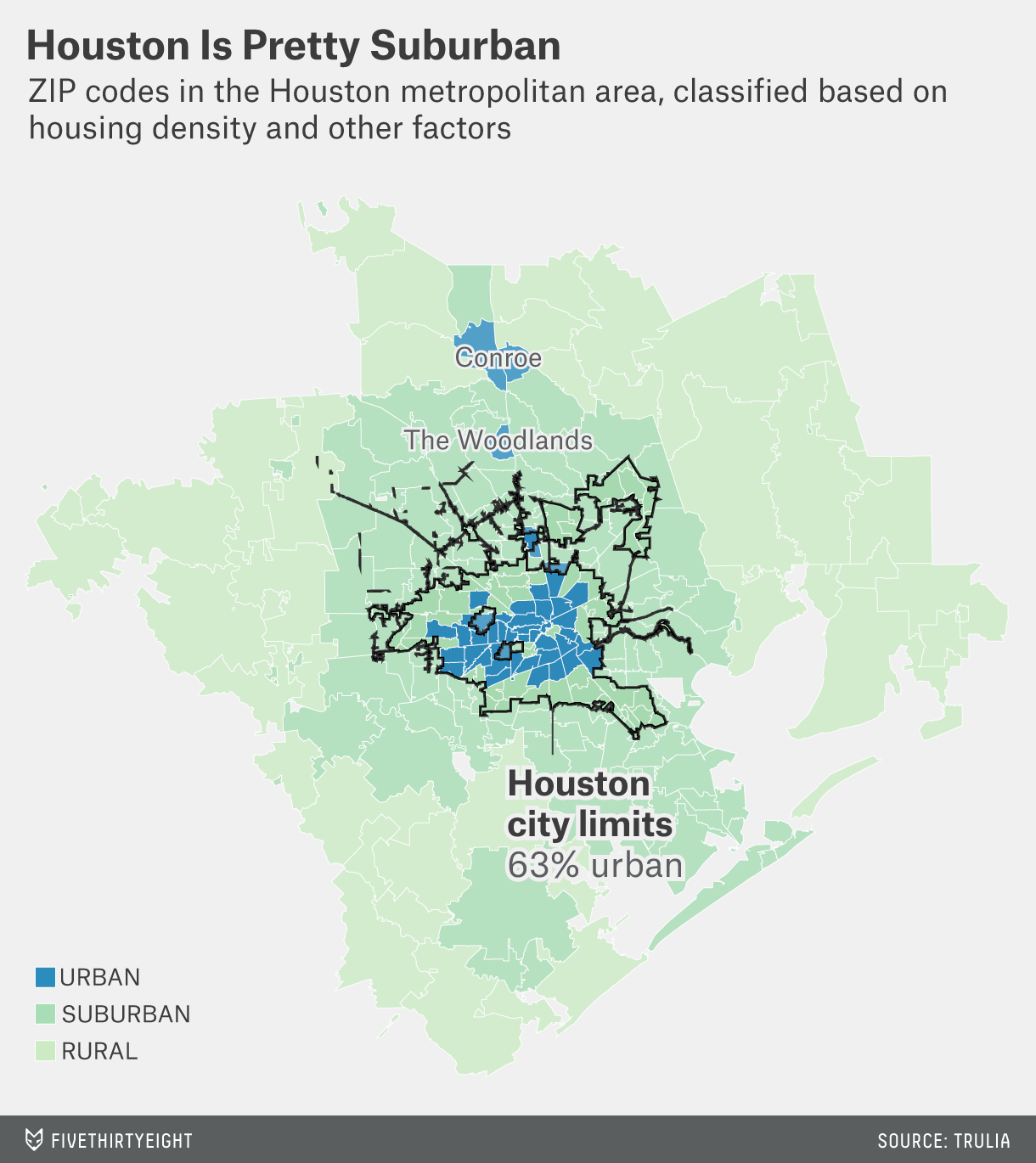 What, exactly, is a city? Technically, cities are legal designations that, under state laws, have specific public powers and functions. But many of the largest American cities — especially in the South and West — don’t feel like cities, at least not in the high-rise-and-subways, “Sesame Street” sense. Large swaths of many big cities are residential neighborhoods of single-family homes, as car-dependent as any suburb.

Cities like Austin and Fort Worth in Texas and Charlotte, North Carolina, are big and growing quickly, but largely suburban. According to Census Bureau data released Thursday, the population of the country’s biggest cities (the 34 with at least 500,000 residents) grew 0.99 percent in 2014 — versus 0.88 percent for all metropolitan areas and 0.75 percent for the U.S. overall. But city growth isn’t the same as urban growth. Three cities of the largest 10 are more suburban than urban, based on our analysis of how people describe the neighborhoods where they live. 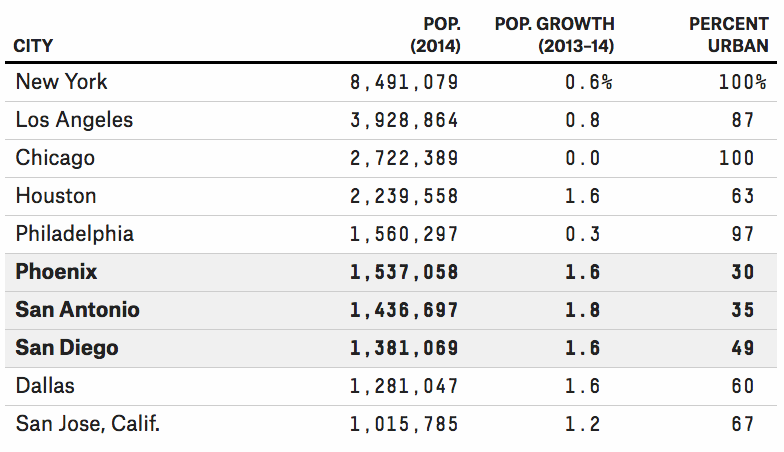 Official government data obscures how suburban America really is. There’s no definition of “suburb” or “suburban” in the census’s otherwise exhaustive list of geographic terms and concepts. The census definition of urban areas amounts to the 81 percent of the U.S. population that is not rural, but this definition, as we’ll see below, lumps together urban and suburban neighborhoods.

Researchers and official data sources sometimes treat the portion of a metropolitan area outside its largest city or cities as the suburbs, but this gets many neighborhoods wrong in both directions. Just as big cities contain neighborhoods that feel suburban, some areas outside big-city boundaries — such as Hoboken, New Jersey, and West Hollywood, California — feel more urban than parts of their neighboring big cities.

To develop a standard definition of suburban that reflects what residents experience, the online real estate site Trulia, where I am the chief economist, surveyed 2,008 adults from across the U.S. We asked them to describe where they live as urban, suburban or rural, and we purposely did not define these terms for them.1 We also had each respondent’s ZIP code, which we used to identify his or her city, metropolitan area and state of residence. For this research, we treated ZIP codes as neighborhoods even though many ZIP codes encompass more area than what people may think of as a neighborhood.

It turns out that many cities’ legal boundaries line up poorly with what local residents perceive as urban. Nationally, 26 percent of Americans described where they live as urban, 53 percent said suburban and 21 percent said rural. (This comes close to the census estimate that 81 percent of the population is urban if “urban” is understood to include suburban areas.) Within “principal cities” of metropolitan areas (the census designates one or more cities in each metro as “principal”), respondents split 47 percent urban, 46 percent suburban and 7 percent rural, though those percentages include people in many small cities and metro areas. Looking only at respondents in the larger principal cities (those with a population greater than 100,000) of larger metropolitan areas (those with a population greater than 500,000), the breakdown was 56 percent urban, 42 percent suburban and 2 percent rural. That means close to half of people who live within city limits describe where they live as suburban.

Because we surveyed only about 2,000 people, we had no respondents in the vast majority of the more than 30,000 U.S. residential ZIP codes. So we can’t conclude anything directly about how residents describe a particular ZIP code. However, using these cutoffs for density and other predictors from our model, and census data on density and other ZIP code characteristics, we were able to classify nearly all U.S. ZIP codes as urban, suburban or rural. Then, for every city, we calculated the share of households who live in ZIP codes that our model, based on survey responses, classified as urban as opposed to suburban or rural.3 Of course the model might classify some neighborhoods differently from how their residents perceive them. 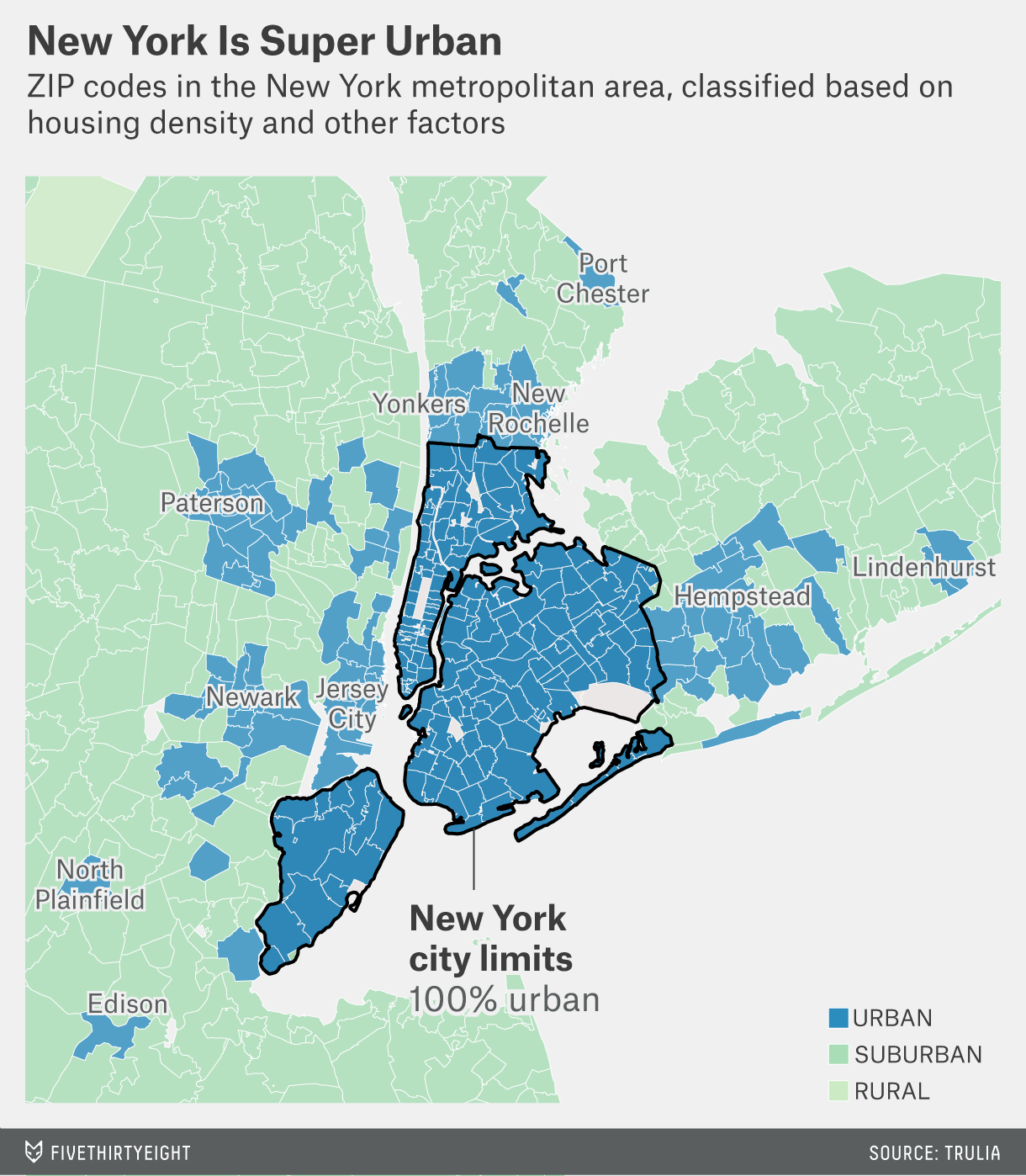 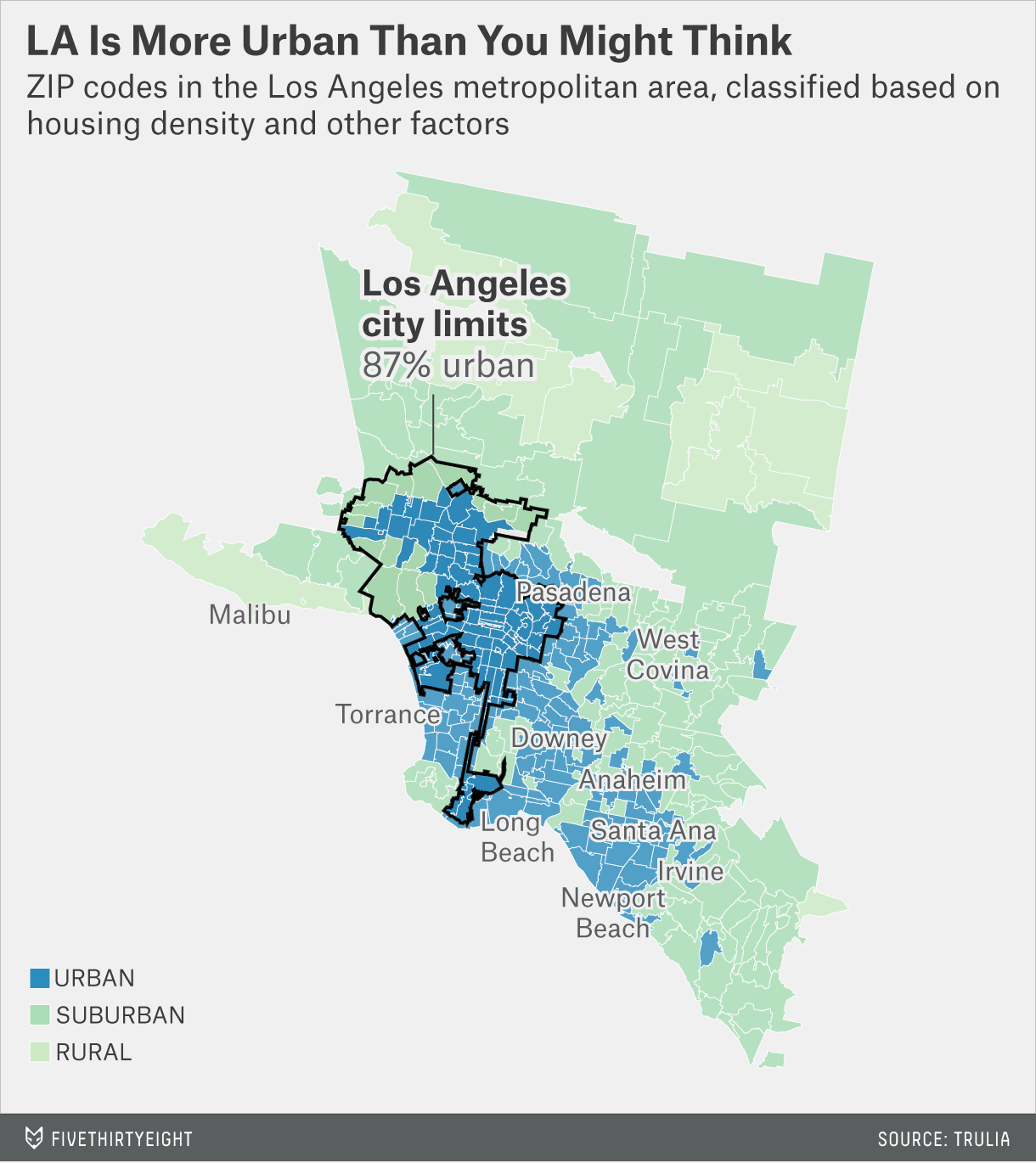 Among all cities with at least 100,000 residents, the correlation between population growth in the past year and urban share is -0.29. That’s statistically significant, but it indicates that there are plenty of exceptions to the general pattern of suburban cities growing faster — there are both fast-growing urban cities (such as Seattle) and slow-growing suburban cities (such as Albuquerque, New Mexico, and Louisville, Kentucky).

City growth, therefore, does not necessarily mean more urban living. In order to understand policing, schools, property taxes and other typical responsibilities of city governments, we need to look at cities as defined by their legal boundaries. But when we’re looking to understand the economic, social and demographic issues facing urban and suburban America, city boundaries can mislead. Looking instead at neighborhoods, classified by their characteristics into urban, suburban and rural, shows more clearly how suburban America — including many of its largest cities — actually is.