The Karner blue butterfly is a tiny thing, with colorful wings that extend just an inch across and a life that rarely wanders more than 600 feet from where it began. Its caterpillars can only eat wild lupines — a flower that’s become less abundant in the wild because of development and habitat fragmentation. As a result, the Karner was named an endangered species in 1992. But Karner blues are getting help from an unlikely source: gun sales.

The Nature Conservancy has a project in the works near Saratoga, New York, that will preserve an area that’s already home to these lupines and butterflies, and much of the program’s funding comes from the sales of guns and ammunition. For that, Karner conservationists can thank the Federal Aid in Wildlife Restoration Act.

Passed by Congress in 1937 and commonly referred to as the Pittman-Robertson Act, it sets an excise tax of 10 to 11 percent on the sale of guns and ammunition, paid by manufacturers at the wholesale level. Prior to the law’s passage, guns and ammunition were already subject to taxes, but the Act ensured that the money was set aside to protect game species and their habitats. The law has helped bring deer and elk back from the brink in areas in the East, but it’s also given refuge to many non-game species, like the Karner blue butterfly. At another project in New York, Pittman-Robertson money is helping to protect 5,000 acres of grouse, turkey and deer habitat, and all the snowy owls and other birds of prey that come with it. Troy Weldy, senior conservation manager at the Nature Conservancy’s New York chapter, said the project “could create a premier birding destination.”

Environmentalists who don’t hunt might not think they have much in common with the guy tromping off into the woods with a gun. Yet hunters and anglers have a long history of land stewardship, said John Gale, national sportsmen campaigns manager at the National Wildlife Federation. At the time the Pittman-Robertson Act was passed, widespread hunting had cleared deer and other big game from large areas along the Eastern Seaboard. Realizing that the sustainability of their pastime was at risk, hunters banded together to urge legislative action. “Hunters are the original conservationists — we’ve been carrying wildlife and fish on our back for a long time,” Gale said.

The U.S. Fish and Wildlife Service distributes Pittman-Robertson money to state agencies. A portion goes to hunter education, and the rest pays for habitat restoration and management. “Without hunter dollars, we wouldn’t have fish and wildlife departments and we wouldn’t have wildlife management,” said Jim Curcuruto, director of industry research and analysis at the National Shooting Sports Foundation.

All together, state agencies responsible for wildlife management receive about 75 percent of their funding from Pittman-Robertson taxes and hunting and fishing licenses. But the share of people hunting has fallen over the last 60 years. In 1960, about 7.7 percent of the U.S. population bought a hunting license, while in 2010 only 4.8 percent did. In absolute numbers, hunting license sales are fairly flat. 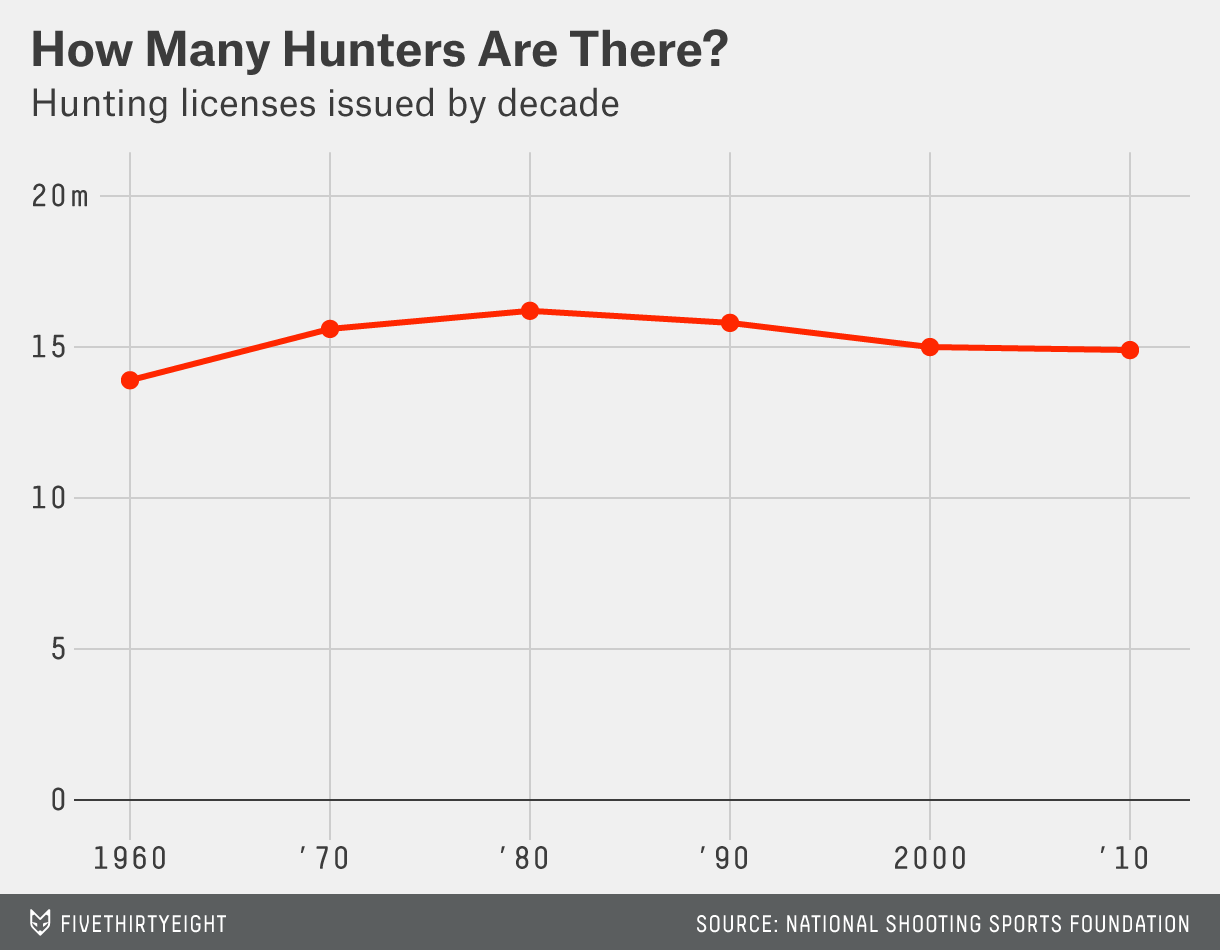 Lucky for butterflies and snowy owls, gun purchases haven’t fallen — they’re skyrocketing — and thanks to a tweak to the law made in 1970, the Pittman-Robertson tax applies to all gun and ammo sales, regardless of whether they’re hunting-related. 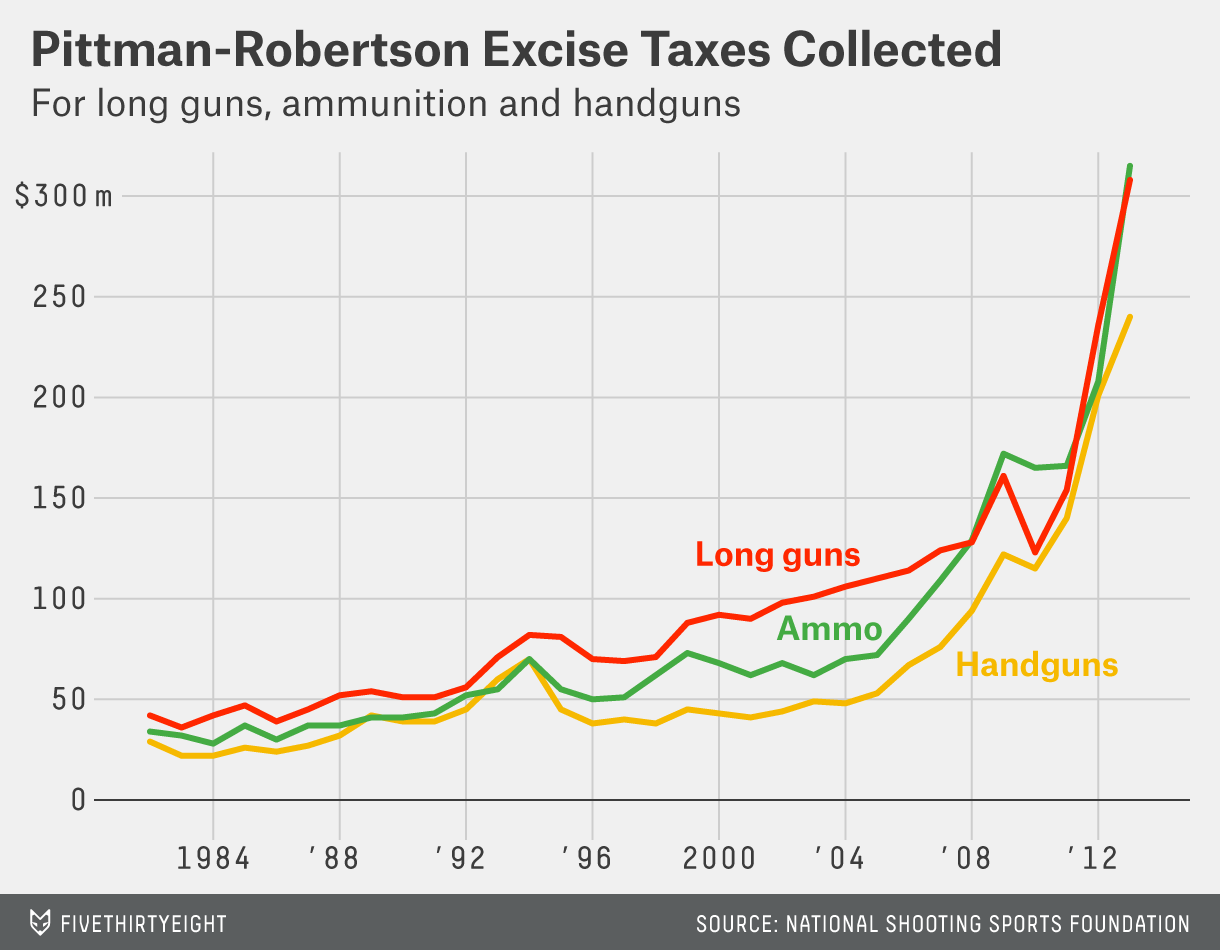 A surge in gun and ammunition sales since 2008 has created a rush of new money for projects like the one in New York to protect the Karner blue butterfly. “We’ve literally more than doubled the Pittman-Robertson fund from 2008 to 2013 and that influx has had a huge positive impact on state wildlife agencies,” Curcuruto said.

In March, the Department of the Interior announced that the U.S. Fish and Wildlife Service would distribute close to $1.1 billion to state and territorial agencies that manage wildlife to fund fish and wildlife conservation and recreation projects. By comparison, the Conservation Alliance, a conservation group funded by the outdoor industry, intends to disburse $1.7 million this year, and the Nature Conservancy, one of the country’s leading funders of habitat preservation, has a total operating budget of approximately $500 million.

The hook-and-bullet crowd isn’t always a natural partner with environmentalists, but even in this era of hyper-partisan politics, the groups’ commitment to healthy habitats gives them a common cause. Whether or not they realize it, land set aside for hunting is often enjoyed by other outdoor recreation enthusiasts such as hikers and birders, too. Statistics from the U.S. Fish and Wildlife Service show that the majority of visits to wildlife refuges are not related to hunting or fishing. “What’s good for elk is also good for songbirds,” Curcuruto said.