It was the middle of April, and the score was tied between the Miami Marlins and Seattle Mariners. It was the bottom of the ninth, the bases were loaded, and nobody was out. Marlins masher Giancarlo Stanton was at the plate against Mariners reliever Yoervis Medina, and Medina was ahead one ball and two strikes, in position to put Stanton away and extend the inning. But then he made a terrible mistake with a breaking ball, and Stanton knows what to do to with mistakes.

That pitch, that was a meatball — a pitch so appetizing a hitter can’t help but think of devouring it whole. And big league batters can eat; they don’t leave many meatballs on the plate.

There’s only a limited understanding of what a meatball is. One general definition: “an easy pitch to hit, thrown right down the middle of the plate.” Major League Baseball’s official lingo agrees. Brooks Baseball defines “grooved pitches” as pitches thrown in the middle-middle of the plate, regardless of movement or velocity.

But there has been no available resource that shows what happens to meatballs when they’re served up. So I looked at 1.7 million pitches over about six and a half seasons since 2008, culled from PITCHf/x and Baseball Savant, and found that off-speed meatballs lead to the kind of slugs that make highlight reels, but fastballs get swung at and hit more often.

I’m defining a meatball as a pitch over the middle of the plate, between the thigh and the belt, and one that doesn’t hang around the bottom of the strike zone (because pitchers often throw low on purpose). So my data set includes pitches over the middle third of the plate, in the upper two-thirds of the strike zone, meaning 22 percent of the strike zone is meatball territory. But not all pitches that land in that area are meatballs. I’ve excepted knuckleballs, whose movement is usually too erratic,1 and also fastballs over 95 mph, under the assumption that at high enough speeds, meatballs don’t really exist. If Aroldis Chapman lays a 100 mph pitch down the pipe, a hitter barely catches a whiff of meat before the ball’s in the catcher’s glove.

This definition includes about a quarter of the homers hit so far this season. But homers aren’t the only reason meatballs are interesting: They’re a vehicle to find out more about a pitcher’s worst mistakes, and how different those mistakes are from his peak performance.

Take the chart below, which shows whether batters are more enticed to swing when they see a meatball coming toward them, as we suspect they are. I’ve split up fastballs and off-speed2 pitches to show how they’re thrown and treated differently. The data is also broken down by how the count looks from the pitcher’s perspective3: “ahead” refers to pitcher-friendly counts4; “behind” classifies pitcher-unfriendly counts5; and “even” encompasses counts where neither hitter nor pitcher is in the power position.6 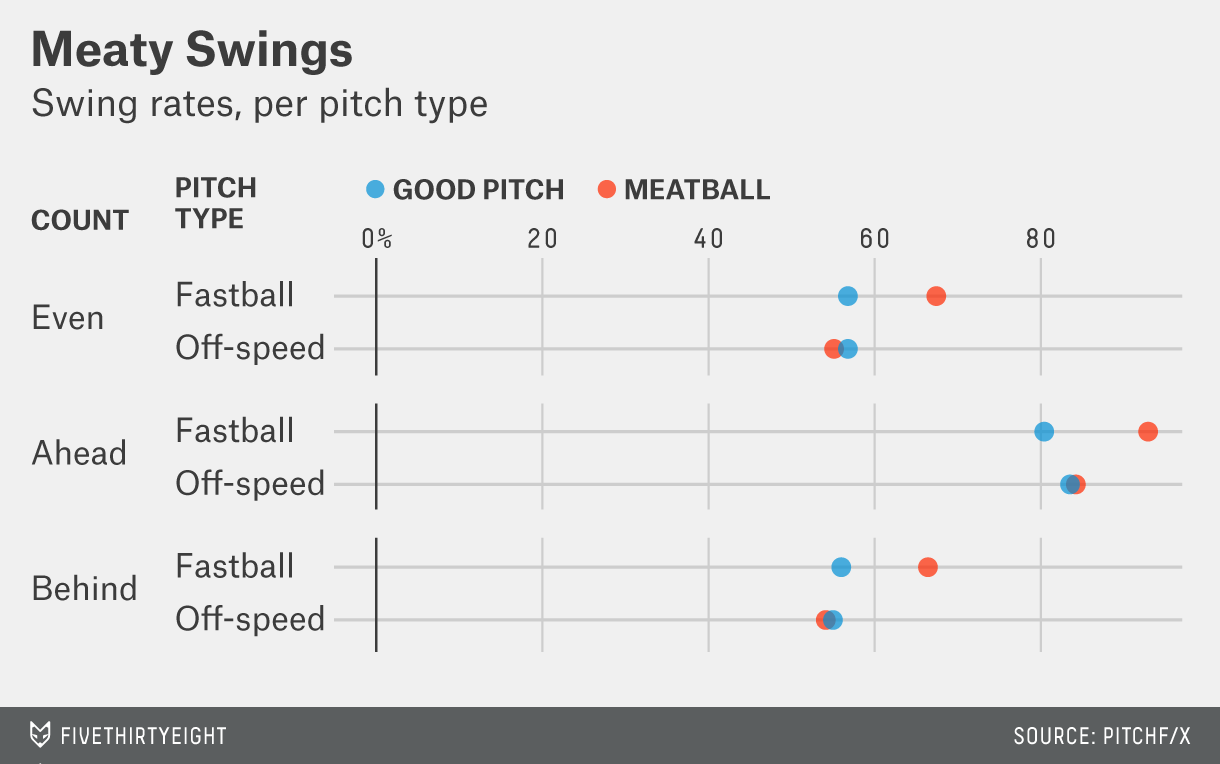 Hitters swing at meaty fastballs, on average, far more frequently than at off-speed meatballs. That feels intuitive, since hitters look for fastballs over the middle, so speedy meatballs are already where hitters expect them to be. With the pitcher ahead, hitters swing at meaty fastballs 93 percent of the time, but at non-meaty fastballs 80 percent of the time. We don’t see these gaps with off-speed pitches. In every case, the rates are just about even, suggesting that breaking balls, on average, may be as deceptive when they’re meaty as when they’re not. Alternatively, batters might not be able to track off-speed pitches as well as they track fastballs.

Swinging is one thing, but we mostly care about swing results. We can also look at whether hitters make contact with meatballs more often. 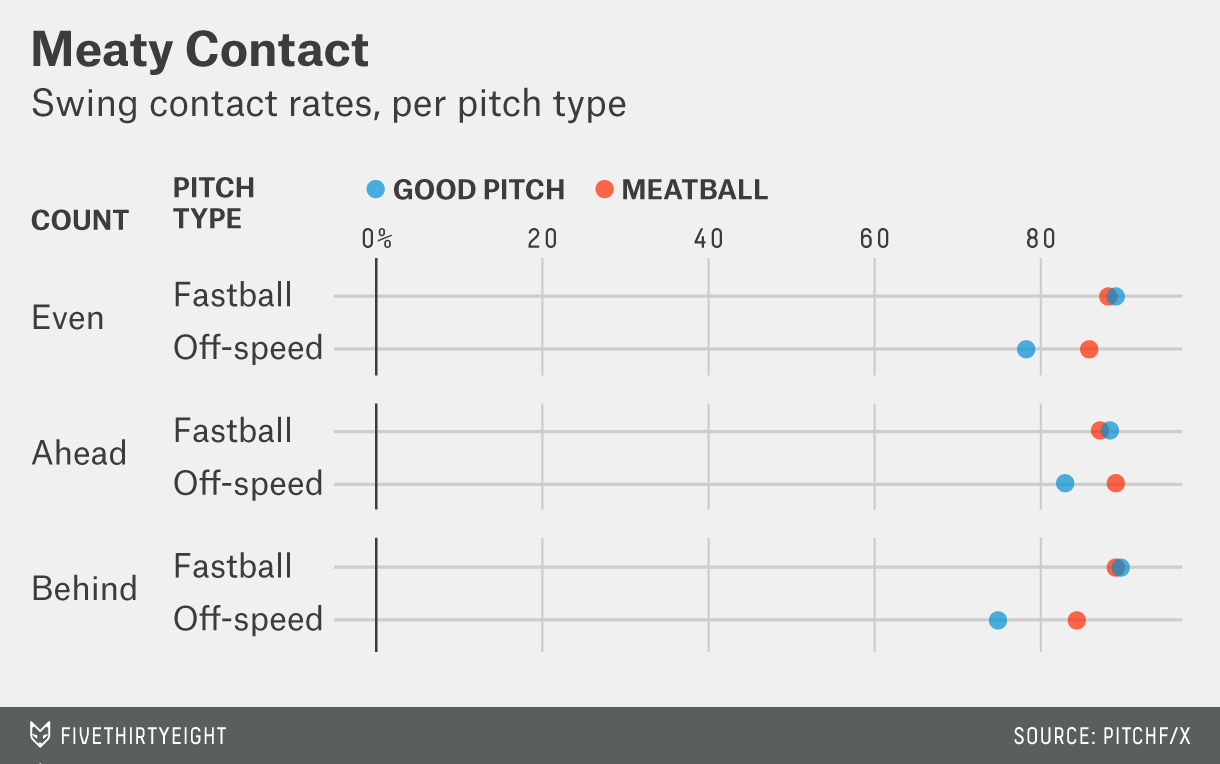 When hitters are swinging at off-speed pitches, they’re doing better on the meatballs. In every case, fastballs are struck somewhere between 87 percent to 90 percent of the time. But with off-speed stuff, there are clear differences in the contact rates — the mistakes are getting hit. There’s a reason hanging breaking balls have a bad reputation.

So we know that hitters like to swing at fast meatballs and make better contact on off-speed meatballs, but what really matters is which bad pitches are most exploited. 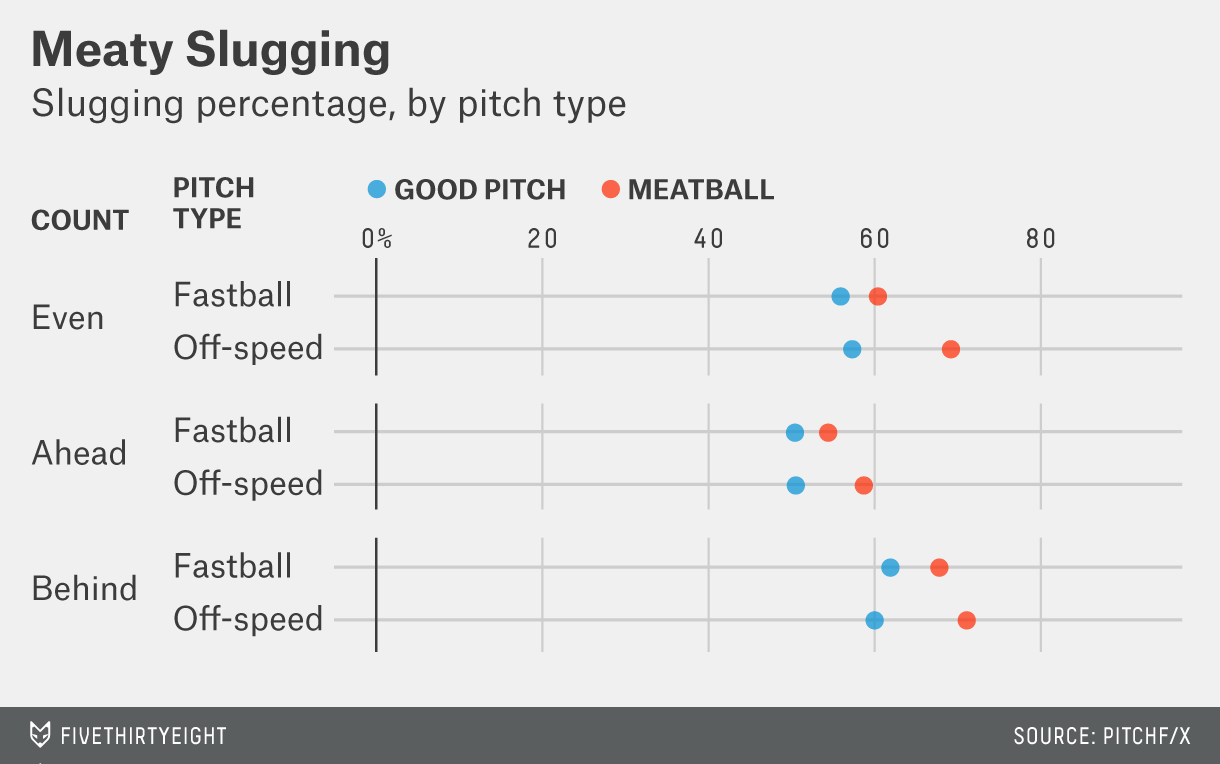 It’s no surprise that meatballs are turned around with more success than other, higher-quality strikes. What’s interesting is the extent to which that’s true. The biggest difference is with off-speed pitches in even counts — meaty ones have yielded a slugging percentage 119 points higher than non-meaty ones. In those situations, hitters are neither sitting on a fastball nor looking to swing at anything close.

Of course, my analysis isn’t perfect. Meatballs and non-meatballs could probably be separated with greater purity, given infinite hours of time, and a meatball to Giancarlo Stanton doesn’t work the same as a meatball to Ben Revere. Under few circumstances should a pitcher ever want to throw a pitch up in the zone and down the middle of the plate. But as the evidence shows, most meatballs still don’t get punished. Pitchers get away with the majority of their mistakes because hitting is incredibly difficult and the fate of a mistake depends in part on the context. The way pitches are woven together can make a pitch down the middle surprising and effective, even if it wasn’t actually supposed to go there.

What a meatball really is presumably changes with every situation. Meaty pitches are hit out of the park more often than non-meaty pitches, and the biggest difference is, yet again, with off-speed pitches in even counts, where a meatball is almost twice as likely to be hit out of the park as a non-meatball. (Note that these home run numbers were included in my earlier slugging-point analysis.)

But all types of meatballs hurt somehow. The off-speed ones aren’t swung at as often, but when hitters do make contact, they’re clobbering the ball. The fastball variety, meanwhile, do entice a hitter to take a swing, leading to a ball that’s more likely to find its way around the defense. And whether it’s a fastball or an off-speed pitch, meatballs are still the most homer-friendly pitch I’ve seen.

The more I looked into the meatball, the more it confirmed my suspicion: no matter the particulars, it’s the bad pitch we assumed it was.

Jeff Sullivan is an editor and analyst at FanGraphs and a Seattle Mariners supporter. @based_ball