Over at Firedoglake, Marcy has questioned some of my assumptions regarding the financial situation of her hypothesized family of four making $66,370 per year and trying to purchase health insurance under the Senate’s bill. That’s only fair, since I questioned some of her assumptions. So let’s go line by line through her budget, and try to reach some consensus as to what this family is in fact likely to be spending in health care and other areas.

Taxes: Marcy doesn’t get into the details here, but her 13% estimate is still too high. This family is going to get a bonanza of tax credits: $2,000 in tax credits for having children, about 20% off their cost of child care, deductions for mortgage, health care, and probably other expenses — particularly if one or more members of the family is self-employed, as will frequently be the case for those on the individual market. While some of those credits will be accounted for in the average tax burden she draws from per the Urban/Brookings data — meaning, it’s not as straightforward as just deducting those figures from her totals — this family is liable to receive an appreciably above-average number of tax breaks. Also, although this is a minor point, she’s exrapolating a 13% marginal tax rate from the table for a family making $78,767; for a family making $66,370, the average effective federal tax rate should be closer to 12%. But since this particular family should be paying a below-average marginal tax rate relative to their income bracket, we’ll assume that federal taxes will in fact total 10% of their income. We’ll keep state taxes the same since Michigan is reasonably forgiving for a family in this income tier.

Food: Marcy suggests her initial estimates may have been too low and I agree — let’s up the family’s food budget to $9,000.

Housing: This is still the most significant difference — I had figured housing costs at about $10,000 based on BLS data, versus Marcy’s estimate of $19,275. Marcy points out that the a higher propotion of people in the BLS dataset I used will have paid off their mortgage, but that’s still just one-fifth of the BLS’s sample, so it’s not going to make a huge difference. But let’s bump up my estimate to $12,000 — or an even $1,000 per month — to account for this, as well as for the fact that a family with two children might want some extra square footage.

Transportation: Marcy’s per-mile estimates are fairly reasonable, although note that both her and my estimates were from 2008, a year in which gas prices were especially high. But most families won’t drive quite this much. Let’s simply split the difference between the BLS’s $9,359 estimate and Marcy’s $13,200, which yields $11,280.

Utilities: Marcy suggests her initial estimates may have been too low and I agree — let’s up the family’s utility budget to $3,000, slightly above the BLS estimate of $2,823 since a family with two children will likely consume a somewhat above-average amount of electricity.

Telecom: Marcy’s initial estimate was $1,200; the BLS data suggests the costs would in fact be somewhere between $1,253 and $2,394, depending on how much of the costs of cable television are included in the category “audio and visual equipment and service”. On the other hand, cable is a fairly discretionary expense — especially in the age of Hulu — so I’m not sure it belongs in the “above the line” estimate. In any event, let’s bump our estimate up slightly to $1,500 per year.

Child Care: Marcy’s data says that pre-school care costs $6,216 per year, and infant and toddler care costs $7,936 per year. Assume that each child needs three years of infant care and three years of pre-school care out of an 18-year childhood. If that’s the case, the family will spend $2,358.50 per year per child on average, or $4,717 on average for two children. Also, while Marcy asserts that her estimates are high, not all families will have to pay for day care. Even if both parents are working, some families may be fortunate enough to have a free or discounted child care program available to them via a church, employer, or municipality, or may have older relatives living nearby to take care of the children during the daytime. Or, if one or more of the parents works from home — which will be the case fairly often for someone in the individual market — they may be able to take care of the toddlers themselves and still earn a paycheck.

Health Care: We’re both assuming $5,243, or 7.9% of income, which is the highest amount this family would have to pay for premiums under the Senate’s bill before the individual mandate penalty would be waived.

So, this is how I come to the conclusion that Marcy’s expenditure estimates are about $10,000 too high: I have this family spending $54,682 per year, including taxes and their health insurance premiums, versus $64,279 per Marcy’s numbers. Therefore, I have this family having $11,689 left over whereas Marcy has them with $2,091. 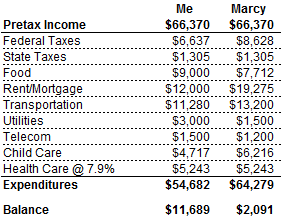 Then there’s something strange that Marcy does, which is to use the BLS estimates for health care expenditures. The reason you can’t do this is because overwhelming majority of people in this income tier will have the cost of insurance paid for by their employers and some others are on Medicare — neither of those things will show up in the BLS data. Also, as Marcy has pointed out, the average family in the BLS dataset has 2.7 members whereas our hypotheized family has 4.0, which further lowers the cost. These factors obscure the BLS estimates profoundly to the point that they’re simply noninformative.

And without stringent out-of-pocket caps, as would be implemented under the Senate’s bill, the downside risk remains very high to this family. Or, they may not be purchasing health insurance at all, in which case they’ll save a little bit of money in some years but lose a lot of money — and perhaps their livelihood — in years where a member of the family gets sick.

I don’t want to get drawn into a sematic debate about what is “affordable” — particularly when I agree with Marcy that the health insurance for working families should be made more affordable before President Obama signs this bill. Certainly, if you use my estimates for this family’s expenditures, most people would define the coverage as being “affordable” — it fits into their budget and leaves them with some money left over, even after a significant allowance for out-of-pocket expenditures. Marcy’s initial estimates would obviously put “affordability” strongly into question — but they’re significantly too pessimistic. The areas where she was leaning high, especially housing, significantly outweigh those where she was leaning low, like food and utilities.

And what’s unambiguous is that the Senate’s bill makes the coverage much more affordable than the status quo. If we were to accept Marcy’s estimates, and this family had to pay $12,680 for family coverage on the individual market, they’d run a deficit of $5,346 per year — before out of pocket expenditures. That’s not affordable. Or, more likely, they’ll choose not to provide coverage for their families at all, with all the financial and physical risk that entails.

There’s simply no way that you can provide $6,000 or $7,000 per year in subidies to a family like this one, for insurance that has an actuarial value of 80-85%, and leave them worse off — not unless the family has better genes than Brett Favre. For a family that’s already purchasing health insurance, this is literally free money. For one that isn’t, it’s substantially reducing their long-run health care expenditures while also evening out their risk.