The results of the recall election in Wisconsin on Tuesday night may tell us something about the future of the labor movement and the salience of collective bargaining rights as an issue to swing voters. A win by Gov. Scott Walker, who is ahead in the polls, might make other Republican governors who have sought to pare collective bargaining, like John Kasich of Ohio, breathe a little easier when they come up for election again.

But one thing that the recall is unlikely to do is tell us much about how the presidential contest in Wisconsin is likely to evolve in November. The politics for a governor’s campaign are often subject to different currents than presidential ones, and historically the party identification of a state’s governor has said little about how presidential candidates will fare there.

Over the past 40 years, in fact, the relationship has run in the reverse direction than you might expect. The Democratic presidential candidate has typically done a little better when the state’s governor is a Republican, and vice versa.

In the chart below, I’ve listed the popular vote margin in presidential elections since 1972, based on whether the governor of the state was a Democrat or Republican at the time the presidential vote took place. The values are weighted by the turnout in each state, so larger states like California have more influence in the calculation than smaller ones like Wyoming, just as they do in the overall presidential contest. 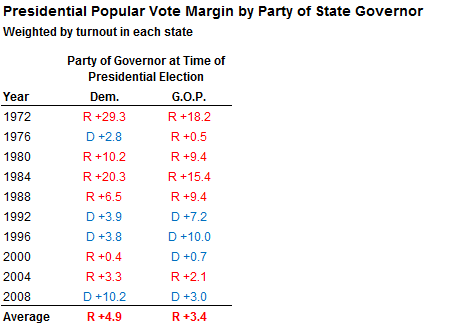 In other years the differences have been more modest, or have run in the more intuitive direction. In 2008, for example, President Obama won states with Democratic governors by an average of about 10 points, against a 3-point margin in states with Republican ones.

Still, in the past 10 presidential elections as a whole, the presidential candidate has done a point or two better when the governor of the state is of the opposite party.

An alternative might be to look at the change in the presidential vote from one election to the next, which might do a better job of capturing the shifting dynamics in each state. However, this tells largely the same story. On average, the Democratic presidential candidate has lost two points from the previous election when the governor of the state is a Democrat, while making slight gains when the state’s governor is a Republican. 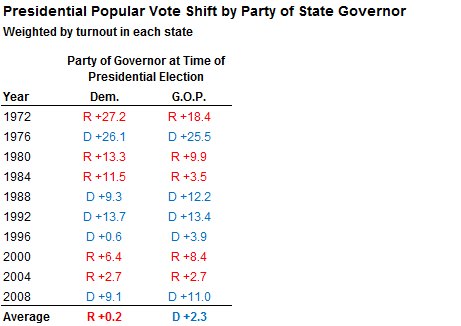 This latter pattern held true even in 2008. Although Mr. Obama did better overall in states with Democratic governors, he gained slightly more ground relative to John Kerry’s margin — adding 11 points rather than 9 points — in states with Republican governors.

What’s going on here? Causation, of course, is more difficult to interpret then correlation. The shift away from voting for Democrats in the South, which began in 1964 at the presidential level, was much more sluggish in races for governor and other statewide offices. In 1988, for instance, there were still Democratic governors in many southern states like Mississippi, Louisiana, Kentucky and Tennessee, but Michael Dukakis did not win any of those states. This Southern shift can often dominate other factors in historical analyses of trends in presidential voting.

The other hypothesis, which is interesting to contemplate but would require a more thorough analysis to demonstrate, is that voters seek to engage in a certain degree of electoral balancing. If they know their state is going to be run by a Democrat — remember, most states do not hold races for governor in presidential election years — they might be more willing at the margin to contemplate voting for a Republican presidential candidate, and vice versa.

So should Mr. Obama actually cheer a victory for Mr. Walker? I certainly wouldn’t go that far. And even if the recall election is largely irrelevant to the presidential race, it could be a leading indicator for elections where circumstances are more similar to Wisconsin, such as elsewhere that an incumbent Republican governor is on the ballot.

Still, the very same polls that have shown swing voters breaking for Mr. Walker in Wisconsin have found some of the same voters planning to vote for Mr. Obama in November. Some of these may actually be “pro-incumbent” voters who view the economy as having improved. Alternatively, Reince Priebus, the chairman of the Republican National Committee has noted, some independents and even Democrats might be mildly unhappy with Mr. Walker, but think recalling him from office early goes too far.

The reality of the presidential race is one thing, however, and the perception is another. The Romney or Obama campaigns could either react to the recall results by putting more resources into Wisconsin or by pulling them out. Those choices affect the outcome in November.

But they wouldn’t do so without exerting a strategic price elsewhere. Current polls of the presidential race in Wisconsin find Mr. Obama performing a few percentage points better there than he is in the country as a whole, an outcome that is typical for Democratic candidates in Wisconsin in recent years. The state could nevertheless be competitive, particularly if Mr. Obama’s overall standing deteriorates.

However, Wisconsin may not be as close to the electoral tipping point as other states like Ohio, Colorado or Virginia, where state polls are tracking the national numbers more precisely. Resources spent in Wisconsin could trade-off with those in these states, where a victory might be more likely to flip the entire election.